We started in January with Conan the Barbarian (see our stream of consciousness rewatch here) and then followed it up in February with TRON (look back on its legacy here). In March we reminisced about The Secret of NIMH, a classic fantasy from the legendary animator Don Bluth (click here to read all about it). In April we talked about the forgotten gem The Sword and the Sorcerer (we reflect on its overlooked history here), and last month we celebrated the great Jim Henson passion project, Dark Crystal (read all about it right here). Last month we reflected on the beginning of a quintessential eighties franchise: Rambo.

This month we look back on another Sylvester Stallone hit, Rocky III. 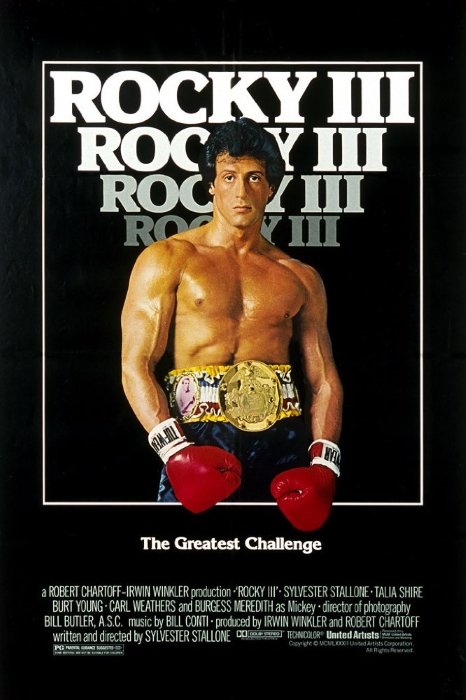 Up until 1982, Stallone was known for two things: (1) Rocky and (2) flopping in every other movie not named Rocky. 1982 would bring him Rambo (First Blood) and save his career from being forever linked to just one character. In that same year Stallone returned to the series that made him famous and redeemed the disappointment of Rocky II.

Let’s start there: Rocky II never should have been made. It’s one thing to continue a story that began with a previous film, but when the sequel’s story simply retreads the central drama of the original, you’re going to meet resistance. When the story takes the original’s drama and cheapens it, you’re really going to have problems.

The original Rocky is a brilliant bit of drama; upstart boxer from the slums dreams of “just going the distance” with the heavyweight champ. That line (“all I wanna do is go the distance”) is the plot of the movie, which is why, when Rocky fails to win the title at the end, it’s okay, because that wasn’t his “hero’s journey.” All he wanted was to prove he belonged, and by going the distance (and ending in a draw) he did that. The movie even hammers that point home when, as the final bell sounds, both Apollo Creed and Rocky tell each other “no rematch.” They proved all they needed to prove.

And then in Rocky II they rematch and Rocky wins the title.

Was it nice to see the hero win the big one? Sure, but it cheapened the story that was so perfectly told in the original. When it came time for a third movie, Stallone turned to a different direction and recaptured the magic of the first.

The beauty of the Rocky movies is not in their multi-layered and surprising plots. The stories are always simple and it’s the acting that carries them. Rocky III tells its whole story in the opening montage. The five minute sequence, set to the now-classic “Eye of the Tiger,” shows Rocky basking in the fame and fortune that comes with being Heavyweight Champ. He boxes a few fights (against opponents we will find out were paper tigers), but mostly throws pretend punches at ribbon-cutting ceremonies, car dealerships and in TV commercials. Cameras flash as he grins on the cover of magazines, hosts the Oscars and even guest stars on The Muppet Show. At the same time, another boxer, Clubber Lang (great name), trains and boxes his way to the number-one contendership.

There are a lot of montages in the film, as Stallone said that the knew he didn’t have much meat in the plot and wanted this film to focus on the training and fighting, and less on the personal conflicts that the previous movies dealt with. But as far as I’m concerned the best montage is the first, and the star of it (as well as the movie) is Clubber Lang.

Lang is first seen without any introduction. He appears as a face in the crowd, looking royally angry as Rocky schmoozes during a photo-op. As the montage continues, Lang goes from an extra, to a cameo, to a co-star to, by the end of it, the focus of the short story. While Rocky is basking in the comforts and afterglow of championship success, Lang is training to dethrone him. The way the story is told, without any dialogue, is so perfectly-edited, the sequence could have ended with Lang uppercutting Rocky and winning the title and it would have made perfect sense, without any explanation needed for the audience. It also would have been an Oscar-worthy short film.

It’s funny, because you could argue that the opening montage basically summarizes the first half of the movie (Rocky relaxes, Clubber trains and the champ is primed for defeat) making it ultimately redundant and pointless, but I’d argue that the opening montage is so well done it almost makes the actual movie that follows redundant. Everything we see in those opening minutes is re-explored in the next forty-five. Rocky’s relaxed championship reign is illustrated by a “charity fight” with “wrestling’s heavyweight champ,” the seven-foot tall “Thunderlips.”

Hulk Hogan’s performance is wooden but it’s got a retro charm you can’t help but love, and it’s impressive to see him tower over Stallone (he was a foot taller, though not the actual “seven footer” they billed him as in the movie) and it was fun watching a cinematic take on a pro wrestling match. There’s even a wooden chair broken over Thunderlips’ back (which he no-sells, naturally).

Lang watches the wrestling spectacle like Moses watched the party around the Golden Calf. As far as he’s concerned, Rocky is a disgrace to the sport and doesn’t deserve the title. While it’s easy to instantly root for Rocky, Mr. T does such a phenomenal job in his film debut you can’t help but sympathize with his story. He’s an braggart, but he backs it up. He’s a jerk, but he’s also hungry. Were it not for one line, when he hits on Adrian and offers to show her what a “real man” can do (a line which prompted Mr. T’s mother to walk out of the premiere, ashamed at her son’s ill manners), there would be nothing unredeemable about him. It’s only because Rocky is the presumed hero that we naturally gravitate toward rooting for him. But objectively the guy to root for is Lang! 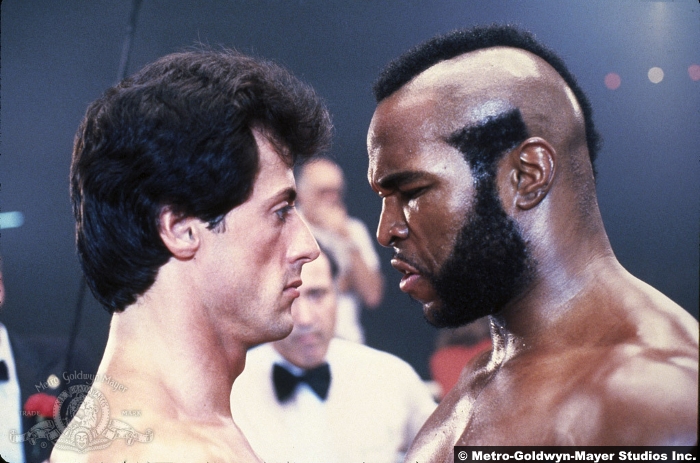 After Rocky finally agrees to the fight, we see a dual training montage and it couldn’t be more contrasted. Unlike in the original, where both Creed and Rocky train with sweat-drenched fervor, this time it’s only the challenger who takes the fight seriously. Rocky trains in the middle of a circus of onlookers, photographers and fans and never fails to stop for a wink, a smile and a kiss.  At the same time, Lang is filmed in a dimly-lit, drab grey box of a room, not unlike Rocky’s old training grounds.

Tell me again, whose the hero?

When the fight is over Rocky not only loses his title and his pride but also his manager.

Humbled and finally snapped back to reality, he trains for a rematch with help from his frenemy, Apollo Creed. We get one last big montage, featuring the now-infamous slo-mo not-jump in the water…

I still don’t know what they were going for here. I think maybe they wanted a mid-air chest bump and mis-timed the jump, so they ended up just sort of holding each other and hopping.

Rocky and Clubber Lang rematch and Rocky, sporting Creed’s stars and strips shorts, finally knocks out the champ and proves he was worthy of his title all along. The conclusion works where it didn’t in Rocky II, partially because it all happens within one story, and also because it becomes a story of redemption and not, as in the previous movie, a glorified “do-over.” 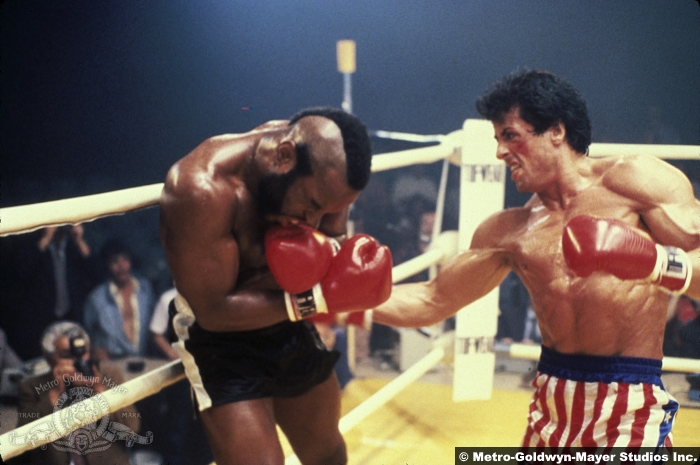 After struggling to branch out after the original Rocky, 1982 would be the year Stallone proved he was more than a one-hit wonder. First Blood proved he could be a versatile action movie star and Rocky III proved he could be a writer, direct and star in a movie that was not only a hit, but a well-made piece of cinema, tightly-edited, well-acted, and smartly told.