After a year or more being marketed as “The Woods,” Lionsgate suddenly revealed a few months ago that their terrifying-looking film was actually a surprise sequel to 1999’s genre-defining classic: The Blair Witch Project. This led to confusion and speculation that perhaps the movie was co-opted by producers and turned into a Blair Witch sequel late into development. Such a move is surprisingly easy to do: A little sly editing and a few key reshoots and you can turn one movie into another without the audience ever noticing the change was made (this year’s biggest animated hit, Zootopia, saw an 11th hour adjustment where even the main character and focus of the movie was changed). It turns out, however, that this movie was—from conception to release—always going to be a Blair Witch film. The dummy title “The Woods” was just a way to hold off on the big reveal for as long as possible. Once the advance screenings took place this summer, however, the jig was up and the announcement was made.

Lionsgate may have been nervous about a year and a half of “Blair Witch” marketing, knowing that too often hype for long-anticipated sequels fails to match the quality of the film. Instead we’ve only had about three months to digest the idea of seeing the first true sequel to the “found footage” hit (one of the most profitable movies ever, with a budget of less than a million and a box office haul of 250 million). Now that it’s out does it live up to the legacy of the first? 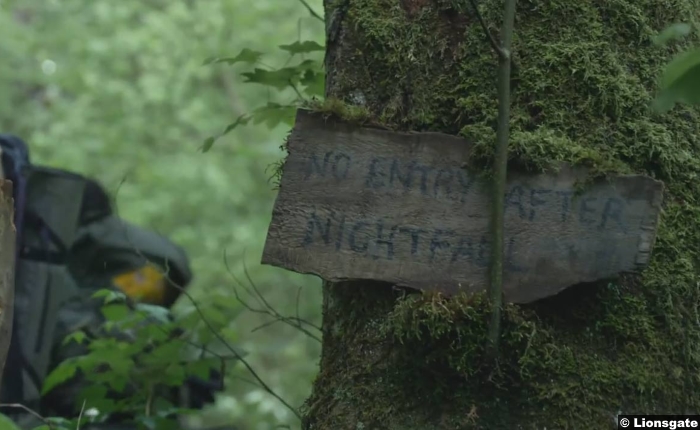 The original movie was a juggernaut. If you weren’t around in 1999 you really can’t appreciate it. The internet was not as pervasive 24/7 in our culture as it is now. High Speed internet was still in development which meant that if you wanted to watch a video on the internet you were going to be waiting a loooooong time for it to load. The Blair Witch Project (henceforth BWP) could only have worked in the late-90’s. Just a few years later it would have been a “very good” horror film that made sixty million or so and then disappeared. Instead, because instant access to things like Snopes, Wikipedia or even Google (which was a year old but no one used it), were nonexistent, a sizeable number of people really did believe the footage was real.

There were newspaper articles, online videos of (staged) interviews and more all devoted to discussing what “really” happened in those Maryland woods. The Sci-Fi channel aired a mockumentary promoting the movie, entitled “Curse of the Blair Witch.” It was no different in tone than any of the other TV shows that aired occasionally, highlighting some urban legend in some small New England town. It was plausible, which is why people quickly bought into it. Eventually it got out that the film was shot for the purposes of making a movie, but when you’re a kid at school, such a revelation is quickly spun into: “They just shot a remake of the actual footage they found.”

Today “found footage” movies are an entire sub-genre; BWP essentially launched it. We had no frame of reference. What we saw was raw, clunky and real. People vomited in the theater because they were unprepared for the jerky camera movements. People walked out halfway through because they thought it was all an elaborate prank. Those who stayed—those who endured—were treated to a satisfying payoff to the teasers and hints the movie opened with.

Because it was such a talk of the town, everyone—fans and skeptics alike—went to see it, again and again.

Knowing they had a hit on their hands, Artisan Entertainment quickly tried to cash-in. Books and video games were hurried into development, designed to explore the mythology of the film, and barely a year later a sequel was rushed to theaters: Blair Witch 2: Book of Shadows. The movie had little to nothing in common with the original; it held on to the title and that’s about it. Artisan had hoped to develop the series into an “anthology” franchise, where each film had a different plot and cast. For some reason Hollywood keeps trying to do that when they stumble upon a hit horror movie (Halloween tried it and it bombed; Friday the 13th almost did it and it would have bombed). After the disaster of Book of Shadows, and the widespread confirmation that the original wasn’t some taboo snuff film but instead was just a well-made indie, interest in BWP dropped off the map.

Over the years the original developed a “its cool to hate it” reputation and the rise of countless other “found footage” movies (some which just knocked off the concept and others which went far beyond what the original low-budget BWP was able to accomplish) made the movie obsolete.

After 15 years we have a sequel, but even though the timing is predictable (everyone is doing a reboot, sequel, remake, etc. these days) the idea behind doing the movie was actually good-hearted: Director Adam Wingard (who masterminded the V/H/S horror series) spent years wondering when the creators of the original BWP were going to get around to a sequel. That anxious interest turned into an opportunity to make one himself. So at least we have a movie that the people making it wanted to do for the sake of it, and not as a naked cash-grab/tie-in to an existing franchise. 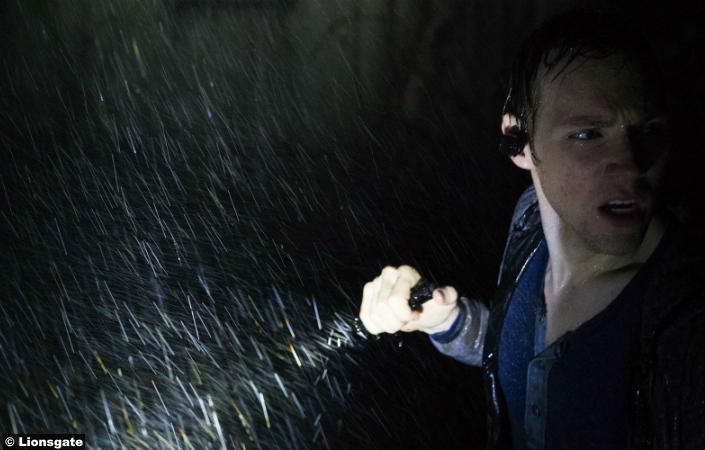 Unfortunately—and apparently intentionally—Wingard decided to follow the modern template and make this movie a quasi-sequel/reboot. Which means if you were hoping this movie would break new genre ground the way the original did, you will be disappointed. The movie does move the story forward, but only barely. It is packed with creepy, atmospheric scares, but for 2/3 of its 90 minute runtime there’s little here that hasn’t already been seen. And I don’t just mean “we’ve seen it in countless other Found Footage movies.” I mean “we’ve seen this—and better—in the original BWP.”

A lot of people are comparing it to The Force Awakens, but while that movie recreated a lot of the feel of A New Hope, as well as a some key story beats, the plot was entirely new, the setting was entirely new and new concepts were peppered throughout the experience.

With Blair Witch, you have a movie that technically moves the story of the first film forward, but it does so by essentially retreading all the same steps of the first movie and then taking two steps forward at the end. Much like the labyrinthine woods of the two films, you will walk in a big circle, going nowhere and then suddenly end up somewhere new moments before it’s all over.  It’s well made but ultimately frustrating.

The plot takes place in the modern day, fifteen years after the events of the original. The central character of the first, Heather Donahue, is presumed dead (we never actually see her or either of the other two characters, die in the original) and her brother has grown up obsessed with finding out what happened (and, potentially, finding her). Whereas the first one spent a lot of time showing interviews with local townsfolk, to set up the mythology of the Witch and debate whether or not it is real, this movie knows you’ve seen the first one. It knows you know the Witch is real. Therefore it wastes little time getting you into the action. The only setup we’re given is an introduction to the campers and the local couple that guides them through the woods. Within twenty minutes you’re in the woods at night and stuff starts going down.

The unfortunate trade-off, however, is that a lot of the slow-bubbling tension of the first film is abandoned. In the original, a lot of time is spent observing the breaking down of the trio’s self-confidence. They lose their way, lose their map and eventually lose each other. As that happens, the scary events slowly ratchet up. First nothing happens, then minor things like twigs cracking in the darkness happen. It’s a full three nights before things get really hairy, and four nights before one of the trio goes missing. All told the trio spend almost a week in the woods before finally meeting their end inside the mysterious cabin.

In this movie, the group hears noises on their first night, a person disappears as quickly as night two and one day later they’re at the fated cabin. Everything happens so much more quickly, with all the subtle ratcheting up of fear the first one had being replaced by sudden LOUD NOISES followed by eerie silence and then more sudden LOUD NOISES on and on and on. The first hour of the movie is just that over and over until they reach the house and the final act sprints to its conclusion. Again, it’s not poorly made, it’s just ultimately hollow. A few additions are made to the Blair Witch mythos, particularly with regards to the Witch’s ability to manipulate time itself, but these are crumbs when audiences spent 15 years hoping for a full meal.

The final thirty minutes however, nearly make it all worth it.

Whereas the original film spent a total of four minutes inside the cabin, this movie focuses on it for the entire third act. It’s a terrifying spectacle, with claustrophobic framing and tight editing. If the whole movie had been this good it might have saved the picture. The cabin is a twisted haunted house, with Escher-like properties (one character wiggles and worms downward through a tunnel in the basement only to end up…back in the basement). There are surprises and reveals, and though little of the mythology is actually explained, there are some things that happen that clearly had a purpose that wasn’t meant to be dwelled on. A sudden bright light and weird sound effect will have your head swimming with questions. And that’s great; I don’t always need answers if the movie raises questions in just such a way that I get to enjoy debating the possibilities. The final half-hour or so does that.

The first hour does not. 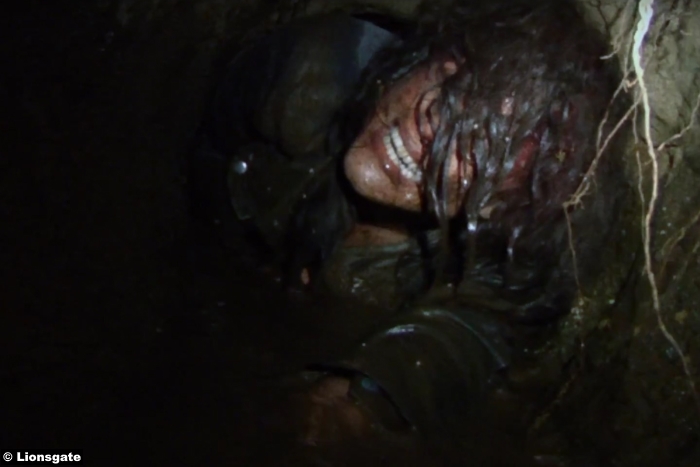 My score: 7/10 -2/3’s of a good horror movie you’ve seen (better) before. 1/3 of a great horror movie you wish you could have seen more of. Check out Salome’s review of the film here: Review: Blair Witch

It’s not quite a sequel (2/3’s of the movie is basically a rushed-through remake of the original), and it’s not quite a remake (it continues the story, while treading very little new ground), Blair Witch is a curious example of parallel filmmaking. Wingard has remade the original under the guise of a sequel. You might think that makes it a “reboot” (like The Force Awakens or, to a lesser extent, Jurassic World, and…to an even lesser extent, Independence Day: Resurgence) but those movies had obvious storylines in place for a sequel. Those are “franchise” movies, where the franchise got “rebooted.”

Can Blair Witch really be turned into a franchise? Where could it go from here? How many times can we watch a bunch of idiots go into haunted woods and slowly be killed? The story has to evolve and move forward (more than the inches it did this time), but it’s hard to see where it does in a way that retains what made the original so good.

If you’re a fan of the original, give it a shot. If not, wait for home video.