Welcome Cult readers to a year-long series looking back on some of the best movies from one of cinema’s best years ever: 1982. Thirty-Five years have passed but the films released in that magical year are still being watched and enjoyed today. Some of these movies are classics that earned big money at the time and have endured over the years. Others are minor hits (or even flops) that managed to find a second life on home video and late night cable. One or two might be movies you’ve never heard of but which nevertheless deserve to be rediscovered after disappearing soon after their release.

Up first is a movie synonymous with the term “cult classic.” In 1982 Arnold Schwarzenegger was a near-total unknown, famous in bodybuilding circles with only a few minor film and TV appearances to his name. Before 1982, his most high-profile appearance came in the documentary Pumping Iron. He had previously acted in a 1969 B-movie “Hercules in New York” (billed as “Arnold Strong”) but at that time his acting was so bad, his accent was so thick and his English was so poor his lines were hilariously overdubbed. It’s one of the few films Arnold ever openly expressed regret in making.

It wasn’t until 1982 that he received his first big break, a starring role in an epic fantasy film (and surprise box office hit): Conan the Barbarian. If you’ve never seen it, and if you love big cornball fantasy movies, this really needs to be in your wheelhouse. 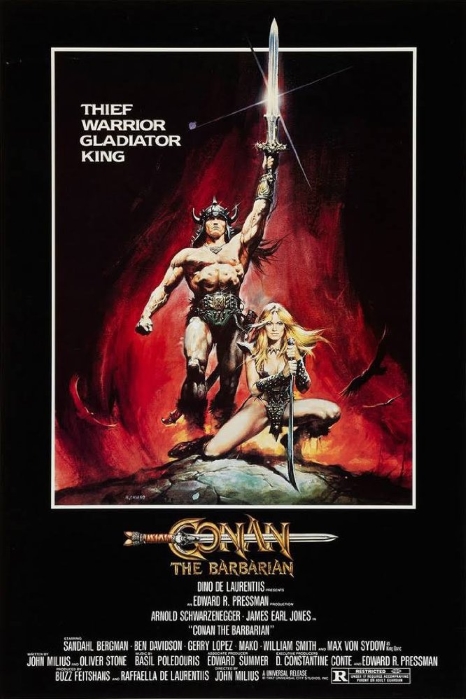 Below are my thoughts on the film, in real time, as I watch it for the first time since I was a child…

The movie—set in an ancient land time “in the time of Atlantis”—begins with a quote by 19th century philosopher Nietzsche. If that is too stupid and nonsensical for you, then this movie isn’t for you. But if you like things that are so dumb and absurd they are hilarious and good, then buckle up.

There is a monologue spoken over a black screen where the narrator promises you a film of “high adventure.” After that we’re given a silent montage of someone making a sword, which would have been the perfect montage to have the previous narration talking over.

Oliver Stone co-wrote this cinematic fever-dream, by the way. I don’t know if that’s ironic or not.

We’re first introduced to Conan as a child, sitting next to his father, being told the history of the world or something. It’s kind of hard to keep up with the dialogue because you’ll spend most of the scene staring at his dad, absolutely sure he’s played by Bruce Jenner. 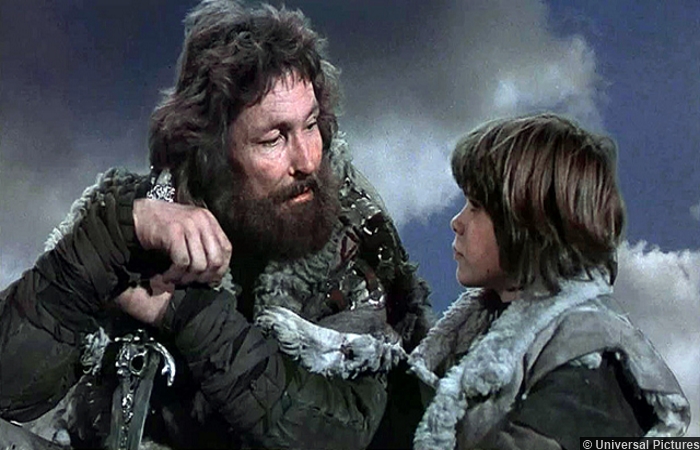 What follows is almost ten minutes of wordless action, set over a beautiful score (hat tip to Basil Poledouris), climaxing in a village raid led by, of all people, James Earl Jones in a Cher wig.

Our narrator returns, sounding like an English actor pretending to be a Japanese actor trying to do an American accent.

You know, as cheesy as this is, at least it’s filmed on location in various European locales. It’s very pretty to look at, unlike modern fantasy epics like Gods of Egypt, which are just cheap-looking greenscreen abominations.

Hey there’s Arnold, coming in at about the 20 minute mark. Conan apparently spent twenty years of his life pushing a wheel as a slave (his parents were killed by James Earl Cher by the way).

Conan fights in a gladiator pit, half naked and rolling around the floor, bleeding on other half-naked men. And if you think I find that weird, ha ha to you, I grew up watching the WWF Attitude Era.

We’re about a fifth of the way through the movie and 90% of it has been in the form of a montage. I kind of hope the whole movie is like this; just montages showed over the narration of fake Japanese/American guy.

Boobs appear and then are covered.

So far, other than Arnold’s patented “growl scream“ Conan has not uttered a word.  I’m okay with this.

Oh wait nevermind, no sooner than I type that do we get the now-infamous “What is best in life?” scene:

That was also Donald Trump’s campaign philosophy, I believe.

Another wordless montage, this time showing Conan suddenly being chased by dogs at night (no transition to show when or why, let’s just roll with it).  He climbs a rock and then falls down a hole. We’re led to believe he is trapped down there (he builds a fire, looks around nervously and so forth) but then he comes upon a skeleton and a sword. Next thing we know he’s climbing out of the rock like it’s no big deal, so I don’t know what’s going on.

Aaaaaand now Conan has come upon what I can only describe as “The Best Little Whore House in Middle Earth.” Except I’m pretty sure the lady in question is more of a witch than a whore. She’s speaking some kind of weird language and then the lights go blue and she transforms into a snake woman that Conan tosses into the fire.

Conan meets our narrator guy, and sets off to find James Earl Cher, which leads to another montage as Conan and his little lackey/buddy search a city looking for……

And now they’ve met a blonde lady who gives them rope and helps them climb a wall. On the other side is a well. Down the well is some kind of weird snake people ceremony that Conan and his lackey interrupt, only to come face to face with a giant snake monster.

A mix of stop-motion and props bring the monster to life and even though it’s cheap and silly it feels more real than the basilisk fight at the end of Harry Potter and the Chamber of Secrets. I wish more studios would use physical props and rely less on computer effects.

I’m almost halfway through this and there’s been maybe two pages of dialogue in the whole film. I’m wondering what Oliver Stone charged to do this movie because whatever it was it was a steal. I think I understand what made this movie a hit. I mean, it was a hit, grossing well over 100 million (in 1982 terms that’s a hit), but the story is nonsense, the direction and editing is amateur, and the screenplay is really just an outline. But the mindless action, violence and uber masculinity helped it win over boys (and men who act like boys) everywhere.

Oh snap, Max Von Sydow is in this thing? Add another star to the rating.

Another montage (at this point it would be more practical to list off the scenes in the movie that weren’t montages) takes Conan (now sporting a full suit of armor) to a desert land where he meets an aborigine. And…oh…this guy is the narrator, not the other guy. The other guy is gone now. His role is the movie was entirely pointless I guess. 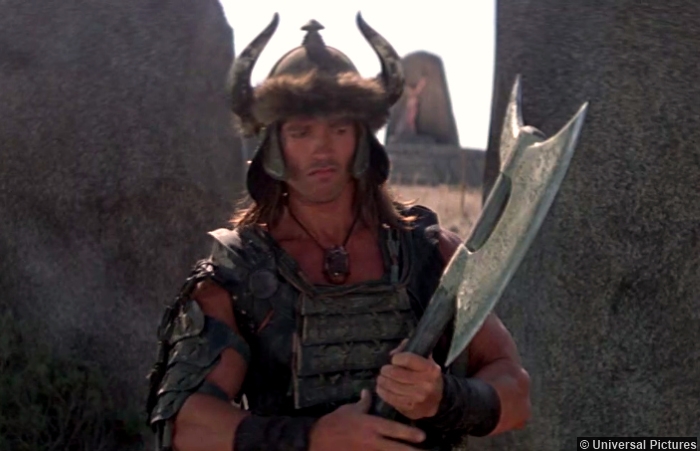 Our titular hero has infiltrated a hippie pagan commune, flirted with and then beat up a priest and stole his clothes (despite the priest being a Medium, at best, and Conan being an XXL). The disguise seemed to work perfectly as he made his way into a crowd of thousands, watching James Earl Cher give a speech. Suddenly he is discovered and captured, with no discernible reason for how he was found out. He just suddenly is.

Villain monologue time, as James Earl Cher lays out his worldview for Conan, whom he keeps referring to as “boy” before tying him up on “the tree of woe” like a muscular, Austrian Jesus.

Conan is rescued from death thanks to The Blond, The Lackey and The Narrator putting some voodoo spell on him. It’s a trippy scene that blends live action and animation.

James Earl Cher has turned into a literal snake but this film is still ten times better than the live-action Super Mario Bros. movie. 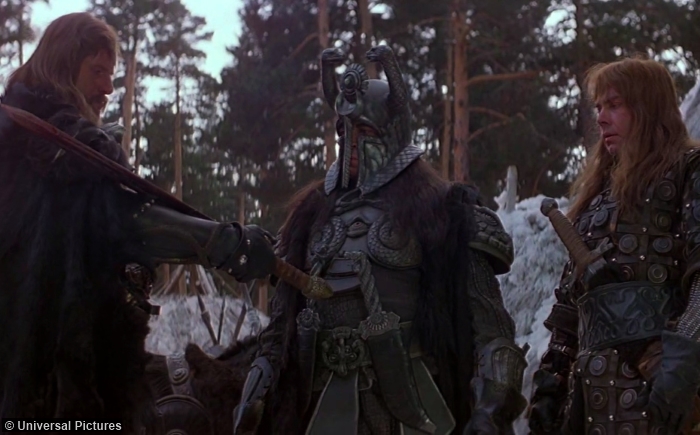 Conan tracks down James Earl Cher who tries to brainwash the hero into thinking he’s Conan’s father. The old Darth Vader trick…doesn’t work as Conan cuts off Cher’s head and holds it up like a trophy.

Narrator guy tells us that Conan had many more adventures and eventually became a king, promising that those stories would also (later) be told…Presumably in 1984’s much less fun and much more terrible Conan The Destroyer.

There was a remake which we shall not speak of, and Arnold has been working for years on a sequel that would see him don the fur underwear again. Whether or not that movie ever comes, we will always have The Barbarian, a movie which embraced its own sense of stupid fun, low-IQ masculinity, nonsensical plot and love of muscles.

It may not be a “good” movie, but it is an awesome movie.

See you next month, as we look back on TRON!