Forty years ago Steven Spielberg’s third motion picture (and the first wholly-original work the director had done thus far) was released. The Sugarland Express was partially based on true events, and Jaws was a recent best-selling novel, but Close Encounters of the Third Kind was all Spielberg. In years to come Spielberg would play around in almost every genre imaginable, and would direct original films and films based on previously-existing works. But throughout his career—which is considered by many the greatest in the history of film direction—there’s only been one movie that he’s both written and directed. He co-wrote the screenplay for Sugarland Express, and he finished the screenplay that Ian Watson had begun for Stanley Kubrick’s aborted A.I.: Artificial Intelligence movie. And even though he ghost-directed Poltergeist, he shared in the screenwriting duties with two other people. Close Encounters is his baby, even more that E.T. (written by Melissa Mathison), which he has called his “most personal” film.

Spielberg’s career is the ultimate. War movies, thrillers, drama, comedy, ensemble movies and small/intimate films; whether it’s blockbusters like Jurassic Park, or period pieces like Munich, the man has done it all, but if there’s one genre he’s going to be remembered for, it will be science-fiction. Before Spielberg, sci-fi was mostly limited to B-movie status. You’d have the occasional 2001: A Space Odyssey or Planet of the Apes in the 1960’s, but for the most part the 60’s treated the genre as a joke. In the 1970’s a wave of so-called “sci-fi” movies were released, all with dark, dystopian themes or futuristic settings. Movies like Rollerball, Soylent Green, Logan’s Run and Silent Running defined the 70’s era of science fiction. Even the cheerful escapism of Star Wars (which really is more of a fantasy than a sci-fi movie) had the same “futuristic” and “not of this world” background.

Star Wars was of course directed by Spielberg’s pal George Lucas, and while Lucas was toiling away on the movie that would define the rest of his life, Spielberg was working on his own little passion project. It too would be a science-fiction film, but unlike Star Wars, and unlike so many other sci-fi movies of the era, Spielberg would make his movie contemporary. The setting would not be some far away galaxy or far away time, it would be Muncie, Indiana, the most “middle America” sounding place imaginable. Instead of laser guns or gritty fights with killer robots, the focus is on ordinary people being affected by an extraordinary thing.

The wonderful teaser poster probably misled curious ticket-buyers back in 1977. The poster shows a darkened highway, stretching out toward a hill, with an ominous blue glow on the other side. Above it is the mysterious title “Close Encounters of the Third Kind” and above that is an explanation of the various “kinds” of encounters. A close encounter of the “first” kind describes seeing a UFO flying overhead. A close encounter of the “second” kind means coming into physical contact with evidence of alien activity. A close encounter of the “third” kind is summarized on the poster with only one word: “contact.” 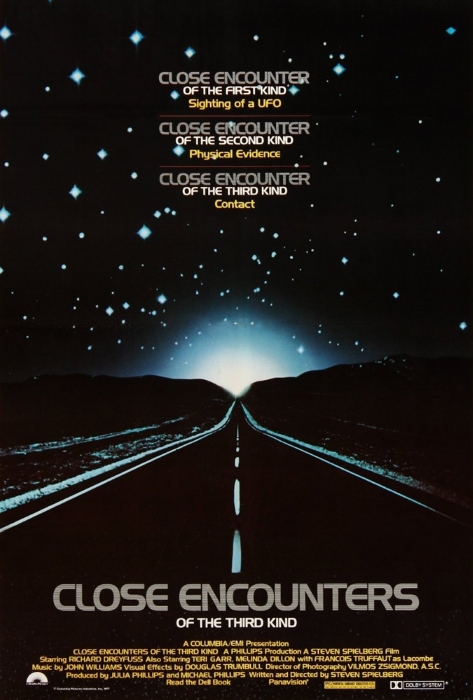 The fact that contact is not made (from the audience’s perspective) until the final moments of the film might have been a bummer to the audience if they were told that going in, but the way the movie is laid out, it makes perfect sense. The movie isn’t about the third kind of encounter, it’s about all three.

Spielberg starts the story with a close encounter of the second kind; a fleet of World War II fighters turn up in the middle of the Sonoran Desert around the Mexico/Arizona border, after being reported missing a generation earlier. A witness claims that “the sun came out and sang to him.” The mystery of this “second kind” of encounter drives the story and gives the two major characters we’re soon to meet a path to follow.

Next comes a “first kind” of encounter that’s presented to the audience without any visuals; air-traffic controllers talk over each other while trying to make sense of something a couple aircrafts have encountered mid-flight. It’s clear from the dialogue that something is up there with the planes that’s not supposed to be there, but when pressed if they want to officially report a UFO sighting, both pilots back off from going out on that particular limb. It’s a great way to tease the eventual reveal of the UFO’s; Spielberg plays games with his audience the same way he kept the shark obscured in Jaws for far longer than anyone would have guessed.

Those two opening scenes establish the tone of the story. This isn’t action driven; it’s more patient and meditative. It’s not about the aliens, it’s about the people who “encounter” them in various ways. With that established, we jump to our regular folk characters who will carry the rest of the picture, but even then Spielberg teases: A child is awakened from sleep to commotion happening in the kitchen. We follow his entry into the room, with the camera focused on his face; we never see what he sees…but he sees something. Whatever he sees isn’t threatening based on the curious smile the child gives it, followed by a playful game of chase the boy plays, causing his mother Jillian—Melinda Dillon—to run after him. Meanwhile, Richard Dreyfuss’ Roy is a run of the mill husband and father working as an electrical lineman who is called to work late in the evening when a passing-by UFO knocks out power in a miles-wide block. It’s here, finally, after twenty minutes of teasing that we—the audience—get to experience our first close encounter. 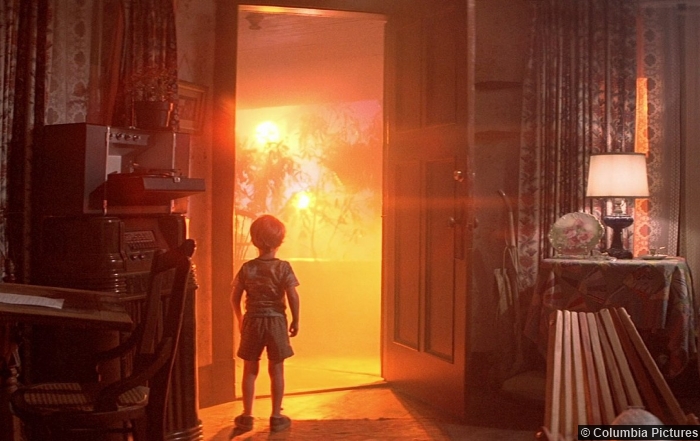 And of course it’s classic Spielberg.

The director is sometimes criticized for getting too cute at times in his movies. It’s ridiculous how many were up in arms over the little splash of color used in Schindler’s List. He was even criticized for the shooting star in that one scene in Jaws, despite swearing that he just happened to record it while shooting the movie. This movie has a patented “cute Spielberg” scene (in fact it has two, if you count the ode to the Jaws theme in the climax), where Roy’s truck is parked in the middle of the road, only to have a pair of bright headlights approach. Having already heard the UFO’s described as containing bright lights, we naturally think “here we go!” only, nope: It’s just a motorist slowing down to curse him for being stalled in the middle of the highway. A moment later another set of lights pulls up behind him, and when Roy waves him to go around, the lights ascend above his car. It’s meant to put a sly smile on your face, and it does. You can call it cute, but really it’s just joyful filmmaking. 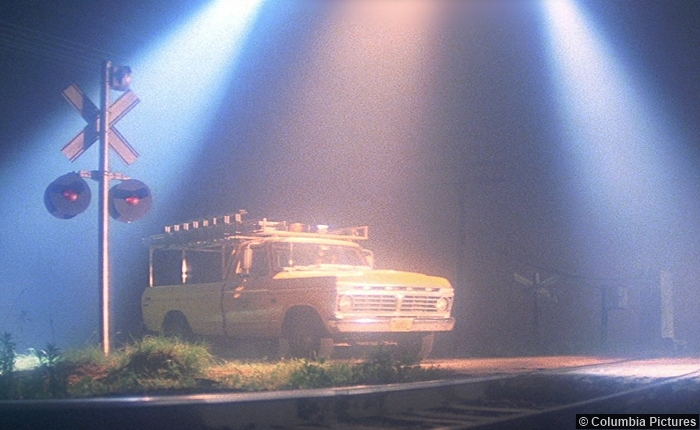 Both Roy and Jillian experience something when they encounter the UFO. Roy in particular becomes obsessed with a mountainous shape he can’t get out of his mind. He sees it in his shaving cream, he tries to make it with his mashed potatoes. If there’s a flaw in the movie it’s during this stretch of film, where the investigators who first discovered the missing planes continue researching ways to communicate with the aliens, and where Roy grows increasingly obsessed/crazy after his close encounter. The film’s forward momentum stalls and modern audiences might not have been able to sit through it the way viewers did in 1977. It’s possible Spielberg realized the same weakness because he films an alien abduction scene halfway through the film that is one of the most frightening ever depicted on screen. It’s also totally out of place in this kind of movie and in the character of the aliens that we’ll meet at the end of the film. You’d swear that Spielberg just decided to throw something big, loud and jolting onto the screen to keep from losing the audience in the back-half.

Finally at his breaking point, Roy forms a model of the mountain in his mind out of dirt and chickenwire in his living room. It’s then that he discovers the image he’s been seeing is the famous Devil’s Tower mountain in Wyoming. Roy and Jillian race to the site, along with the US government, who received from a UFO latitude/longitude coordinates to the same mountain. Everyone comes together in the final scene to experience a close enounter of the “third” kind. The UFOs descend, there’s a trippy lite-brite piano/tuba jam session and then the doors open. We get fleeting images of the aliens but the camera never dwells on them because this isn’t their story. It’s not a movie about aliens, it’s a movie about the encounter. 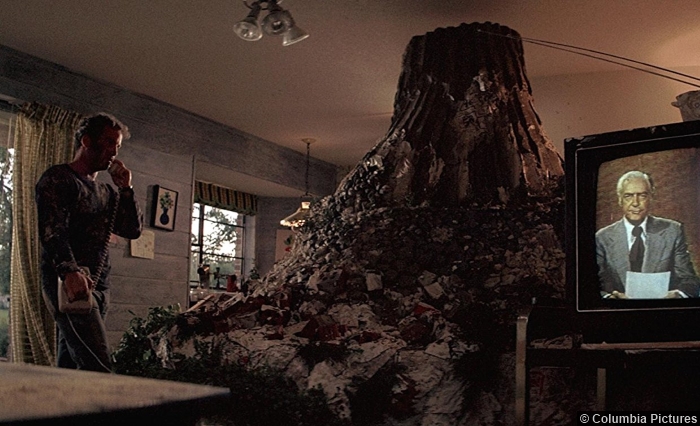 During the climax, a host of people disembark the spacecraft; people that have been abducted over the years return to the world they left behind. There’s someone there to meet everyone; the abducted child from the midpoint of the movie is reunited with his mother, the soldiers who disappeared with their ships are welcomed back by their government, even the background characters who get no screentime or lines are all ushered over to one clipboard-holding person or another, ready to debrief them and send them back to their homes.

The only person there that isn’t receiving someone is Roy. His wife and family left him, he has no one else. As he says near the end, he just “wanted to know that it was real.” It makes sense that the only person not welcoming someone home would be the one to leave with the aliens voluntarily. A close encounter of the “third” kind is not just seeing a UFO or possessing physical evidence that they’re out there, it’s about making contact. Just saying hello is not enough; going with them is the ultimate contact. 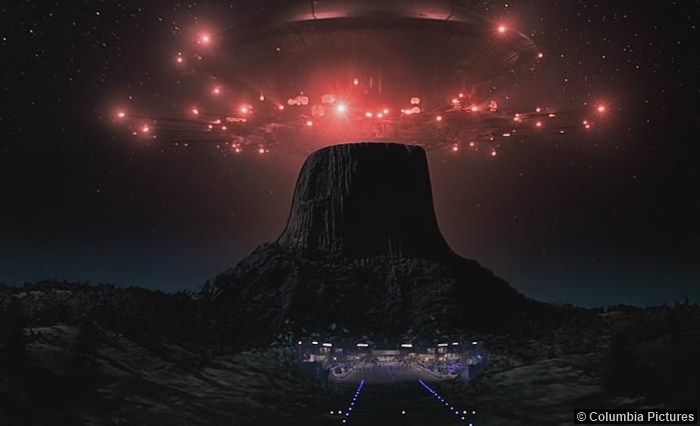 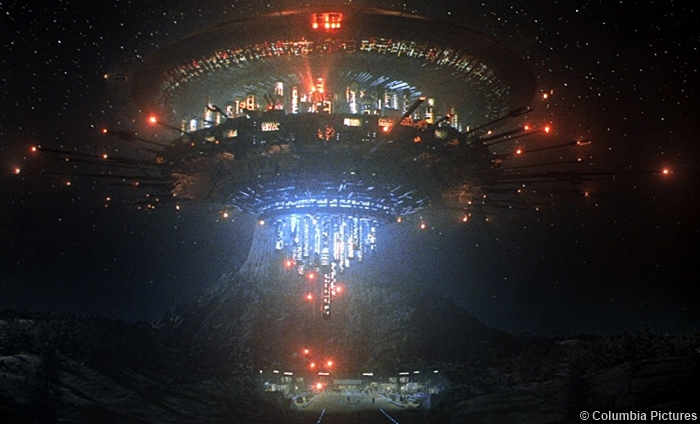 Sadly, this is not a movie that could be made today. No studio would greenlight an alien movie as slow, deliberate and contemplative as this. The final sequence of the movie (basically a quarter of its runtime) is an encounter between aliens and men, and there’s not one explosion, not one shootout, not even one cliched military general who insists on “being ready to strike in case they’re hostile.” The climax of the movie is about people learning how to say hello to other people. It could only have been made in the hands-off “auteur” era of Hollywood, by a director hungry to prove his recent mega-hit was no fluke by doing something totally different yet just as magical.

And that’s what this movie is: Magical.

9/10 – Almost perfect. It drags a hair in the middle, just before the abduction scene, but other than that, this is one of the finest examples ever put to film for what makes high-brow science-fiction so great.

Close Encounters of the Third Kind has returned to theaters for a limited release in honor of its fortieth anniversary. Sci-fi fans, Spielberg fans or just fans of classic movies “the way they used to be” owe it to themselves to see it (and especially to hear it, as the climactic scene on Devil’s Tower is a feast for the ears) in a big venue like it was intended.