We started in January with Conan the Barbarian (see our stream of consciousness rewatch here) and then followed it up in February with TRON (look back on its legacy here). In March we reminisced about The Secret of NIMH, a classic fantasy from the legendary animator Don Bluth (click here to read all about it). In April we talked about the forgotten gem The Sword and the Sorcerer (we reflect on its overlooked history here), and last month we celebrated the great Jim Henson passion project, Dark Crystal (read all about it right here). This month we leave the world of fantasy behind and reflect on the beginning of a quintessential eighties franchise: Rambo. 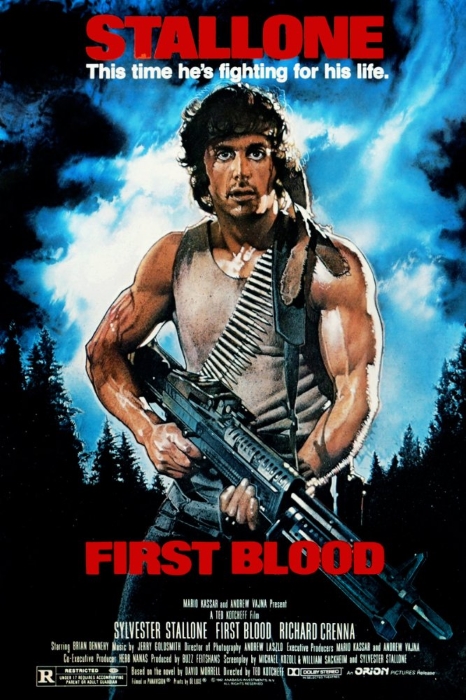 Have you ever actually watched the original Rambo movie, First Blood?

It’s a movie probably everyone has heard of and the title character himself is an iconic one, with his tank top, shoulder-length hair, headbands and giant knife. It’s become a parody of the cliched 1980’s action movie star, and those who have never seen the original probably assume they’re going to get a mindless explosion-fest, with corny dialogue and gratuitous violence.

To start with there’s only one on-screen death. Considering the iconic poster, with Rambo carrying an M60 Machine Gun and draped in ammo, that’s an interesting factoid. Only one character dies in the movie, and that death is accidental. There is a lot of violence, certainly, but unlike so many other mindless action movies of the era (and today), everything that happens in this movie has a specific purpose.

One scene in particular features Rambo holed up inside a cave with the National Guard bearing down on him. The Guard is portrayed as a group of incompetents excited to “play solider” and fire every round they have at their disposal (including a rocket launcher) at Rambo. A two-minute scene of ear-splitting ammo-fire then follows, culminating in a massive rocket explosion. What separates this movie from its copy cats is the fact that the violence here is mocked by the film (as opposed to the pretenders, whose wall-to-wall violence is mocked by audiences). After depleting their ammo and being shouted at by the local sheriff, the National Guardsman in charge asks if he can leave because he has to “open the pharmacy” in the morning. These are the boobs brought in to take down John Rambo.

And who is John Rambo?

He’s a Vietnam Vet, a Medal of Honor winner, retired Green Beret. He’s come to a quiet little Washington town to look for the only other surviving member of his unit, only to be told he died recently of cancer. Despite his tough guy look and, obviously, the “killing machine” skills he later shows off, Sylvester Stallone portrays Rambo as though he’s the lead in a dramatic film not an action movie. This Rambo is quiet, respectful (at first) and not looking to make trouble for anyone. There are flashes we’re given throughout the movie which show the horrors he experienced as a prisoner of war in Nam, and those flashes are handled with grace and tact, not satirizing the horrors of war but using it to establish the character without pace-halting exposition.

That’s actually one of the reasons why this movie is such a classic; it’s one of the best-edited so-called action films ever. Everything we need to know about the title character is revealed in the opening ten minutes, as Rambo searches for his now-dead fellow solider. Additional information is given in short bursts (such as flashbacks to his Viet Nam days that last only seconds) or through dialogue that comes at just the right time for the audience to catch its breath. The rest of the tight, ninety minute movie races at a frantic pace as Rambo first runs from, and then hunts down the local police force trying to arrest him.

Stallone has said that this movie was a make it or break it role for him. To this point, in 1982, he had only had one successful role on screen: Rocky. All other movies that he either wrote or starred-in were bombs. If this movie failed, he knew his career would fail with it. When he watched the first cut of the movie, however, he was mortified. The original cut ran for three hours, and went into great detail showing his time in Viet Nam as well as more character-building in the Washington town he visits before he’s picked up by the police. The pace was slow and the major action scenes were so spread out, with long dialogue scenes in between, that there was no way for audiences to stay engaged in the story.

Stallone hated the first cut so much he offered to buy the rights to the film just so he could destroy it. When his offer was rejected, he worked to cut the movie’s runtime in half, almost completely excising the footage of Rambo in Viet Nam and stripping away the dialogue scenes in Washington down to just a few key moments needed to progress the story. The effect worked wonders. By cutting the POW portion of the story down to a handful of seconds-long flashbacks, audiences were able to sympathize with the main character.

The phrase “post traumatic stress disorder” (a term that was coined just a few years earlier) is never uttered in the movie, but by showing his past in quick, horrific flashbacks, we were able to see it without being told it. That’s good movie-making. Likewise by cutting most of the dialogue scenes around town, the film is able to move quickly to and through the action, putting the audience on the edge of their seat from the fifteen minute mark until halfway through the movie, when there’s a brief interlude that introduces Rambo’s old boss, Col. Sam Trautman. 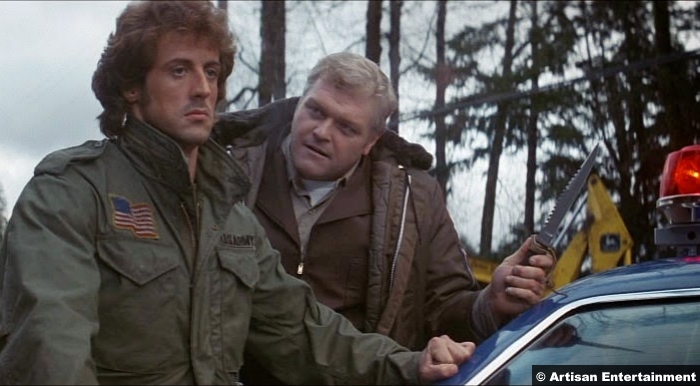 Trautman explains to Sheriff Teasle that he picked the wrong man to mess with and that he and his officers were lucky to have survived their first encounter with Rambo. If there was any editing flaws to point out it’s centered on this portion of the movie. Too much was cut out and one critical bit of motivation was removed which prevented Teasle from being appreciated as a three-dimensional character. He meets Rambo early in the movie and immediately shows contempt for him. We assume it’s due to his being a “drifter” and the small town sheriff wants to keep his community free of such “vagrants.”  There is one line in their first conversation that hints at something deeper, however: Teasle remarks that people in his town wouldn’t take kindly to seeing a man with a flag stitched onto his jacket. That’s an odd line today, in the post-9|11 America, but in 1982 there was a lot of leftover negative sentiment toward Viet Nam soldiers. They were accused of doing some terrible things while overseas and Teasle is certainly alluding to that in his first talk with Rambo. Later, however, we see Teasle’s office and notice that he has a plaque on his desk bearing a purple heart and silver star; medals won in his won service with the military.

Unfortunately the entire subplot explaining Teasle’s motivation for hating Rambo was cut, so fans were left to wonder. Actually the reason Teasle has such an immediate dislike of the Viet Nam veteran is because he served in Korea, a war which was largely forgotten by the 1980’s; everyone loved to talk about Viet Nam and Teasle felt the scandalous actions of those soldiers made soldiers like him look bad. A big part of the movie (as with the book on which it’s based) was to focus on Teasle hunting Rambo in the Washington state woods, using his Korean War training against Rambo’s Viet Nam training. Cutting that out may have made for a leaner picture, but it would have done Teasle’s character better to have at least one line (spoken to Col. Trautman) explaining his motivation. As it is we’re left to assume he’s just another bad cop who likes to throw his authority around.

That one small criticism doesn’t change the fact that First Blood is a movie that not only set the standard for action movies to come, it retroactively broke the type of those movies as well. Future movies in the genre (even its own sequels First Blood Part II and Rambo III) failed to give much depth to its heroes or villains, and assumed that a good “action flick” just meant mindless violence and loud noises.

First Blood refused to be mindless. It offered a dramatic story, wrapped up in thrilling action, that not only entertained the masses with its gun-fights but also offered a thoughtful commentary on the effects the Viet Nam war had, not only on those who fought it, but on those it was fought for. Everyone has heard of Rambo, but if you haven’t actually watched it, or if you haven’t in a while, look it up and enjoy it. 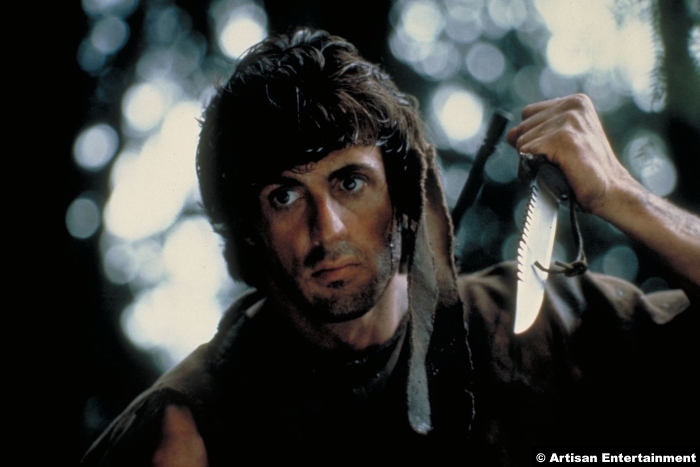