We started in January with Conan the Barbarian (see our stream of consciousness rewatch here) and then followed it up in February with TRON (look back on its legacy here). In March we reminisced about The Secret of NIMH, a classic fantasy from the legendary animator Don Bluth (click here to read all about it). In April we talked about the forgotten gem The Sword and the Sorcerer (we reflect on its overlooked history here), and in May we celebrated the great Jim Henson passion project, Dark Crystal (read all about it right here). The past two months have featured Sylvester Stallone hits, the First Rambo movie, First Blood, and the third Rocky movie.

Shifting gears from boxing to space, the Star Trek franchise was on life support after only one motion picture. What was hoped by Paramount to be their answer to Star Wars and a 1980’s cash-cow started out as a cerebral, introspective, meditative film, the critics of which labelled as “boring.” While the movie’s reputation has improved somewhat over the past forty-years, it’s still largely considered a poor first-outing.

And while Paramount wanted a sequel, they insisted on a cheaper, more action-driven sequel. To that end, they turned to Nicholas Meyer, a rising writer/director who had an Academy Award screenwriting nomination in one hand and a boatload of science fiction awards in the other. He recently had won acclaim for his directorial debut, Time after Time (a sci-fi about HG Wells taking a time machine to the 20th century to stop Jack the Ripper). Paramount pitched him creative control on the second Star Trek movie (much to the ire of franchise mastermind Gene Roddenberry) and Meyer accepted. 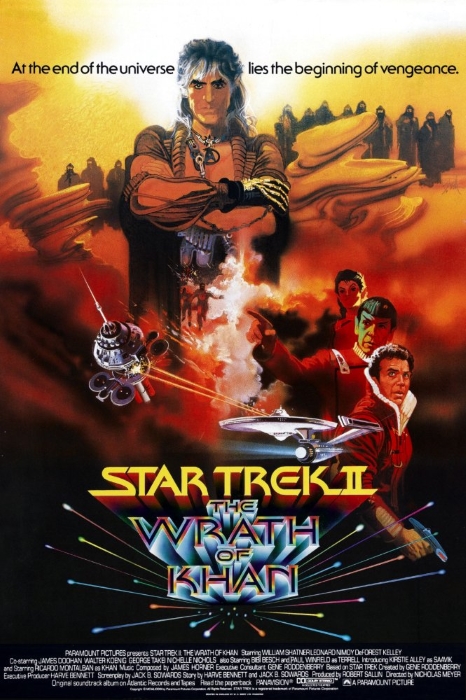 Meyer handled the screenwriting duties himself, juggled the ego of William Shatner with the intentions of Leonard Nimoy to leave the franchise with a death-scene, as well as managed Gene Roddenberry’s complaints-from-afar over the various changes the outsider director was bringing to the franchise.

In the end the movie succeeded beyond everyone’s wildest dreams: It grossed nearly ten times its budget, it reinvigorated the brand, and it did what Paramount wanted most of all: It turned Star Trek into a genuine movie franchise. Meyer deserves the lion’s share of the credit too because it was his approach to the Star Trek universe that ultimately saved it. Paramount wanted to turn it into Star Wars, but Meyer saved Star Trek by making the most “Star Trek” like-movie ever released.

Here’s what the man himself says…

The chief contribution I brought to Star Trek II was a healthy disrespect.

Star Trek was human allegory in a space format. That was both its strength and, ultimately, its weakness. I tried through irreverence to make [the characters] more human and a little less wooden. I didn’t insist that Captain Kirk go to the bathroom, but [it didn’t] have to be so sanctified

Meyer focused on the humanity of the characters, putting them in situations where they would be forced to deal with their own insecurities, failures, and past mistakes. It’s a story that, on the surface, is drenched in Trek lore: The primary villain is a holdover from The Original Series, the big climactic battle is a fight between two space ships inside a bright blue nebula, there’s discussions about the chain of command, shouts about what percentage shields down to, and urgings for Scotty to go to Warp Drive. It has all the trappings of Trek, as does every other movie in the series. What makes this one so special is that it doesn’t rest on the window dressing; it has a tremendous “human” plot happening under the sci-fi surface. At its core is a story that could be told in any environment.

What is sci-fi anyway? 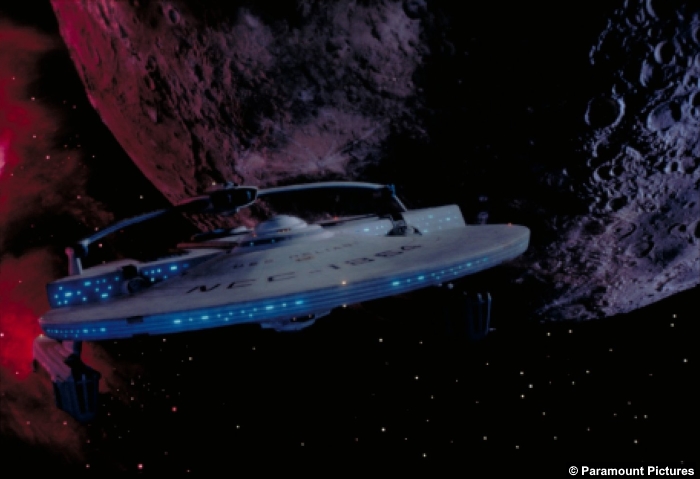 In the above quote, Meyer describes Star Trek as “human allegory in a space format.” That’s not Star Trek he was describing, that’s basically all of science fiction. The genre butters its bread on taking ridiculous, fantastical scenarios and using them to teach humanity lessons about itself. The best sci-fi stories are parables about the human condition. Star Trek, when it does it right, is the the best at that.

The first movie had the parable, but it didn’t have the excitement. It didn’t have the sizzle to keep the non-nerds entertained. The best sci-fi knows it’s not enough to wax philosophical, you also have to keep the forward moment going. Star Trek II perfectly balances the sizzle with the steak. It perfectly mixes the rush that comes from a big showdown between opposing forces, and the ethical (and emotional) implications that rise from the philosophy of “the needs of the many outweigh the needs of the few.”

Because the movie was committed to being “about something” it succeeded where the recent Star Trek reboot films have failed. Paramount continues to look at Star Trek as “their version of Star Wars” and they push for movies to reflect their misunderstanding of their property, just as they did with Meyer. But Star Trek II understood that Star Wars is “space fantasy” while Trek is pure “science fiction.” Can it be adventurous? Yes. Can it be romantic? Sure. Can it be thrilling? Absolutely. But in the end, it is science fiction, and thus it must be “about something.”

Star Trek II is a movie about life and death.

It is not, despite the word “Wrath” plastered right there in its subtitle, about revenge. Revenge is the chief motivator of the villain, but despite how wonderful Ricardo Montalban is in the movie, and how fully-realized his arc is, the story here is not Khan’s, it is Kirk’s. The movie begins with Kirk as an admiral (just as he was in the beginning of the first movie, the details of which are entirely ignored in this film). As a member of Starfleet “brass” he’s no longer in command of a starship. Instead the ship is being led by “Captain” Spock, who commands it under the authority of Starfleet Academy. The old crew of the Enterprise (except for Chekov and the aforementioned Kirk) are now teachers on a “boat full of children” as Kirk calls them. Kirk is older, but not content. He is anxious, restless and frustrated with a deskjob when he would much rather be off hopping galaxies. It’s also his birthday, which doesn’t better his mood, and neither do the reading glasses that McCoy gifts to him…OR the book that Spock gives him (“A Tale of Two Cities” with its somber refrain “It was the best of times, it was the worst of times…”). Things are not great for Jim Kirk as he contemplates his place in the current world and struggles with thinking of his past as “passed.”

And then fate steps in and an old nemesis returns.

By pure coincidence, Khan commandeers a starship (XO’d by Chekov) and flies to a space-station overseen by Kirk’s former lover Carol Marcus. Kirk comes face to face with a reminder of the rebellious days of his past, both in the form of Carol and of the child they had together: His son David. There’s action, thrills, betrayal, even a dash of horror (that scene with the abandoned station and the dead bodies was terrifying to ten year old me), but the real heart of the story is Kirk being forced to confront the sins of his past (a past he, at first, was yearning to restore) while also wrestling with a midlife crisis and the fact that he’s not getting any younger. 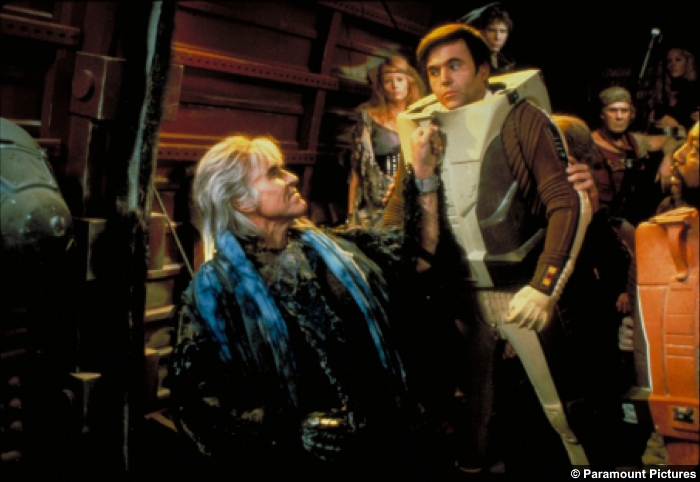 Speaking of death: Khan wants revenge for the death of his wife (who died on the planet Kirk left them on in the Original Series). He finds his way to carry out revenge by weaponizing the “Genesis” project (turning a life-bringing experiment into a planet-sized atom bomb). Kirk starts the movie dragged down by his own mortality. He then rediscovers his son and the life he could have had and it reinvigorates him.

Life and death, death and life.

There’s a telling conversation mid-way through the movie, where Kirk explains to cadet Saavik how he beat the supposedly no-win scenario at the Academy (a scenario Saavik is shown losing in the opening scene of the film): In short, Kirk cheated. He says this without any sense of shame; on the contrary, he beams as he tells it, feeling a great swell of pride at his actions (and of the commendation his original thinking earned him). As he says: “I don’t like to lose.” If you must cheat to avoid defeat, you cheat. As long as you live to fight another day, you win.

At the end of the movie, the crew faces a real-life no-win scenario. Khan, defeated, activates the Genesis device, intending to destroy himself along with the incapacitated Enterprise. This time, however, Kirk has no more cards to play. There’s no way to cheat his way out of what’s coming. Death seems to be the only possible outcome until Spock takes it upon himself to restore the ship to capacity, allowing it to escape. The rescue came with only one casualty: Spock himself. The first-officer remarks that he never took the no-win scenario at the Academy, but that his solution was at least as inventive as Kirk’s. His death gives life to the crew. Khan’s death coincides with the Genesis device overloading, the shockwave of which brings life to a dead planet (later dubbed “The Genesis planet”).

Life and death. Death and life.

The movie ends with Kirk at peace after starting the film in such disarray. He looks out toward the new planet that has been birthed and quotes from the book Spock gave him on his birthday. McCoy asks how he feels, and Kirk replies “Young.” 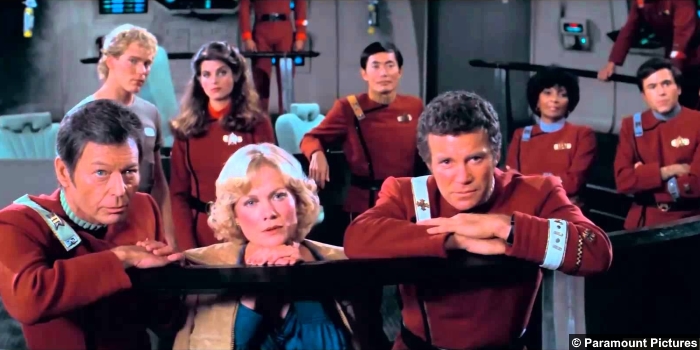 It’s the conclusion of a character arc that any film-watcher can appreciate, Star Trek fan or not, sci-fi fan or not. It’s the conclusion to a movie that earned every heap of praise it continues to be given today. It remains the most-consistently beloved film among fans, even among those who love the purer, Roddenberry-esque, utopian view of The Next Generation, or the tension-free fun of The Voyage Home (“the one with the whales”). No matter what kind of fan you are, odds are good you love Star Trek II.

If there was only Trek film I could ever show a non-fan, it would be this one. It’s the finest film in the franchise, and not just that, it’s one of the finest flicks of the 1980’s.