Last month, Cult of Whatever began a series of articles examining some of the great movies of 1982. We began with Conan the Barbarian, the movie that essentially launched Arnold Schwarzenegger’s Hollywood career. It was a movie that divided critics but which fans—particularly men—enjoyed for its escapism and over the top fantasy action. As time went on the movie developed into a cult classic, worthy of remembrance thirty-five years later.

A similar story can be told of TRON. Though it didn’t launch any superstar careers (Jeff Bridges was already well-established) it was a divisive movie, big in its own way, and one which a small but enthusiastic following refused to forget about. 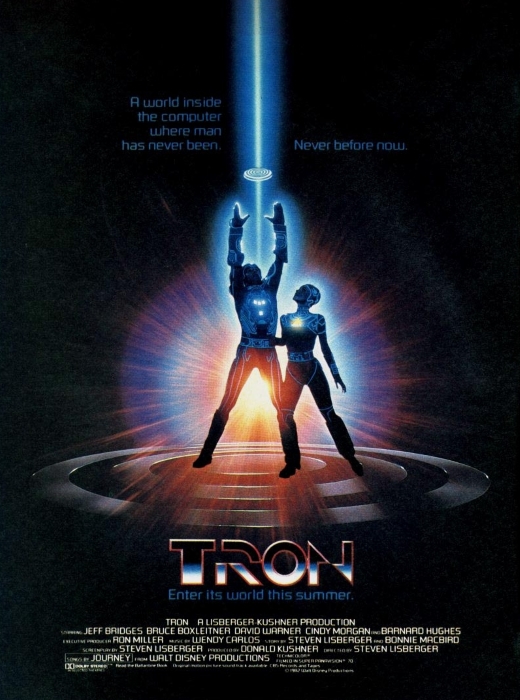 I first watched TRON when I was a child in the early 90’s. I suppose we rented it at the local video store because we didn’t have cable and I’m certain Michael Eisner never introduced it on The Wonderful World of Disney. All I remember about it was that it was—from my childlike perspective—boring at first before turning into something reminiscent of Star Wars. I never revisited it, nor paid it much mind, but over the years it became apparent that the film had a much greater impact on others than it did on me.

I recently sat down to watch it properly and came away with a slightly different (but not too much) take on the movie than I had as a child.

TRON either does a very bad job building its world or a very good job keeping secrets from the audience, it’s hard to know which one Steven Lisberger (writer/director) was going for. It’s a very out-there movie, especially for its final hour, but it presents its story almost in short hand, as though it expects the audience members to already be familiar with the rules of the universe.

It’s also interesting how the movie meshes two very different styles together. The beginning of TRON is the first act of a sci-fi heist film. There’s a little teaser of the Cyberspace realm early on, but there’s no context for it, so you’re forced to just kind of go with the flow. There are guys with armor and helmets getting pushed around by bad guys wearing outfits that look like they have pillows sewed into them. Everything is dark except for the neon colors that radiate from the clothes. It’s weird. It’s not bad, but it’s very different.

There’s a little exposition in this sequence designed to drop hints at what’s going on in this computer environment: Master Control is the big bad guy who oppresses the little people that believe in “The user.” It seems like pertinent information, but without any context it has to just be stored away to be remembered later.

And then, after the exposition is done, we cut back to the “real world” and are introduced to Kevin Flynn, the star of the picture. He’s a computer programmer/hacker, trying to break into the mainframe of the ENCOM computer company in order to obtain evidence that they (specifically ENCOM vice-president Ed Dillinger) stole several development ideas from him and passed them off as their own. Flynn’s attempts to hack ENCOM repeatedly fail because Dillinger created an anti-piracy program called Master Control Program (MCP) to block him. Flynn then teams up with his ex-girlfriend and a current ENCOM computer engineer in order to take down MCP and obtain the evidence needed to expose ENCOM of fraud.

That’s basically the plot the movie promises for itself as the viewer progresses through the first act. There’s a little hint that there’s more to the movie than a simple “heist/hacking” story, when Dillinger discovers that the MCP system he designed has gone Skynet and intends to take over the world and run it more efficiently than human minds could. But even that doesn’t really give away how much the movie is going to change in its final hour. 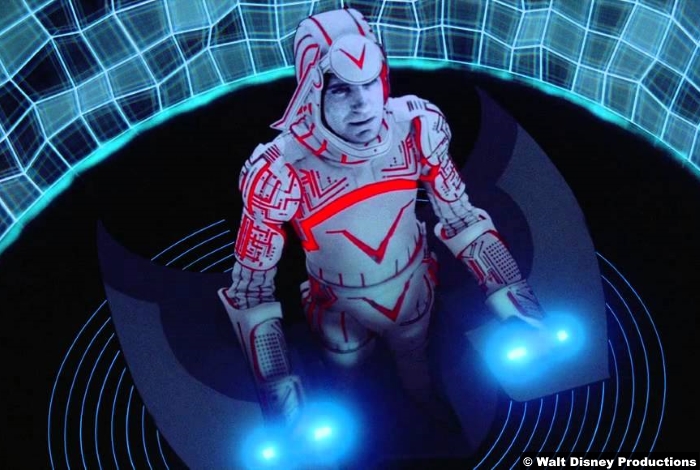 But watching it as an adult, I couldn’t help but make another movie comparison, one which is not so obvious: Fantasia.

For some reason, I kept thinking of Walt Disney’s experimental animated movie from 1940. Like TRON, Fantasia was more of an experiment masquerading as a movie. Fantasia attempted to blend classic musical pieces with Disney’s patented animation style, in a film with no over-arching plot or narrative. There is a surreal quality to the movie that makes it almost hypnotic, and though it’s not as fondly remembered as Snow White or Dumbo, it’s a masterpiece of ambition and creative risk-taking.

TRON too blends together different elements into a final form that is very artistic. In this case, there is a plot, but it’s flimsy at best and mostly there just to provide forward momentum; it’s the visuals that are on display here (just as the audio was the main attraction with Fantasia). Everything in the computer world is touched by rotoscoping. Live action characters and certain set elements are painted over by animators to give the image a vivid and futuristic look.  The plot may be a little unfocused, but the movie was never boring to look at.

If TRON is a spiritual successor to the ambition of Fantasia, then the Lightcycle sequence is its Sorcerer’s Apprentice. The sequence, which comes roughly halfway through the film, is the absolute peak of the production. Computer graphics were used to bring the bikes, and the grid on which they rode, to life. TRON wasn’t the first time a CGI effect-sequence had been seen before, but this was the dawning of that age, and this movie was the first to devote a lot of screentime to it. The entire scene only lasts a couple minutes, but it is fast, intense and a worthy showcase of the emergent technology. There’s a similar sequence later in the movie as the heroes ride what looks like a giant butterfly across an energy grid. A few years prior this would have either been impossible or would have to have been done solely with animation. Here, it’s done with computers and it’s unlike anything ever seen before. 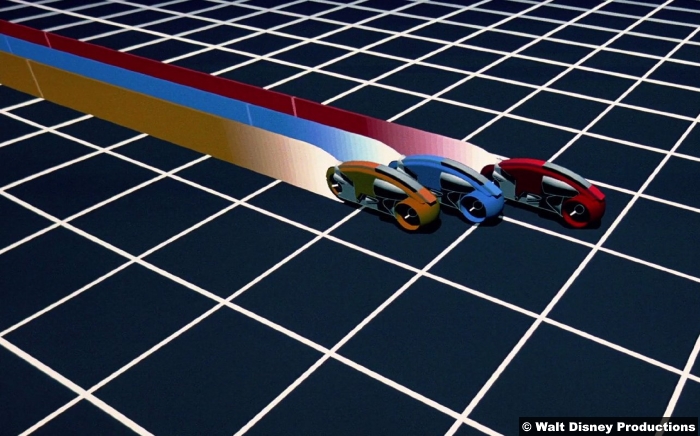 Disney was initially wary of committing much of a budget to such an experimental film with an unknown producer and writer/director attached. They only agreed to fully-invest in the movie after Lisberger wowed them with test footage of what the computer world would look like. Disney was impressed enough that they gave a then-generous seventeen million dollars to the production. As the July 9th release neared, the company was privately saying that they hoped to make 100 million in the US box office, and an additional 200 million from merchandising and other tie-ins.

Instead the movie debuted at #2, behind E.T., which released a month before and which held the #1 spot for sixteen of its first twenty six weeks in theaters. Tron’s second weekend saw it drop to fourth place, and by the third weekend it was off the radar. It ended its theatrical run grossing a little over 30 million; by the end of the year it was forgotten. Home video renting was in its infancy and it would be years before it would become the norm. When it did, it was mostly the big hits that generated the revenue, but over time smaller, forgotten gems started being rediscovered. That’s when TRON finally found its second life.

Those who never gave it a chance in theaters were badgered into giving it a go by loyal fans. Younger viewers who missed it in 1982 were attracted to the interesting visuals on the VHS rental box. The movie never reached it’s “second chance” zenith that, say, The Shawshank Redemption achieved, but it still managed to inspire. In 1995, Toy Story creator John Lasseter won a special achievement Oscar for Pixar’s breakout film and the now-head of Disney’s entire animation department specifically mentioned TRON as a chief inspiration for him as an animator. TRON proved that we had not seen all that animation could do while also showing what new techniques were just around the corner.

After almost thirty years, Disney tried to bring the franchise back to theaters with a sequel, TRON: Legacy, and though it too was a divisive film, it ended up making 400 million (worldwide), on account of is own groundbreaking visual effects and a healthy dose of nostalgia too. In the seven years since Legacy’s release, Disney has hinted at and toyed around with doing another one. As of yet, nothing is official.

In the meantime, fans young and old can revisit a movie that was almost a classic. Fans who used to stare at video game screens and wonder what was going on behind the glass found in TRON dazzling, weird and awesome possibilities.