We started in January with Conan the Barbarian (see our stream of consciousness look-back here) and then followed it up in February with TRON (look back on its legacy here). In March we reminisced about The Secret of NIMH, a classic fantasy from the legendary animator Don Bluth (click here to read all about it). Last month we talked about the forgotten gem The Sword and the Sorcerer (we reflect on its overlooked history here).

This month another fantasy film gets the spotlight. 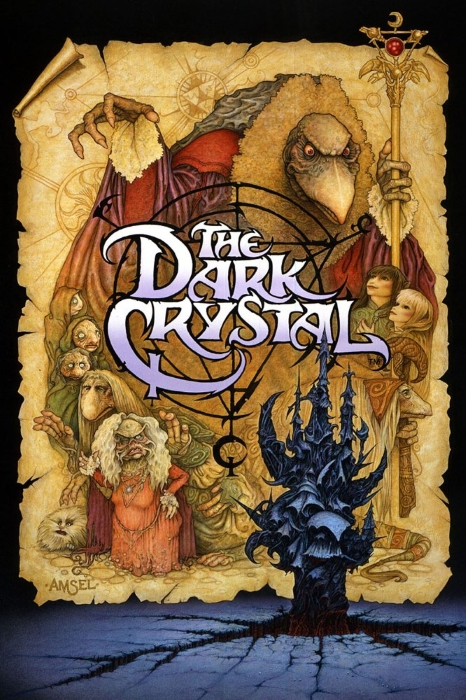 Jim Henson, the brains behind this operation and one of the authors of my (and countless others’) childhood, has a great quote about the need for children to experience powerful images at an early age:

I think it’s good when children see something scary in a movie or read it in a book. Children should never feel completely at ease when they’re experiencing a medium like that. Strong emotions leave an imprint that creates a connection that will last into adulthood.

That’s a motto I have always lived by, especially now as a father of three young boys. I didn’t realize my own personal philosophy was shared by Henson, but now that I see his quote I wonder if I didn’t subconsciously steal it from him after seeing an interview or something growing up.

Henson’s original fantasy film The Dark Crystal will probably not be considered “scary” by anyone’s metric, but it’s also not a “kid’s movie” the way “kid’s movies” are today. There’s no obnoxious comic relief character, spitting out inane fart jokes or groan-inducing one-liners. There’s no pandering or simplifying concepts like death, loss, suspicion and other “grown up” themes. This isn’t a “scary” movie, but it’s not going to intentionally soften anything just in case you might be too young to tolerate it. It’s a fantasy for anyone (or any age) who likes that genre. 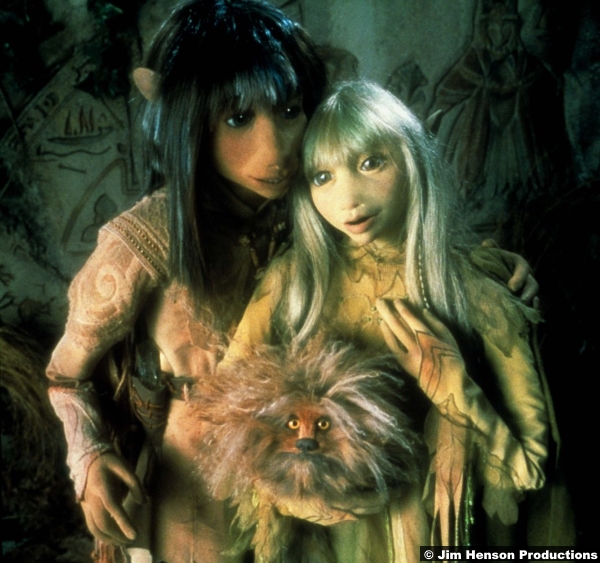 The masterminds of the Muppets co-wrote and co-directed this film to be a straight fantasy epic, not specifically targeted at kids or adults. The 1980’s were a great decade for fantasy adventure movies (many of which have been highlighted in this series). Star Wars played a big role in bringing the genre back, and even though Lucas’ stories were set against a sci-fi backdrop, the idea of fantastical stories with wizards, sword fights, hocus pocus and boyish fun can be told in a lot of ways. Movies like Conan and Sword and the Sorcerer went for the classic “medieval-style” look, but The Dark Crystal went its own way.

Henson started the project, not with a treatment or an idea, but with a world. He wanted to visualize the landscape, the races of the planet and the history of everything leading up to his story, knowing that history would never be shown or told on film. It was important to work backwards (most movies start with a story and then the designs follow the ideas), Henson said, because it helped the storyteller avoid slipping into the realm of the cliched.

The film is set on an alien world, but there’s no planet-hopping space ships or other sci-fi components. There’s a strong magical/fantasy element to the story (which focuses on the titular crystal similar to something you might find in an old Final Fantasy game), but there’s no semblance to “ancient earth” like you find in Conan and such like. To that end, the movie features exactly zero “human” characters. In fact, The Dark Crystal is the first live-action movie ever made to feature no actors at all.

Care was put into the environment as well to give it, subtly, a alien feel: Some shots feature animals that were designed to pass for plants at first glance, and plants that might suddenly crawl around like an animal. These strange additions to the environment were often tucked away in the background of shots with no focus or attention given to it. But it was important for it to be there, because it gives an almost subconscious feel that the world is not our own.

The major creatures on display can’t be easily described, because they don’t fall in line with the usual way in which fantasy creatures are usually designed: There’s no “lion with the body of a horse” or “cheetah that walks on two legs.” These are truly other-worldly animals and characters, all brought to life through the incredible skill of Henson’s creature shop. Sometimes puppeteers (muppeteers?) were walking on stilts. Sometimes they were almost entirely doubled over and shimmying across the floor. Some suits were fitted with tiny monitors so the performers could see their performance from inside the darkened costume. Sometimes they wore suits so heavy and intricate they periodically had to be hung up on a rack (while still inside the suits) just to relieve pressure on their spines. These are some of the most complex creature designs ever seen (even by present-day standards), and they needed to be in order to help the audience slip into the world and not be distracted by the artificial nature of it all. 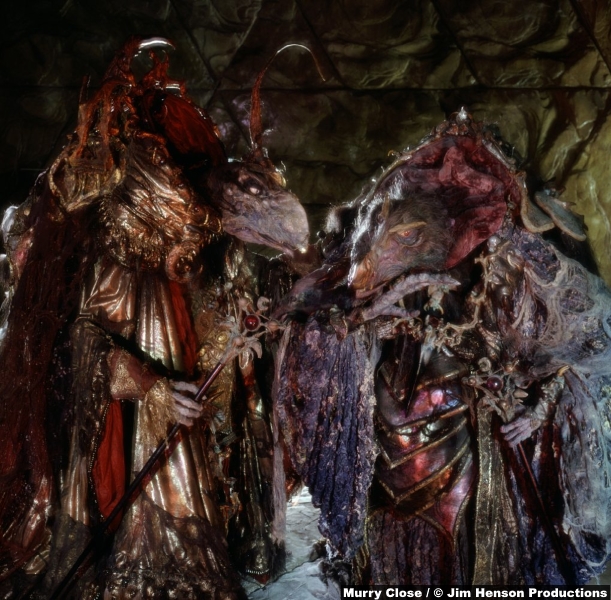 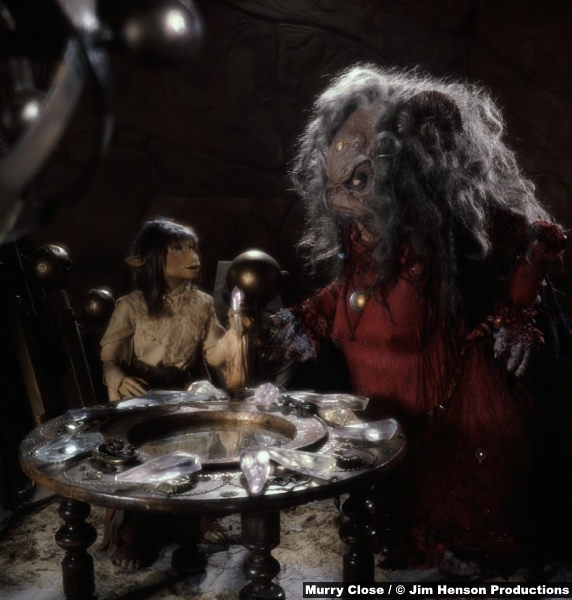 Henson and his daughter mapped out the basic plot while stuck at an airport. The idea is based on Seth Material (google it, it’s weird) and the idea of a perfect entity being split into two parts, one good and one evil. The good side in the movie is represented by the spiritual Mystics and Gelfings. The bad side is presented in the form of the Skesis. The Mystics are monk like beings, while their evil counterparts are worldly, passionate, materialistic brutes. What makes The Dark Crystal interesting is that the ultimate goal of the story is not to kill the bad guy, but instead to merge both sides—good and bad—back together. At the end of the movie (spoiler alert) the heroes bring the shard of the dark crystal back to its source, with one of them dying to do so. The crystal reacts to being restored by causing the Mystics and the Skesis to merge into a unified race known as UrSkeks. These new, heavenly creatures bring the fallen hero back from the head, and allow the Gelfings to walk the newly-rejuvenated land as its protective race. 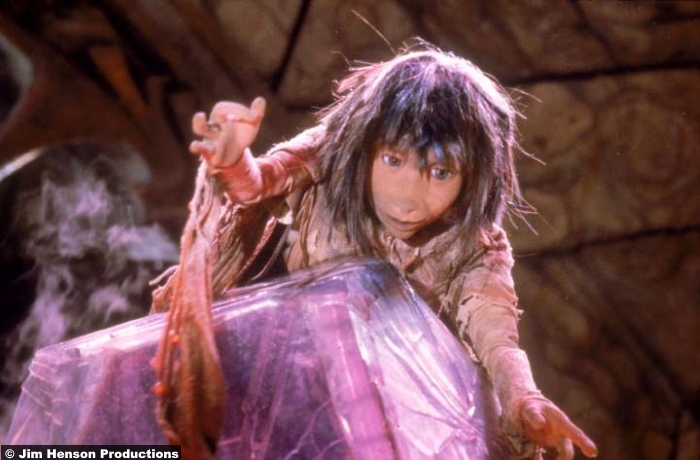 It’s an ambitious story, wholly original in content and in the way Henson and crew brought it to life. Henson co-produced it along with ITC (a British Television company), with Universal agreeing to distribute the film. Gary Kurtz, fresh off of producing Star Wars and The Empire Strikes Back left Lucasfilm behind (pushed out by George, but that’s another story) and chose this to be his next movie. In all, over five years was spent developing the ambitious project, with Henson hoping it would spawn into a series of films. The film was put together with only a fifteen million dollar budget (The Empire Strikes Back had almost twice that two years prior) in the hopes that it would have a low bar to clear in order to turn a profit.

It was released on the weekend before Christmas, but unlike today that was one of the busier times for big releases. 48 Hours, Gandhi, Tootsie, Airplane II, and the sixth Pink Panther movie were all released that month and Dark Crystal had enough headwind anyway with its subject matter being hard to condense to a thirty second TV commercial or even a two minute theatrical trailer. Parents assumed the movie would be “too dark” for their kids, teenagers thought it would be “too childish” due to the names attached to project: Henson and Oz. Critics were mostly indifferent to it as well, with some dismissing it as a Lord of the Rings knockoff, though almost everyone rightfully praised the effect work done to bring the film to life.

In the end the movie earned forty million dollars, which maybe gave it a slight profit, but (in the eyes of executives) not enough to justify the half-decade spent developing it. Henson’s plans for a sequel were scrapped, though he did try again with another fantasy epic: the delightfully bizarre David Bowie-led “Labyrinth.” Dark Crystal came and went, however, and never really developed the kind of cult following that other forgotten classics like Conan The Barbarian did. Its fans remain loyal defenders, but its fanbase has not really grown over the past three decades. The movie is one of those that many people have heard of (in a “Oh yeah, I think I know that movie” sort of way), but few have ever sat down to watch.

But watch it you should. It’s a true work of art, a genuine passion project by one of cinema’s most wonderful imaginators, and film every fantasy-lover should not only watch, but turn others onto as well. Unlike a lot of fantasy movies from years gone by, the love and care put into The Dark Crystal‘s special effects have made it timeless. It’s still engrossing as it was in 1982, still fun, still remarkable to behold, and still awesome…thirty five years later.