We started in January with Conan the Barbarian (see our stream of consciousness rewatch here) and then followed it up in February with TRON (look back on its legacy here). In March we reminisced about The Secret of NIMH, a classic fantasy from the legendary animator Don Bluth (click here to read all about it). In April we talked about the forgotten gem The Sword and the Sorcerer (we reflect on its overlooked history here), and in May we celebrated the great Jim Henson passion project, Dark Crystal (read all about it right here). June and July featured Sylvester Stallone hits, the First Rambo movie, First Blood, and the third Rocky movie, and last month we looked back on the gem of the Star Trek movie franchise, The Wrath of Khan.

Later this year, Blade Runner 2049 will return to the futuristic-noir, smog-filled, weirdly moody world first brought to theaters by Ridley Scott in a 1982 box office disappointment. 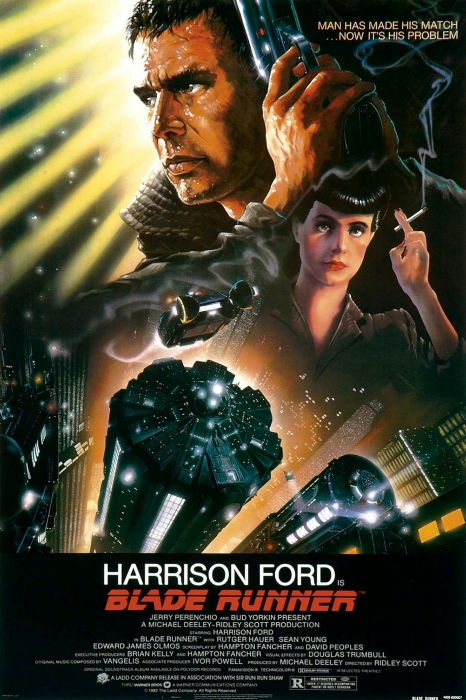 Blade Runner is, today, considered a classic in the genre, but at the time it was met with bewilderment by critics and general disinterest by casual movie-goers. The movie grossed about 30 million dollars on a budget of about 30 million dollars, but—as Hollywood accounting often goes—the film ended up losing money after other expenses were tallied. Critics who praised it often spent half their reviews defending the movie from what they knew would be the biggest detriments to its success: The dialogue is oddly detached, like the whole thing is a dream. The pace is extremely measured; it’s easy to imagine a non sci-fi fan in 1982 being wowed by the special effects in the opening minutes but eventually drifting off to sleep. And despite being marketed as an action/adventure, the plot is much more introspective and even though the climactic showdown between Deckard and Batty has plenty of thrills, the movie ends, not with a pat “hero gets the girl and rides off into the sunset” finish, but with a contemplative “wait…does that mean what I think it means…?” open-question about Decard’s humanity (or potential lack-thereof).

Looking back, it’s easy to see why the movie failed to take off. 1982 was a year when the big movies were pretty straight-forward. The biggest film of the year was E.T., which, for all its sci-fi leanings, is a pretty basic adventure movie. The second-biggest hit was Tootsie, which—while hilarious—is about as simple a concept as you can get. Porky’s, 48 Hours, Gandhi all are easy to summarize. Blade Runner can be summarized in a sentence, but it doesn’t help much:

An ex-cop who specialized in hunting down rogue robots that perfectly-mimic people is brought back to find four escaped robots who want to find their creator and extend their life.

That’s the plot, but it’s not exactly…rousing. It doesn’t convey the two greatest strengths of the movie, only one of which is appealing to the casual audience. The movie had going for it some of the best non-CGI effects work in movie history and a “hard sci-fi” story that asks questions more than it shoots lasers. Audiences would dig the effects, but the plot would turn them off, and as Valerien proved this year, you can only go so far on special effects. Movie-goers are far more willing to tolerate bad effects and an easy story than a tough story with amazing effects.

And yet, the film slowly rose to “cult hit” status, and has come to be appreciated as one of the best “big production/hard sci-fi” movies ever produced. 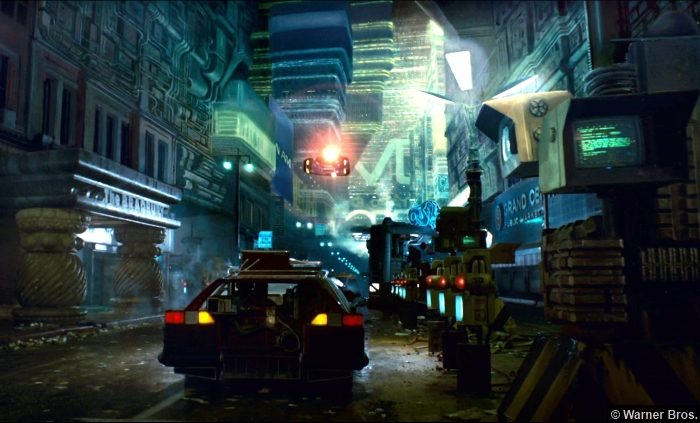 That the movie ever made it to release is a minor-miracle. The first cut of the film was over four hours long. It meandered around with unfocused dialogue and no clear, driving action moving the story along. The early cut was so incomprehensible, the studio decided a voice-over narration was needed to explain the plot as it progressed. Even as the movie was cut down to under-two hours, the voice-over stayed. Harrison Ford was so against the idea he purposefully did the worst job possible, assuming his poor take would force the studio to scrap the narration. They didn’t, and one of the movie’s biggest complaints was that it was confusing to follow, and boring to have explained. The long shoot, which went way over budget, and the ghastly initial cut of the film, actually caused Ridley Scott to be fired for a time. Meddling producer Bud Yorkin stepped into to supervise post-production and editing but Scott was eventually brought back onto the picture when executive Alan Ladd Jr. insisted he return. Nevertheless, Yorkin retained control over the final cut (complete with terrible narration) which bombed with test screenings.

Under normal circumstances the movie would have died in the summer of 1982, never to be heard from again, outside of a small fanbase. Ridley Scott never gave up on the film, however, and has called it his favorite and most complete film of his career, despite disagreeing with the theatrical cut. In 1989 an archivist at Warner Bros. discovered a 70mm print of the movie without the voice-over, as well as several other differences in the editing of the movie. It was screened at various film festivals and was a huge hit, prompting Warner Bros. to re-release the movie as a “director’s cut” (though without Scott’s direct involvement). By all accounts the cut was one of several Scott was toying around with before being removed during post-production. Scott said the re-released version was not his vision for the film and more adjustments would need to be made before he gave his own approval to the picture. It would be another twenty years before Scott finally felt truly satisfied with a version of the movie, and it was released on home video as “the final cut.” By this point, seven different versions had been released in one form or another, and the movie had grown to mythic status, in part ironically because of the very troubled and unresolved production that doomed it in its first run.

Having grown up with the movie, and having seen at least five different incarnations of the film, I can’t help but wonder what it must be like for someone to sit down and watch any version without any background information. Would they still admire the special effects for what they were as a product of their time? Movies like the Star Wars Prequels will only get worse over the years, as the technology on display grows more and more outdated, but the practical effects on Blade Runner (where every trick in the book was implemented) have stood the test of time, with only a few moments that give away the 1980’s production. Would they be able to sympathize with Batty and his search for (longer) life, despite his psychotic actions? Would they appreciate the subtlety to Deckard’s story? Would they pick up on the minor hints (in some cuts) and more overt hints (in other cuts) that point to whether Deckard is a replicant or not? Harrison Ford always insisted that he was not, but Scott was just as adamant that he was. The split helped the ambiguity as the director was shooting things from one perspective while the actor being shot was playing things from another perspective. 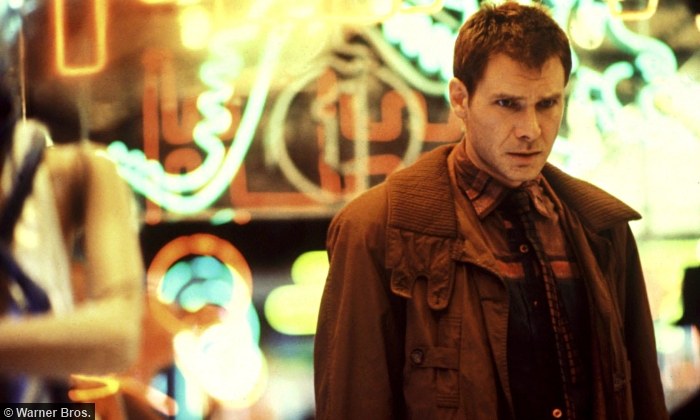 I think viewers new to the movie would still enjoy it. This is an era where a lot of older movies are getting sequels and/or reboots, but most of them are met with shrugs from movie-goers, if not outright rejection. Blade Runner 2049 is coming October 6th, and it’s one of the few reboot/sequels that fans are frothing at the mouth to see. If that doesn’t speak to the endurance of the original, nothing does. This is a movie that continues to be talked about, watched, analyzed and debated, and that alone shows that it has a special quality that makes it timeless…