The Secret of NIMH is still awesome, 35 years later…

This year, Cult of Whatever is looking back on some of the great movies of 1982. It’s been thirty-five years since these films first captivated audiences. Some of them were blockbuster hits, while others needed a few years on home video to find their groove. Whatever their box office intake, these movies are genuine classics and deserve recognition. We started in January with Conan the Barbarian (see our stream of consciousness look-back here) and then followed it up last month with TRON (look back on its legacy here).

The story of this next film begins a few years before 1982. Throughout the 1970’s, Walt Disney’s Animation department was in a creative slump. Movies like Robin Hood, The Aristocats and The Rescuers performed well at the box office (though not as strongly as their 1960’s films), but critical reception was not as good as it once was, with many films receiving mixed-reviews at best. At the end of the decade, during the production of The Fox and the Hound (another film that raked in money in spite of mixed reviews) a trio of animators left the company, led by an outspoken maverick named Don Bluth. Soon after, several others on the animation staff followed suit. In total thirteen left, following Bluth and the dream of bringing animation back to respectability.

Bluth had grown discontented by what he saw as a lazy approach to filmmaking compared to the studio’s heyday twenty-five years prior. Walt Disney died in 1966. Roy O. Disney (Walt’s brother) took over as head of the company, but he lacked the vision and leadership gusto of Walt. After Roy died, Donn Tatum took over as chairman, but his focus was more on developing the new Walt Disney World theme park in Orlando. As a result, animation took a back seat. In 1977, Roy E. Disney (Roy O.’s son) resigned in protest over the decline in quality of the animation department. The old hands that basically wrote the book on animation (the so-called Nine Old Men) were still around, but they were mostly figureheads by this point. Unfortunately, new ideas from younger directors were often ignored. Meanwhile the top of the Disney food chain was pressuring the animators to work faster and cheaper to justify the expensive and slowly-developed animated films. This led to the era of recycled animation (which was a common occurrence from the beginning of animation, but was taken to an extreme in the seventies as animators were trying to get their product out as quickly as possible) and animation with fewer frames per second.

It was this bureaucratic mentality and assembly-line-style filmmaking that Bluth wanted to get away from. He wanted to get back to making art and stories with strong themes that resonated with audiences long after viewing. Disney was content pumping out glorified “cartoons.” It’s here where Bluth’s own Walt-like vision shines forth: Lesser men would have been content to make a project that was “retro.” Lesser men would have copied sights and sounds from the past and tried to get by on mere nostalgia. Bluth wasn’t like that; he wanted to apply the old ideas to new stories and he wasn’t afraid to try new techniques that older animators might’ve balked at. More than anything, Bluth wanted to make a movie that could spark a genuine impact on the mind of a child. Disney was content with flighty, hollow and inconsequential movies. So Bluth left, and he took with him an idea for a fantasy adventure about a mouse family. Disney had rejected the idea without even seriously considering it, famously telling him “we already have a mouse and we’ve already done a mouse movie.”

Bluth scrounged together enough funds—even risking his home—to work up test footage to pitch to other studios; United Artists signed on. Whereas Disney declined in the 70’s, UA was having a fantastic decade, with multiple best picture oscars and huge box office hits peppered throughout the 1970’s. They signed Bluth hoping to start up an animation wing that would rival and eventually overtake Disney.

The infamous mega-flop crippled the studio’s finances and forced them to sell their assets to Tricinda, the company which also owned MGM studios. Soon after, Tricinda merged their two film divisions into one: MGM/UA. Unfortunately for Bluth, his new bosses weren’t as keen on animation as UA had been. The budget for The Secret of NIMH was cut down considerably compared to Disney’s usual outputs and the release date was moved from August (where competition was scarce) to right in the middle of one of the busiest and most-blockbuster-heavy summer’s in history. Rocky III, Star Trek II, and Poltergeist all proceeded it, and E.T. was still dominating months after release. Blade Runner came out the weekend before. Of course, some of those movies are more suitable for teenagers and adults, so they shouldn’t have been competition for Bluth’s debut picture. 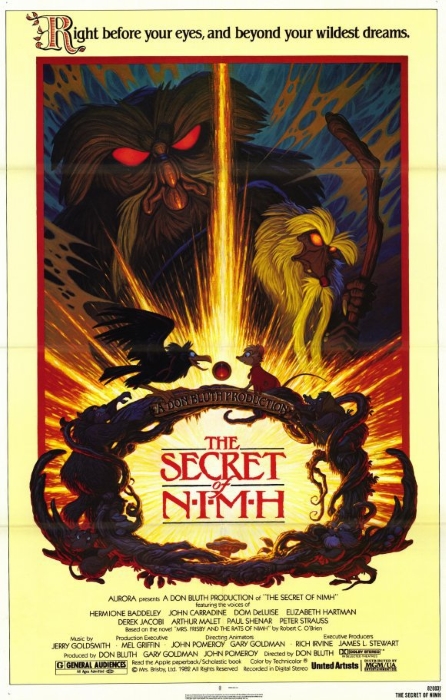 Except Bluth had wanted The Secret of NIMH to be a PG-rated animated film for all ages. Remember that there was no PG-13 rating back then. A film was either G for kids, PG for everyone, or X for adults-only. Bluth wanted PG because in those days the rating was a big tent that included everything from movies for 10 year olds to movies for adults that weren’t terribly violent or offensive. He had faith in his story and in the way his team had animated it and he thought it deserved special recognition. Instead the ratings board recommended a G rating and MGM/UA opted not to insist on a PG rating (which they could have, and likely would have received), meaning the movie was instantly presumed to be a kiddie movie with little depth…exactly the kind of movie Bluth left Disney to get away from.

And exactly the kind of movie The Secret of NIMH was not. 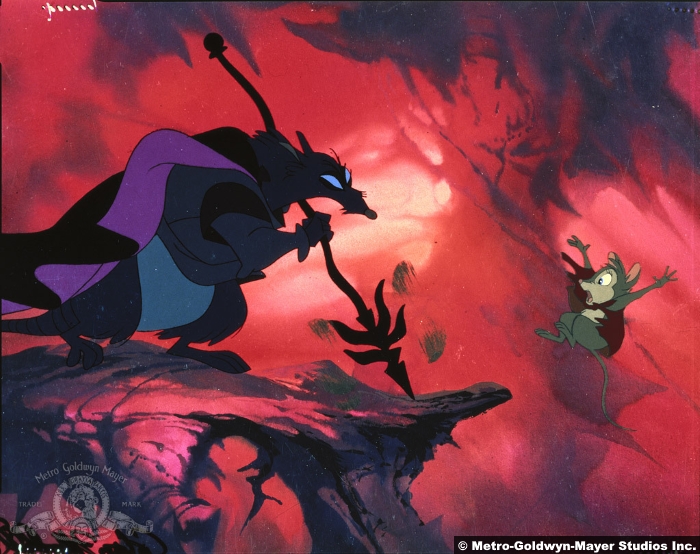 The film was amazingly balanced: It was serious but not without fun. It was weighty but never depressing. It was introspective but not obnoxiously self-important. It was occasionally terrifying but never so scary that children would turn away from it. Instead it was just intense enough to leave a lasting impression on a developing mind. The plot involves a race against time, as the mouse family lives in a house on a field that will be destroyed when plowing time comes…and plowing time is drawing near. As the mouse family prepares to move, the widow matriarch has to contend with a son battling pneumonia. He can’t leave his bed, lest his condition worsen and he die. That’s not a grown-up reading between the lines either: those are the words spoken early in the film, informing little ears that in reality, sometimes kids get sick and sometimes they die. 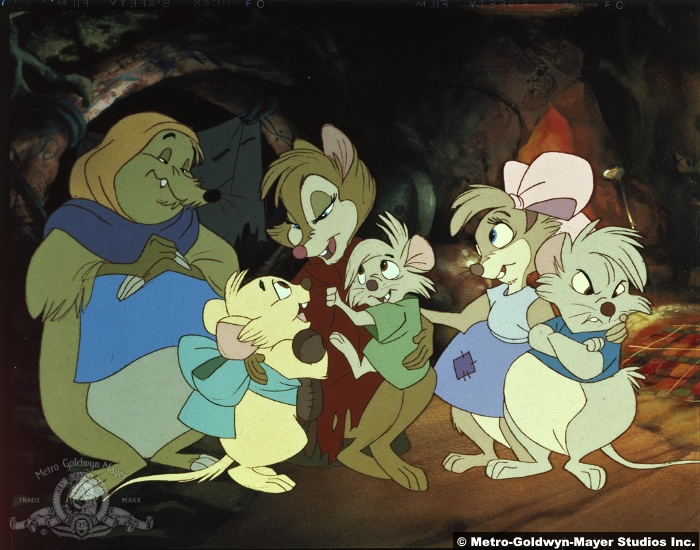 Of course mama mouse, Mrs. Brisby, sets off on her adventure to see her son recover and move in time before the plowing begins. I say “adventure” but what’s startling about the movie is how little ground it actually traverses. Everything takes place within the confines of field soon to be plowed. Mrs. Brisby visits a mysterious owl, enters the dangerous dwelling place of the brutish rats and flees the clutches of the family cat, Dragon. There’s also the heroic Justin (with his shades of Errol Flynn’s Robin Hood) and the scheming Jenner (almost a prototype of The Lion King‘s Scar), who clash in the film’s climactic sword fight. There’s plenty of adventure to be enjoyed, but the fact that your attention will be held despite very few changes in scenery is a testament to the story (adapted from the novel “Mrs. Frisby and the rats of NIMH”) and to the gorgeous animation that used none of the lazy and time-saving tricks that Disney was relying on.

Remember that MGM/UA ordered Bluth to turn in a movie on a limited budget: Disney’s The Fox and the Hound (the project Bluth and his followers abandoned to go on their own) ended up costing Disney around twelve million dollars. Soon after The Secret of NIMH, Disney began work on their own ambitous fantasy animation movie, The Black Cauldron, with a budget of forty-four million behind it. Bluth only had a cool seven million at his disposal (and some of it was self-financed). Furthermore he only had thirty months to work with, about half the time Disney’s animated films were given for development. And yet, despite so many opportunities (and excuses) for the film to look cheap or subpar, the end result is one of the most beautiful animated films of its era. Every scene has a shot or three that is worthy to be printed, framed, and hung on a wall. 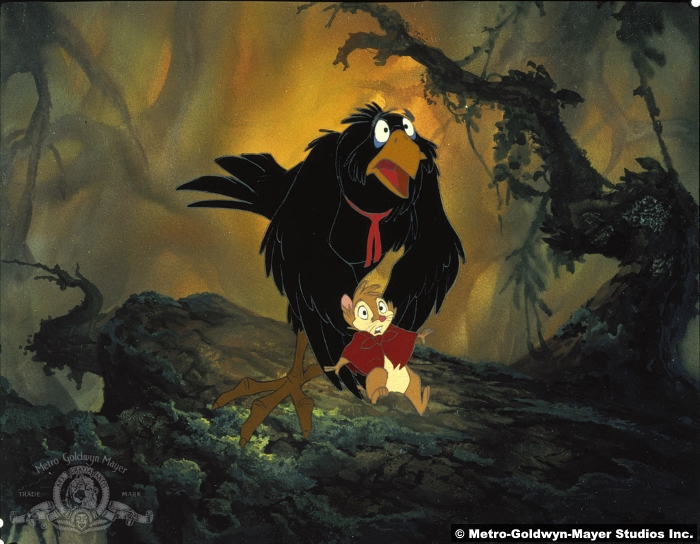 Critics adored it, hailing it as the best animated film in a generation. Unfortunately, due to poor marketing, a bad release date and a studio that didn’t seem to care if it succeeded or failed, The Secret of NIMH was not initially successful. MGM/UA actually opened the movie in less than one hundred screens and expanded it very slowly (in a cost-saving measure). Even then the biggest release weekend saw it open in only seven hundred screens (half the number for a true “nationwide release”). The roll-out was so slow, in fact, that by the time it finally received those sightly bigger releases, the limited advertising budget had been spent and people basically forgot about it. It ended up grossing only fourteen million dollars in theaters and never came to be a truly profitable movie until it found a second life on home video.

Bluth left Disney with the idea that profit wasn’t everything; that the “art” of the movie needed to be preserved. In the end he helped to craft a movie that was a true work of art, but one which—fittingly, I suppose—failed to turn a profit in theaters.

MGM recently promised a live-action/CGI remake was in development (of course they have), slated to be released sometime in the next couple years. Likely it will come and go with little fanfare. Likely it will lack the charm of Dom Deluise or the creepiness of John Carradine or the sublime moody colors that populate the background to every scene. It will probably not have the almost-nightmare fuel of Nicodemus’ eyes, or the occasional rotoscoped scenes that give characters an almost-dreamlike fluidity in their movements. It won’t have the passion that Bluth poured into the project; a passion that earned his movie critical acclaim but little box office success.

Nevermind any sequel, reboot or remake. Thanks to the magic of home video, we can look back on the film that was and say The Secret of NIMH is still awesome…thirty-five years later.