The Sword and the Sorcerer is still awesome, 35 years later…

This year, Cult of Whatever is looking back on some of the great movies of 1982. It’s been thirty-five years since these films first captivated audiences. Some of them were blockbuster hits, while others needed a few years on home video to find their groove. Whatever their box office intake, these movies are genuine classics and deserve recognition. We started in January with Conan the Barbarian (see our stream of consciousness look-back here) and then followed it up in February with TRON (look back on its legacy here). Last month we reminisced about The Secret of NIMH, a classic fantasy from the legendary animator Don Bluth (click here to read all about it).

Another fantasy movie makes the list this month, but it’s probably the least-known film of the twelve. The Sword and the Sorcerer is not based on any famous fantasy novel. It isn’t a beloved property being resurrected or adapted or re-imagined. It’s a wholly original fantasy movie from writer/director “Albert Pyun.” Who is that, you may ask; he’s a B-movie director whose most famous film is probably the 1990 Captain America cheesewhiz flick. He’s also a protege of Akira Kurosawa, and if you don’t know who that is you should remedy that immediately. Lots of directors got their start directing schlock and ended up making it to the big leagues, but sometimes a B-movie guy just remains a B-movie guy. Pyun also had a bit of a reputation as an abrasive person that others didn’t like to be around. Still, for a time he was seen as an up-and-coming guy to watch and was pegged to helm the sequel to Masters of the Universe before that project fell through. He never really got the chance to direct any big-time films, leaving The Sword and the Sorcerer as—unfortunately—his biggest work. 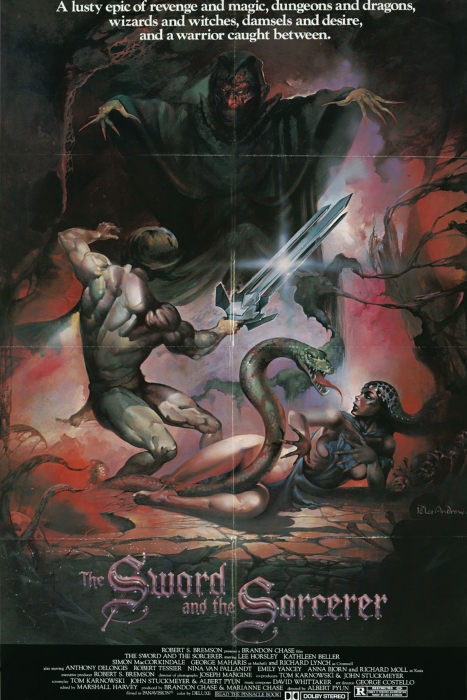 All that said is not to diss The Sword and the Sorcerer, but it does help to explain—at least in part—why the film never found a footing when it was released in April of 1982. It wasn’t a bomb, in fact it was the most profitable independent film of the year (making forty million on a budget of four), but critics never gave it the benefit of the doubt that went to other films. Its poor reputation was established before it was ever seen and subsequent reviews were terrible, which made it hard to find its footing with picky theaters that had limited screens. 1982 was a famously crowded year with lots of big movies coming back to back to back with little breathing room in between. A little indie fantasy movie (which was, itself, a blossoming sub-genre in this decade) was never going to stand out.

Porky’s was the big movie going back to March of that year and it would hold the #1 spot at the box office until Conan, Rocky III and Star Trek II all took turns at the top. After that the year belonged to E.T. and by Independence Day, no one remembered The Sword and the Sorcerer had ever been released.

And that’s a shame because it’s a true “diamond in the rough” sort of movie. 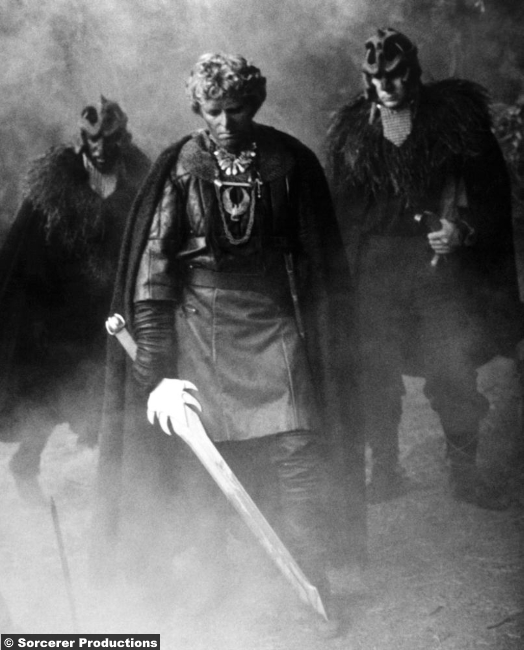 The first thing you have to accept about The Sword and the Sorcerer is that it being a low budget movie is part of the charm. If you can’t get past the cheapness of it, you won’t enjoy it. If you can set that aside, as well as the limitations it causes you’ll find a good time to be had with it. And the budget certainly does cause limitations: Unlike Conan and other fantasy movies of the 1980’s (Legend, Willow, The Neverending Story, etc), there is no famous person, place or thing that this movie is tethered to, which is why it was so quickly forgotten and remains so. Legend stars Tom Cruise. He was no one then, but he’s an A-lister now; ditto with Conan and Arnold Schwarzenegger. Willow had Val Kilmer and George Lucas attached to it. The Neverending Story was a famous children’s book.

Who’s the big star of this movie? Lee Horsley?

Also the budget meant that the big action sequences had to be mostly stripped down and simplified, despite the magical setting and circumstances. There is a famous weapon featured in the film called the Triple Sword, that has three blades which launch from the hilt like Link when you have full hearts in The Legend of Zelda. It’s an idea that feels like what a child would conjure up while playing at recess. It’s hokey but fun for the genre. Sadly the budget undercuts it and everytime the sword does its thing it feels like placeholder footage before the effects are added. There’s a sound and someone goes flying backwards but you don’t actually see anything. 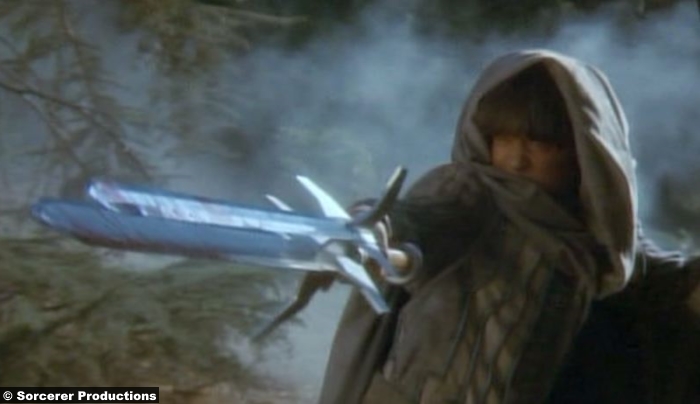 In addition, there’s not much by way of scenery here. A lot of the movie is filmed on sound stages with poor lighting, giving the movie a very dark and ugly look to it. Sometimes it works, like in the opening scene as the wicked Cromwell enters the cave of Xusia, an evil sorcerer that looks more like a blood-stained orc from The Lord of the Rings. Other times, the cheap sets and bad lighting make it almost hard to follow the action, forcing you to rely on a screenplay that was only ever meant to do just enough to get by.

AND YET, despite so many reasons to hate it, there is enough reason to love it.

The movie cares about its characters more than glitz and style. There’s a real plot to be found here, with envy and lust, revenge and heroism at the forefront.

Cromwell summons the aid of Xusia in overthrowing his rival, only to stab his accomplice in the back (literally!) once victorious. Xusia survived the double-cross, however, but took a decade to recover. In the meanwhile, Cromwell became a powerful tyrant. He made a fatal mistake however, in leaving the son of his rival alive. That son grew into a Han Solo-type mercenary (named Talon) with no knowledge of his heritage. The story comes to ahead as Talon discovers his origin just as Xusia is seeking his own vengeance. Talon slays the wizard/demon man and defeats Cromwell; he then refuses the crown of the kingdom, deciding to remain a hero-for-hire in search of further adventure. 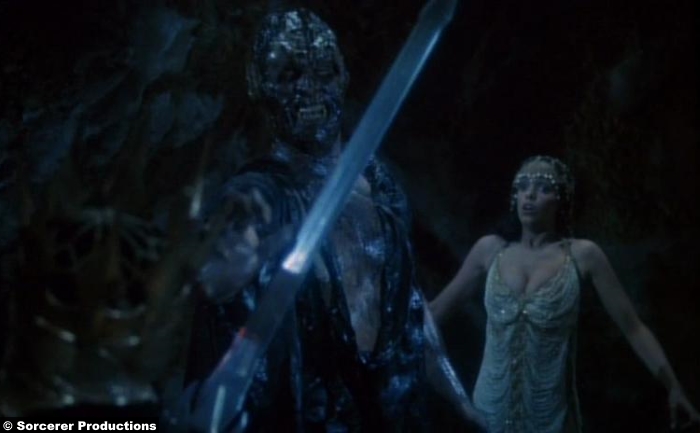 The movie ends with the promise of more story to come, and even the credits throw out a “James Bond will return in ____” style teaser, promising a sequel entitled “Tales of an Ancient Empire,” presumably to be released later in the decade. Instead the movie failed to make a lasting impression with audiences and any hopes for a sequel disappeared with it. In 2010, Pyun did finally make his Tales of an Ancient Empire movie, but by that point it featured a brand new story and cast and will probably not be remembered fondly in decades to come. 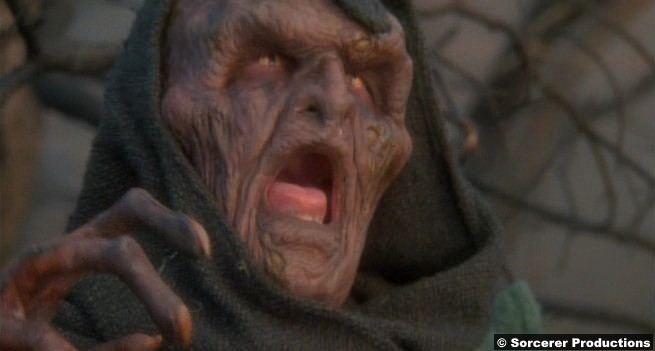 Obviously the big medieval fantasy film of the year was Conan, but arguably The Sword and the Sorcerer does the genre more justice in almost every way. There’s more nuance to the characters, more narrative focus to the story, more dialogue to be heard and more plot twists to be found. The only thing Conan has on this movie is the scenery; Conan is beautiful while this is a bit drab.

Still, if there was ever a movie that deserved a second look, especially from fans of 1980’s fantasy, this is it. It’s never on cable, it’s never on HBO. You won’t find it on Netflix and you can’t stream it on Amazon Video. It’s a lost movie, but if you can find it give it a chance.