Preacher S02E12: On Your Knees – The show uncomplicates its boring chaos, with typically mixed results

Over the last the last two months and change I feel that I’ve become quite adept at pointing out where Preacher has gone wrong. Week after week it has become the one show that I dread watching, knowing that it has the potential to be something really special. The cast is universally strong, the direction, score, set design, and knowingly ropey special effects are great, but the continued weakness of character and story sink Preacher into the swamp of its own making.

What’s really strange is that this complaint only encompasses the heroes of Preacher: Jesse, Tulip, Cassidy, and Eugene. Each are played by talented performers, and I wouldn’t recast any of them, but they have been lumbered with some absolute shit this season; which is really saying something after season one’s fart bomb. Each character is as trapped in their own plot as the Saint of Killers is in that truck. 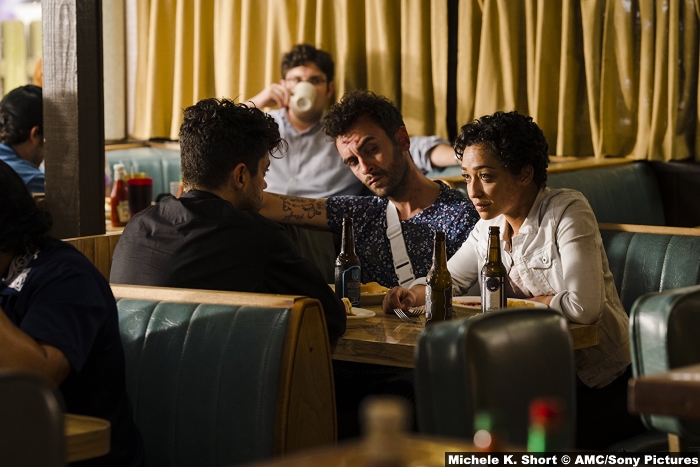 Jesse has seemingly fulfilled his quest to be the most humbly self-obsessed asshole on television. It’s not all his fault that he believes that he can be the world’s saviour, he thought he could be Annville’s too. It’s the expertise of Herr Starr that plays on this saviour complex that Jesse has, as well as playing on how Jesse isolates himself from his friends. Starr’s plan was clever, but when you zoom out and see each piece fall into place, it didn’t take that much effort to break up the crew. The rot had already settled in before Starr knew any of them existed.

Tulip has had a better season than the first. Not because her story has been any better, only that Cassidy’s has been much worse. If I was Ruth Negga and Joseph Gilgun, I would be going crazy at the lack of effort put into their characters. Tulip has been walking around with ill-defined PTSD, and the pay-off when she faces the Saint again is really underwhelming. Cassidy has been sleep-walking through Standard Vampire Plot 03, but at least we got some more on that baby foreskin conspiracy. You just know that will come up in season three, I’m joking of course.

Even the show seems to realise how much these two have been wasted. It comes up twice: firstly, Hoover and Featherstone are obviously bored watching them have a conversation (as was I), and secondly, at the end of the episode both Tulip and Cassidy leave Jesse because they don’t feel needed. Now, if you have read a single issue of the comic, you will know how big a disaster this three-way non-friendship is on-screen. In the comics, we actually got to see these characters form bonds with each other, something that has barely happened this season. Which means that Jesse being alone at the end, and so clearly Starr’s pawn, is more inevitable than impactful. The only consolation is that if the gang gets back together, the dynamic will have changed. What On Your Knees does is finally end this part of the story, with a whimper.

Now, a question. Have you ever watched a show were you really want the villains to win? Let me clarify that I don’t mean shows led by anti-heroes, shows in which the villain is the main character like Hannibal. What I mean is do you actively root against the good guys? That’s how I’m starting to feel about Preacher. I want the Saint of Killers to kill everyone. Failing that I want Herr Starr to win. Don’t get me wrong, I think each of these men are deplorable, and I wouldn’t want them to exist in real-life. This isn’t real life, this is entertainment, and the villains, no matter how disgusting they can be, are more entertaining.  I support them for the exact reason I should be supporting Jesse and co: these villains are well-defined characters. 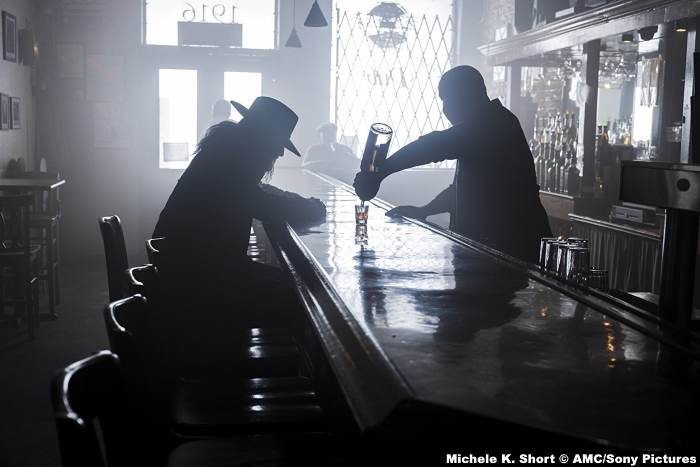 Take the Saint, who finally makes his return in this episode. He’s not just an unstoppable killing machine, he’s not just a killer full stop. He is these things, but he was also a loving father and husband, and, on a quest to save their lives, the evil that he wrought in his past caught up with him. Loving father, to the man with a bag of child’s heads as a conversation opener. The Saint may be a monster now, bu t the show treats him as something much more complex. Even though his latest confrontation with Jesse ended on a convenient note, the stakes were higher than they’ve been in weeks. Why? Because the show puts time into the Saint’s characterisation.

It’s the same with Starr, and the Grail as a whole. In half the time Featherstone and Hoover already feel more solid than the people they are spying one. Starr is the grand puppeteer, with pull all the way down to Hell itself. Even with the very limited time spent with the members of this organisation, the show’s writers have a sense of purpose and detail that is severely lacking in the writing of their heroes.

6/10 – On You Knees is an improvement overall. The dull breakup of the main trio is finally over, Eugene and Hitler are on the move, and Herr Starr has what he wants. It’s a table setting episode, making preparations for the finale, but the fact that things are moving forward is a nice change of pace. It’s hard to imagine that the finale will make season two seem worth the bother, and there is still no word on whether the show will be renewed, but I hope it will. I also hope for a season three, keeping the Grail around and finally getting to the road trip the show always should have been. The problem is that Preacher doesn’t deserve a third chance.