Last week’s Preacher was the best episode the show has produced to date. It was smart, tense, scary, funny, all those usual positive adjectives, but it was also the end of season two’s first story arc. Or if not the end it’s at least the postponement of it. The Saint of Killers has been dealt with, but not permanently, and his campaign of pant-wetting, finger-slicing terror has had major consequences for our misfits. Pig is an episode of transition. It’s an episode that has the job of addressing the consequences of the Saint, while also fully introducing the shows new villain properly: Herr Helmut Starr. It’s safe to say that one plot works much better than the other.

So, before we dive into the depraved depths of The Grail’s head honcho, and how he could be exactly what the show needs, let’s address the ten-foot tall cowboy in the room. Jesse, Tulip, and Cassidy start of Pig well enough. For a hot minute, I thought that the searing pace of last week would be replaced by some much welcome down-time: an opportunity for the actors to deepen their characters a little without the pressure of the seasons plot to deal with. This is exactly what happened, and the results were mixed.

The scenes in the Hurt Locker, a tourist attraction previously mentioned by Cassidy, where people pay to be shot was a very Preacher-like detour into the surreal charms of New Orleans. The fact that Jesse and the gang used the situation as an opportunity to gleefully cheat everyone involved out of their booze and money was an added bonus; as was the fact that we don’t have to visit anymore jazz clubs because that lead is thankfully dead. Then the high dissipates, and we are left with a group of people that are emotional, and physically scarred by their encounter with ultimate evil. 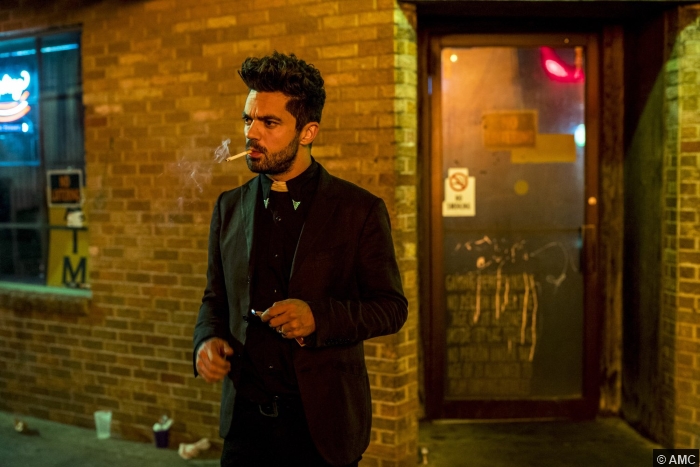 As usual, Tulip is the character that interests me the most: as her contact with the Saint has knocked something inside of her off-balance. The physical touch, with his blood-stained hands round Tulip’s throat seems to have psychically wounded her to the point where she is having PTSD dreams, and waking hallucinations. Of this plot, Tulip’s repeated visions of The Saint are the highlight of the episode as it allows the show to lean into its horror elements while also finding a way to keep Graham McTavish around, which I’m all for. As Tulip tells Jesse, she would have died if it wasn’t for Cassidy, that Jesse was ultimately too late. While the reactions of both Tulip and Jesse are valid here: Jesse did have his hands full, this feels like yet another way to keep them distant from each other. This would have more impact if we had a little more of Jesse and Tulip’s good times. As it stands, I’m starting to wonder why they’re even together in the first place.

As for Jesse, he sparks up a conversation with a lowly street “prophet” who has styled himself, as they all do, as a harbinger of doom. With Jesse ou of ideas he enlists this man to help him understand his search for God. While Dominic Cooper plays these scenes well, the conversation comes across as a lazy piece of amateur psychology. The basic function of a conversation is to be a way to move the plot forward, and that doesn’t really happen here. All we find out is that Jesse even giving up a little of his soul is bad. No shit dude, give Jesse that beer back you’re bloody useless. Cassidy doesn’t fare much better, but at least there is a laugh to be had at his accidental “death”. His refusal to grant his son immortality is one of the most tired stories you can tell about a vampire. 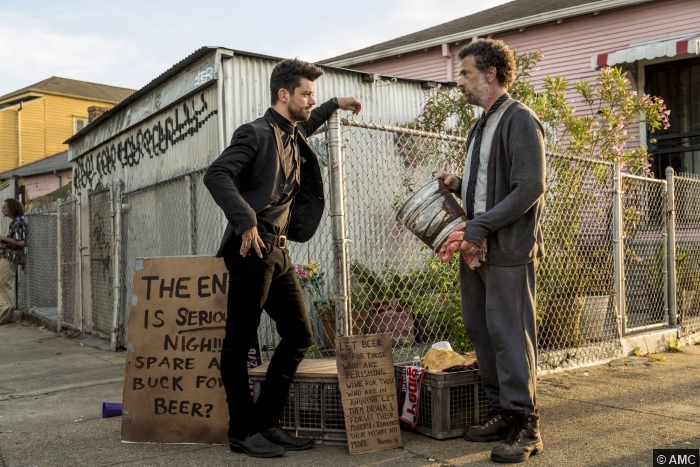 So, all in all, this half of Pig is a mixed bag. The other half is outstanding. Herr Star is my favourite antagonist in the comics, so to see him make his full debut is a fanboy dream of mine finally realised. AMC has just found its newest bastard. As The Walking Dead proved with Negan, it’s very difficult to create a character that is so deplorable, a character that you can’t ever root for,  but is still utterly watchable. Negan has all of the attitude and swagger, but none of the sincerity of a true asshole. Part of that is due to Jeffrey Dean Morgan’s performance, as well as some shoddy writing. 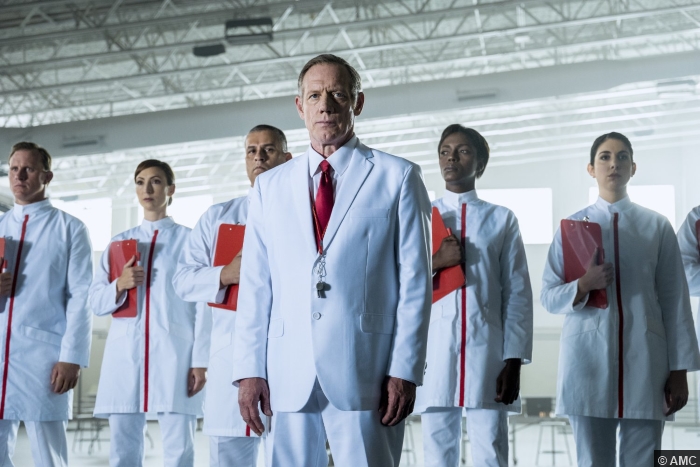 Pip Torrens has just wiped the floor with Negan. Not only is Herr Starr a rude, lewd, homicidal pervert, he is a compulsively watchable one. If there is one thing Preacher does really well, and this week it’s just this one thing, it’s that it knows how to introduce its villains. While Starr’s introduction isn’t given the same time or care as that of The Saint of Killers, it’s just as memorable. Torrens, who has made a career of playing stern characters high on their own authority, is a fantastic find for the show. Much like Graham McTavish, Torrens never crossed my mind when it came to casting Herr Starr, but he has proved an inspired choice. With the kind of face that is calibrated to express only disdain, Starr threatens, murders, and validates his parking, as he rises to the top of The Grail in what I’m guessing is record time. The parallel of his origin to that of the miracle pig he is investigate is a clever showcase of the threat he will pose to Jesse in the future. This a man who promotes himself through murder, a man that will kill an entire village to discredit a miracle that threatens The Grail’s own. He is the man charged with protecting the integrity of the lineage of Jesus Christ, and Jesse is next on his list.

7/10 – While the main plot slows to a crawl this week, Herr Starr’s introduction more than makes up for it. I just wish Preacher was brave enough to devote the whole hour to this monster.