Preacher S02E03: Damsels – It feels like the end of the world in a brilliant set up episode

Episode three of Preacher’s hugely improved second season poses a strange conundrum: how do you actually look for God? The very plot that this season is anchored by is so vague a concept yet sounds so simple. After all, isn’t everyone looking for God in some sense or another? Maybe not consciously, and maybe you don’t believe in him, but what if you found him? These are questions that Preacher, and Jesse, need to think about. God doesn’t seem the type to leave obvious clues, being that he’s all powerful he could easily hide himself in plain sight. So how can Jesse even hope of finding him? Well, I have a theory. 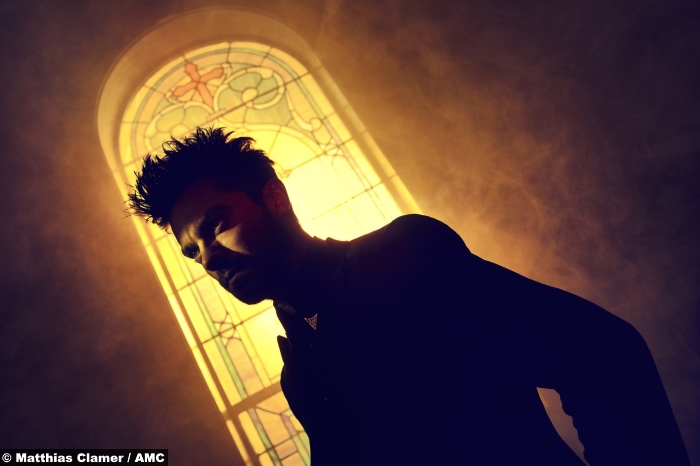 Another question: how is Jesse tracking God? The evidence of his trail is flimsy to say the least. He likes jazz, likes it enough to be remembered for it, but as Tulip helpfully points out you can hear jazz anywhere in the world. So Jesse’s choice to continue his search in New Orleans, a city that may have one of the most narrow visual identities of any location filmed in America, because he’s following the music. Jazz is big in New Orleans. It really is flimsy, but not from a story perspective. There is Genesis to consider here. This investigative technique could have as much to do with Genesis connection to God as its connection to Jesse. There is also the possibility that God wants Jesse to find him, protecting him from the Saint of Killers so they can have their confrontation, because that van getting in the way had to be more that a brutal slapstick piece of luck.

The vagueness of Jesse’s investigation is highlighted shrewdly by Sara Goodman’s script and Michael Slovis direction. When Jesse asks the first bartender where he can find God he, Tulip, and Cassidy are led on a protracted gag that ends with a due in a dog costume. Not only is it ridiculous in itself, and paced brilliantly for maximum surprise, it allows Jesse to realise that he doesn’t have a clue what he’s doing. The rest of the episode has hil lashing out at Tulip (as he’s still sore about the whole marriage debacle), and willing to believe that he’s picked up on God’s trail.

I was a little iffy at Damsel’s central story of Jesse rescuing a literal damsel in distress, but the reveal that it was all a carefully planned scenario mad everything that lead up to said reveal retroactively great. Like Jesse, I wanted to believe that he was getting somewhere and his willingness to be fooled has made him vulnerable to a new enemy.

So who is this new enemy? I’m extremely pleased to have seen the debut of Grail leader Herr Starr. The white-suited bald man that took possession of Tulip’s map in season one has finally, officially, entered the game. Sara Goodman’s scenario, and by extension Herr Starr’s was straight out of a film noir. If you’ve read my Legion and American Gods reviews you’ll know that I think David Lynch’s influence is all over television this year: and it’s happened again. Jesse’s encounter with the lounge singer named Laura (her name is Laura for God’s sake), felt like Preacher’s version of Blue Velvet. Laura, played by new season regular Julie Ann Emery, is a borderline clichie of a femme fatale that there was nothing I could do but sit back and let Preacher stage this weird detour. Thankfully it had a crucial point to it. The Grail are aware of Jesse’s power, and Herr Star, who already has quite a large file on him, is aware of it too.

Damsel’s was a set up episode that was so thoroughly entertaining that you barely notice how little the plot has been moved forward. It’s an episode of teases and hints. We start with Eugene in Hell and by the end of the episode he’s still there. While I’m happy that the situation with Tracey Loach is a lot more complicated than season one suggested: making Eugen a much more sympathetic character, it relegated another Annville character to a mean spirited joke. Despite the gloriously silly introduction of Noah Taylor as Hitler, and a very Twin Peaks (Lynch is everywhere!) looking peak behind Hell’s curtain, the characterisation of Tracey was the episodes only bum note.

Another aspect of the show that has greatly improved is Tulip: mainly that her own story is interesting this time. Another wrinkle of the trio of misfits coming to New Orleans is that it’s Tulip’s old boss’ territory: something that Tulip can’t tell Jesse about because she’s afraid he’ll make it worse. Tulip can’t hide forever as Victor has eyes and ears everywhere; although a handy tip for not getting noticed: don’t be anywhere near Cassidy. The guy has the presence of a lighthouse in the dark of night, everyone notices him. This leads to a confrontation between Tulip and Victor’s men. Again, this is a tease but of the best kind. Just look at how the confrontation is set up: look how many huge men where sent after her. Victor knows how dangerous Tulip is, and with this show of muscle the show reminds us how dangerous Tulip is in the coolest way without her having to throw a punch.

9/10 – Season two of Preacher has shown improvement not seen since Parks and Rec stopped trying to copy the office. The show finally knows what it wants to be: anything.