Last week I ranted about Tulip’s status as Jesse’s love interest and how that severally limits her potential for characterisation outside of this relationship. That doesn’t change much this week, but at least Dallas offers something to grab on too. Tulip may be the subject of the plot but she isn’t the most important part of it. While this continues to frustrate me, I do realise that Jesse is the main character and that he will take centre stage more often than not. So, while Dallas doesn’t fix my main, and only problem with season two, it does continue to investigate one of my favourite aspects of season one: Jesse’s wish to be one of the good guys.

We pick up exactly where we left off last week. Jesse is beating the shit out of Viktor after finding out that he and Tulip are married. While this wasn’t a majorly surprising reveal from last week, and didn’t do much to re-contextualise Tulip’s time in the mansion, Dallas follows up on an assurance that Tulip gave Cassidy in episode two: if Jesse finds out he will make it worse. Which he does. Sent there on Cassidy’s tip, more on him in a little bit, Jesse goes in Word blazing and only gets more violent when he realises that tulip isn’t in any danger. This was a situation that Tulip needed to handle herself, but with the combination of Jesse and Cassidy: two men that love her and want her for themselves, they fuck everything up royally.

Still, this is basic jealous boyfriend stuff, granted this boyfriend has the power of Genesis on his side. Then Dallas is given a sharp injection of quality with a flashback that finally shows us how Jesse and Tulip’s relationship ended. It’s a little annoying that this is solely from Jesse’s point of view, punctuated as it is with his threat of torturing Viktor, but the flashbacks themselves give Tulip the agency that she has been robbed of in the present. 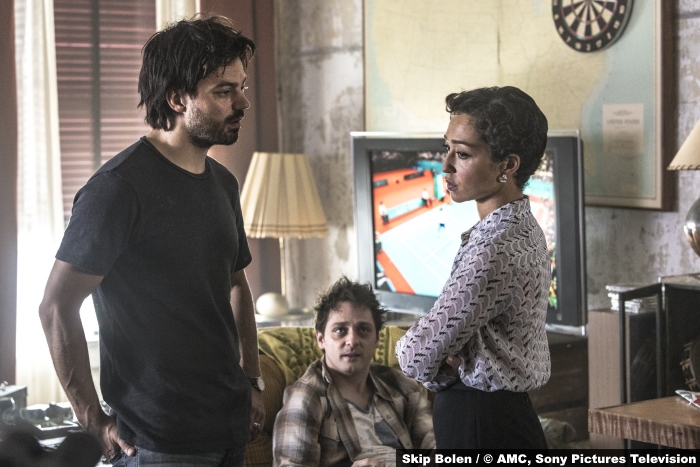 Jesse is dealing with the darkest part of himself: a violent temper that only ever makes things worse. We’ve seen from Preacher’s very first episode that Jesse has a complicated relationship with violence. His fight with Donnie came because he was protecting Donnie’s son, but the real reason it happened was because he was itching to be the hero. He may say that John Wayne is his hero because he plays honourable characters that save people less fortunate than himself, but Jesse is deliberately ignoring another thing Wayne’s most famous characters have in common. They may do good, but they achieve it through violence. Jesse is addicted to violence in the opposite way he’s addicted to alcohol. Violence makes him feel alive, it makes him feel in control even when he is dreadfully out of control. Whereas alcohol is used to tranquillise him against his own failures as a man, and as an ideal.

Even more so than in the source comic, Jesse’s choice of a preacher’s outfit is an anachronism. Like John Wayne with his white hat, or Superman with his blue suit and red cape, Jesse wants to be this symbol of faith, of goodness, of forgiveness. Yet he is a hard drinking, cigarette smoking, violent man, with a moral compass that he constantly lets his flaws get in the way of. Jesse desperately wants to be one of the good guys, but he believes his prayers were answered that lead to his father’s murder, he sent Eugene to hell when Eugene accused him of misusing his powers, and in one of Dallas’ most frightening images, he beats the shit out of Reggie when Tulip tells him that he’s a fraud. He beats up Reggie because it’s easier to do that, and more forgivable in his own mind, than to go after Tulip himself. We’ve seen it all over media, a violent man punching the wall beside his lover’s head to escape their desire to hurt them. Seriously, Preacher isn’t fun this week. 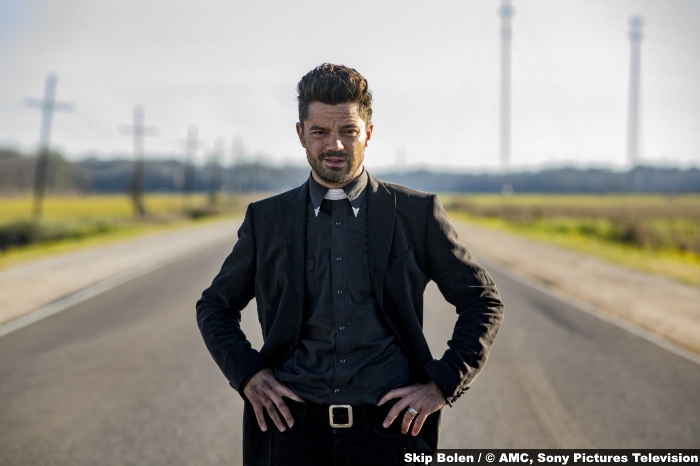 As well as this episode delves into Jesse as a character, it does well with Tulip in the flashbacks, and Cassidy in the present. Through a most soul-crushing montage we see the collapse of Jesse and Tulip as a couple. After losing their baby each cope in a different way: Jesse with a more recognisable form of grief, and Tulip doing the only thing that still makes her feel alive, crime. Their quest to get pregnant again, to recapture what was taken away from them is rough thing to watch, made all the rougher by Tulip’s secret stash of birth control pills. Both are desperately trying to hold on to the idea of until the end of the world”, but the world ended when Carlos betrayed them. The Jesse and Tulip of the present are new versions of themselves, because they had to be in order to survive their grief.

Then there is Cassidy, who for the first time the is week showed his true nature. After Tulip told him that she would leave Jesse if he killed Viktor Cassidy uses this information goad Jesse into doing just that. He’s a wolf in charming Irishman’s clothing which further complicates the trio’s dynamic.

Jesse didn’t kill Viktor, in fact I’m not even sure he touched him after tying him up. He did play with a bloody implement of torture but there wasn’t any new evidence of violence on Viktor’s face or body. Jesse has to face himself, his repeated mistakes, and his complicated love for Tulip. They are both adrenaline junkies addicted to their violent lives so it makes sense that their relationship isn’t exactly stable, but with a nuanced look at its lead character, Preacher managed to pull off a mature piece of storytelling.

8/10 – This is the darkest that Preacher has been so far, and with the Saint closing in, and the Grail still watching the fun is about to return.