Preacher S01E06: Sundowner – Even when everyone talks it out, it still goes to hell

I had a strange realisation when watching the first ten minutes of Sundowner. I realised that, even when Preacher is brilliant, and dull, there’s nothing else like it on television. What other show starts with a diner conversation of cosmic proportions, and ends with a bloody brawl in a hotel room filled to the brim with corpses of three of the characters?

Sundowner continues the upswing in quality from last week, and it does this in quite a simple fashion: character communication. The first five episodes have been keeping certain characters separated to prolong certain plots; Jessie, Cassidy, and Tulip have never shared the same space with them all being aware of it, and these are the leads. While this approach was starting to get tedious Sundowner just throws everyone at each other and damn the consequences. And there are consequences. 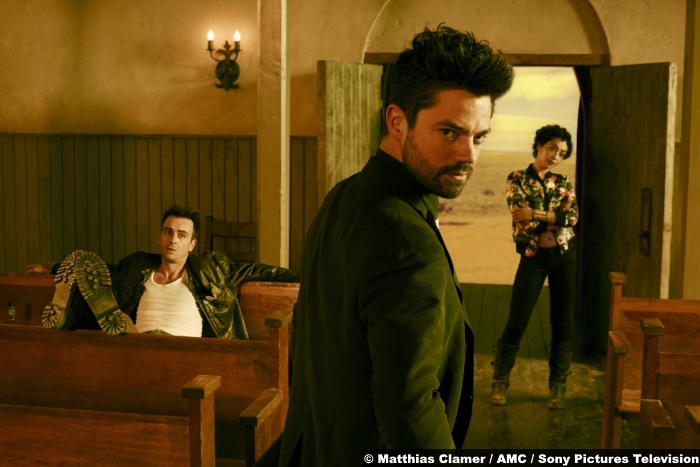 So, after trying to cut him open with a chainsaw, get repeatedly killed or screwed over by Cassidy, and hiding in the bathroom, Fiore and Deblanc finally confront Jessie, who due to Cassidy’s air conditioner potion, still has no clue who they are. After five episodes we finally get answers: the entity in Jessie is named Genesis (shite name, and a shite band according to Cassidy), and it’s the offspring of an angel and a demon who mysteriously fell in love during the on-going battle between heaven and hell. Its existence has been kept a secret, and Deblanc, and Fiore are the creature’s custodians. Got that? You better because there’s a Seraph who looks like a soccer mom coming to kill Jessie and take Fiore and Deblanc back to heaven. Now this is when the already crazy opening becomes, well, a bit more Preacher. Since the pilot, Preacher has had a gift for particularly creative action set pieces, but they’ve been absent for the last few weeks, so this was like a breath of fresh viscera. The close quarter’s choreography adds to the comic touch of the three angels dying and coming back, and just when you think things aren’t crazy enough, in come Cassidy shouting CLONES! It’s a great sequence, directed superbly by Hannibal veteran Guillermo Navarro.

Despite all this insanity, Jessie refuses to give up Genesis, still believing that he is part of God’s greater plan, and wanting to save Annville from itself. If anything, Jessie now seems more determined to fulfil this promise. He even goes as far as installing a PA system to the front of the church, all the easier to hear his message. He becomes a man obsessed, the power inside him corrupting him, showing that dangerous people trying to do good is still dangerous. Which is something Cassidy tries to tell him as they have a brief conversation in there briefs. While this is the latest edition of cautionary Cassidy vs gun-ho Jessie, it does show the easy chemistry that Joseph Gilgun, and Dominic Cooper have with each other. We even get some new information as Cassidy catches Jessie up on everything he’s missed (met a girl, she through me off a building), and Jessie gives another snippet of his past as he tells Cassidy that the tattoo on his back was given to him by  a mean old lady. Preacher is taking its time with its reveals, we still don’t know how the Cowboy fits into things, the bald man that wanted Tulip’s map hasn’t reappeared, and ~Quincannon is missing entirely this week, but all these hints, and clues are masterfully planted. Not a surprise really, since the show-runner is a Breaking Bad veteran.

The consequences of Jessie’s actions concerning Eugene and the Loach’s continue this week as Eugene tries to adapt to a life without the town hating him. Instead of being an outcast, Eugene is treated with kindness from the kids that used to call him murderer. This new situation is heart-breakingly rendered by a passing schoolmate saying hello to him, with his learned reply of “sorry” no longer needed. He even enjoys some bonding with his school mates through some fireworks. It’s Eugene’s reaction to this new-found acceptance that confirms his place as the show’s moral centre. He confronts Jessie and asks him to take the forgiveness back. He thinks he doesn’t deserve it, and that Jessie’s power cheated him out of the redemption that he was trying to earn. As I said last week: it’s not Jessie’s place to change how people feel so drastically, and this is Eugene’s problem. He, rightly points out that people have to be able to choose how they feel, and whether to forgive or not. Jessie has robbed Annville of its free will, becoming a fanatic in awe of his own power. Jessie, predictably doesn’t take this criticism well, he still thinks he’s saving the town, and in a moment of anger tells Eugene, in the voice of Genesis, to go to hell. Eugene disappears, in trying to do good, he has sent the one person who could get through to him to the worst place imaginable.

The show has been adept at questioning Jessie’s actions, his need to be one of the good guys has made him over reach himself, and damned an innocent boy. This plot wasn’t in the comics, so I was as shocked as everyone else at the turn this episode took. Jessie has no come to realise the dangers of Genesis, now he has to fix it. So on behalf of us viewers: get Eugene out of hell you bloody idiot!

9/10 Sundowner is another crazy episode of televisions craziest new show, with shocks, revelations, and