Waterworld, however, struggled to leave an impact after release and only now is starting to find a little love. In April we looked at a movie based on an incredibly popular children’s property and noted how Mighty Morphin Power Rangers: The Movie came out at the peak of the Ranger fad. After that, we considered how Tall Tale was, by design, a dated and old-fashioned property the moment it was released, before shooting for the moon with the delightfully thrilling and uplifting Apollo 13.

Michael Mann’s Heat and Martin Scorsese’s Casino share a lead actor but couldn’t be more different in tone and flair. What they have in common, however, is high quality. High quality is not a phrase many would apply to Tommy Boy, but it’s still a ton of fun after a quarter-century. SE7EN, of course, is not a movie I’d describe as fun. It is, however, a postmodern horror worthy of remembrance. Last month we looked at GoldenEye, a top-three James Bond movie, if you ask me, and the best “Bond reboot” movie of them all.

To end this year’s series, we look at… 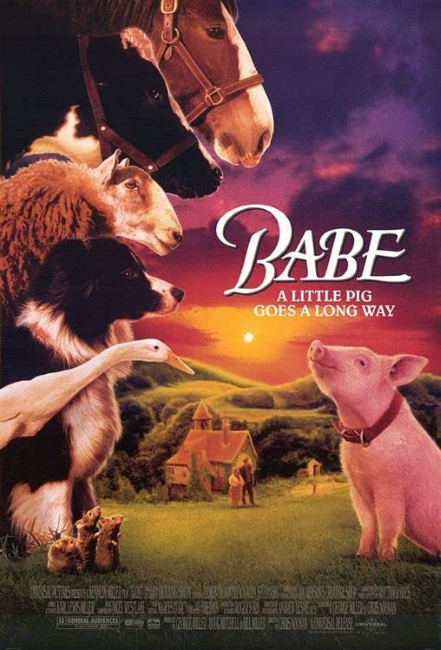 How does one describe Babe?

Probably the easiest way to pitch a movie to someone is with a “meets.” In other words, you describe it with parts of one well-known movie combined with parts from another well-known movie. What is Alien (1978)? It’s Jaws meets Texas Chainsaw Massacre. So what is Babe? 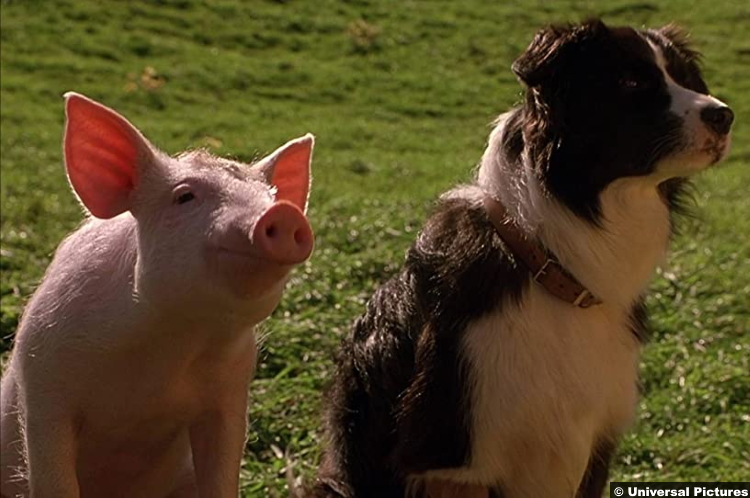 I suppose that requires an explanation. First, the connection to Charlotte’s Web is obvious, and likewise superficial. Both feature talking animals, getting along on a farm, a pig in the center of the story, and the threat of being slaughtered only to be discovered to possess an extraordinary talent. The connection to Winnie the Pooh, however, is not superficial. Winnie the Pooh is, really, about a boy whose childhood is embedded in various animals (stuffed, but that’s irrelevant). It’s a story about the celebration of childhood and I’d argue it’s more about that subject matter than Peter Pan.

Babe is, on the surface, about a pig on a farm, where the animals all talk like people for the benefit of the reader/viewer (this was, originally, a 1983 children’s book), who saves his skin (literally) after displaying an incredible talent as a sheepdog. He’s guided along the way, not by an all-knowing spider named Charlotte, but a loving surrogate mother named Fly (a real sheepdog). Unlike in Charlotte’s Web, Fly does not die in order for the titular character to learn a valuable lesson about life. That’s because this movie isn’t about the pig any more than Charlotte’s Web was about Wilber. Charlotte’s Web was about Charlotte.

Babe is about Farmer Hoggett. 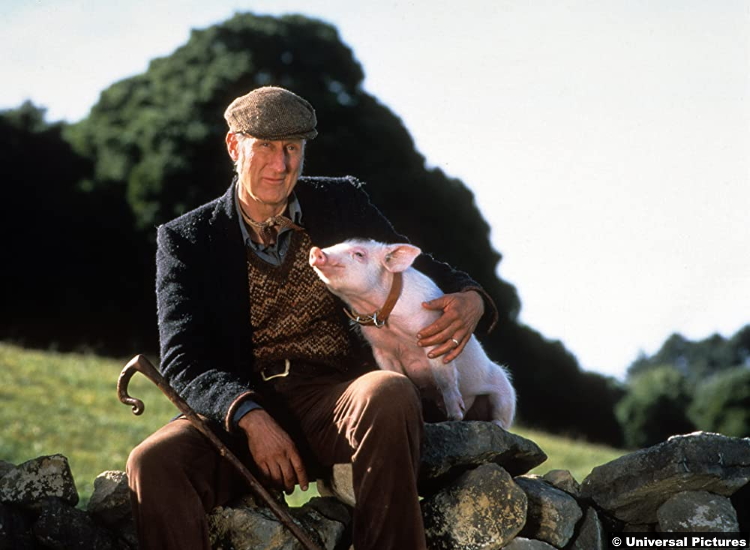 We experience the arc of the movie through his eyes, though much of his development is subtle and unspoken. He starts as an old, tired man, fulfilling a purpose as a farmer without any fanfare or end in sight. He’s not unhappy, mind you, just…getting along. It’s his wife that wins all the awards. It’s his wife that has a big trophy case. He’s not jealous, of course. He’s just a man that has his routine and no reason to deviate from it. Without realizing it, he’s a man no longer living; he’s merely existing.

Then he meets Babe.

Again, this is all very subtly conveyed but, it’s clear to me in watching it, how this happy, naïve, plucky little pig sparks in him a sense of curiosity and experimentation that he had not had reason to explore over his many years as a farmer. There’s a wonderful quote as he starts to train Babe as a sheep pig…

Farmer Hoggett knew that little ideas, that tickled and nagged, and refused to go away, should never be ignored, for in them lie the seeds of destiny. 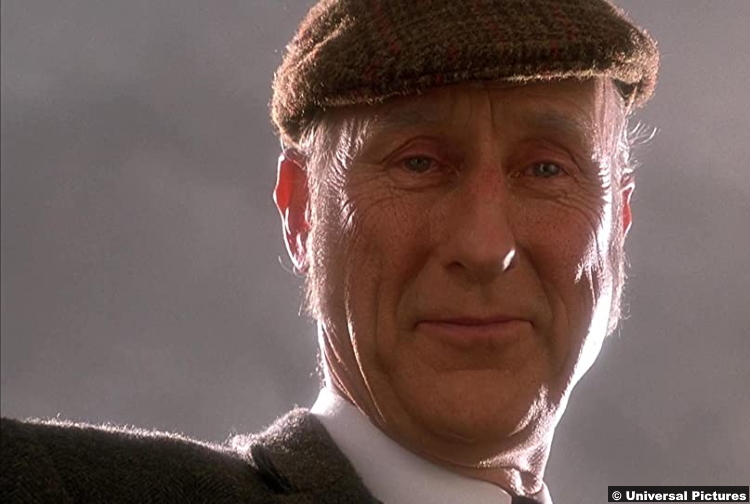 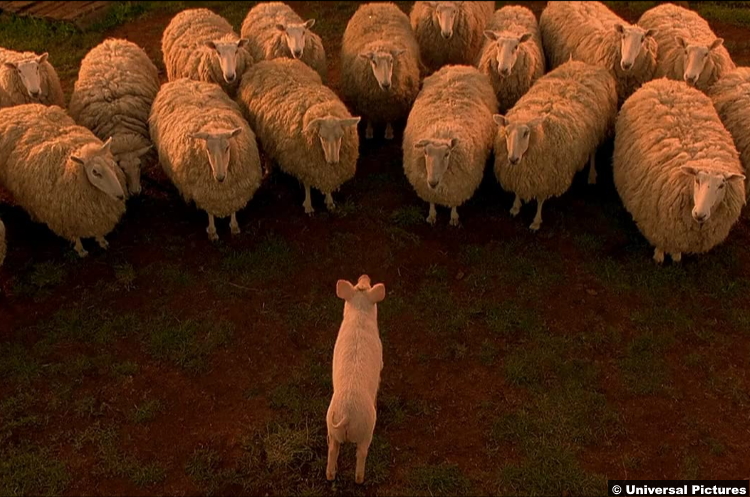 The real turning point moment comes after Babe sleeps outside in the rain and gets sick. He’s nursed back to health and only starts eating again when Hoggett sings him a lullaby. The lullaby turns into an improvisational Irish dance, and though he shows a flash of embarrassment when the rest of the farm animals are caught ogling him, it can’t be denied how young and alive he finally feels thanks to this unexpected attachment to this charming little pig.

Babe is a timeless movie in its style and screenplay, full of memorable characters, moments, and quotes. It has an overriding sweetness to it all but, like all great children’s stories, it’s not afraid to dip occasionally into the dark and mildly frightening. Nor is it afraid to ask questions that some (not me) might argue are too big for the little ones in the target audience. My favorite line of the movie comes as the villainous cat decides to break it to Babe just what pigs are even kept around for. It’s not for sheep-dogging. It’s for bacon. But as the cat starts to explain it, she asks something about “why pigs are here?” To which Babe replies…

Why are any of us here?

How wonderfully existential and yet childlike in its simplicity. If that doesn’t describe Milne’s Pooh Bear, nothing does.

It cuts to the heart of the movie: We are what we choose to be, but we also shouldn’t fight what we can’t help but be. Babe is a pig who wants to be a sheepdog. He becomes a very good sheepdog by being himself, a kind little pig.

Babe might not be the first movie you think of when you look back on the greats from 1995, but it was a childhood favorite of mine and, revisiting it now, I’m pleased to see my opinion of it hasn’t changed. It’s a flawless movie.