This year, Cult of Whatever is looking back on some of the great movies of 1993. It’s been twenty-five years since these films first captivated audiences. Some of them were blockbuster hits, while others needed a few years on home video to find their groove. Whatever their box office intake, these movies are genuine classics and deserve recognition, even years after the fact. In January we looked at the brilliant comedy-slash-philosophical examination that is Groundhog Day. Last month it was Sleepless in Seattle, easily one of the greatest “romantic-comedies” in history.

And speaking of one of the greatest in comedic history… 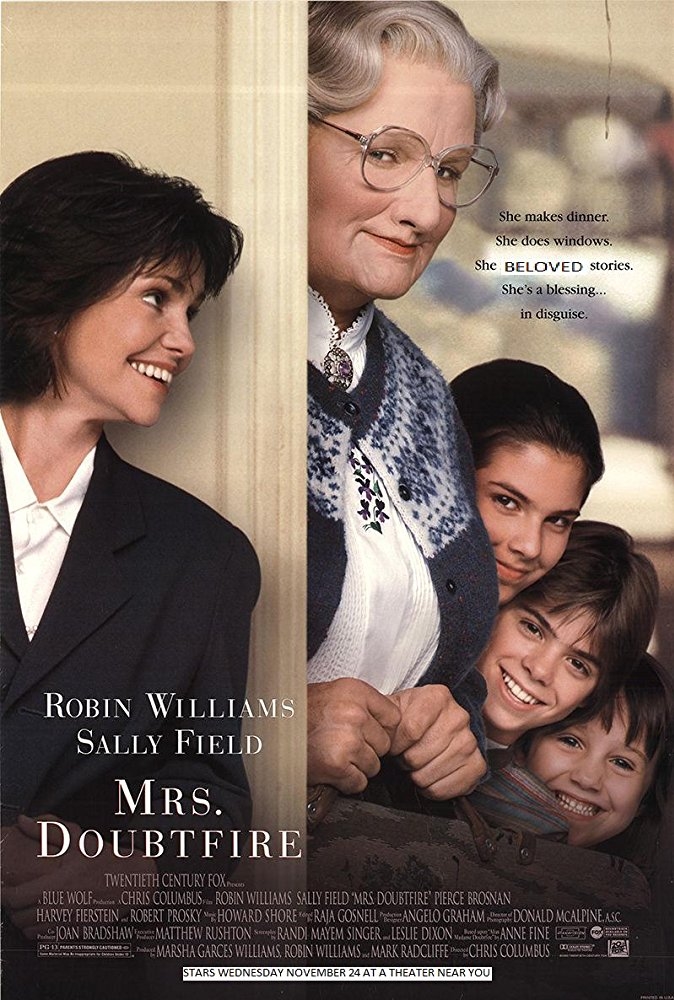 Robin Williams left this world four years ago, but he has left behind a legacy that will continue to entertain for generations. From the forgotten dramatic roles as in Dead Poets Society to the mania of movies like Jumanji or the more nuanced performances like in The Birdcage (no, really), Robin Williams has left us with over fifty movies to enjoy…but I bet there’s one for which he’ll be remembered forever.

Mrs. Doubtfire tells the story of an overgrown manchild who has no sense of adult responsibility, yet somehow got married and had three reasonably well-adjusted kids. When his wife finally reaches her breaking point, she files for divorce and he is forced to buckle down and act like a mature lol just kidding. He dresses in drag, defies a court order, nearly murders James Bond and commits what I’m sure is at least light fraud. 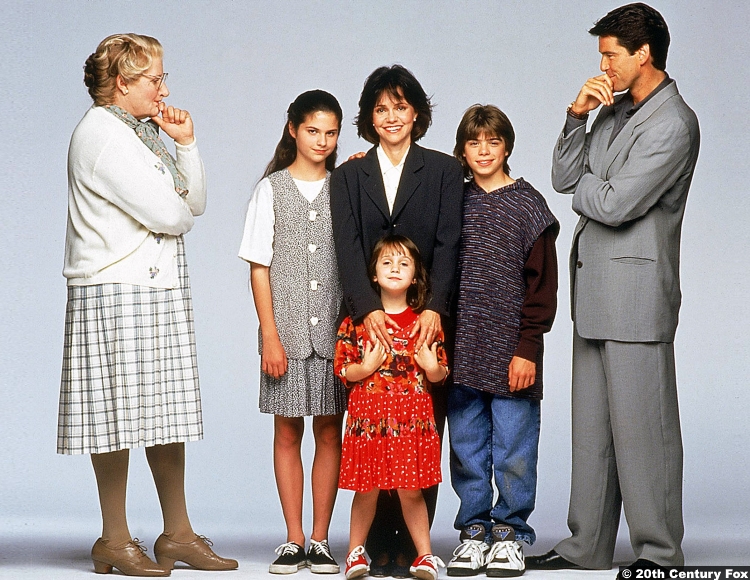 The infamous mile-a-minute improviser, who was so “animated” (pun) in the recording booth for Aladdin, that the animators added moments into the movie to match his rapid-fire impersonations and other spur of the moment ideas, never knew a scene he could not make his own. With Mrs. Doubtfire, director Chris Columbus anticipated William’s mania and set up multiple cameras to record each scene from a variety of angles. Then he turned his actor lose to interpret the screenplay with whatever additional ideas that popped into his head.

According to Columbus, Williams would—like a true professional—film each scene as scripted, but then ask to keep the cameras rolling so he could improvise and see where the winds of comedy might take him. Sometimes a single scene might be done and redone twenty times and even after Columbus was more than sure they had solid gold on their hands, Williams would ask for one more or two more or however many more takes it took until he’d squeezed every last possible laugh out of the moment and out of his system.

The infamous scene where Mrs. Doubtfire’s false teeth plop out into her glass of wine was one such improvised moment, and the reaction of the actors (thanks to the alternate camera set-up) was genuine…

I mean it’s not that remarkable to think someone in that situation might say to themselves “if my false teeth were to slip off, that’d be funny.” The real genius is the instant “carpe dentum; seize the teeth” line that followed. Moments like that are the reason Robin Williams will live forever.

Apparently, there was enough insanity for Columbus to compile a full PG, PG-13, R, and even NC-17 cut of the movie….though you’ll never see those on the bonus features. Supposedly, an associate producer was brought in solely to keep track of every copyrighted reference Williams would make that the studio would need to get permission to use on the off chance it got into the film.

Robin Williams was so enamored with the outfit that he wandered around San Francisco supermarkets to see if anyone would notice him. Whether or not they realized it was a man in drag is hard to say (it is San Francisco), but they at least didn’t spot who it was behind the mask. He even entered an adult bookstore and successfully bought an item or two without arousing suspicion. His own son— seven-year-old Zak—was unable to recognize him, until he started speaking. And even though he was speaking with a faux-English accent, it was apparently one which he’d used at home, because he caught on immediately. 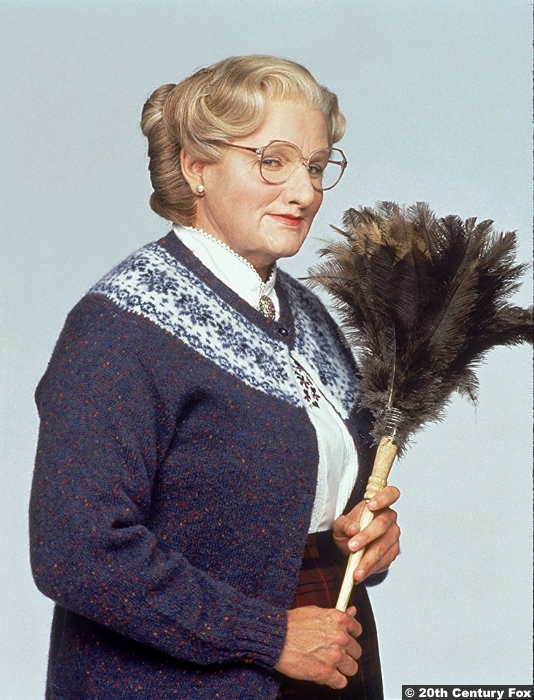 Did you know Mrs. Doubtfire is based on a book? It lacks a lot of the sub-plot that filled out the 1993 film, but the basic story is the same: A struggling actor who doesn’t spend enough time with his kids, loses custody of them, so he dresses as a stuffy English nanny and gets hired to babysit them. When the mom finds out, the parents have a heart to heart, admit mutual fault in the breakdown of their marriage, and agree to let the dad spend more time with his family.

The movie added a critical component, a necessarily “comedic” component, a component tailor-made for its leading star: The “dad” in the story isn’t just a self-absorbed dad, he’s…well, he’s every caricature you have of Robin Williams. Has there ever been a more perfect pairing than this story and that actor? His oft-compared-to comedian Jim Carrey could not have done this role. It requires an ability to at once sympathize with the frustrated mom and then sympathize with the pathetic dad. In fact, Tim Allen was originally offered the starring role and declined. Allen’s a legit comedic talent too, but this movie just feels like it was made for Robin Williams.

Watch the scene where he pleads with the judge not to take his kids’ custody away; it’s heart-wrenching. There’s a sweetness behind the gags and a sadness behind the silly mask that feel all too right with Robin Williams in the lead, who in reality was a naturally sweet-yet-hilarious individual suffering with terrible personal demons.

Now he’s gone and all we have left are memories of him. But that’s okay because the memories are wonderful, much like his kind heart, his delightful generosity, his inimitable comedic style, and his catalogue of great movies; the apex of which is Mrs. Doubtfire, a comedy gem that’s still awesome twenty-five years later.