On paper, there is nothing about SE7EN that would lead one to conclude it was anything more than a paint-by-numbers crime thriller. As a matter of fact, the premise and basic ideas at work are so commonplace it almost reads like a film written by committee, as if a team of producers and note-givers pitched all the little things—cliches all—that they want to be included.

Hold up. What was that last one?

I don’t think it’s a spoiler anymore, since the movie is now twenty-five years old, to mention what the shocking ending to SE7EN entails, but just in case you haven’t seen it, stop now and do so. Fair warning, the movie is grim, gruesome, relentless, macabre, and riddled with despair. Typically a movie like this offers some glimmer of hope, some happyish ending, something for the viewer to walk away holding onto, lest they realize they just devoted two hours of their life to something that seemed intentionally designed to make them feel bad. 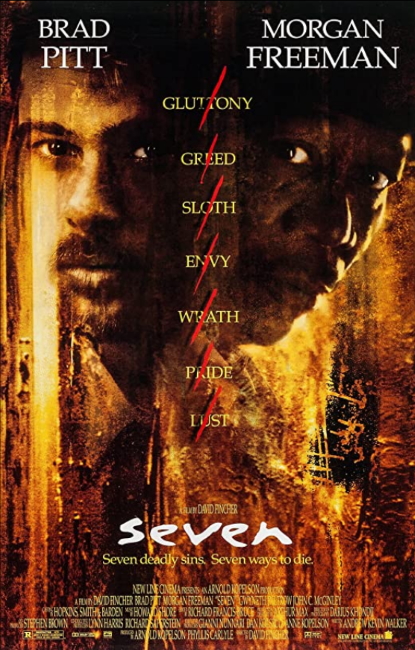 But not SE7EN. This movie is the equivalent of getting punched in the gut and then, before you can even catch your breath again, someone comes along and rips out your heart for good measure. So how does a movie, with a mostly cliche-filled plot, a grim tone, and an unhappy ending linger in the mind as much as this one does? I don’t really have a scientific answer, other than to say sometimes a movie manages to rise above the sum of its parts. There’s something intangible about the movie that seeps into the brain and grabs hold of the psyche. It’s not something you can pinpoint like “direction” (which is stellar), or “acting” (which is great), or “screenplay” (which is good). Usually, when I walk away loving a movie, without being able to pinpoint exactly why, I chalk it up to the editing. When a film succeeds in creating a feeling of tension or mood it’s a credit to the way it’s cut, but even in this case, I think it’s more than that. 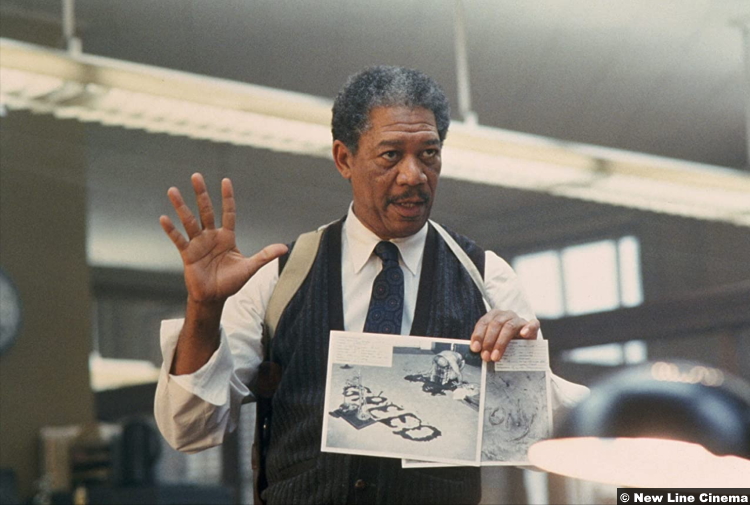 Speaking for myself, I’ve only seen SE7EN maybe five times in twenty-five years. It might even be less than that. And yet, the movie remains high on my list of favorite horror movies, due simply to the visceral impact it left on me during my first viewing.

And it is a horror movie, by the way.

Others might label it a “crime” film or a “thriller.” It has qualities of both, obviously, but it manages to create a feeling of dread and danger one expects of a horror movie, despite how it wraps itself in a “crime-thriller” package. I suppose the only difference between a traditional “thriller” and a traditional “horror” is this: In a thriller, you’re chasing the bad guy; in a horror, the bad guy is chasing you. And if that’s the definition, and if you still want to say it’s just a thriller, how do you square that with the ending of the movie? How do you watch that climactic moment and not realize that the villain was chasing them all along? It might not be a traditional horror…but it sure scared the crap out of me. 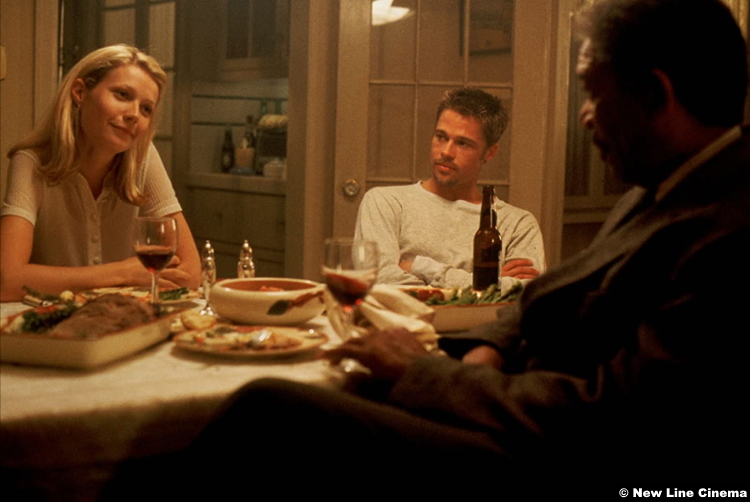 It can’t go unsaid that the only ray of light in the whole movie is Gwyneth Paltrow’s character of Tracy. She’s bright, optimistic, cheerful, seemingly unfazed by the ugliness her husband is contending with and this gives the movie a false tease of hope. Had this been a traditional “thriller” then she and Brad Pitt’s character Mills certainly would have lived happily ever after, little baby and all. It’s the kind of ending that’s almost deserved after so much darkness the movie throws at you. But this is not a traditional thriller. This is a horror and Mills is not hunting the killer; he’s being hunted. As dark and grim as it is, it should have been obvious how things would end, at least in the big picture way. A character as pure as Tracy simply can’t exist in this world; it swallows up characters like that, chews them up and spits them out. 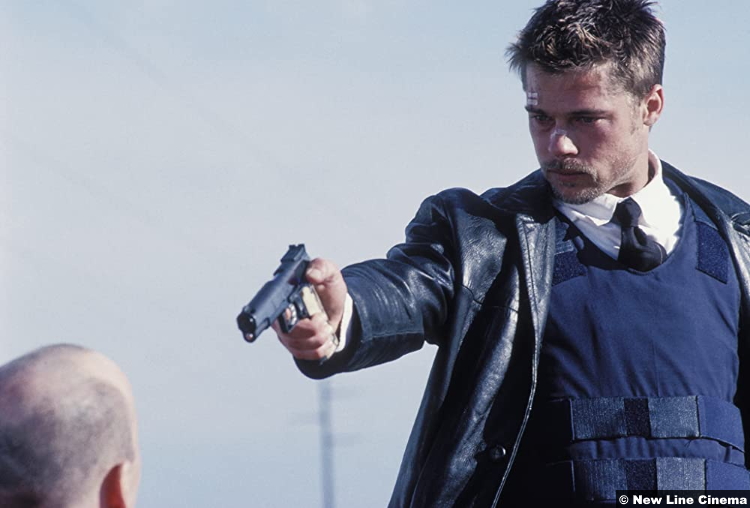 Twenty-five years later, director David Fincher has solidified himself as a genre master, with movies like Zodiac and Gone Girl, as well as the TV show Mindhunter, but of all of them, it is SE7EN that has stayed with me so hauntingly since my first viewing in the mid-90s. Unlike other “twist-ending” films like Usual Suspects—whose ending makes repeated viewings a less-interesting experience—SE7EN’s ending adds to the film and forces the viewer to walk away feeling like a fool for believing there could be a ray of light in the end. In hindsight, anyone naïve enough to think there was a happy ending coming was only setting themselves up for getting their hearts ripped out, victims of the same John Doe that torments the two detectives at the heart of the movie.

It’s only after you see it, and when you watch it again, that you realize you weren’t hunting the killer, the killer was hunting you.

And the killer wins.