Already we’ve looked at Mortal Kombat, a cult classic if ever there was one. It was hardly an award-winner, that’s for sure, nor was it renowned for its score, its acting, or its writing. In contrast, Braveheart dominated at the Oscars and remains a beloved film even today. Waterworld, however, struggled to leave an impact after release and only now is starting to find a little love. In April we looked at a movie based on an incredibly popular children’s property and noted how Mighty Morphin Power Rangers: The Movie came out at the peak of the Ranger fad. After that, we considered how Tall Tale was, by design, a dated and old fashioned property the moment it released.

Speaking of old fashioned, let’s talk about going to the moon. Or, in the case of this movie, not going… 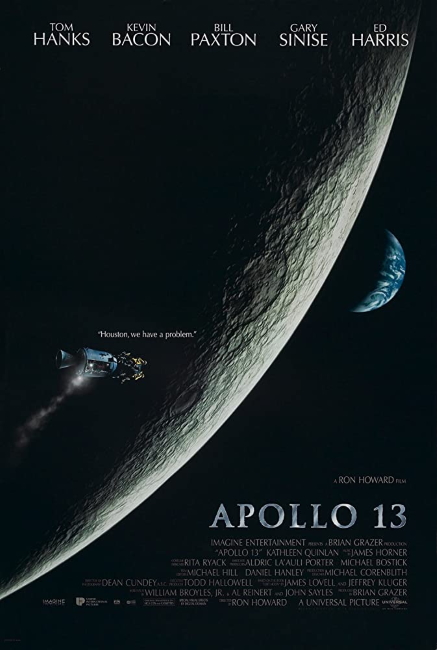 A few weeks ago, a rocket launched a pair of astronauts from Earth to the International Space Station. It’s something that has happened (along with many somethings like it) for the better part of twenty years, but this time it was different. This time the operation was privately funded, and the launch was the first of any kind from US soil in a decade. What should have been routine was, in the middle of a pandemic, something for Americans to collectively enjoy.

Personally, I rather liked seeing all the posts about the launch on my Facebook feed, as opposed to all the other crap I have to wade through on the regular.

Once upon a time, space travel was not so mundane. In fact, I’d argue it’s gotten so mundane today that it’s circled back around to being a novelty; people have been going to coming from space so much it’s not news anymore; it’s not talked about anymore. So when something like the recent launch happens and it finally does get some attention, the nation stops to watch, coming together to share in something positive for a change.

It’s enough to make you wish news companies cared about something other than reporting “bad” news 24-hours a day.

But I digress, let’s talk about Apollo 13, a movie based on a real-life event that occurred right at the cusp of Americans growing bored of space-travel. Imagine that: JFK gave his famous and inspiring “we choose to go to the moon” speech at Rice University in 1962. Just listen…

And yet,  just eight years later, and just one year after we actually did it (and we did actually do it), people looked at going to the moon with as much wonder and awe as taking a trip to Walley World. Congress regularly cut NASA’s budget, and the risk involved in going to space was so great, astronauts found themselves uninsurable. Literally. Life Insurance companies refused to cover them due to the inherent risk of dying in space.

Around that time three astronauts—Jim Lovell, John Swigert, and Fred Haise—buckled into their Command Module, code-named Odyssey, strapped to a Saturn-V rocket, and blasted their way to the moon with little fanfare on Earth. Two days later, a faulty design on the oxygen tanks caused a sudden spike in temperature, resulting in an explosion. The blast blew off a side of the spacecraft, causing precious oxygen to vent into space. The mission to the moon quickly turned into a mission to return, involving a slingshot around the satellite and a dangerous reentry into Earth’s atmosphere.

As tremendous a catastrophe as it was, ironically it solidified the perception of NASA’s mission control as a think-tank of ideas-men with ice water in their veins. It also demonstrated the “grace under fire” resolve of the men in the boat, and basically codified all astronauts, cosmonauts, and other space-faring explores present and future, as the ultimate pioneers. 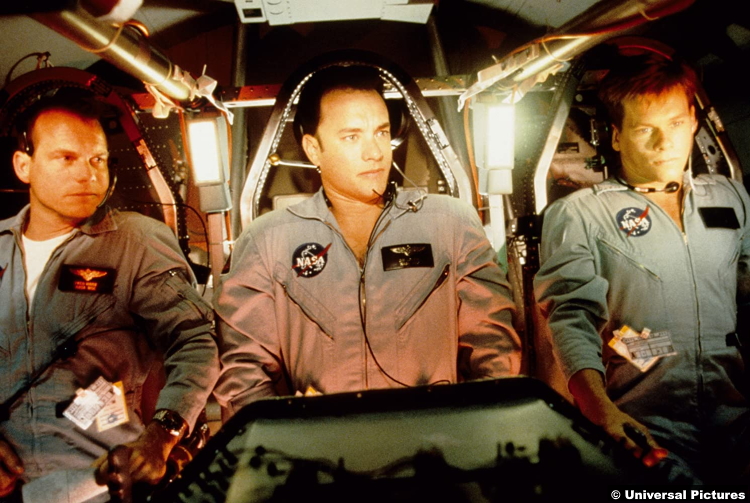 Apollo 13—the movie—is a play by play of the mission and its “successful failure,” as Jim Lovell put it. Director Ron Howard is hardly the flashiest man behind the camera; in fact, I think he’s the most cromulent director working today. None of his movies are bad, but none ever rise beyond just being “very good.” There’s a flatness to them that I can’t quite put my finger on, as if he’s going through the motions while still giving the movie his 110% best effort. His movies are simultaneously dry and yet engaging; it’s a paradox.

That being said, Apollo 13 is his best film, and the closest thing he’s had to a great one.

Howard and his team pulled out all the stops to ensure an authentic experience. A special aircraft carried actors and camera crews up…and down, at supersonic speeds, giving them moments of genuine weightlessness. Unlike the old saying, in Hollywood you absolutely can fake the real thing, you just can’t always do it convincingly. Credit to Howard for doing the thing properly.

In addition, transcripts were poured over and, in many cases, translated directly into the script. Among those include Flight Director Gene Kranz’s declaration for his team to “work the problem” and “not make things worse by guessing.” Later in the movie, Haise asks for Lovell to double-check his math, another moment that happened just as it was recorded in 1970. 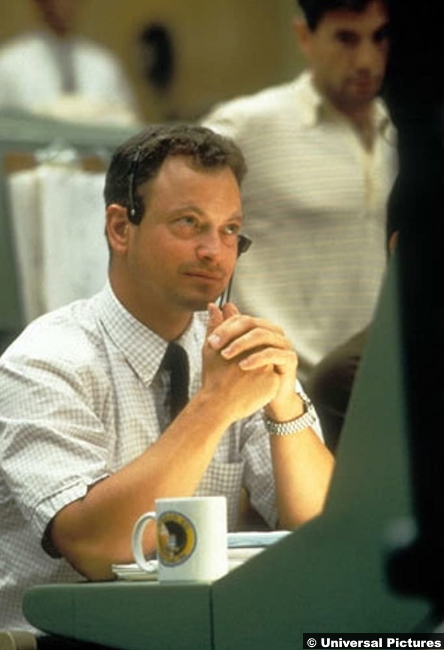 There are, naturally, a handful of “Hollywood storytelling” moments on display to heighten the drama. Probably the most famous of which involves the CO2-to-O2 filter. True to history, such a filter was both needed and manufactured from parts within the spacecraft. Where reality differs from cinema, however, was that the building of the filter was not a sudden innovation, but a long-practiced contingency for just such a scenario, with plans in place dating back to Apollo 8.

Other things, like the recurring omens of doom surrounding the number 13 (not only the number of the mission but the date of the explosion—April 13), or Marilyn Lovell losing her wedding ring, actually did happen, just like the crack in the heatshield, the course corrections, and the agonizingly quiet “blackout” time between reentry and splashdown. If there’s one thing Apollo 13, the movie, illustrates, it’s that in the end, real life is often compelling enough, and only needs a little cinematic push to become something magical.