Michael Mann’s Heat and Martin Scorsese’s Casino share a lead actor but couldn’t be more different in tone and flair. What they have in common, however, is high quality. 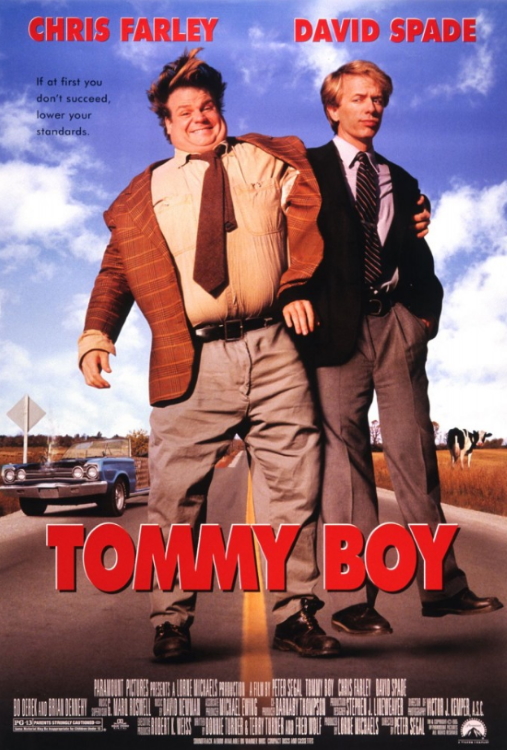 The movie was a Lorne Michaels’ production, which meant it featured SNL stars, a juvenile script, and plenty of nonsense to keep the tone and humor light. Michaels’ movies are hit and miss, with the hits feeling fresh and clever (Three Amigos) and the misses feeling exactly like what they are, SNL sketches stretched to a 90-minute runtime, losing comedic steam with 84 minutes to go (A Night at the Roxbury, Coneheads). Falling somewhere in the middle for most people are the two Farley/Spade vehicles. 1996’s Black Sheep and this, 1995’s Tommy Boy.

For me, both films hold up, but I say that knowing it might just be the nostalgia talking. I was, after all, the prime target audience of pre-teen to teenager. Nevertheless, having rewatched it recently, as a man now in his mid-thirties, I can still appreciate it. It’s not because its story is clever. On the contrary, it’s extremely average. It’s not because its acting is nuanced, either. That’s passable and little else, with one caveat. It’s also not because the direction or cinematography is inventive. The movie’s look is of higher quality than an SNL sketch, but it only barely reaches the levels of made for TV movies.

The movie really has nothing going for it, but for one thing. This guy…

I know that’s not breaking news. The fact is, no one would remember this movie if not for him. No one would have seen it in the first place if not for him. Shoot, the movie itself wouldn’t have even been made if not for him. But it’s not just his ability to take a very pedestrian story and make it enjoyable, or his great physical comedy that carries the picture. It’s the very subtle, but noticeable if you look for it, poignancy he brings to the role of Tommy. It reminded me of John Candy’s performance in Planes, Trains, and Automobiles. It’s certainly not as overtly dramatic as Candy was at times in that movie’s second act, and there’s not nearly as much to work with as in that John Hughes classic film, but it’s similar. It’s the kind of role that hinted at a long career with great comedic performances garnished with surprising dramatic work. 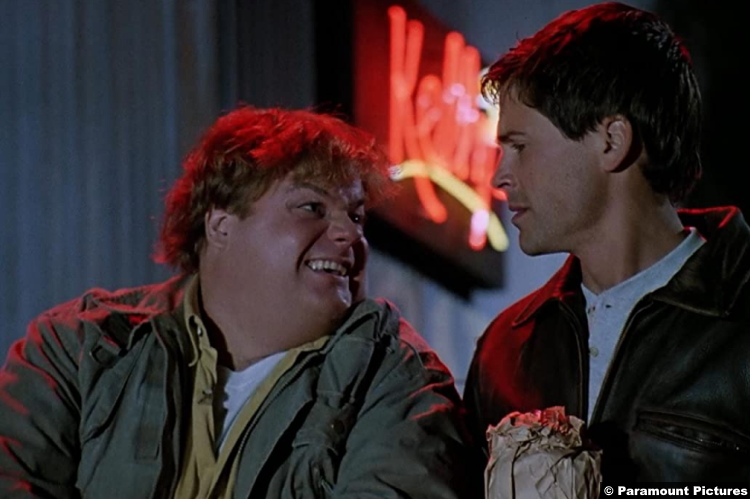 That was not to be, of course.

Farley would go on to star in two more films, the aforementioned Black Sheep, and the criminally underrated Beverly Hills Ninja. By the end of 1997, he would be dead, leaving behind a filmography that should have been ten times longer and filed with more opportunities for the young actor to grow into the well-rounded and versatile performer he was shaping up to be.

Tommy Boy remains the best of the three “Farley vehicles” because the formula was still fresh: Put the actor in the role of a lovable doofus, give him a goal, make him overtly confident and optimistic, while subtly showing his insecurities, stack the odds against him, throw in a wise-cracking supporting character, keep the humor sophomoric, and occasionally allow for some saccharine moments to break up the monotony and let the star stretch his burgeoning acting chops. 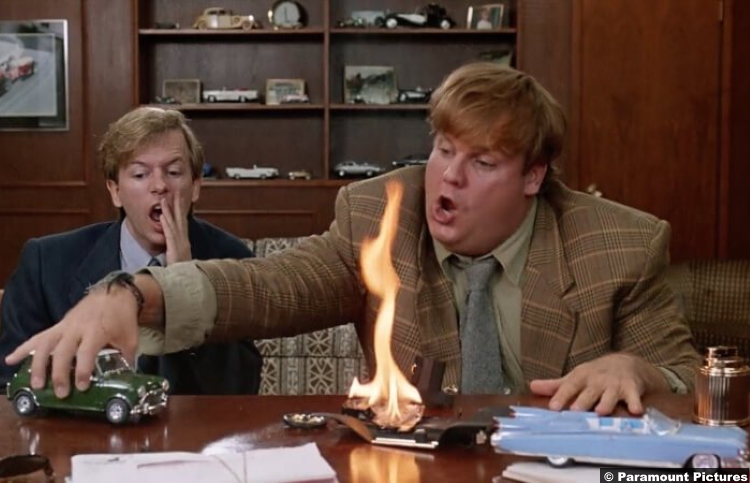 That’s Tommy Boy. It’s not a film made to win any awards, or break the bank at the box office. It’s not a movie anyone would consider “must-see.” What it is, is a light-hearted, goofy, sometimes sweet, and a great—what should have been—star-making role for the man with the big heart at the heart of the film.