When Luke Perry died earlier this year, Riverdale was still shooting the third season. They could’ve shoehorned his death into the season, but instead of something sloppy, showrunner Roberto Aguirre-Sacasa wanted to give Perry the tribute he deserved. So here we are, “In Memoriam.”

This is a strange review to write because nothing much actually happens in the episode. It starts off like usual–the kids are preparing for the 4th of July parade and Cheryl is upset about it. (If you’ll recall, Jason died on the 4th of July 3 years ago. In the interim, the town suspended the parade.) Cheryl, who’s keeping Jason’s body in her home, vows to keep it from happening. It’s all the typical teenage drama we’ve come to expect: the kids are at Pop’s, Cheryl says something sassy, and they mostly ignore it in lieu of tasty diner food. Then Archie gets a phone call. 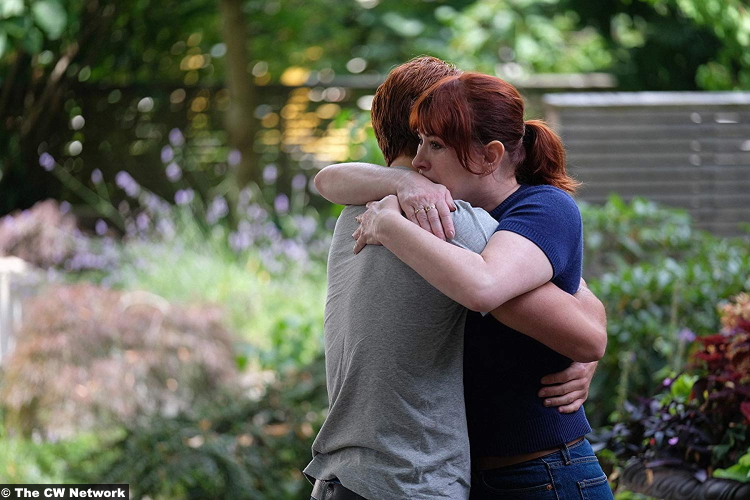 It is FP who has to deliver the news to Archie and his mom. Fred has been killed in a hit and run. He was in that situation through the most Fred-like circumstances you can imagine. He had stopped to help another motorist who was stranded. In the process of changing her tire, he was hit.

Fred was actually out of town when the accident occurred, so Archie and Mary have to wait for his body to be returned. Even in dreams, Archie can’t handle that, and wakes up resolved to go bring his daddy home himself. He also wants to see where Fred died. The rest of the core four agree to go with him, of course.

And it’s brutal when they get to the funeral home. Archie wants to know for sure that it’s his dad, but in the end, he just can’t go look. So Betty and Veronica do it for him, because friends help you carry your burdens. Then they go to see the roadway where Fred passed. They’re surprised by the woman whom Fred had helped. Shannen Doherty, who was, of course, Perry’s Beverly Hills, 90210 castmate, plays the woman. Perry had wanted her to appear on the show for a long time. And while it was lovely to see her, how awful that it was this way. 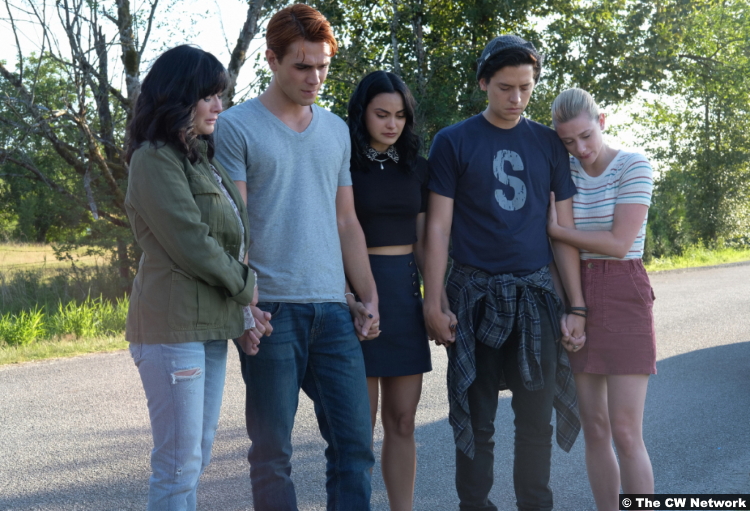 Doherty’s character tells Archie that his dad, who stopped for her when no one else would, talked about him. And that his final act was pushing her to safety. Is it possible to dehydrate from tears?

The hit-and-run driver turns himself in, but it’s really a moot point. A furious Archie visits him–he’s made bail–and finds out he’s covering for his dumb weiner kid. You know, the exact kind of thing that Fred would have done.

With that, there’s nothing else to do but take Fred Andrews home. FP meets them at the city limits to escort them back. As they drive through town, the streets are lined with people holding signs in remembrance of Fred. And then it’s time for the real remembrance of Fred, his funeral. I would say there’s not a dry eye in the house, but I haven’t stopped crying. 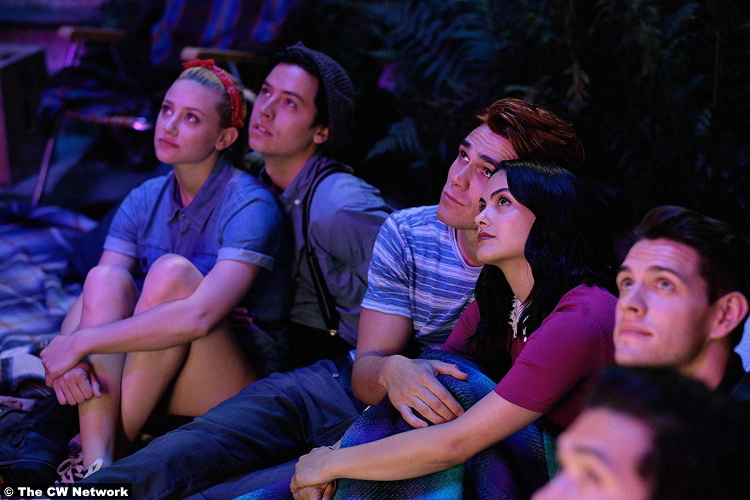 It is a lovely tribute to Fred, though, as is the private fireworks show Cheryl provides. The Blossom family had sponsored Riverdale’s annual fireworks display for Independence Day, but in recent years…well, you know what they’ve been through. This is just one small thing that Cheryl can do for the town, for the people who loved Fred, and for Fred, who always treated her with kindness. Because, you know, that’s the way he approached everyone.

And it’s a lovely tribute to Luke Perry. There’s a scene in the end where Archie goes into the garage and remembers the good times with his father. It’s almost shocking to see him again. It reminded me of the first episode of this summer’s BH90210. Earlier in the episode, Gabrielle Carteris says she can’t believe they’re all together again and Jason Priestley responds, “I wish that were true.” Later, Tori Spelling and Jennie Garth catch an episode of the original 90210. Perry is onscreen (with Priestley) and like Jennie Garth, you can’t help but gasp when you see him. He was so cool. And kind. And here. And I’m sure I’ve said it before, but I’ll say it again: He will be missed. He already is.

[It feels weird and wrong to assign a grade to this, so I’m not gonna.]