Legion S03E04: Chapter 23 – Of course there would be consequences

One of the biggest advantages of genre storytelling is how flexible it can be. Since the move away from episodic seasons of shows like The X Files, where regardless of what happened, Mulder and Scully reset to their respective roles of believer and skeptic, genre TV has been able to combine the use of narrative experimentation with more serialised plotting. While The X Files and Star Trek: The Next Generation had their share of fantastic experimental episodes, it wasn’t until Buffy the Vampire Slayer debut that those experiments became a way to drive the characters forward without the need to reset. Take the three most popular episodes of Buffy and you’ll see what I mean.

Hush, the predominantly silent season four episode had the lasting impact of Willow and Tara meeting for the first time. The Body, the season five episode that may be the most devastating look at mortality ever, was based around the death of a major character, one that was the main symbol of the normal life Buffy could never have. Finally, the musical episode, Once More with Feeling, where Buffy revealed to her friends that they may have ripped her out of heaven. Devastating. All experiments, all having a lasting impact on the show’s universe. Which brings me to Chapter 23. Legion is a show in which every episode feels like a narrative experiment, and this episode might be the most impactful yet.

While I’m a little disappointed that we didn’t get a continuation of the Charles and Gabrielle story, Chapter 23 barely gave me time to care too much. I’m still not sure exactly how David was able to go back in time with Switch because he couldn’t enter the hallway of time. I guess Cary made a science thing. Another thing that Buffy has taught us is that if you mess with the rules of the universe you always get consequences. Season three of Legion cleverly set up the rules of time travel as we followed Switch through the first episode. It wasn’t something to be used carelessly. Sure, Switch was able to use her power to prevent Syd killing David, the further back she goes the more it puts a strain on herself: as we see through her rapidly growing dentist bill, and the threat of the beasts roaming in the dark of the hallway of time. 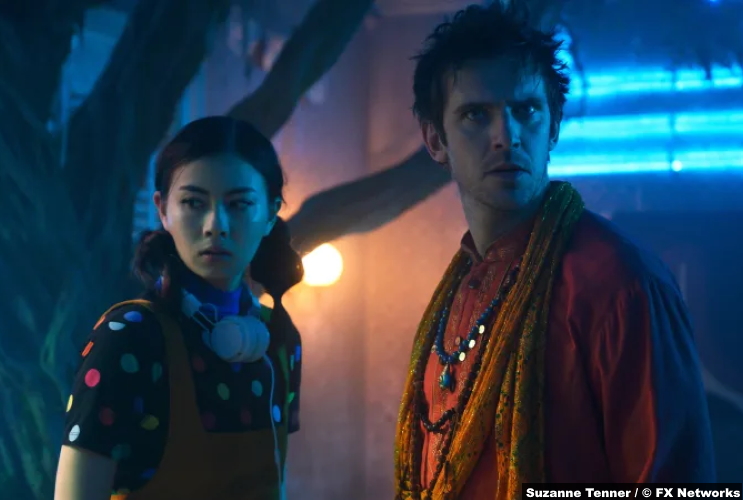 Through David and Switch’s trip into David’s parent’s past, they have unleashed these demons on the world; Syd even says that this may be what David does to bring about the apocalypse. There is a president for monsters unleashed through time travel: The Flash had the Time Wraith (formerly known as Zoom), Doctor Who had the Reapers all the way back in season one, and now Legion has the demons. Legion’s villains, including David himself, always have a psychological component to them. The Monk’s plague put its victims in a place of peace, the insanity chicken (I’ll never get tired of typing that) drove its victims mad, but the time demons may be the worst of the show’s secondary antagonists.

As is typical of Legion, the design of the creatures is horrifying, with their glowing blue eyes, toothy smiles, and the way they move as if flickering through frames. What may be creepier than their appearance is the modus operandi. Switch says that they eat time, and that sounds bad enough, but the manner in which they do so gives the episode its real horror. To try and defeat David, the demons send him back to the concentration camps, specifically the cell beside his mother. After David tries to explain to Gabrielle how she can save him from the Shadow King in the future, she replies that he is crazy just like her. We know that this is probably true, but David still cannot accept this about himself even saying that all of the people who hate him don’t exist, and proclaiming himself to the time demons as God. They catch Syd by giving her what she wants: a conversation with her teenage self where that come to understand what they have to be to survive. It’s through the intimacy of a hug, which neither believe is entirely without danger, that the demon gets Syd. 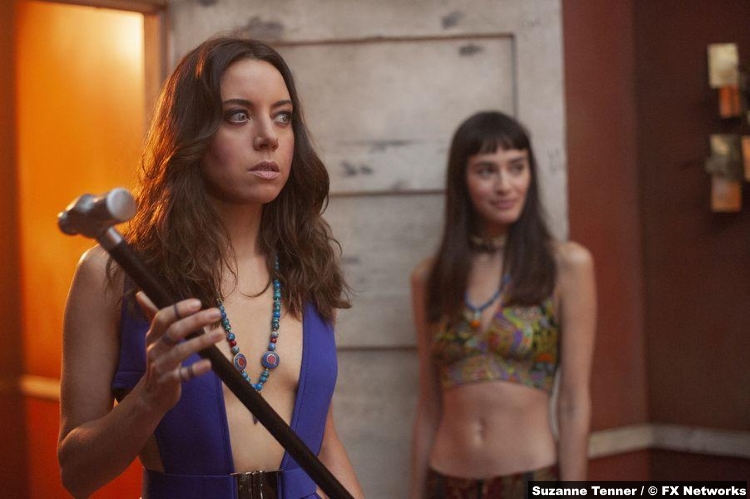 As bad as both of those situations are, Lenny gets the rawest deal. Beginning the episode by planning life for herself, her girlfriend, and unborn child, the time demons give her that life in a handful of situations. Like flicking through a family photo album, Lenny sees her daughter grow and die, wiped out forever after David defeats the time demons. It’s brutal, but Lenny, who has been extremely in sync with David up to this point, refuses David’s offer to wipe her memory and take the pain away. The pain is all she has left. That’s the trick of the demons, they give each character a version of what they want, but with a terrible price. David can finally see and talk to his mother, but she calls him crazy. Syd can counsel her younger self, but it’s the physical intimacy that traps her. For Lenny, it’s the life of her daughter reduced to mere moments. What a bunch of dicks!

9/10 – Chapter 23 is a wild ride of an episode. It’s full of style and cheek (that clip of The Shield had me thinking I’d accidentally changed the channel) and mind-numbing horror. And David caused all of it, though Switch should have told him about the monsters.