Chapter Ten is Legion’s version of a table-setting episode, which obviously includes a fortune-telling stall in the middle of nowhere, more Jon Hamm asides about madness, and David having a serious conversation about the ethics of time-travelling secrets to his girlfriend, who also happens to be a cat for half of this conversation. That’s just how Legion rolls, trippy imagery, simple in-camera effects that are specifically designed to disorientate us, and my own realization that a simple flip of the camera is enough to make me queasy as I found out at the beginning of this episode. It would be easy to accuse Legion of style over substance, and many will do just that for as long as it’s on, but as Chapter Ten reminds those who are paying attention (I’m not being patronizing, seriously, it’s hard to get everything from this show in just one sitting) that the style is there to inform the substance. 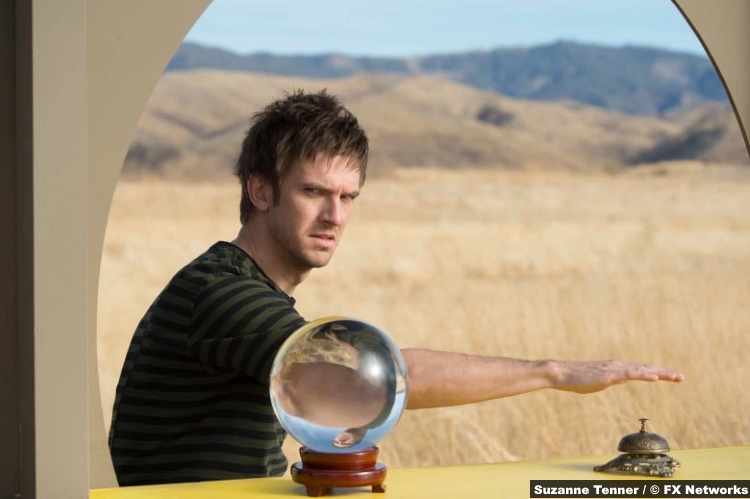 Chapter Ten is about as straightforward as this show gets. Much like the penultimate episode in season one, David’s lack of understanding is used to catch both himself and us up on what is going on with one new wrinkle: we know that David is lying to everyone about what he remembers from his year in the orb. We know that he saw Syd from the future, and with an arm missing which I somehow missed last week (seriously, I prescribe multiple watches) and that she told him to help the Shadow King hide his body. Now we and David know why.

Before we find out though we get the brilliantly rendered version of David having his mind melted in order to project himself forward in time. It’s sequences like this that show how effectively simple Legion’s visual techniques are. Through distorting each frame of film when David is submerged in the giant brain machine (or the brain bath, patent pending) to David manifesting in the future with our image and his reality glitching is inspired. Once there future Syd, who can talk this time, tells David that to stop the coming plague he needs to help the Shadow King. Apparently, because David killed Faruq in future Syd’s timeline the plague wiped everyone out. It’s unclear, mainly because Syd doesn’t say, how the Shadow King can help stop the plague but we, and David have to take Syd’s word that he can. 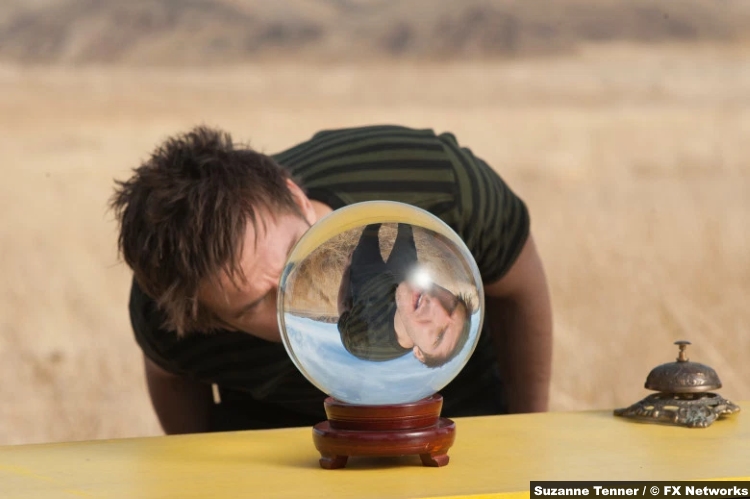 This is where things get a little tricky. In season one of Legion, the action mostly took place inside David’s head. Even when he wasn’t sure what was real or not, the show never got vague enough for the viewer to not have a good guess. Now that David has expelled the Shadow King he has most of his mental faculties back. What makes me suspicious about future Syd is that David continually gives us the main reason, in his mind, for both his recovery, and why he can lie to everyone else, and that’s Syd. It was his relationship with Syd that helped him not only defeat the Shadow King but realize that he was there in the first place. It’s because it’s Syd that told him to, even if it’s the future version, that he is willing to help the Shadow King now. Here is the question: is that really Syd?

Think about it, she is the one person that could get David to do anything, the one person that he trusts above all others. I’m not sure why this could be the case, perhaps it’s the Shadow King himself, who knows? After all, it’s only the second episode, but I’m worried that things aren’t exactly as mad as they seem. What if they were madder?

Speaking of the Shadow King, Chapter Ten shows David meet his long-time parasite in the flesh, well, David’s in the flesh at least. This is a huge moment for David, with Farouk showing his true face, he finally sees what he’s been fighting without all the masks. Each of them is in a difficult position here: Arch enemies made to work together is nothing new for superhero stories, but both David and Farouk would probably love nothing more than to destroy each other, though Farouk could possibly be pulling for David to join him as a final affront to the still absent Prof X. as the beginning of Chapter Ten shows us and David, The Shadow King is not to be trusted. After promising David that he wouldn’t kill anyone, The Shadow King, adding insult to injury by being both Oliver and Lenny while he did it, tricked David into leaving Division 3 defenseless so he could look for the Monk.

In the past I’ve made it very clear how much I love Aubrey Plaza’s performance: Lenny literally haunts my nightmares. Yet with Navid Negahban playing the true Shadow King, and Oliver replacing David as his vessel, I did wonder if there was much use for the Lenny persona at this point. Lenny herself seems to share my feelings, as she frequently asks to be put into another body and I’ve again. This is interesting as it confirms that The Shadow King stole more than just David’s memory of Lenny, he stole her soul, for lack of a better word. Still, Lenny feels at a loose end, and while it would be kinder to the character to let her go, I found myself shouting at the Shadow King to refuse her. I know, I’m selfish, and Aubrey Plaza might only work as a one season wonder, but I have to know what else she and Hawley have up their sleeves for Lenny.

8/10 – A little more plot-heavy than the premiere, but Chapter Ten lays the groundwork for the season with infinite style.