Much of Chapter 15’s success depends on how much you bought into Jon Hamm’s insanity chickens. I’ve not given them much thought so far, apart from praising the Jon Hamm of it all, mainly because they have been in the background of episodes that had a lot more important things going on. In fact, I had completely forgotten that Ptonomy was infected, though this says more about how little I’ve warmed to the character than my attention span. As a season-long story, these carriers of insanity have been deployed as a thematic delivery system for whatever Hamm is talking about that week. It’s only now, in Chapter 15, that they begin to have a genuine effect on the story and the suggested end of this plot was much better and memorable than what led up to it.

The only real consequence of the insanity chickens is that Ptonomy’s body is now dead and his mind has been hooked up to the mainframe at the center of Division 3. Out of all of the supporting cast, Ptonomy, barring that one episode where we got a peek inside his mind, has felt more functional than the rest. Jeremie Harris has been fine in the role but, apart from his powers allowing us into David’s mind, Ptonomy has been only vaguely characterized as the voice of dissent, and the guy with the rifle. Even with this little to go on, it still makes sense that Ptonomy would be the first to become infected, as he also was with the Monk’s disease. The delusion that Ptonomy was used to pass on was brilliant in its simplicity: what if the good guys were really the bad guys?

This is an idea that season two of Legion has been playing around with since the beginning. In the comics, David has been both hero and villain depending on the story and writer, so there is always that built-in possibility of a villainous future in the adaptation of this character. Farouk has had a great time this season trying to break down David’s resolve on this very subject. He has suggested many times that the hero/villain idea is a product of empty moralizations as he keeps trying to develop David into the god that he would have made him if David hadn’t cast him out. There is an arrogance to Farouk that makes him almost charming, a deep sense of his own importance that all good villains should possess. Also, like every good villain, Farouk is the shadow version of David: a symbol of David’s walk down the wrong path that is also a symbol of the untapped potential of his powers. Farouk has been trying to unleash this side of David by appealing to his most destructive tendencies. 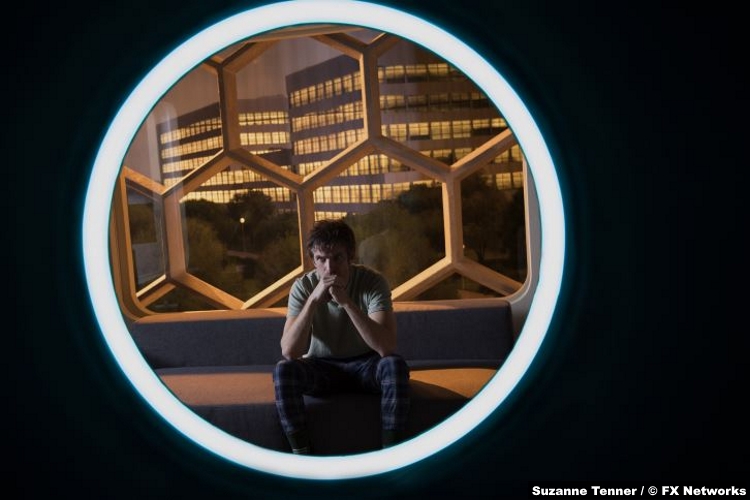 Farouk’s murder of Amy to bring Lenny back (Lenny’s first death could also be attributed to David as his disregard of Syd’s boundaries led to the situation that cost Lenny her life) is given a much more problematic slant when David finally confronts him. Farouk cites David’s feelings of resentment towards Amy for putting him in Clockworks, resentments that led to thoughts of harm towards his sister. David can’t deny these thoughts as Farouk was a passenger when he had them. Again, this is a deceptively simple manipulation that counts on David already feeling overwhelming guilt for his part in Amy’s death, and David resolves to kill Farouk instead of helping future Syd avert a global disaster. Then the penny drops. Through one of Chapter 15’s many stunning sequences Farouk confronts future Syd to find out just what the hell she is up to. It is revealed that the world ending event isn’t the Monk’s plague or a parting shot from the dying Shadow King: it’s caused by David. As simple as that, the hero becomes the villain of the whole season. 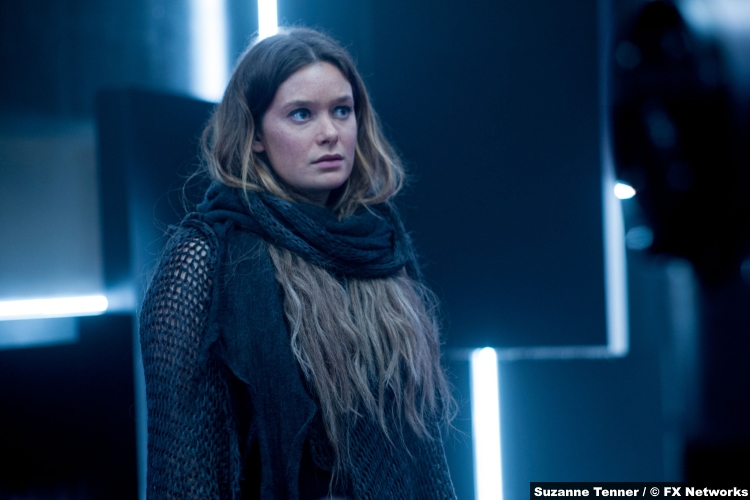 This is the heart of the moral panic that Jon Hamm was talking about. Ptonomy Clark, Kerry, and present Syd are all infected by insanity causing the mass delusion that Fukuyama is really their enemy. The delusion suggests that behind that basket is the real monster, and the script and direction prime both the show’s characters and the audience for a surprising reveal about who Fukuyama really is. It turns out he is no one, at least no one shocking, and David returns from breaking things off with future Syd in time to save everyone bar Ptonomy. David’s method here speaks volumes for his state of mind. At first, he doesn’t want to kill the monster, he gives it a chance to leave because he has bigger things to worry about. On a side note, this scene is similar to many instances in Doctor Who when the Doctor gives the enemy the same choice, but the off-beat way it is handled is pure Legion. The monster refuses, or maybe it doesn’t understand the deal being offered, and David kills it. The important thing to take away from this scene is that, despite his villainous future, and despite the potential for evil that lives inside him (that he can’t blame solely on Farouk) David still has it within him to be merciful. The kid’s table suits him.

8/10 – An understandable dip from last week’s brilliance, Chapter 15 gets back to moving season two’s plot forward. Not everything lands, sorry Ptonomy, but even Legion’s lesser episodes have the capacity to thrill at the moment.