After all this time, after 18 episodes, we arrive at the ending only to find that you can’t go home again. And you can’t retcon life.

We begin, though, with secrets and terror. First, the secrets. Gordon Cole confesses that he’s been keeping one from his colleagues. It involves Major Briggs and Cooper and the plan they hatched some 25 years ago. Cole says, “And I don’t know at all if this plan is unfolding properly,” which, besides being scary, is a very meta thing to have the creator say. 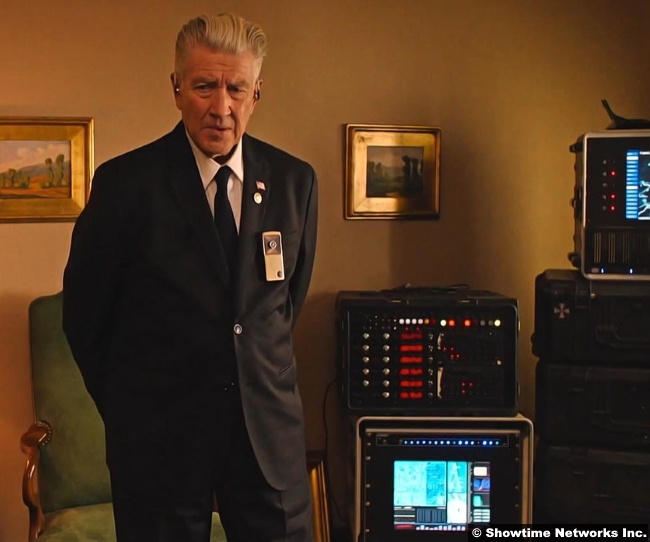 And speaking of scary, then comes the terror. Mr. C arrives at the Twin Peaks Sheriff’s Station before Cooper. You hope that they’ll feel it, that they’ll know it’s not him, but even Diane didn’t know until he kissed her.

And they don’t know. Andy and Lucy greet him like he’s their long-lost friend and then they introduce him to the new Sheriff Truman, who invites Mr. C into his office. When Mr. C refuses coffee, you hope again that they’ll know, but they just don’t.

No one gets it until Cooper himself calls the station and Lucy transfers the call to Sheriff Truman. He keeps his cool, but Mr. C knows what rests in men’s hearts and he and Sheriff Truman pull their guns on each other. For a second, you think Sheriff Truman is a goner, because your heart has been filled with dread since Mr. C arrived, but you weren’t counting on Lucy. She shoots Mr. C before Sheriff Truman can get a shot off, as Mr. C’s shot rustles Sheriff Truman’s hat.

Andy has gone looking for Hawk. It takes him down to the cells, where Chad, having concealed a key in his boot, is out and armed. Freddie uses his magic glove to blow open his cell door and knock out Chad, who sucked to the very end. Andy takes Freddie, James, and Naido upstairs with him, where he finds the body of Mr. C and his wife, who announces that she understands how cell phones work now.

Then Hawk and the real Cooper arrive and there’s hardly time to do anything, but watch the Woodsmen fuss over Mr. C’s body, which Cooper has told everyone not to touch. A ball of energy containing BOB rises from his body and attacks Cooper, but he knows about Freddie and this is Freddie’s destiny. He punches the ball repeatedly until it finally breaks into pieces.

As Bradley Mitchum says that that was “an experience for the grandkids,” I felt the terror and dread lift a little. Then Cooper’s image was superimposed over everything and I felt it rushing back. Was this all a dream? Have we been the dreamers all along?

Everything does go dreamy after that, including the fact that Naido’s face burns out and is replaced with Diane’s. 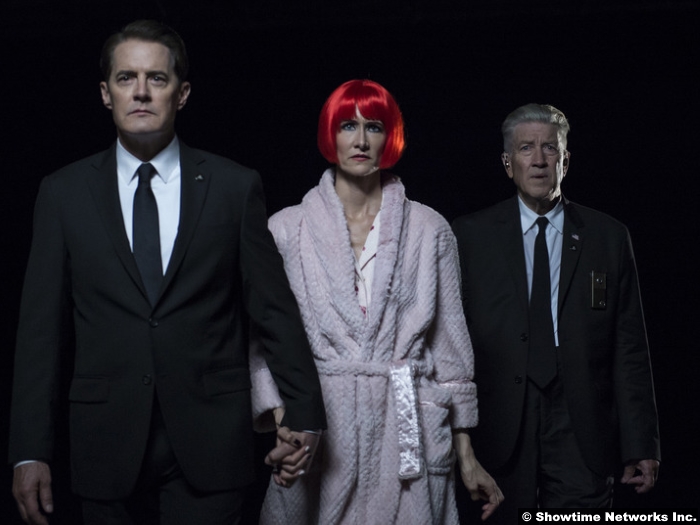 Using his old room key, Cooper, Diane, and Cole go to a room down by the boiler underneath the Great Northern. Cooper basically does a “You stay. I go. No following” to them both and walks through the door. In doing so, he walks back into the past, into Fire Walk with Me and into the original series. He does this with the help of Phillip Jeffries, still a tin machine.

But then the dread returns in earnest, because as Cooper is escaping with Laura, pulling her back into the world, taking her home, she disappears.

After that, the dream turns into a nightmare. Cooper wanders the world with Diane and after a sexual encounter that the word “uncomfortable” seems too small to encompass, she leaves him to wander alone. As he does, he sees Judy’s Diner in Odessa, TX. We’ve learned from the first part, part 17, that Judy was a code name for a bad spirit. Cooper goes there to find a good one. The waitress he’s seeking hasn’t been to work in a few days, so he visits her home. And once again, he finds Laura.

In this world, her name is Carrie and she claims to know nothing of a girl named Laura, who had a father named Leland. However, when Cooper mentions her mother Sarah, Carrie’s world shifts. She agrees to go back with him–to return–to a town called Twin Peaks.

But when they arrive at the Palmer house, Sarah isn’t there. A woman named Mrs. Tremond, who says they bought the house from a Mrs. Chalfont–both references to the earlier lives of Twin Peaks–lives there and has never heard of the Palmers. 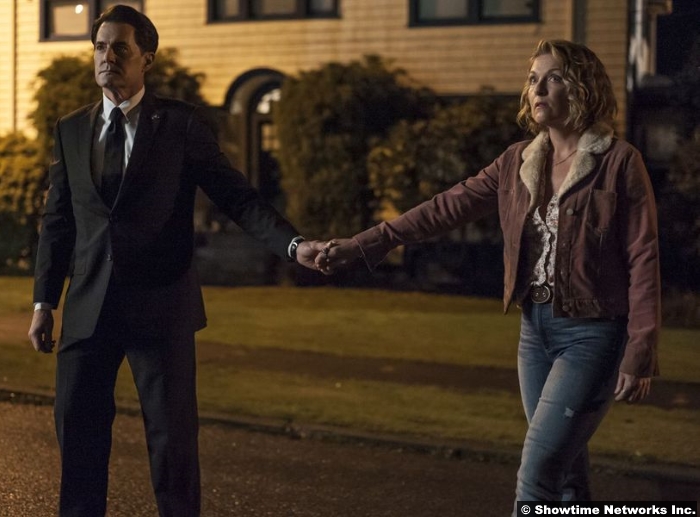 It seems like the end of the road, like the end of the story. But there is a faint calling from the home–Sarah’s voice screaming for “Laura.” Carrie-as-Laura screams in return. But she might as well still be screaming into the void, because we don’t know even know what year we’re in. And we still don’t know what Laura whispered into Cooper’s ear in the Red Room, which is the image with which we’re left.

Earlier in the season, we heard about Cole’s Monica Bellucci dream in which she says, “We are like the dreamer who dreams and then lives in the dream.” She’s making a reference to the Upanishads, to a story that goes on to say, “We create our world, and then enter into that world. We live in the world that we have created. When our hearts are pure, then we create the beautiful, enlightened life we have wished for.” You can think of that literally–David Lynch created this world and then entered into it as Gordon Cole–or you can think of it in the context of the show. We live in the world that we have created. Cooper keeps trying to find Laura and to save Laura, but in doing so, he creates new worlds. He hasn’t yet figured out how to wire it all together so it fires at the right time. Maybe his heart isn’t pure enough yet. There’s some evidence for that, as after he crossed through with Diane, he didn’t seem like himself. There was a splash of Mr. C, a coldness the Cooper we’ve known never had.

Maybe he can get there. There are, after all, still new worlds to create and to explore. There is still Audrey trapped somewhere. There are still other questions that haven’t been asnwered. I don’t know if we’ll get to go back into this world. You can’t go home again and you can’t rewrite the past. Major Briggs already said that he feared that love might not be enough. You might lose someone you love. But you can still find ones that you love. You can live in the world you’ve created.

9/10 – It took me longer than usual to write this because I had to roll it all around in my head a while. I held back on a deep dive analysis of what I think it all meant, because I don’t like to color others’ impressions and I don’t think any one person has the definitive answer, save David Lynch and Mark Frost. This was a challenging, sometimes frustrating season, but it had many more high points than lows and I’m just so delighted that we got to return to Twin Peaks. Even if all the characters couldn’t.