Twin Peaks moves to an hour earlier this week to accommodate the return of Ray Donovan. That might have come as a surprise to you, because it sure was to me.

And speaking of surprises, this episode is full of them, starting with the conga line the Mitchums, their pink ladies, and Dougie make into the insurance building. The Mitchums are feeling very generous after their pie night with Dougie. They pile gifts on Mr. Bushnell (cigars, diamond cufflinks, and a new convertible BMW), as well as Dougie. The Joneses get a new BMW of their own, as well as the world’s most Vegas gym set for Sonny Jim. But that’s not all the surprises! 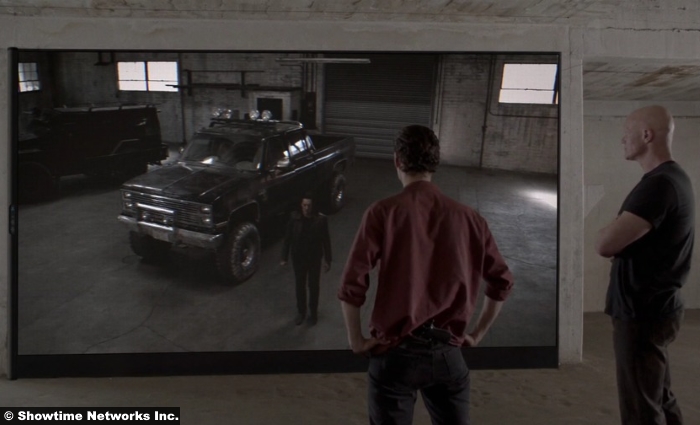 Ray, who was last seen unsuccessfully trying to kill EvilCoop gets a big one when Mr. C shows up again. Ray’s been hanging out in a criminal warehouse [they store criminals and criminal accessories] with a wall-size screen for their surveillance system, which is how they catch Mr. C’s approach. The warehouse is run by Renzo (Derek Mears) and for some reason, control of the warehouse runs on an Over the Top-style arm-wrestling contest. Why anyone would look at Mr. C and think I should challenge him is beyond me but here we are. Predictably, Mr. C not only wins the bout, but punches in Renzo’s face. Note: I did not say that he punched him in the face. He punched his face in. Then he shoots Ray and sends him to the Red Room after finding out who hired Ray to kill or try to, at least. It was someone going by the name Phillip Jeffries. It probably won’t happen, because I believe he was unfortunately too ill at the time of filming, but if David Bowie shows up in this season…well, I’ll probably cry. Anyway, one of the criminals in the warehouse who watches all of this unfold on the CCTV is none other than young Richard Horne.

Back in Vegas, the Fusco brothers get the prints back on Dougie and I suppose I was wishing too much to have them take this seriously, because when they see that AFIS says he’s missing from a federal pen in SD and is a missing FBI agent, they think it’s a mistake.

And speaking of mistakes, this criminal nonsense that Dougie’s coworker Anthony is involved in is getting to him, especially now that he’s disappointed Duncan Todd and his partners, two dirty cops (including one played by John Savage), think he’s cracking up. You know, because he is. He tries to poison Dougie’s coffee while Dougie is distracted by pie, but he crumbles when Dougie returns and touches his back.  I don’t know what he thinks Dougie was doing, but in actuality, Dougie was distracted by the snow pile of dandruff on the back of Tony’s coat. Anyway, Tony’s not cut out for the thug life.

In fact, he ends up confessing to Mr. Mullins and Dougie that he’s been scamming the company for the benefit of Duncan Todd and he’ll even testify to that fact. He’s less sanguine about testifying about the two dirty cops and he’s probably going to die and I dunno, I’ll try to scrape up a tear over it. 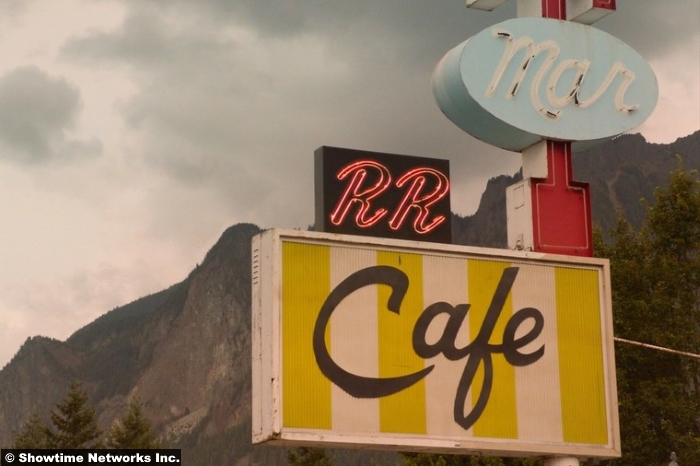 Also weighing heavy on my heart: In Twin Peaks, Steven, Becky’s ne’er-do-well husband hasn’t been home for two days. Hope he didn’t fall into a well. Shelley’s suggested cure for her daughter’s distress is pie. That might be laughable and insulting if pie didn’t make the world go ’round.

Anyway, the Double R is now being franchised as Norma’s Double R, which is very cool, and they’re doing well, according to Walter from corporate (Grant Goodeve). One of the locations that isn’t doing well is the original and the reason is that they aren’t charging enough for pie. See, the original uses high-quality ingredients—local,organic, etc.—and I have a feeling the pies at the other diners, which people don’t think are as good, are using the cheapest materials possible. Also, they want her to change the name of the flagship diner, the one we’re currently in, to Norma’s Double R, too. Nah, we’re good.

Actually, no I’m not. I’m irritated on multiple levels in this scene because a) I am clutching-my-pearls offended by the suggestion that Norma make her pies a little more mediocre AND b) Walter and Norma seem to have something going on, which means Big Ed sits forlornly in a booth with the other sad man of Twin Peaks, Bobby Briggs. At least Nadine and her silently-running drapes get to have a nice moment with Dr. Jacoby. 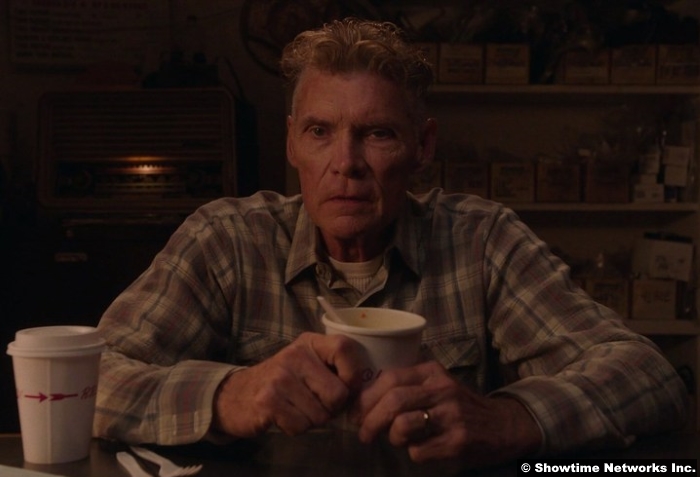 Those nice moments seem to be few and far between in Twin Peaks, though. Or maybe I’m just thinking that because we spent more time with Sarah Palmer, who’s mainlining vodka and watching an old boxing match on a loop. Before I forget–time loops. When Sad Bobby is in the Double R, he mentions that they found his dad’s stuff “today,” so things are definitely not happening in a linear fashion.

As for the things happening with Audrey…Lord, I don’t know. Is she still in a coma? Is this some kind of Shutter Island-esque immersion therapy? Is she dead? I don’t know, man, and it’s bummin’ me out. I just want to give her a hug and sway to no music.

Luckily for all us sad folks, the show came through with the wild James Hurley appearance at the Roadhouse, with him sangin’ “Just You and I.” This is ultimate trolling and I’m gon’ have to talk to some pie about this.

7/10 – The time loops and dimensional fuzziness–see also: Big Ed’s reflection at the end was not moving like him–are fun and classic Twin Peaks, but overall, this episode was a little whelming. Maybe the sadness is getting to me. What’d y’all think? Post your comments and pie recs below.