I got so excited when I started writing this that I accidentally hit “submit” seconds after writing the title, uploading a blank page. This episode, man. I laughed, I cried*–it was a roller coaster.

The ride begins with a trio of boys playing ball. It’s such a wholesome image that I thought for a second, Oh, yeah. People live here. Then I immediately thought of the beginning of The X-Files episode “Home” and the many other TV shows and movies about the rot beneath perfect suburban lawns. You know, like this one. Sure enough, this cornfed scene comes to a sudden halt when the boys find a very battered Miriam crawling out of the woods.

We don’t learn the end of that–if she survives, if she tells anyone about Richard killing that boy, etc.–because we’ve got to swoop over to Becky’s trailer, where she’s finding out that that fuckboy she’s married to is stepping out on her. His side piece is Gersten Hayward, Donna’s little sister, who was played back then and is played now by Alicia Witt, a fact that went right past me until the credits. 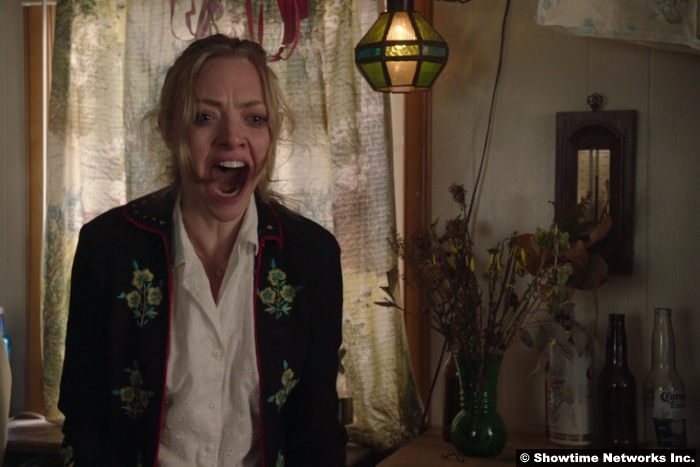 Becky doesn’t take it well. She calls her mom for help and Shelly races over to lend her the car. Becky is really not taking it well, as she roars out of the trailer park gun in hand and with her mom briefly on the hood. It is terrifying, because with David Lynch, you never know what to expect.

Thankfully, Shelly is deposited on a lawn with just a scratch on her knee. Carl gets her a ride back to the Double R and on the way, he radios the Sheriff’s Department to be patched through to Bobby. This is when we find out that her name is Shelly Briggs now and we will later find out, after Becky has shot up Gersten’s door, that Bobby is Becky’s father. However, if you were hoping for a reunion from the original series’s secret lovers, your hopes are as dashed as Bobby’s. Red shows up outside the diner and Shelly bounds off to him like a schoolgirl. At least she has the decency to move their making out from right in front of the door. She is still making the same bad mistakes she made as a girl and it looks like her girl has inherited those bad instincts.

It’s heartbreaking to see the pain on Bobby’s face, but then the gunshots ring out and it’s terrifying again. It turns out to be just a kid in a car who found his dad’s gun. He’s clad in the same camo jacket out fit as his dad and mimics his posture–another kid repeating their parents’ mistakes. As Bobby’s trying to get hold of this situation, the woman in the car behind them is just laying on her horn. When Bobby tries to get her to knock it off, she freaks out, screaming that they have miles to go to get home and they have to go. Is that a metaphor for audience members anxious to get back to way it used to be? If so, I’m not sure what the zombie kid in her passenger seat symbolizes, but I laughed so hard, I almost collapsed a lung.

So much of this episode takes place in Twin Peaks that I almost forget there were other places. Sheriff Truman and Hawk are headed for one of those other places, although it’s not far from town. Hawk patiently explains to the sheriff what the symbols on his map mean. There’s black corn and a fire, for instance. Margaret calls to relay a message from the log. There’s fire where they’re going. Well, fire walk with me. That buggy symbol that I thought was an owl is also on Hawk’s map, by the way. The sheriff asks about it, but Hawk tells him, “You don’t ever want to know about that.” Well, now you have to tell me. 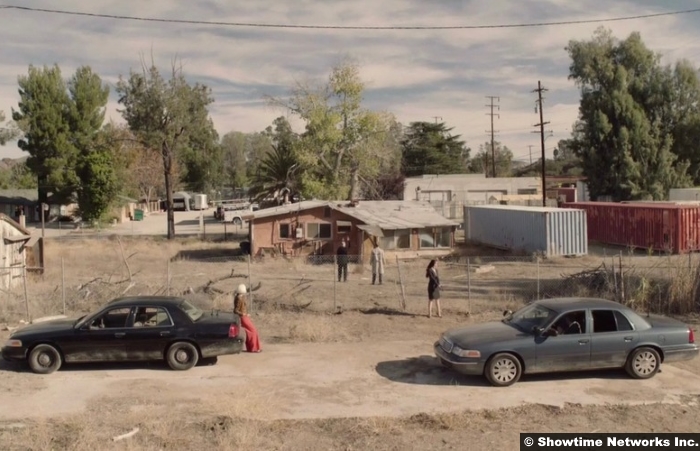 Back in old Dakota where a genocide sleeps, it’s time for Hastings to take the authorities to the place where he and Ruth breached the veil. There is indeed something there, a great swirling in the sky that almost sucks up Gordon, before Alfred pulls him back. While they’re checking things out and finding Ruth’s body (with coordinates written on her arm) and Diane is smoking, something (a woodsman?) pops the top of Hastings’s head clean off. Gordon takes a look at him and announces, “He’s dead,” which made me laugh all over again.

There is still something very hinky about Diane, which the show is going to minor pains to illustrate. Witness the scene in the police department, when they have her sitting on a stool, literally on a different level than everyone else. And speaking of different levels, Dougie. His boss packs him off to meet with the Mitchums, who are planning on killing him, but Dougie can’t go until he wanders off toward a mirage of the Red Room over some business. He exits holding a box. They’ve found that the fire at the Mitchums’ casino was an accident, not arson, so Dougie’s also packing a $30 million check for them. When they get to the desert, Rodney Mitchum is all ready to wipe Dougie out, but Bradley is still troubled by the dream he had about this exact scenario. In it, Dougie was carrying a box and Bradley says if what was in the box in his dream is in the box now, they can’t kill him. What was in the box in his dream? Gwyneth Paltrow’s he–I mean, a cherry pie. In the box in real life: 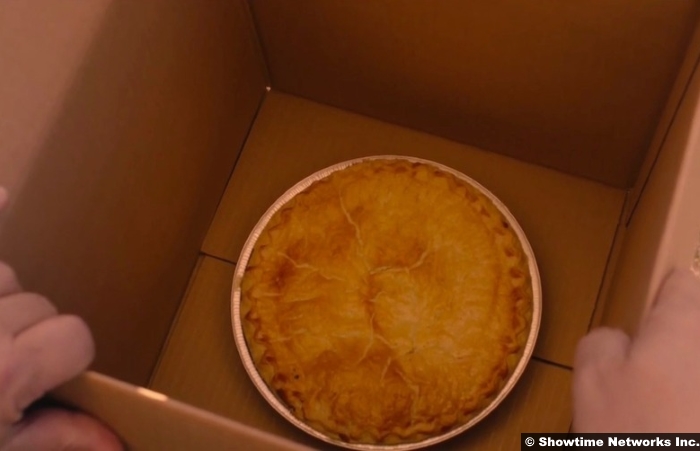 They still pat him down, though, and that’s when they discovered the multi-million dollar check made out to them. The next thing you know, they’re all at Santino’s laughing it up. The disheveled woman from the casino, who won big when Mr. Jackpots rolled through, is there too. She’s dressed to the nines and ever so grateful that he saved her life. Everyone’s so happy and that includes me, smiling through my tear when Dougie repeats that it is “damn good” cherry pie.

Earlier in Twin Peaks, Maggie (Jodie Thelen) , one of the dispatcher’s office answered everyone’s call with the same message, “Someone’s on the way.” We are all returning. I can’t wait to get there, but I’m not going to yell about it, lest a zombie child rise up in my truck.

8/10 – We are past the halfway point and getting closer to the end. Some people may be running out of patience, but we’re getting there. We’ll get there.

*I will never admit to this and you didn’t read it.