As we get closer to the end of this season, things are becoming electrifying (pun intended). The meaning behind the use of electricity on Twin Peaks has been heavily debated throughout the years. Sometimes it’s been used in a foreboding way, to signal that something bad’s about to happen. (“Things can happen!”) However, one use of electricity in this week’s episode might have been the start of something good.

It happens as ol’ Dougie Jones is eating a slice of cake and watching Sunset Boulevard. A character says, “Get Gordon Cole” and Dougie comes alive. He looks more aware and focused than we’ve seen him all season. Then the electricity hums. That’s enough to get Dougie crawling across the floor to an outlet in which he sticks his fork. Is that jolt enough to restore Agent Cooper? I sure hope so. 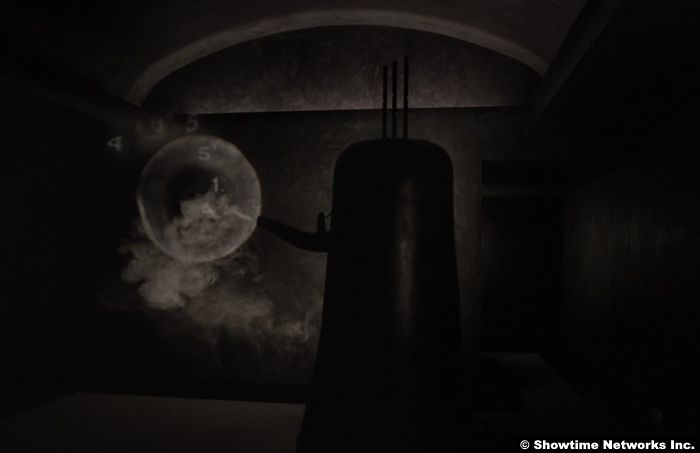 I hope so, because Mr. C seems to be crawling toward progress of his own. He visits the woodsmen’s convenience store, where I’m pretty sure I’ve stopped on a road trip before, then up another staircase into a motel parking lot. I’ve know I’ve stayed there before on a road trip. He passes through a lot of spookiness, which includes a figure that looks like the “Mother” that killed those two in the New York apartment and who has Sarah Palmer’s face at one point. Finally there is Phillip Jeffries, although he’s a coffeepot (?) now.  He’s a tin machine! Sadly it seems that we will not see or hear the real Bowie this season except in flashback, as Nathan Frizzell did the voice for this episode. Jeffries’s conversation with Mr. C is loopy and doesn’t come to much. Jeffries mentions “Judy,” whomever that is [“Judy” Garland Briggs?]. He won’t say, possibly because he doesn’t believe it’s the real Cooper to whom he is speaking. (“Who do you think that is there?”)

Outside, after all this, Mr. C is accosted by Richard, who believes him to be Cooper, because HIS MOM kept a picture of Agent Cooper. So now they’ve teamed up. Mr. C also texts “Las Vegas?” to someone who might be Diane or might be his hired killer couple Hutch and Chantal (Tim Roth and Jennifer Jason Leigh). I’m sure we’ll find out.

In Twin Peaks, the electricity brings more good than bad. Dr. Amp, formerly known as Dr. Jacoby, has really inspired Nadine to shovel herself out of the shit in her life. She’s so motivated, in fact, that she walks clear across town with her golden shovel to tell Ed that she’s been selfish for years and that he’s now free to be with the woman he loves.

So he trots straight to the Double R, Otis Redding’s “I’ve Been Loving You Too Long” soundtracking his arrival, to tell Norma. She hears him, but Walter is there and she has to speak to him. Her message for Walter is that she’s selling him her interest in the franchise, giving up any involvement with it but keeping the Double R. Then she comes to Ed. 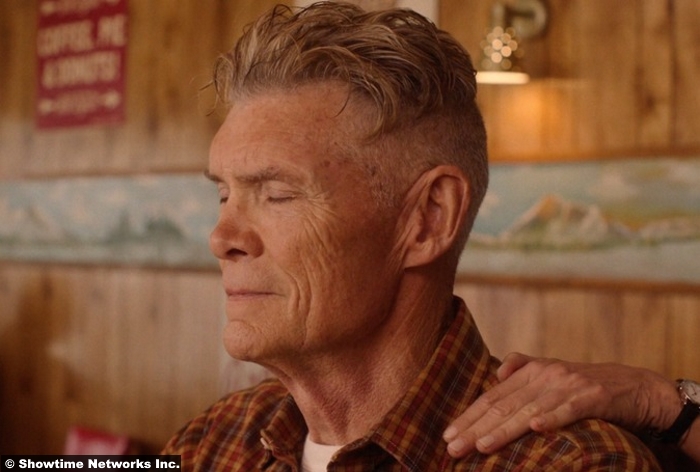 It is a moment fans have been waiting for almost as long as Ed and it is handled tenderly and with the respect that it deserves. It is a beautiful moment and I’m glad we got to see it. They’re going to get married and a little bit more will be right with the world.

Another moment we got to see that I was less happy to watch was the final conversation between Hawk and Margaret Lanterman. There are some things she doesn’t want to discuss on the phone, but she says the most important thing: she’s dying. She tells him that “death is just a change, not an end,” and then she’s gone forever, just like Catherine Coulson. An earlier episode was dedicated to the memory of Coulson, but tonight’s is in memory of Margaret.

It seems as if that wasn’t the only death tonight, as Steven apparently killed himself. I haven’t enjoyed his storyline that much, so for me, the best part of that scene was Mark Frost’s cameo in which he was walking a Boston terrier through the woods. It is interested, though, that Gersten stares up at the sky like Becky did in a scene with him. 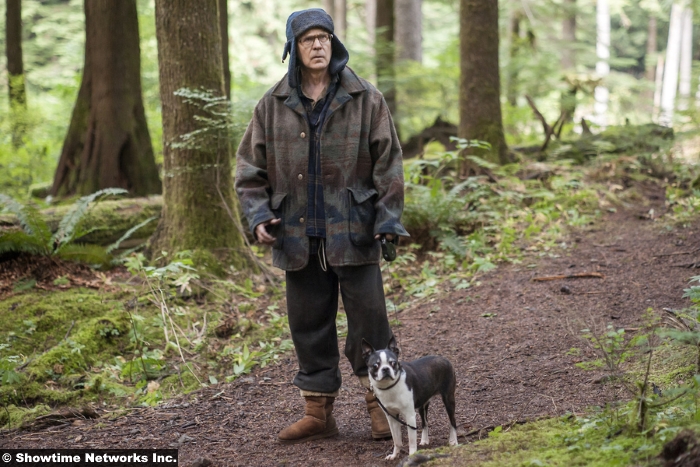 Audrey is still trapped in her nightmare with Charlie. I feel as frustrated as she does. She can’t past the threshold, which might be more fodder for the “Audrey’s in a coma” theory.

James and his garden glove-wearing coworker Freddie make the scene at the Roadhouse, where they get into a scuffle because of James’s involvement with the married Renee (Jessica Szohr). As Freddie mentioned last week, he wears the glove because the Fireman told him to. It has immense power, as he barely taps Mr. Renee and his friend with it and almost sends them into another dimension. Freddie and James get put into jail cells, joining Naido, Chad, and the mysterious drunk who might be the Billy everyone is seeking.

Back at the Roadhouse, Charlyne Yi plays Ruby, who is kicked out of her booth and in an echo of Dougie’s scene, crawls across the floor. Then she screams.

Earlier at the Roadhouse, they’d played an old favorite, ZZ Top’s “Sharp Dressed Man.” Is this another clue? Every girl’s crazy ’bout a sharp dressed man.

9/10 – As we approach the end–there are three episodes left–and say goodbye to an iconic character, I’m feeling very sad about having to say goodbye to it all again. There was nothing like Twin Peaks on TV at the time it originally aired and there’s nothing like it now.