I know last week I said I was excited, but I had a feeling about this week. As such, I saved a meme, intending to use it for Twin Peaks eventually or for Riverdale season 2, probably when Archie did something crazy dumb. Well, it’s time to roll it out.

But first, we’ll get a history lesson on Blue Rose cases. As you may already know, these refer to cases with a supernatural bent. Like x-files. And like The X-Files, they have their root in whatever happened in a New Mexico town in 1947. UFOs???>Blue Book cases>Blue Rose cases. 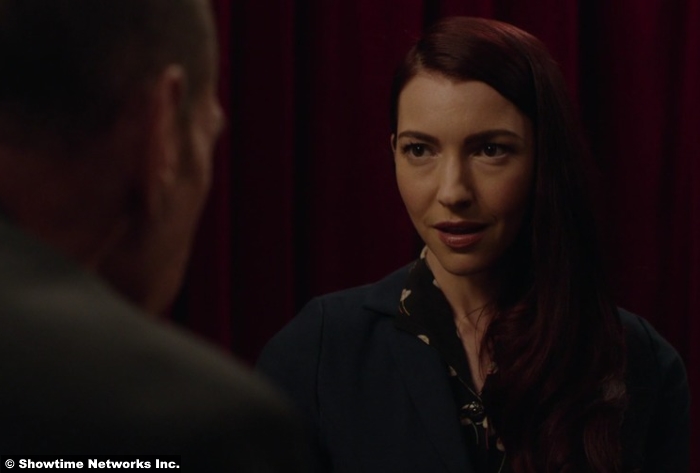 Gordon and Albert are explaining this to Tammy, whom they’re inviting to join the Blue Rose Task Force. My first reaction, if asked, would be “Hell yeah!” That’s kind of Tammy’s reaction as well, but she would be forgiven any reticence because just look at those red curtains. And oh yeah, the past roster of the Task Force.

Not a great track record. And speaking of the message on Desmond’s car, that’s the description for tonight’s episode, as well as Diane’s response when she’s deputized into Blue Rose. She’s still up to something, as Albert relays to Gordon, responding to a “Las Vegas?” text with a message that they, presumably Albert and Gordon, haven’t asked about it yet.

Albert, like the audience, really wants to get going on the case, but Gordon would prefer to have a nice glass of Bordeaux and take a load off for a moment with his French friend. Related: Donning a bodycon dress and curling up to David Lynch while he tells stories is extremely my aesthetic, so thanks for the visual, show.

It’s hard to let go and relax, though, when your whole world went to smithereens. Some people can put it back together and do the whole “strong at the broken places” thing, but it’s understandable when other people can’t. I, of course, am referring to Sarah Palmer, whose world-shattering was worse than a lot of people’s. We’ve seen just a limited glance so far this season, but it was enough to know that she splits her time between a bottle and an (overflowing) ashtray. We get to tag along for her re-up on just those things this week. However, something at the grocery store unsettles her after she notices the turkey jerky with the unlikely brand name “Albatross.” Is it the doppelganger aspect–turkey jerky is like beef jerky, but not? Is it Laura (Fire Walk with Me: “I’m gone. Long gone. Like a turkey in the corn”)? Whatever it exactly is, she becomes very upset, shouting that something happened to her and that men are coming. Woodsmen, maybe? Side note: It’s funny to me sometimes how a news story can be huge–all over the news–and then we don’t even think about it 10, 20 years later. Like, can you picture Ken Starr’s face? Do you remember Tailhook? Anyway, I bring this up because I was thinking about how old the employees at the supermarket were–teens, it appears–and I wondered if they even knew the whole Laura Palmer story.

The bag boy seems to know who Sarah is, at least, as he volunteers to deliver her forgotten groceries (vodka, bloody mary mix, carton o’ Salems) after Sarah storms out. Dunno if that happens, but something is up at the Palmer house when Hawk stops by to check on her. Sarah is still acting odd, the ceiling fans are whirring–never a good sign on this show–and there are bottles clinking in the kitchen, but she says no other people are there. What’s in the kitchen?

Sarah’s been the victim of a “bad story,” to borrow the phrasing she uses with Hawk, but she’s not the only one. The Hornes have had a run of bad luck, too. It only gets worse as Sheriff Truman arrives to tell Ben about the boy Richard killed and the woman, Miriam, that he attacked. At least Jerry made it out of the woods this week. Ben is saddened by the news about Richard, but not surprised. Richard never had a father, he says, and please factor that into your Richard’s parentage theories. Ben also arranges to pay for Miriam’s hospital bills and gives new Sheriff Truman Cooper’s key to give to old Sheriff Truman. It seems weird that Frank never asks where the key was mailed from, but if I let a little frustration hold me back, I wouldn’t have gotten to the next scene. Because after all my begging, meditation, and lit candles, she’s back. 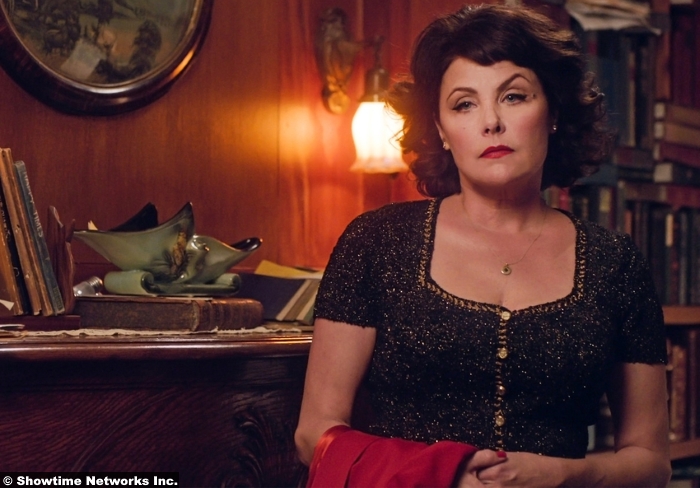 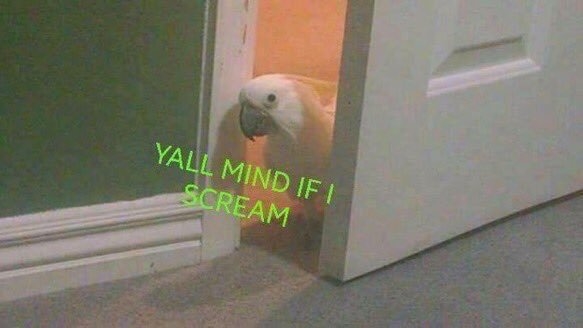 🙌 I actually did scream. But in true Lynchian form, those of us who might have been hoping for TWIN PEAKS: THE RETURN (OF 90s AUDREY HORNE), get her 25 years later, much harder. She might have looked like a badass when I was a kid, but now that I’ve passed her age, I can see how soft she was then. That’s not true anymore. She’s bitter and as frustrated with her not being in Twin Peaks (or at least, the Roadhouse) as any given viewer. She’s still so beautiful, though. She’s married to a tired and tiring man, who still has a rotary phone, and they have a spat over Billy and Chuck and Tina and the truck and is this going to be on the test? Billy is supposedly the dude whose dually Richard was using when he killed that little boy. Billy also went missing. Charlie, Audrey’s husband, finds out some details, but doesn’t (won’t?) tell Audrey what he’s learned. Oh, Audrey. How did it come to this?

Just as you’re getting used to seeing her, even through the head-spinning litany of names, she’s gone and we’re back to another hard woman: Diane. She searches for the coordinates that were scrawled on Ruth’s arm and I don’t think you’ll be surprised her map zoom gets her closer and closer to a little town in Washington. 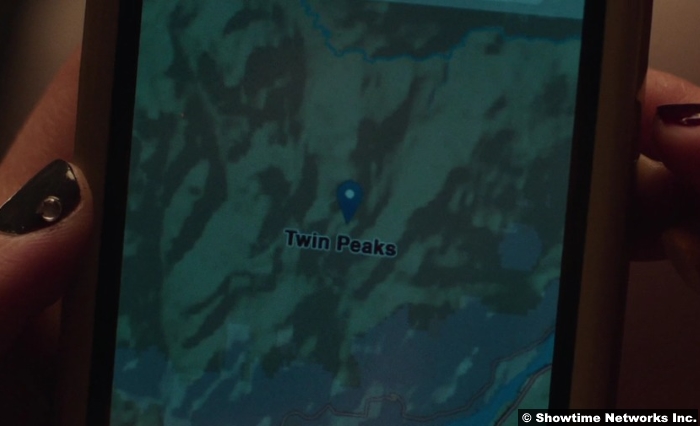 Everything that rises must converge. Earlier in the episode, we get a clip of Dr. Jacoby’s shit-shoveling show again and that’s a literal “again,” as it appears to be the exact scene we saw in part 5, with perhaps a bit extra. It is happening again. Something will turnip eventually.