I’ve written about how David Lynch seemingly lives to confound his audience, so obviously he followed that up with last week’s episode in which everything happens and then this week’s episode, which is one of the most straight-forward episodes in…ever.

And we’re talking about an episode in which the evolution of the arm, that brain on a tree, appears sprouted from a bullet hole. But before we get to that point, let’s go back to my favorite part of any episode: Hawk.

The sheets of paper he found in the bathroom door are from Laura’s diary. There are three in total, which means that one is still missing. The one we have that seems most important is the one where Laura wrote down what Annie told her in her dream (in Fire Walk with Me): “The good Dale is in the Lodge, and he can’t leave.”

Hawk shows the pages to Sheriff Truman and they try to figure out what they mean and how they got in the door. Sheriff Truman decides to consult with some other people to see what they think. His brother is unavailable and likely gravely ill, so he moves on to the next person on his list: Dr. Hayward (Warren Frost). This involves Skyping and a wonderful setup where Truman’s monitor is set into his desk, raised by a wooden lever. Considering that David Lynch was talking about building a table with modifications just before the series premiered, this is almost certainly his idea. 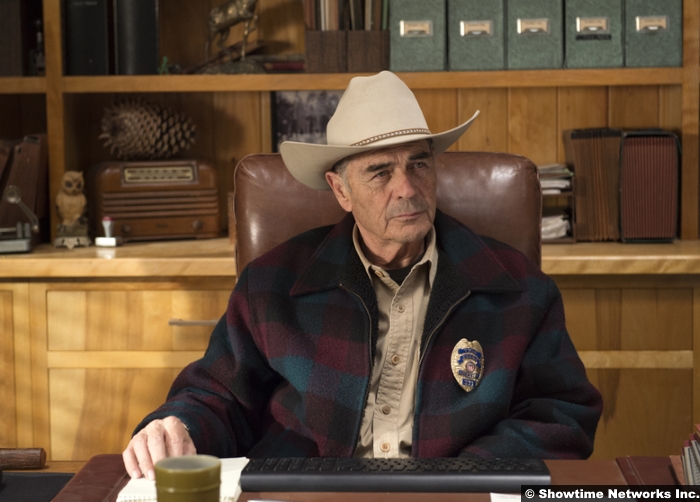 Dr. Hayward describes Cooper’s attitude after leaving the Lodge as disturbing. He was acting strange and more upsetting than that, “…I saw that strange face again.” And speaking of upsetting, the Doc thinks that Cooper visited a comatose Audrey Horne. If that’s making you think unpleasant thoughts about Richard Horne’s origins, yeah, me too.

Richard himself is absent this week, although Andy is handling his hit-and-run case. He’s found the man who actually owns the dually that Richard was driving, but he refuses to talk to Andy at his place. They instead make a plan to meet at 4:30 [a time the Giant told Cooper to remember], but when Andy checks the time on his Rolex [?!], it’s past 5 and the man hasn’t shown. There’s no signs of life at his place, either.

As for other Hornes, Jerry is lost in the woods and he thinks his car has been stolen. Benjamin is investigating a strange hum his secretary (?) Beverley (Ashley Judd) has reported in the Lodge. She also shows him that someone (Jade in Vegas) has mailed back one of their old keys. At first, he’s bemused, since they switched to card keys years ago, and then he realizes it’s the key to Agent Cooper’s room. As for that strange hum, it could be Audrey in her hiding place or Josie trapped in wood still. As for Audrey, HMMPH. 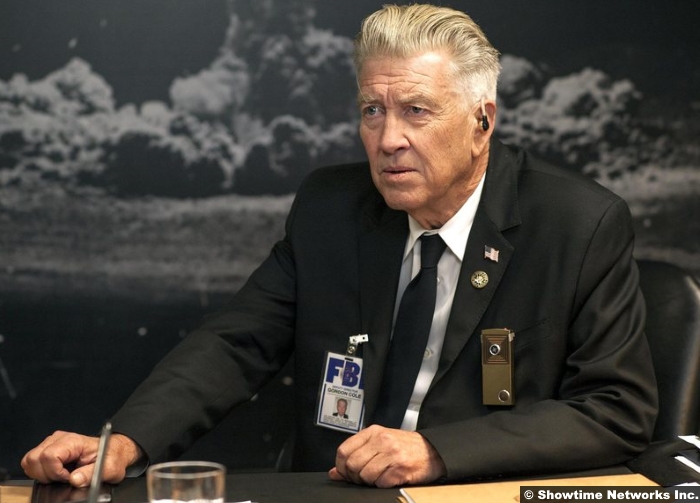 Albert’s meeting with Diane was a failure, so Gordon has to go recruit her. She’s caustic, but in an endearing way. (Well, I find it endearing!) She refuses everything they ask of her, while still giving it to them. So does end up going to the Dakotas to meet with the purported Dale Cooper. It is clear from their meeting and the way she reacts to him that something bad happened the last time she saw Cooper. Perhaps it’s what made her into the prickly pear she is today. After all, Cooper is the man who recorded messages for her about the trees in Twin Peaks. It’s not hard to tell this ain’t that guy. And as I wrote last week, of course she knows it’s not him. “Who ARE you?” she asks. 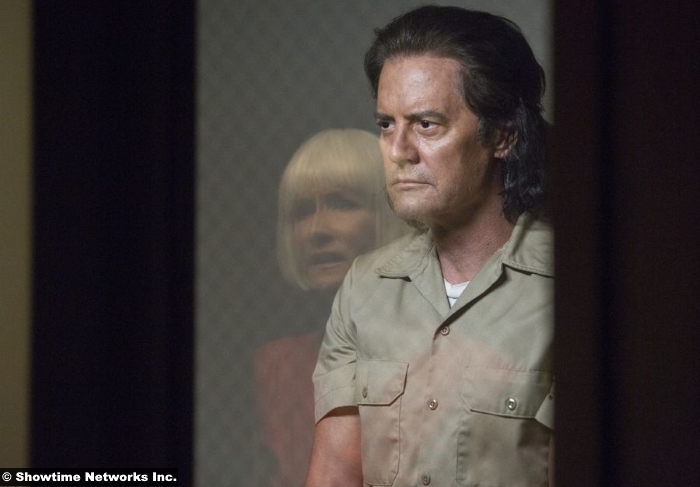 Before this, Tammy points out an oddity about that Cooper’s fingerprints that she discovered last week. One of them is reversed. Gordon demonstrates on Tammy’s fingers that that finger matches the reversed word in his greeting to Gordon: “I’m yrev–very happy to see you again, old friend.” After their trip, the Evil Coop blackmails the Warden into letting him go. Whatever the Warden did, it’s bad. It’s involves dog legs bad.

Other visits from the Man: the rep from the Pentagon visits South Dakota about that match to Major Briggs’s fingerprints. She’s stunned to find out that there’s actually a body. The only problem is, the body was from a man in his 40s and Briggs had passed that age a while back. In Vegas, a trio of brother (?) detectives (they all share the surname Fusco) visit Dougie to ask about his car, since it was blown up. That meeting is not illuminating for anyone. Janey-E has come to pick Dougie up and on their way across the courtyard, Ike the Spike makes his move. His spike was bent last week, so that may be why he’s toting a gun this time. As soon as he raises, it’s like Dougie has a flash of Coop–he takes Ike down and gets him to drop the gun, as the brain tree appears to hiss, “Squeeze his hand off!” I don’t think he got the whole hand off, but there was a gross chunk of flesh stuck to the gun when the cops got there. I wouldn’t be surprised if someone got a clip of Dougie in action and it went viral enough to reach someone who knows Cooper. Or if Dougie himself was on the news–several bystanders are interviewed, including one who says that Dougie “moved like a cobra.”

Just so you know we’re still in David Lynch’s world, we spend two minutes watching some dude sweep. This is at the Bang Bang Bar, which is owned by Jean-Michel Renault (Walter Olkewicz), presumably the late Jacques’s brother. They’re still doing gross things with underage girls, don’t you worry. There are, after all, plenty of other things to worry about in this world.

9/10 – I have to say, this is my favorite episode so far of the new series, even if Audrey Horne has not appeared (STILL). There is still plenty of trademark Twin Peaks weirdness, but the plot is moving forward. And just when you thought that David Lynch might be actually be offering up some fan service, he makes you watch a guy push peanut shells around for minutes on end.