Twin Peaks 2017: Part 9 – This season’s storylines start to come together

And we’re back! After last week’s vacation, Twin Peaks returns this week with an episode that’s a bit of a cold shower after the last one.

Of course, if you’re not a fan of the surrealistic pillow that was the last episode, then you might have found this week’s episode very reassuring. Things seem to be coming together now. No one knows what the hell is going on, but the storylines are linking up.

Both Coopers make brief appearances this week, but we don’t spend much time with them. The Evil Coop meets up with Chantal (Jennifer Jason Leigh) and Hutch (Tim Roth), two more of his seemingly endless string of acolytes. He gives them jobs to do–like kill the warden–and sends a text to someone that reads, “Around the dinner table, the conversation is lively.” 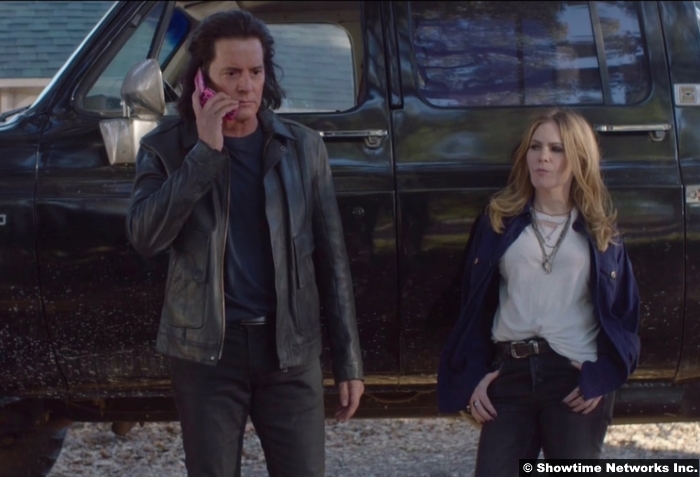 As for Dougie, he and Janey-E are at the police station waiting to be dismissed by the brothers Fusco, the trio of detectives who first came to see him about his exploded car. They discover that Dougie has no records prior to 1997 and speculate that he might be in witness protection. I wonder briefly why they’d think the Marshals would put a witness in Las Vegas of all places, but then switch to trying to will them to fingerprint Dougie. Just when I’m thinking all hope is lost, one of them brings Dougie a fresh cup of coffee and takes the empty, which he bags into evidence. YES.

Meanwhile, Dougie is mesmerized by an American flag, until he’s distracted by a woman’s red pumps. You know who else wore red heels? Audrey Horne. I hope that this is a hint that she’ll be coming soon. [By the by, Janey-E and Diane are also wearing red shoes. And while we’re here, whispering in the brackets, it turns out that no one has really batted an eye at Dougie’s goofiness because the “real” Dougie was in a car accident that has had lingering effects.] While Dougie is in his reverie, the Fuscos get a tip on Ike the Spike’s location and the hitman is taken into custody.

Outside of the dual Cooper scenes is where everything else starts knitting together. Well, that’s if you don’t count the scenes with the Hornes, which do not include Audrey (SIGH), but do include Johnny running head-first into a wall and maybe being dead, Benjamin still hunting the source of the hum, and Jerry, still high in the woods, getting into a tiff with his foot, which tells him, “I am not your foot.” 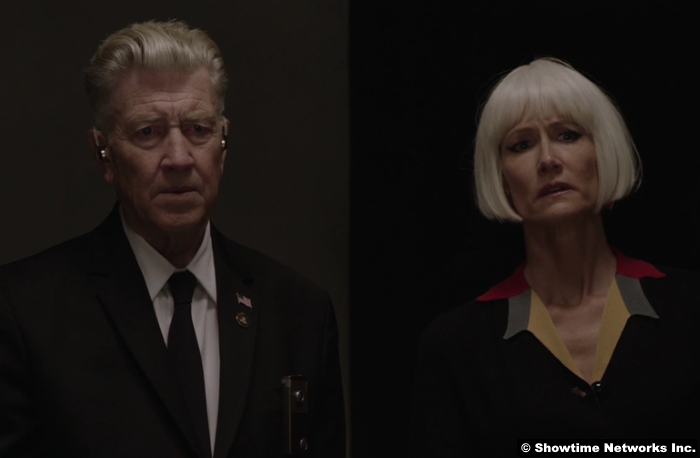 Anyway, Gordon gets a call from Col. Davis about Briggs’s body in Buckhorn and he, Alfred, Tammy, and Diane make the trip. They’re briefed on the Hastings case, including Dougie’s ring being found in Brigg’s belly. Tammy interviews Bill Hastings, who tells her that he and Ruth (the departed librarian) were having an affair, seemingly bonded over their interest in things like alternate dimensions and time travel. To that end, Hastings ran a blog about their pet obsessions and he claims that he and Ruth actually went to another dimension, which he calls the zone. There, they met “the Major,” whose head floated away after they gave him coordinates and after he said, “Cooper. Cooper.” Then Ruth was killed. Hastings swears that he didn’t kill Ruth and I’m inclined to believe him. I would guess that whoever killed Ruth, killed her for those coordinates, which she wrote on her hand–remember, her body is still missing. Tammy shows Bill a six-pack photo array and he immediately picks out Briggs’s photo as the Major he met in the other dimension. While Gordon and Alfred are watching the interview, Diane gets that text that Evil Coop sent. She doesn’t tell anyone about it, though. My guess is that she’s working overtime trying not to be vulnerable. 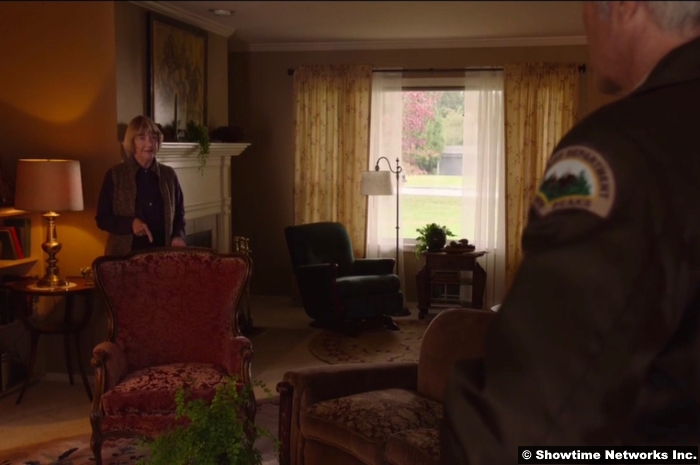 Back in Twin Peaks, Sheriff Truman, Hawk, and Bobby go visit Betty (Charlotte Stewart), Bobby’s mom, to ask her about the last time Major Briggs saw Cooper. She reveals that not only did the Major tell her that they would visit her one day–although she assumed it would be the other Sheriff Truman–but he left her something to give to them. Bobby is visibly moved that his dad had faith in him that he would grow up to be a good man. (It also seems to be a throwback to the “vision of light” scene. Also, RIP Don S. Davis.)

Betty leads them to a chair with a concealed panel. It pops open to reveal a small metal tube. At the station, where Chad still sucks, Bobby shows them how to open it and inside are a couple of notes not seen since Briggs saw Cooper. They instruct the men to go to Jack Rabbits Palace, which was Bobby’s childhood make-believe spot, a couple of days from then. The second note is in code, but does say the same thing Briggs told Bill Hastings and Ruth–“Cooper. Cooper.” “Two Coopers?” Yes. YES. 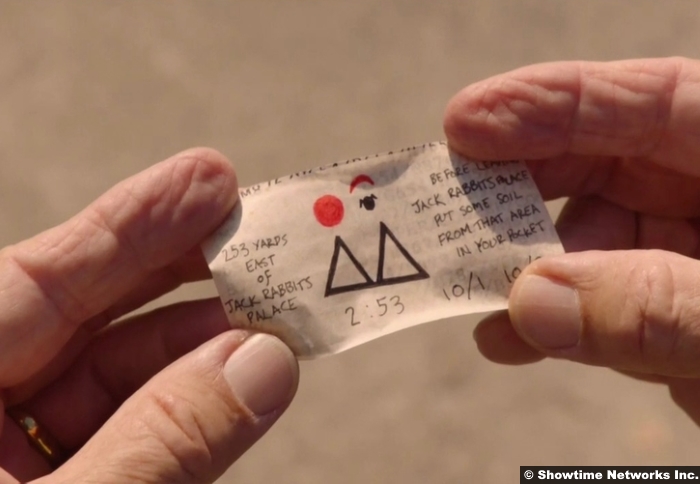 After that, we end up, as almost usual, at the Bang Bang Bar. There we meet Ella (Sky Ferreira) and Chloe (Karolina Wydra), who talk about Ella’s being fired (from the Double R?) and also talk in code about penguins and zebras. Ella has a nasty rash, which she won’t stop scratching. It’ll probably turn out to be nothing, but I can understand what it feels like to have an itch you’ve just gotta scratch. Still don’t wanna see my waitress clawing her armpit while I’m trying to eat my burger, though.

8/10 – After Part 8’s wild ride, Part 9 returns with a more conventional episode, or at least as conventional as Twin Peaks gets. Our many storylines seem to be beginning to come together, although I say that knowing that next week, I may get twenty minutes of a random dude washing his car. Anyway, I know that if wishes were horses, beggars would ride, but I’m still going to send my plea out into the crackling universe: BRING ME AUDREY HORNE. Please?