Chad sucks. I know I’ve said that before, but that was just when he was mocking mental illness and stinking up the conference room with his lunch. This week, we get a whole new angle on his suckiness and it isn’t good for anyone.

A few weeks ago, in part 6, we met Miriam Sullivan (Sarah Jean Long), a Twin Peaks schoolteacher who loves pie and coffee at the Double R as any right-thinking person would. That was also the same episode where Richard Horne ran down that little boy, an act that Miriam unfortunately witnessed. That’s what brought Richard to her house this week. She tells him that she’s already talked to the police and that if anything happens to her, she’s sent a letter to the Twin Peaks Sheriff’s Department. It’s almost as if she thinks she can reason with him. But Richard is not a reasonable man.

The scene is shot where we can barely see Miriam standing in her doorway. She’s blotted out by Richard’s reflection. It’s foreshadowing for how he will come through her door. I’m not going to say for sure that she’s dead after he’s finished with her, because I was sure Johnny Horne last week, and yet here he is this week, bruised but alive. They’ve got him kitted out like a hockey goalie and tethered to a chair. An unnerving teddy bear with a clear globe for a head–shades of the Arm–greets him over and over again. 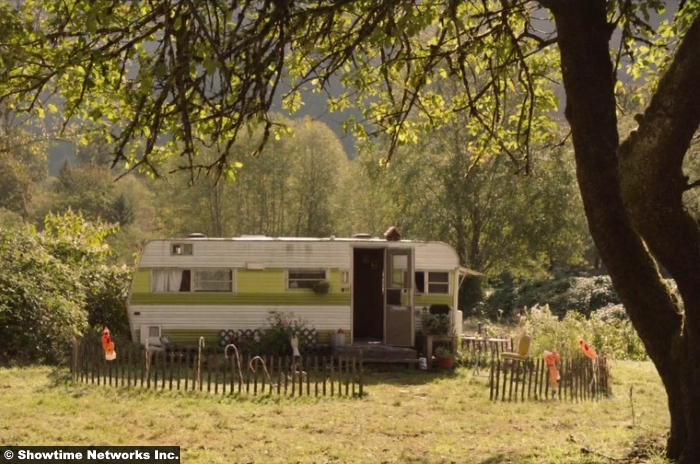 It would be funny if it were not the soundtrack to Richard barging in, terrorizing Sylvia Horne (Jan D’Arcy), WHOM HE CALLS GRANDMA, and taking her money. He’s intent on getting out of town, but not before tying up all the Miriam loose ends. Before he left her place, he called someone to intercept the letter she sent. That someone is our crown prince of suckery, Chad. Of course Chad is in cahoots with Richard. I should have expected nothing less.

Chad does manage to take the letter, but not before making both the mail carrier and Lucy suspicious.

The scenes with Miriam and Sylvia are upsetting and I wonder how they’ll be interpreted. Depictions of abuse have always been at the heart of Twin Peaks and we get them in spades this week. Besides the aforementioned scene, there’s a quick jump to Shelley’s daughter Becky being harangued by her dirtbag husband in what is a sad flashback to Shelley’s marriage. There’s also a scene that starts funny in Las Vegas, with cotton candy-colored Candie smacking casino boss Rodney Mitchum (Robert Knepper) when she’s trying to kill a fly. He’s fine, but she’s hysterical, a reaction that could be read as Lynchian over-the-top or as someone who’s been abused before.

I wonder about that because I saw someone ask why David Lynch hates women, a query they hashtagged with “misogyny.” It’s a question I personally find absurd, because I see love in his depictions of women. What do you see?

The Mitchums, for their part, see TV coverage of Ike the Spike getting arrested, which they find hilarious until they see it’s Mr. Jackpots who stopped him. Now they know he’s really Dougie Jones and they’d like their money back probably. That’s bad enough for Dougie, but it turns out his coworker Tony is plotting against him with the help of Duncan Todd (Patrick Fischler), the guy who’s been ordering the hits on Dougie and others. You might recognize Fischler from Now That’s What I Call Terrifying, the Winkie’s Diner scene in Mulholland Drive. Anyway, Tony and Duncan were involved in some insurance fraud that cost the Mitchums $30 million and they conspire to pin it on Dougie. Tony is not the smoothest criminal, directly quoting Duncan’s directive to the Mitchums when he tells them that they’ve got “an enemy in Douglas Jones.”

As forces gather against him, Dougie is taken to the doctor, where he’s in fine health. Then he goes home, eats chocolate cake, and is sexed up by his wife. I don’t know a better way to describe that. It was a little unsettling to watch. (The David Lynch thesis statement.) 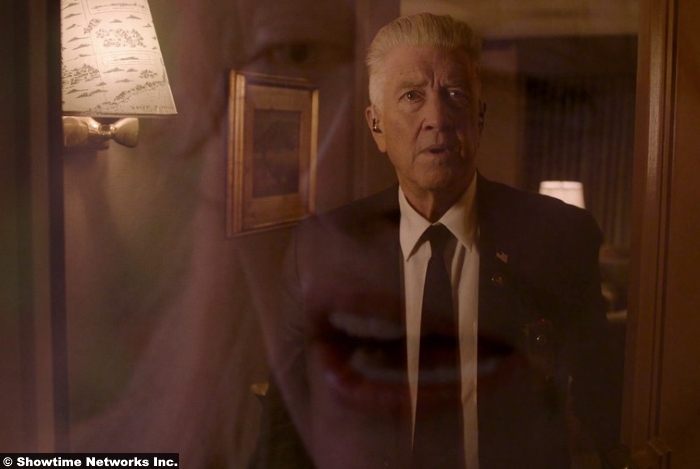 Up in South Dakota, Albert is on a date with Constance, the medical examiner. Good for him. It’s good for Gordon Cole, at least, who watches on with visible delight. A much less pleasant experience for him happens later, when Albert knocks on his door. Gordon sees a vision of Laura Palmer, another abused girl in the Twin Peaks world. In fact, THE abused girl.

Albert is there to tell Gordon about that text Diane got last week. She didn’t tell them about it, but they know. She sent a response, saying that Hastings was going to take them to the site. In light of this news, Gordon opts to keep her closer.

Maybe that’s all you can do when the glow is dying, when there are no stars. 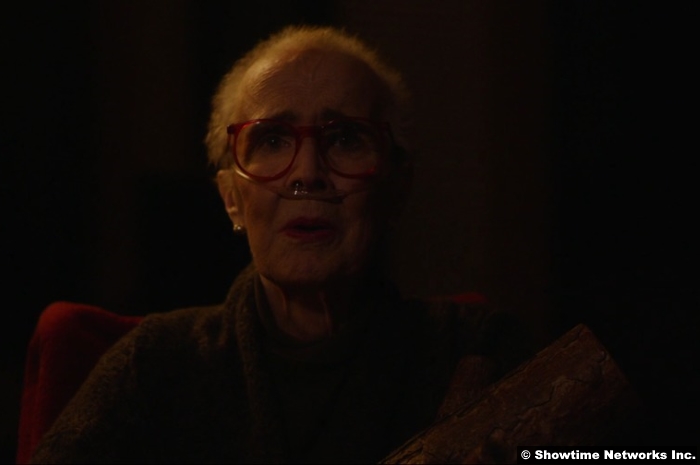 We end our episode this week with a song of the same name–“No Stars”–written by Lynch and performed by Rebekah Del Rio, who made us all cry in Mulholland Drive with her appearance at Club Silencio and who, this time around, is wearing a chevron dress as she performs in front of red curtains. But before that, we get to visit with Hawk, who’s listening to Margaret, the Log Lady, tell him what the log knows. Laura is the one, she says. When the glow dies and only darkness remains, it will be important to remember the good people you have around you. The log knows.

8/10 – Not a lot happened this week, but it was just nice to spend time in Twin Peaks with the good people we know there. We also know some bad people there now, but let’s put them aside for a week and think about the good things. Like that Nadine is living her silent drapes dream. Or that there is still damn good pie at the Double R. I could yell on the internet like Dr. Jacoby–I mean, I could yell more–but I’ve heard from a very reliable source this week that no winter lasts forever.