Twin Peaks 2017 Review: Part 6 – David Lynch and Mark Frost throw everything at us

In last week’s episode, Dougie’s boss sent him home with a stack of insurance case files [“Case files,” Dougie repeated] and told him to return the next day having gone through all of them. Instead, Dougie followed the lights and signs the Red Room’s been sending him and made crude, childlike drawings all over them. His exasperated boss asks how he’s supposed to make sense of it and Dougie responds, in a meta moment, “Make sense of it.”

That is what the show asks of us. Unlike Dougie’s boss, though, we haven’t yet had the light bulb moment where we see the pattern. [As for that, I would bet it had something to do with Dougie’s co-worker Anthony (Tom Sizemore), whom Dougie announced was lying last week after he saw a green light over Anthony’s head.] There are lights and signs that Agent Cooper is coming back to us, though. Last week, there was his fixation on certain words and phrases–like “agent”–and this week had him fascinated by a police officer’s badge. But nothing was as dramatic as Mike speaking to him from the Red Room, telling him it was time to wake up. The consequences of not doing so are clear as well: “Don’t die.” 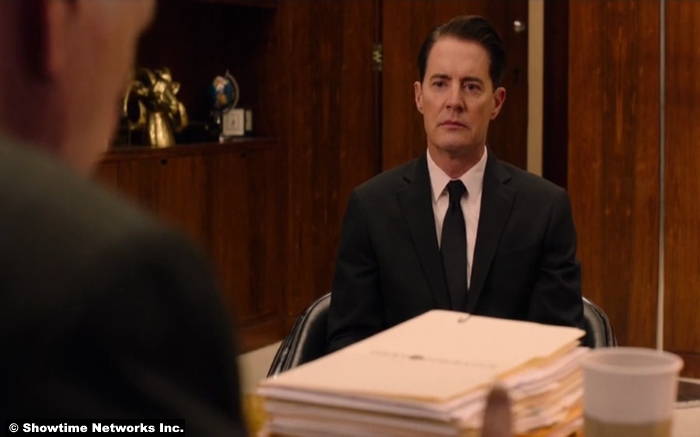 He means that in a Red Room kind of way, but death is a real hazard for Dougie, as we’ve already learned. The bookies he owes blew up his car last week and although Janey-E gives them $25k this week, something’s been set in motion that has put him in the crosshairs of Ike “The Spike” (Christopher Zajac-Denek), a hitman who this week takes out the woman who called for Dougie’s death last week.

That wasn’t the only death we witnessed this week, as our return to Twin Peaks the town had us and Fire Walk with Me’s Carl (Harry Dean Stanton) witnessing the hit-and-run death of a little boy. We know whodunit–it was Richard Horne, furiously speeding in his dually after Red (Balthazar Getty) freaked him out with a coin trick AND kept calling him “kid.” “I’ll show you a fuckin’ kid,” he whines. Welp, you sure did. What all this (and Carl’s witnessing the boy’s soul (?) leaving) means will have to keep for another week. But for super-fans, yes, that is the same intersection from FWwM where Mike yells at Leland and tells Laura, “It’s him–it’s your father!” Also, since we’re in *pay attention* mode here: In the first episode, the Giant, who might be Sonny Jim in our world, told Coop to watch out for Richard and Linda. We’ve met Richard and we also got a reference to a Linda this week, although we did not meet her. And by the way, Charlotte last week was played by Grace Victoria Cox, whom you might remember as “Melanie” on Under the Dome. I didn’t recognize her as a blonde. 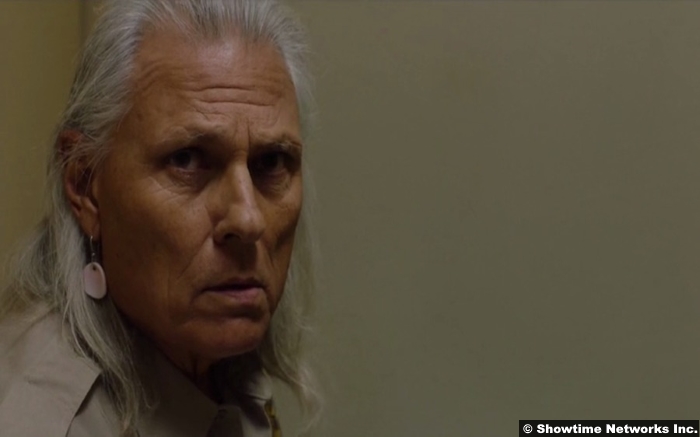 Now back to the coin tricks! Hawk pulls off a pretty cool one in the Sheriff’s Dept restroom. He drops a coin on the floor. It’s an Indian Head nickel, which obviously reminds him of the Log Lady saying that the search for the missing whatever will have something to do with his heritage. He scans the stall and spots a logo plate for Nez Perce Manufacturing [Hawk is Nez Perce] on the door, which is slightly peeled open at the top. Hawk manages to pry the door apart, much to the consternation of department turd Chad (whom we see later mocking the suicide of Sheriff Truman’s son), and finds a few pages crammed in there. It seems obvious that these are some of the pages that were ripped from Laura Palmer’s diary, but which ones? Anyway, Chad sucks.

Albert does not. Although he’s very angry at Gene Kelly for singing about (and singing in) the rain, he does lead us to a longtime fan-favorite character. When he last saw him and Gordon, they were talking about finding a woman who would be able to tell if Evil Coop was the real deal. That would be Diane, the first person Agent Cooper addresses in the first episode. (“Diane, 11:30 AM, February 24th. Entering the town of Twin Peaks, five miles south of the Canadian border, twelve miles west of the state line.”) We don’t get much of a chance to spend time with her or to even hear her speak, but we do learn that her last name is Evans and she’s played by, as fans suspected, Laura Dern. And she’s going to know the Cooper they have in custody is a fake. I can still see blue velvet through my tears, but they’re tears of joy. 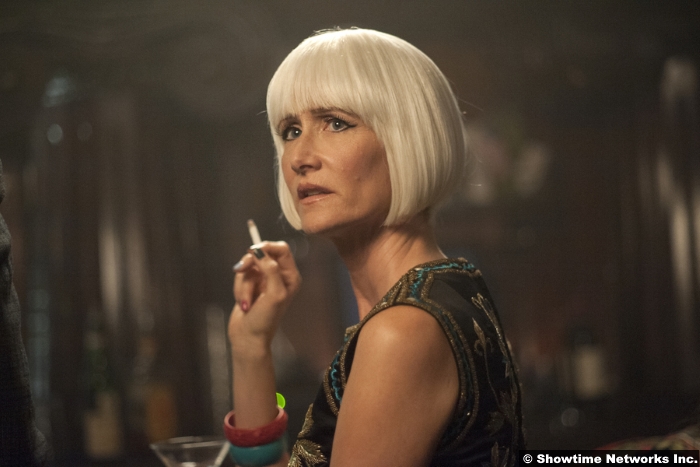 9/10 – A week after I accepted that I was back in the dream world, David Lynch and Mark Frost throw everything at me. The tease that Cooper might be coming back to himself, the (possibility) of the missing pages from Laura’s diary, little connections to the original run and FWwM, a terrifying hitman, and DIANE. It is happening again. PS: Chad sucks. 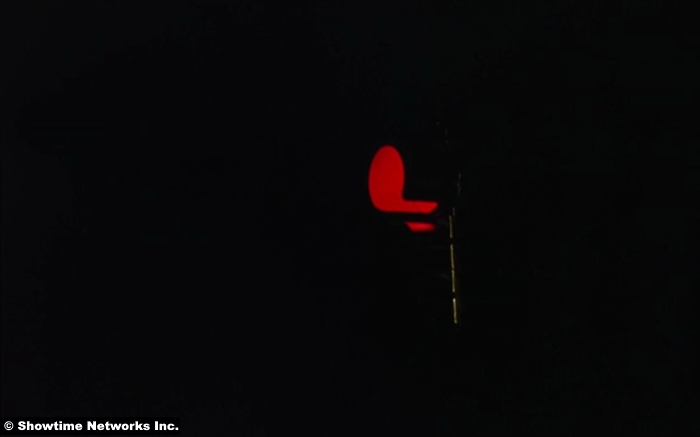