Sometimes when we’re consuming entertainment, it can be hard to accept that great entertainment–entertainment that is actually art–should give us what we need, not what we want. In the case of Twin Peaks, which is definitely art, what we wanted might have been for ol’ Dale Cooper to pop back into our dimension and get right to work as if no time had passed. But 25 years have passed.

That’s why, even though it might have been frustrating to some viewers, this one included, we had to wait. As I’ve said before here, David Lynch does not do fan service, not in the traditional way. He does what he wants and you get what you need.

Our story starts tonight with two other men who do what they want, but in a not positive way. We join Richard Horne and Mr. C’s road trip already in progress. It was unclear last week what Mr. C wanted with Richard, but it becomes dreadfully clear once they arrive at their destination. It’s one of the coordinates Mr. C has been following and he sends Richard up to check it out. Jerry Horne, who must have smoked some weapons-grade weed, is also there, looking on in terror as Richard is zapped into oblivion. 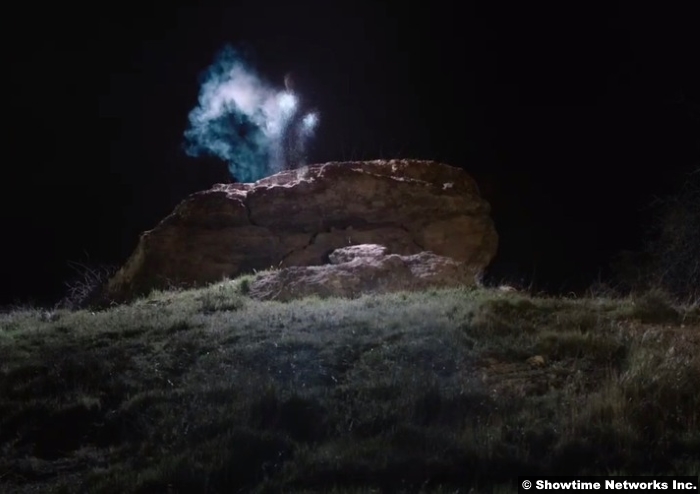 He was nothing more than a patsy for the father who sends him off with an emotion-free, “Goodbye, son.” And a “:-) ALL” text to Diane.

Back in Las Vegas, the FBI has finally found the right Dougie Jones, but no one’s home. His neighborhood is the happening place to be, what with the FBI coming by, and Chantal and Hutch staking out the house. No one’s home because Dougie’s in a coma after his electric escapades last week. He’s being watched over by Janey-E, Sonny Jim (“Does a coma have something to do with electricity?”), and Bushnell. The Mitchum brothers also stop by to pay their respects and to bring some finger sandwiches. Then they borrow a key to drop food at the Jones house, which is where they’re witnesses to a shootout between one of the neighbors and Chantal and Hutch.

Bradley: What the fuck kind of neighborhood is this?

Rodney: People are under a lot of stress, Bradley.

When the firing stops, the snack-loving hit couple are dead. RIP, Chantal. Your love for snacks was extremely relatable.

At the hospital, Mrs. Jones and son leave for a bathroom break, while Bushnell follows the sound of a strange electric hum. That gives Dougie the perfect space to wake. Except it’s not Dougie. He’s back. It is happening again.

The name of this season has been perhaps more meaningful than we realized. It doesn’t just refer to the return of the show–this season has been about the return of Dale Cooper. He’s back, “finally,” as Mike the One-Armed Man and we say in unison. He immediately makes plans for Janey-E and Sonny Jim–asking Mike to make a Dougie for them, after Mike tells him that Mr. C is still out in the world. Then he gets the Mitchums to get their plane ready for Spokane. By that point, Bushnell has heard that the FBI has been at the office asking about Dougie and Cooper leaves a message with him if a man named Gordon Cole calls. Then, Dale Cooper, one of the most upstanding men who’s ever graced our televisions thanks Bushnell for his kindness. His former boss asks, as Julee Cruise’s “Falling” starts to swell on the soundtrack, what about the FBI?

God, that felt good. Waiting this long to see this moment was not what we wanted, but when the moment came, it filled a need.

Cooper leaves Janey-E and Sonny Jim at the Mitchums’ casino with an assurance that he’ll be back “through that red door” and that they’ve made his “heart so full.” Janey-E seems to realize then that this isn’t Dougie. He never was. We thought Cooper was lost in a fog and we just had to wait for him to wake up, but he was here the whole time.

Whew. As Coop is on his way to Washington, Mitchums in tow, the emotional hits just keep coming. It seems as if the text Mr. C sent Diane activated her like the Manchurian Candidate because she stalks off to Gordon’s hotel room with her hand on the gun in her purse. Gordon knows she’s coming, though, and he’s not alone. If we’ve learned anything from Twin Peaks, it’s the importance of having friends you can rely on. Gordon’s with Alfred and Tammy, who are all witness to Diane’s story about the last time she saw Cooper or what she thought was Cooper. He kissed her and she felt the wrongness in him. It made her afraid and then he raped her. It is harrowing, an awful story to hear, and Laura Dern acts the hell out of this scene. She conjures up Diane’s trauma and her anger and her fear as she realizes she’s not herself. Diane takes out her gun, but Alfred already has his in his hand. Before they can even think, she’s disappeared. She was a tulpa, you see. She was manufactured. And now she belongs to the Red Room.

We end the episode, as we have so many, by going to the Roadhouse, where young upstart Edward Louis Severson is playing. You may know him better as Eddie Vedder. As he performs, a surprise. Audrey and Charlie have finally made it there. An even bigger surprise comes with the MC announces that the next performance is “Audrey’s Dance.” 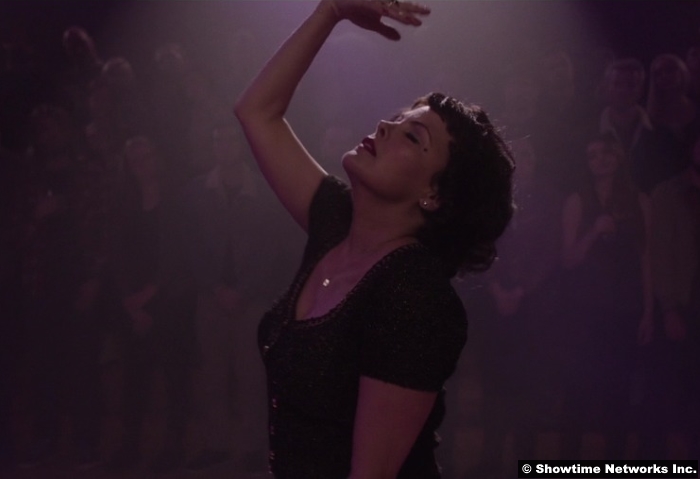 The floor clears and the familiar starts up and after a moment of hesitation, Audrey walks to the center and sways. The reverie is broken by some lunkhead yelling at another man about his wife. All of a sudden, Audrey wakes in a blindingly white-lit room, staring into a mirror in shock. Audrey, where are you? And could her awakening and Coop’s awakening have had anything to do with Richard’s electrocution on that rock? (“Two birds, one stone.”)

10/10 – WOW. Honestly, I kind of want to give this an 11 out of 10, but I think I’ve already broken the scale for this show. It may have taken 16 episodes, but David Lynch and Mark Frost have delivered an episode with moments that are going to be talked about for a long time. It was worth the wait.