Twin Peaks 2017 Review: Part 14 – Okay, so last week was gently numbing us to prepare for this week!

We were entering a dream world and in that case, you have to take precautions.

A few weeks ago, I mentioned how describing an episode of this season felt like I was trying to describe a dream. Last week I brought up the possibility of seeing David Bowie again. This week, he gave us a recurring dream and David Bowie (and an episode in memory of David Bowie). I really feel like I’m on the wavelength now. Or at least I feel a little like Bradley Mitchum when he saw that cherry pie in the box.

So it turns out that Gordon Cole has a recurring dream with Monica Bellucci because of course, he does. Playing Monica Bellucci in his dream is…Monica Bellucci. Goldurnit, I love David Lynch, that son of a gun. Anyway, in the dream, she says, “We are like the dreamer who dreams and lives inside the dream.”

Yeah, I’m with you, Gordon. However, although it seems baffling–it is dream logic, after all–Monica points him to a memory from the past, a memory with Jeffries and Cooper. It was when Jeffries was there and not there in the office and he pointed to Cooper and asked, “Who do you think that is there?” Gordon and Albert might have missed it at the time, and they’re only now just remembering it, but it’s a clue.

The idea of duality has already been established in the episode as Albert has already told Tammy the origin of the Blue Rose cases. It all started with a woman named Lois Duffy who was murdered by Lois Duffy. Before the double Lois died, she said, “I’m like the Blue Rose.” Tammy is able to figure out that she was a tulpa, which earns her Albert’s approval.

After Gordon retells his dream, Diane joins the group and Albert mentions the ring they found in Major Briggs’s body and its inscription. Diane says that her half-sister is Janey Evans Jones and she goes by Janey-E. “WHAT?!” I exclaimed, and it’s a surprise I don’t spend most of each episode yelling that.

Diane’s story is implausible, but it could be true. The same can be said for the other stories we hear in the episode, as there is a lot of allusion toward the stories we tell each other. We see it when the Sheriff’s Dept gang (Sheriff Truman, Hawk, Bobby, and Andy) finally make it out to Jackrabbits Palace. It turns out it’s just an old ruin of a tree–my log has a message–but it’s where Bobby and his dad would sit “and make up great tall tales.”

They follow the instructions the Major has given them and that takes them to a spot where Naido is lying. She is the woman we saw in episode 3 as Cooper passed back into our dimension–she was the gal with her eyes sewn shut. This spot has a swirl much like the one that tried to take Gordon in Buckhorn. This time it takes Andy. Of all people to be beamed into another dimension, it’s the sweetest man in Twin Peaks. 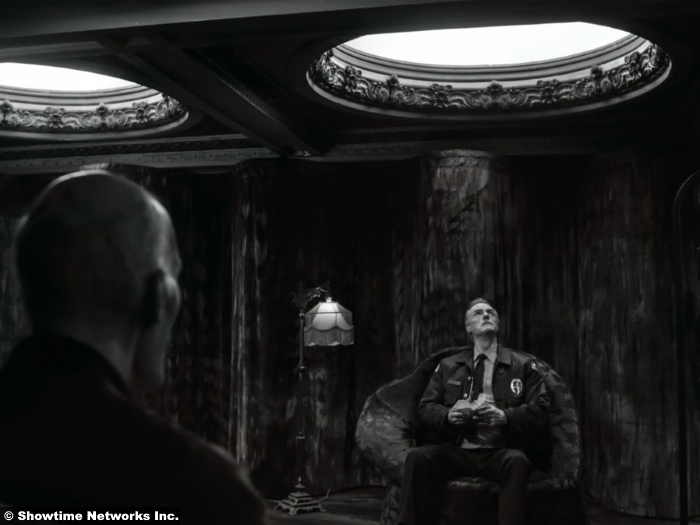 He meets the Fireman, who looks like the Giant (he’s also played by Carel Struycken) who tells him a story in images that includes the doppelCooper. The story changes Andy a little, as when he returns, he’s more commanding than we’ve ever seen him, scooping up Naido, who has to be protected because something wants her dead. This story cannot be told, though. Andy warns them not to tell anyone.

This isn’t the first time someone’s been hesitant to tell a story on Twin Peaks; it’s not even the first time this season. (I’m sure y’all can think of other instances, but just off the top of my head, I’m thinking of Hawk telling Truman, “You don’t ever wanna know about that.”) And there are many reasons not to tell a story. One reason is protection. That seems to be Andy’s and Hawk’s motivation. They’re protecting someone by not telling a story. You can also protect yourself. That’s the motivation behind young Freddie (Jack Wardle)’s reticence to tell his story. Freddie, like James, is a security guard at the Great Northern. He’s come to Twin Peaks because the Fireman told him a story. James gets the story from him because for all I’ve clowned him about not being cool, he’s usually always been kind. His kindness is rewarded with an unbelievable story, but James is from Twin Peaks. He’s heard unbelievable stories before. And he knows what secrets can do.

After hearing Freddie’s story, James goes to check the boilers under the hotel and I think he’s going to discover the source of the hum and I hope his story doesn’t end in tears. Or blood.

I no longer know if that will be true for Sarah Palmer. She’s finally ventured out again, stopping into a bar to have a drink. She’s approached by a trucker, reminding me of Buella’s statement in the first episode this season: “It’s a world of truck drivers.”

This scene is not unfamiliar to probably any woman in the world. A man approaches her and she tries to be polite, but he won’t take a hint. She tries to be a bit more forceful and he threatens her. She warns him and still, he doesn’t back down. He says things to her like the kind of things BOB used to tell Laura. So she removes her face and lets him see the darkness within and then tears out his throat. Whom among us hasn’t been there? 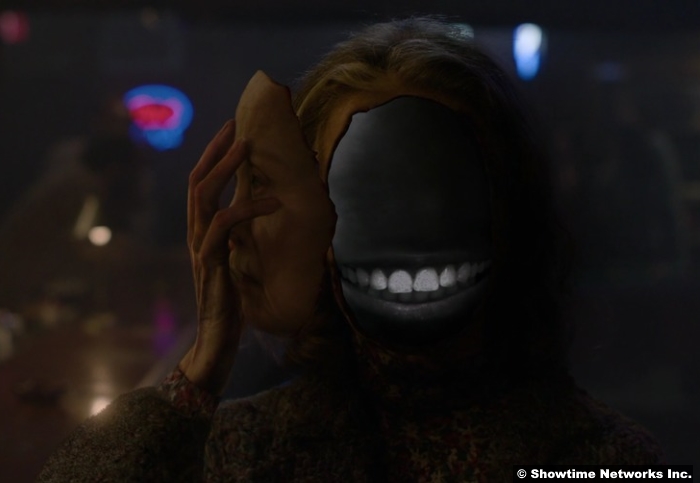 He just fell over. He should have listened to her story.

9/10 – Woooo! After last week’s kinda medium episode, we are back, baby! We got a lot of story in this episode–for an episode that felt very fast-paced, it was really a lot of people telling stories. I didn’t even get to mention the one that Tina’s daughter tells at the Roadhouse at the end, about Billy showing up at the house dripping blood. It’s another dream-like tell, especially the detail where she can’t remember if her uncle* were there or not. Or the story that Naido might be telling in little chirrups in the cell they’ve put her in for her own protection. (Or Lucy carefully dressing her in pajamas!) I didn’t even get to mention that Chad still sucks and the Sheriff’s Department has known it for months and so he’s now in a cell, too. What a great episode.