In the last episode of the original run of Twin Peaks, the dearly departed Laura Palmer tells Agent Dale Cooper, “I’ll see you again in 25 years.” If this were a series by anyone other than David Lynch, I’d look at the show’s return 25 years after the film Fire Walk with Me as a funny coincidence. But this isn’t a show by anyone else. 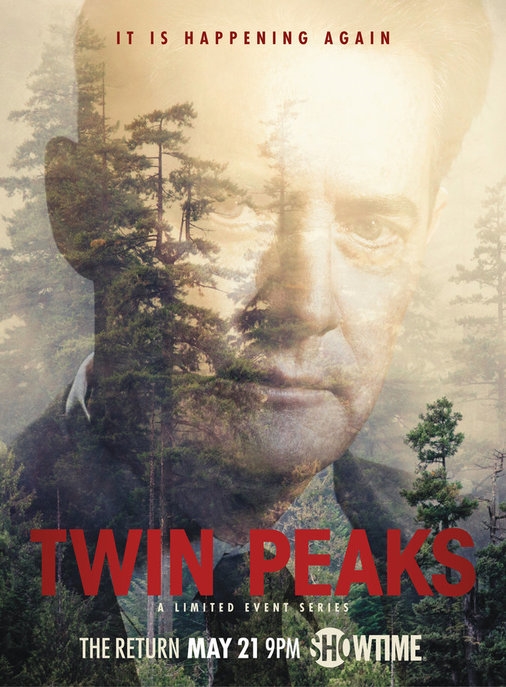 Twin Peaks is pure, uncut David Lynch (and Mark Frost). And I’ve been mesmerized by it since its original run, when for some reason, my parents let me watch it. It’s been fun to see it become a cult classic for people who, in some cases, weren’t even born when it first aired. (I don’t know how that’s possible, but I’m not a scientist.) Anyway, since it’s become a cult classic, it tends to be boiled down to just a few elements, like a chevron floor, the owls are not what they seem, the log lady, and damn fine coffee. Usually lost in the mix are the feelings it gives you, like dread and loss and horror. David Lynch, being the David Lynch-iest man around, delivered on those in owl-defaced spades last night. [Note: Obviously, this being Twin Peaks, everything that happens is very open to interpretation and although this is me right now with the plot, I am bound to miss things/get things wrong. And there will be a lot of ground to cover in these first two weeks, when Showtime will be airing two episodes each week. So let’s discuss it together.] 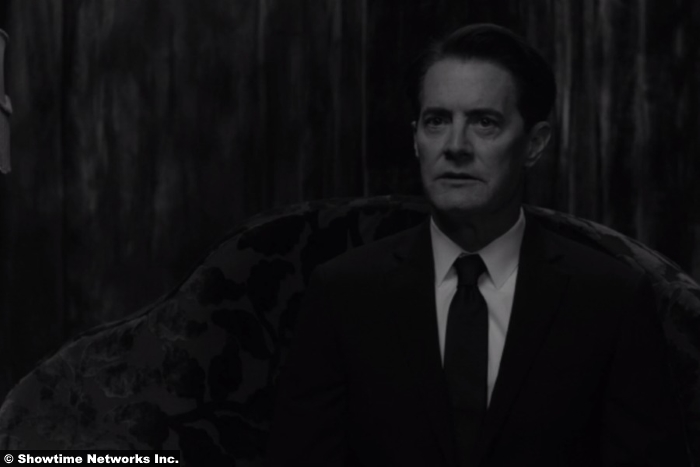 We begin back in black or rather, back in black and white in the Black Lodge. Poor Agent Dale Cooper (Kyle MacLachlan) is still stuck there. We join him already in progress in conversation with The Giant (Carel Struycken). He will meet up with most of our ol’ pals from the Lodge and its Red Room, except for the Man from Another Place, aka the Arm. Part of that probably has to do with the fact that Michael J. Anderson indirectly accused Lynch of some pretty vile crimes, including murder. Also, the MfAP did tell Cooper in the original run, “When you see me again, it won’t be me.” This time, the Arm is a brain? a neuron? a piece of ABC gum? that grew out of a tree. And the fact that I just wrote that sentence tells you that we’re in Lynch country.

And if Cooper’s in here in the Lodge, who’s out there in the world? Well, we don’t get to see all of our old friends yet, but we do check in with many of them. Benjamin Horne (Richard Beymer) still runs the Great Northern and his brother Jerry (David Patrick Kelly) is now in the weed business. We also get to visit with the Twin Peaks sheriff’s department. Unfortunately, Michael Ontkean has retired from acting, so there will be no Sheriff Harry S. Truman, but the legendary Robert Forster will be appearing as his brother Frank. We do get to check in with Lucy (Kimmy Robertson), Andy (Harry Goaz), and the wonderful Hawk (Michael Horse). It’s Hawk who gets a phone call from one of the most iconic Twin Peaks characters, Margaret Lanterman (Catherine Coulson), aka the Log Lady. Coulson was terminally ill when she filmed her scenes and it’ll break your heart to see her, especially when she tells Hawk, “I’m too weak to go with you.” She’s phoning because the log has a message for him, “Something is missing and you have to find it. It has to do with Special Agent Dale Cooper. The way you will find it has something to do with your heritage.” This sends Hawk on a mission into the woods, particularly around Glastonbury Grove, which old fans might know as the entrance to the Black Lodge. We and Hawk don’t make much progress there, but he does see the ghostly rippling of translucent red curtains behind the trees. 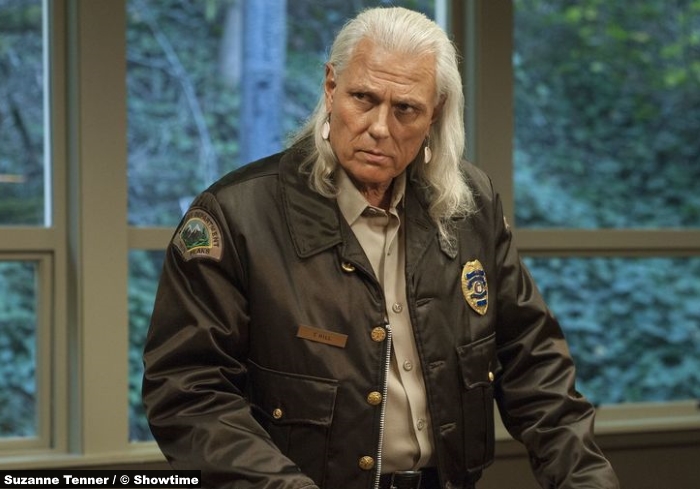 Elsewhere, there’s Dark Cooper, the agent’s doppelganger who escaped from the Black Lodge and is under the thrall of BOB. He does not want to go back into the Lodge, but he’ll have to if regular Cooper is going to escape. It seems like that may be underway, as regular Cooper is expelled from the Lodge. Where he finally ends up is unclear, but he does make an appearance in New York City in a strange apartment. The apartment features a big glass box that encases a portal. Sam Colby (Ben Rosenfield) is employed by a mysterious billionaire to watch over the box and file away the video recordings being made of it. As he tells his equally doomed love interest, he hasn’t seen anything in the box yet. Little do they know that like in a horror movie, all it takes for evil to show up is a little hanky panky. There’s been some question about what bodily fluid exactly was in last week’s episode of Fargo, but in this show and this scene, it’s definitely blood.

And speaking of blood, there’s also a subplot involving a gruesome double murder in South Dakota that might be the work of a seemingly clean-cut man, high school principal William Hastings (Matthew Lillard). If that last part seems familiar, see also: Leland Palmer (Ray Wise). As for the man himself, he appears in the Red Room imploring Cooper to help find Laura (Sheryl Lee), who also appears to speak to Cooper. She is dead and yet she lives and boy, is she mad about it. Her fury and horror shrieks her right out of the room. (The other member of the Palmer family, Sarah (Grace Zabriskie), is still in Twin Peaks and not doing great, judging by the overflowing ashtrays.) 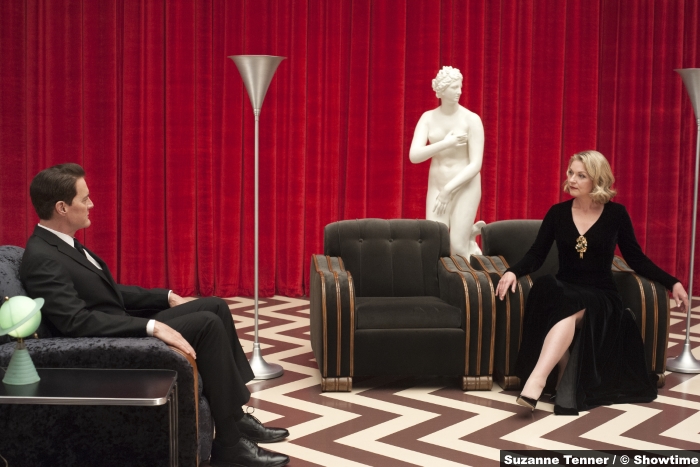 We end our visit to Twin Peaks by seeing two more familiar faces, Shelly (Mädchen Amick) and OG Lonely Boy James (James Marshall). In what may be the most surreal moment to date in this series, Shelly says, “James has always been cool.” WTF. Mr. Lynch, let’s not get that crazy.

9.5/10 – As Kevin pointed out last week, there have been a lot of TV shows and movies over the years that have clearly been trying to ape the Twin Peaks magic. But as the premiere episodes show us, there’s (still) nothing like the original.