The 10th season of “The Walking Dead” opened with exactly what you’d expect: some cool zombie kills, light philosophical rambling, and cameos of all our favorite characters. Few shows survive this long and while the irony of a show centered on survival having a long run isn’t lost on me, I still struggle to reconcile exactly what the 10th season is trying to do and whether or not it’s really worth doing.

The zombie genre has become tired. I say this as a die-hard fan who will watch pretty much anything with zombies in it. To pretend The Walking Dead wasn’t at the forefront of this resurgence would be idiotic. Fans of the graphic novels might not love the TV series getting all the glory, but the past decade of zombie flicks and spin-off shows owe their existence to the series. What concerns me, and should concern fans of The Walking Dead, is the lack of growth in the genre’s forerunner.

True zombie flicks are far and few between as the genre tries to move back to its more culture-critical origins. “Cargo”, the 2017 Martin Freeman vehicle, uses the zombie apocalypse to engage with mortality, parenthood, and the cycle of life. The zombies are there more as a plot device than anything else. “Ravenous”, the French-Canadian zombie masterpiece, plays with the nihilism and darkness inherent in a world gone mad. It’s violent, dark, and brilliantly paced. Leaning into the violence of the genre and the philosophy they’re playing with works perfectly. After watching this week’s episode of TWD, I’m concerned with the show’s continued lack of commitment to its angle. Is it slaughter and survival tension with a splash of morality or a meditation on humanity set in its waning. Fans of the show might want to call it both and I’d agree. How much longer it can survive being both, and whether both are really worth carrying on into the already-slated 11th season, is a harder question to answer.

The episode opens with Cailey Fleming (Judith Grimes) giving an eerie recap, tackling Season 9’s conflict with The Whisperers. Walker-mask wearing psychopaths armed with a metaphorical nuke (the horde they’re able to control), The Whisperers are set up to be this season’s antagonist as well. For all the tension around the post-storm borders and skin masks found near Oceanside, The Whisperers are surprisingly absent from the first episode of the season. Instead, we focus on Alexandria, Oceanside, and Carol and Daryl. The episode plays at meditation but has no shortage of kill cams and unnecessary horde appearances in its segments.

“Skin” centers on Michonne and Aaron, the latter struggling to make peace with Jesus’ death and the uneasy tension in Oceanside. After Aaron makes a risky move onto the bridge and Michonne saves him (surprisingly lacking the kill cam shots of the cold open) they argue about the morality of their group. Who are the good guys? What makes us the good guys? The answer falls about the same as it does every season when the question gets brought back up: they are, they are because they choose to be, and because the show writers are kind enough to make sure every other group they come across is just objectively horrible.

Aside from Judith’s retelling of Rick’s death as “The Brave Man”, “Skin” doesn’t do much on the emotional level. The acting remains outstanding and it’s hard to fault the cast here. Even though it’s her last season, Danai Gurira continues to carry every scene she’s in. Even when it’s just swinging her katana around, Michonne remains the centerpiece of the series. How they’ll transition her out and who, especially among the Oceanside cast, can carry the weight of the series has me nervous. Gurira confirmed her departure at Comic-Con and it’s hard to find fault in her reasoning. She deserves a richer role and showrunner Angela Kang is promising that in her final season.

“Bird Wisdom” gives us a glimpse at Alexandria. Eugene is obsessively measuring Siddiq and Rosita’s adorable baby, Negan has an armed-guard watching him pluck tomatoes, and Lydia struggles to read. We don’t get much. Negan and Gabriel’s conversation in the jail cell does tease out some possible conflict between Alexandria and Oceanside in the near future. Negan seems to be pushing Gabriel closer to a Machiavellian stance in harsh opposition to Michonne’s monologue at the end of “Skin”. Hopefully, we get a lot more of this as the season goes on because Siddiq’s PTSD flashbacks simply aren’t enough to carry the Alexandria plotline. 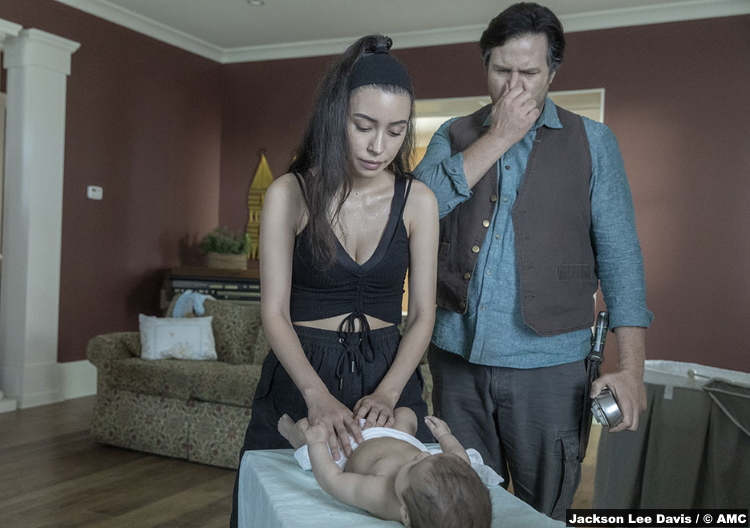 It’s in “Sea Dogs” that the episode finds its legs. Carol’s return from a fishing expedition and Daryl’s accented sign language manage to impact without an excessive exchange of redundant moral philosophy. Both Norman Reedus and Melissa McBride deserve every bit of praise they get for their performances here and more. After a joyride on Daryl’s bike, the two talk about friendship bracelets, making peace, and the value of running away. Carol is almost always out on fishing expeditions to avoid fighting and Daryl seems to hang back when he can. Neither are afraid to return to the fray, however, and we see the tension rise up between the friends when a deer crosses into Whisperer territory. 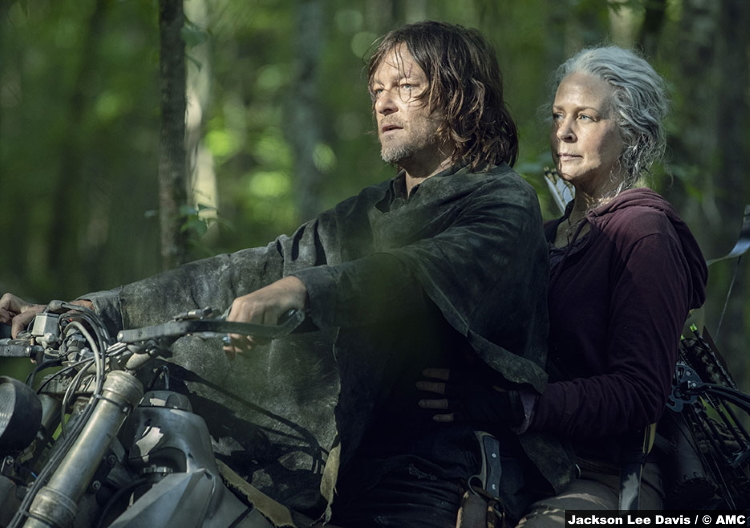 The openness of their relationship and the impressive acting of both Reedus and McBride closes out the episode as well. “Lines We Cross” and “Embers”, the last two segments of the episode, are really two halves of the same piece. The USSR satellite crashes near Oceanside and starts a forest fire. Giving the survivors a non-zombie enemy to face was a great call. Saturating the end of the episode with zombie kill shots and yet another inexplicable horde wandering in on them felt unnecessary. For an episode that spent so much time focusing on the human conflict of surviving and communities struggling to form their own identities, Michonne and Daryl slaughtering zombies in slow-mo with flames in the background was cool, but unnecessary. 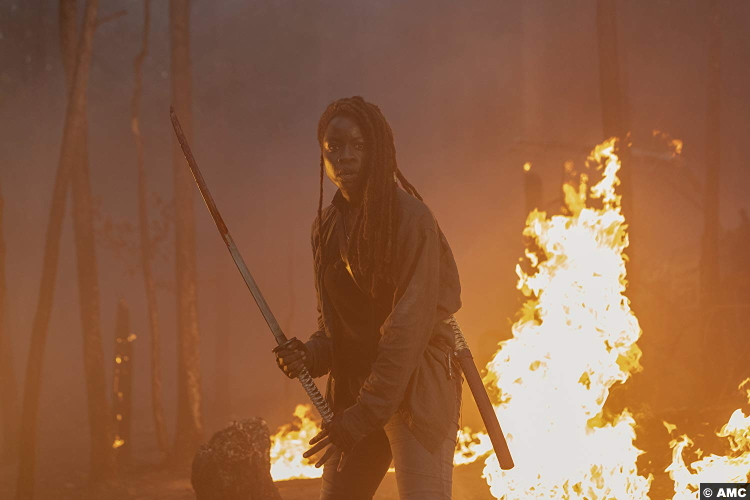 When all is said and done, Daryl and Carol head off and talk about leaving. Carol wants to go the next day, but Daryl threatens to “punch holes in all the boats” if she leaves. The moment is perfect and as Carol overlooks where we last saw the Whisperer’s horde, Alpha steps out, looks up at the defiant Carol, and now we know: the tension they spent the first half-hour of the show building has broken, retribution is coming, and Carol doesn’t seem likely to get back on the boat.

Overall, Season 10 has a lot of promise. The Whisperers aren’t a new enemy, but they are still largely unexplored. The philosophical differences between the survivor camps and the messy morality of the characters could be rich fodder for the season. Unfortunately, the first episode still shows signs of the writers’ indecision. After nine seasons of endless slaughter and “the humans are the real monsters”, how much more of that can we swallow? How much longer can kill cam shots make up for emotionless writing? How will the show survive when it’s best talent is planning to depart?

I’m hopeful this season will pick a side and commit. I’m not against “Assassin’s Creed” but with zombies or a deeply human and philosophical story with zombies forcing movement, but straddling the line between both is going to leave this season feeling painfully like an echo of what came before it. Adding in new characters can’t keep being the bandage for a writers room unwilling to settle on a storyline. For now? Carol and Alpha staring one another down over an empty cavern we know can be filled with walkers is enough to get me excited for next week!

7/10 – Solid execution of the formula with some hints of twists to come. A promising start to the season.