Star Trek Discovery has just one episode left in this second season and even though year two has lasted only a little over half the length of a season of TNG, DS9, or Voyager, it feels like it’s dragged on for twice as long as those old shows did each year. Thinking back, the first half (full review of season two coming later) reveals a storyline that had a lot of promise. I wasn’t crazy about the “where’s Spock” arc but the idea of a space-faring, time-traveling entity leaving markers across the galaxy is an intriguing one. The execution was half-baked but at least it was a good idea.

The good ideas have long run-out, it seems. 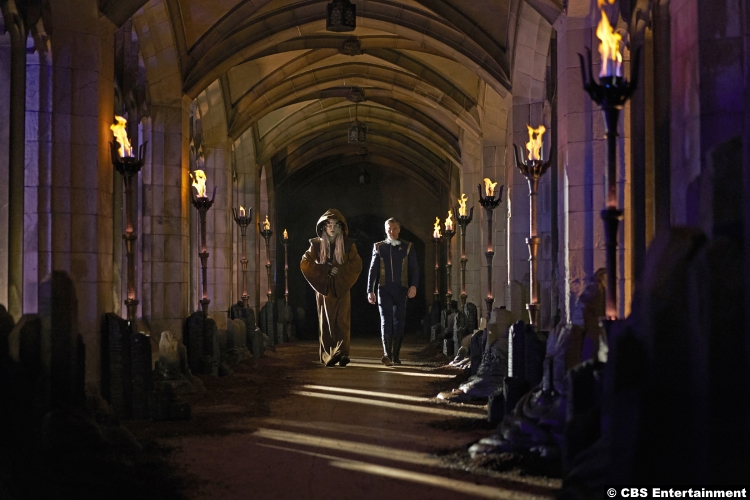 The way Discovery’s episodes often run together (with two exceptions: The Talos IV one and the one where they go to the religious planet that Frakes directed), people are going to have a hard time remembering what each individual episode actually offered. You can say “The Best of Both Worlds” and know what the episode featured. Same with “Balance of Terror” or even a garbage hour like “Threshold.” Discovery’s seasons will be remembered for whatever big moments—good or bad—stood out from week to week. This episode has one such moment: Pike sees his future and it horrifies him.

I look forward to the day when I have forgotten everything else about this episode and just remember that one detail because everything else was hot garbage. Michael has the B-Plot this week, as she explores the derelict Section 31 ship looking to do something or other with its computer before Control finds them or stops them or something. It’s a blur.

The whole subplot lacks an emotional tether or even a sound logical plot at the core. The season totally “lost the plot” after episode ten or so, when they—after spending weeks treating the “Red Angel” storyline and the “mysterious signals” as part of the same plot—decided that “Nah they don’t really relate.” Well, that’s a shame because now I don’t really care.

As for Pike, his one flash-forward moment was stark and powerful and really well acted but everything around it was cheesy, fantasy (not science-fiction) magic crystal garbage. And even Pike’s vision offered no value to the show. Pike didn’t grow because of it and we didn’t learn anything about him because of it (we literally have known that about him for fifty years). It was naked and pointless fan-service. That’s in contrast to the excellent Talos IV episode where the usage of Star Trek’s lore added to the story and made sense in the show’s context. More of that.

3/10 – Nothing redeemable apart from the cool looking sequence with Pike, which itself was ultimately pointless. 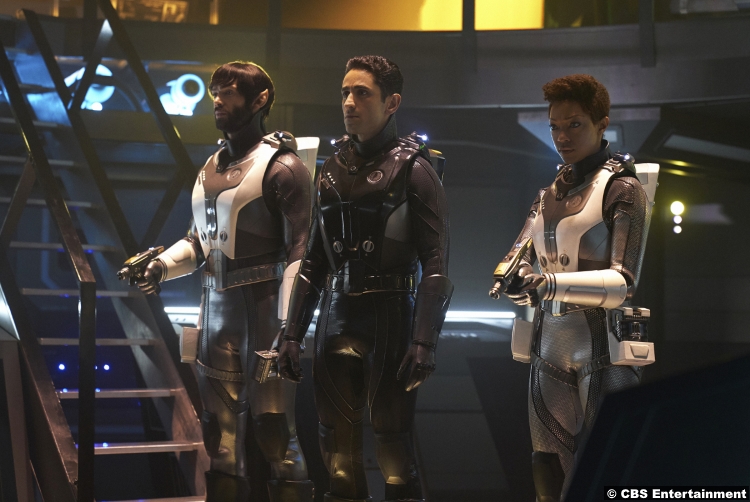 I wrote down this note not two minutes into the episode, swearsies: “If the data has to be kept out of Controls hands then blow up the ship. Picard would have done that. Just saying.”

The prospects of another Klingon episode (which used to be among my favorites on TNG and DS9; man do I miss Ronald D. Moore’s writing) made me hate this episode before it even fully begins.

Worf mentions Borath in The Way of the Warrior so that’s a reference I guess. That being said, Borath here seems to have a very different purpose than Borath by the time of DS9. I guess it’s not too much to think a monastery can change its priorities from “place where Final Fantasy Magic Crystals are grown” to “Church Camp.”

I do love the Disco-universe versions of old ships.  The new ships mostly suck but the Discovery (based on old Jefferies sketches), Enterprise, and the Klingon D7 are great.

Are we setting up Saru to be the next captain? Here’s the thing: I was all about that weeks ago but ever since he lost the one thing that made him interesting (his being a species with a prey mentality) it doesn’t appeal to me. The idea of a captain, being forced to make crucial and courageous decisions in the big chair while wrestling with the inherent “flee” nature of his species is sooo fascinating. And now that they’ve taken that away there’s no depth to him. He’s Pinocchio after he becomes a boy.

I needed an Advil after rolling my eyes so hard when the gatekeeper of Timey Wimey Land uttered a “Time will tell” pun. Because cheesy dad puns are exactly what I want from my Klingons.

I still think/hope Disco jumps to the post-Voyager future and that explains (somehow) why Spock never brings up Michael, why no one has heard of Discovery or its Spore Drive, etc. I would have just set the show in the future to start with, but oh well.

I appreciate the attempt to have the crew interact and show some personality over a shared-lunch. That’s all.

You may have missed it because the show’s director spent exactly zero seconds focusing on it, but they very casually and quickly revealed that Voq’s baby son is now all grown up after a few months due to Timey Wimey Shenanigans. Amazingly they didn’t even let him interact with his parents who were a quick beam-down away. The show amazes me in its ability to skip over the moments that need to breathe, and linger incessantly on the moments need to be cut or trimmed down.

While watching Michael in a dutch angle shooting a long tentacle hand monster that looked like a sci-fi channel original movie I just thought to myself “what even is this show?”

And then at the end of the episode, they finally decide to destroy the ship.  (I said it first.)

Everything has happened so fast, the plot has been so rushed with so many twists and swerves that, just as you start to grasp it, it changes focus all over again. There’s been no time to process it all. It makes the moment where they say “let’s blow up our ship” lack oomph and all the drama that follows lack sincerity. 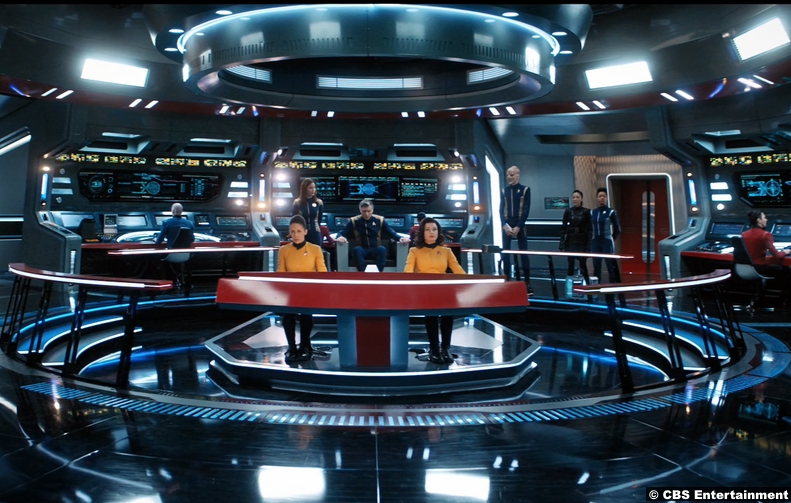 Why doesn’t Discovery just use the Spore Drive to jump to another galaxy or even to the barren nothingness of intergalactic space? Control wouldn’t be able to reach them. That would solve all their problems. I suppose Stamets would have to sacrifice himself to make the jump but at the very least you should have that conversation, wrestle with that moral dilemma, do something.

Discovery is afraid to be too nerdy. That’s its biggest problem. It masks shallow and barely-developed characters behind a too-fast pace, a constantly swerving plot line, and unearned melodrama.

The second season was supposed to run only thirteen episodes, but CBS bumped it to fourteen, splitting a two-hour finale into two, one-hour installments. That gives this episode an incomplete feel, even more so than many have. As a cliffhanger, it’s not Best of Both Worlds (one of TV’s best cliffhangers ever). It’s not even Time’s Arrow (which just sort of…stopped, with no real hook).

It’s hard to judge half an episode, which is what this is. My first reaction is to say it was a lot of filler: Big long crying scenes of people saying goodbye to Michael (again! we did this just a few weeks ago) which do nothing to me because (A) she’s the star of the show and isn’t leaving, and (B) the characters haven’t been developed enough for it to move me when they weep. It fails, therefore, on an internal and external level. 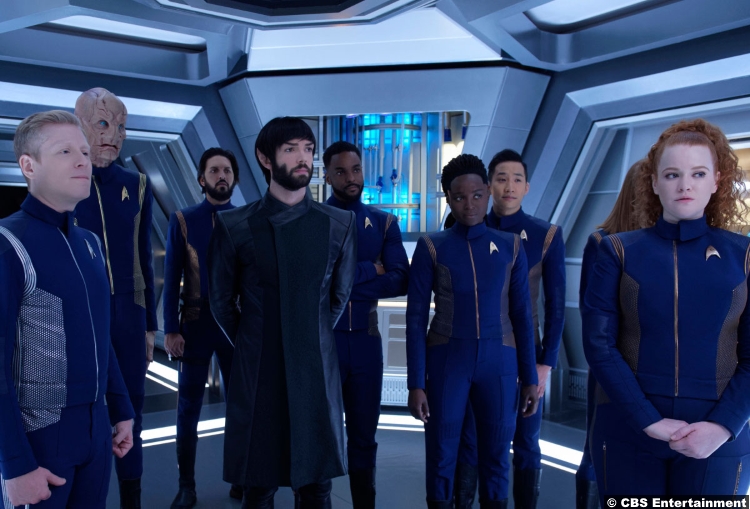 Why is DISCO so much larger than Enterprise when Enterprise is newer, better, etc? That bothers me.

You know what would have been cool? These long Personal Log monologues done by all the senior staff over the course of the first season. Might’ve helped us learn these people while everything around them was going warp 10.

I think we all saw that self destruct failure coming.

Still, though I must ask. If you cant destroy the ship why not just fly it into the sun?!

Even now as Michael says “send the ship into the future” I cringe. It’s what I’ve wanted from like episode one of season one. And now that they’re talking about it it’s just all so corny and dumb-sounding.

Now they’re talking about recrystallizing Dilithium.  I’m sure all of this will be retconned or timey wimied out of existence but it annoys me at the moment all the same. I mean all this was already settled in Star Trek IV!

Honestly, It’s a good thing CBS ran this show weekly instead of dropping it all at once. I’ll never watch this season again but if I did I know it would make even less sense when binge-watched.

Pike’s goodbye speech was good. Why? Because I believe he’s really leaving and he’s a character I have grown to love. Great acting, great character work. I want more. You could cancel Discovery right now and start up “Pike, Spock, Number One on the Enterprise” weekly adventure show and I would be all about it.

I am not all about Discovery.