As we celebrate fifty years of Star Trek, CultofWhatever is looking back on each of the shows and film franchises that defined the Final Frontier.

We’ve talked about the Original Series and how, when it was great, it embraced the sixties social revolution. On the other hand, when the Original Series stumbled, it slipped into every silly cliche that doomed science-fiction from that era. The Next Generation took a little bit to find its mojo, but when it did it managed to surpass the original by expanding the franchise’s horizons. Deep Space Nine followed soon after, and though it was the red-headed step-child of the brand, it dared to be different and was rewarded with loyal fans, many of whom regard it as the best of the bunch.

And now we come to Voyager. 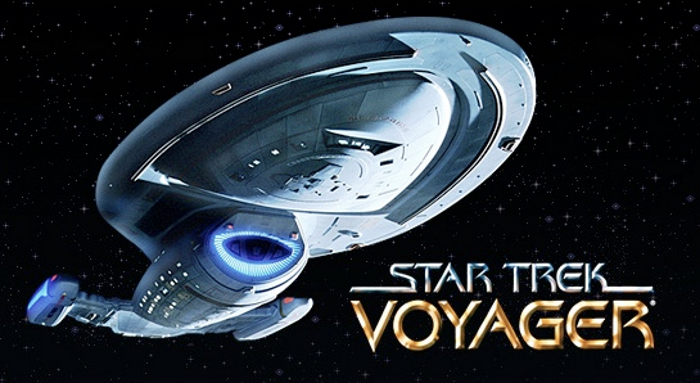 By the mid-90’s Star Trek was as big as it had ever been. Six movies had been completed, a few of which were big successes both with critics and ticket-buyers, the Original Series’ reruns were a regular mainstay on afternoon TV, Deep Space Nine was recently launched, giving the franchise two shows on TV at the same time (a first for first-run syndication), and the award-winning The Next Generation had just finished its sixth season. As far as fans were concerned there was no end in sight.

That’s probably how it felt to Paramount and Rick Berman too. Paramount was the parent company in charge of the franchise, and Berman was the man at the wheel (who had taken control of Star Trek officially after Gene Roddenberry passed away in 1991). For years Paramount had been trying to launch their own network and back in the 1970’s they almost did. Had they, the Paramount Television Service would have premiered in 1978 with its flagship show “Star Trek Phase II” launching alongside it. Plans fell through when not enough advertisers pledged money to support the new network. It didn’t help that Paramount’s original idea was to start with only one original show—Star Trek—and fill the rest of the airtime with movies of the week and infomercials.

Fast Forward almost twenty years and Paramount was ready to try again. FOX had broken into the network TV market a decade prior and (eventually) established itself as a popular alternative network. Paramount bought several independent TV stations across the country and in 1995 launched the United Paramount Network. The flagship show? Star Trek of course. It was the hottest property the company owned; why not Star Trek?

Rick Berman could see the writing on the wall with The Next Generation. The cast was getting older and more expensive, and the Original Crew was basically finished as movie stars. The next step for the crew of the Enterprise-D was to transition to feature films. That would have left Deep Space Nine as the sole Star Trek show on TV. DS9, however, was not the ratings juggernaut that TNG had become and Berman envisioned another Star Trek show that would continue the core concept behind TNG (namely, a ship in space, discovering a new adventure every week). The plans of Paramount meshed perfectly with the plans of Berman and Star Trek: Voyager began preproduction work during The Next Generation’s final season.

For the next seven years Voyager would be—along with WWF Smackdown—the two biggest shows on the network. For five of those years the show would be directly compared to its sister-show, DS9 (which was still airing in first-run syndication, while Voyager was exclusive to UPN). Whereas DS9 took the franchise in several new directions (partially thanks to how little Berman cared about it as he focused most of his energy on keep Voyager humming), the UPN Star Trek show was often criticized for playing things too safe and for stubbornly refusing to evolve beyond the Next Generation formula that was almost a decade old when Voyager launched.

It didn’t help that Voyager basically inherited two-thirds of the Next Generation writing staff, and more importantly, the TNG head writers (Michael Pillar and Jeri Taylor) both moved over to work on Voyager. Continuity and consistency were probably the words tossed around to explain the transition, but it came across as derivative. Plots for episodes often felt like rejected stories from their days working on The Next Generation. There wasn’t enough new blood in the mix to help the show find its own identity, and the people up top were too ingrained in “the way things are done” to really embrace much change anyway.

A wise man said “Experience is the greatest inhibitor of creativity and innovation, because you learn from experience what NOT to do.” Berman, Pillar and Taylor had lots of Star Trek experience, but by the time they applied it to Voyager, fans were ready for something new. 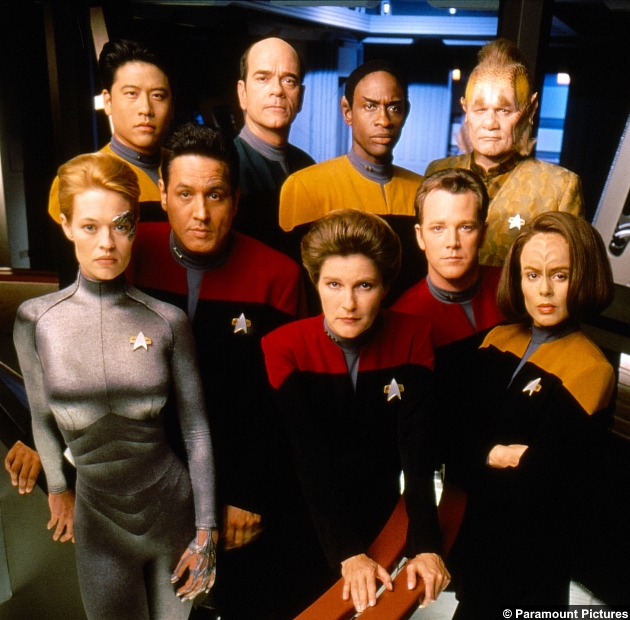 Instead, they got something “different.” It wasn’t a step up, it was a step sideways. The drapes were changed but the house was the same. A female captain, a black Vulcan, a half-klingon (woman!) engineer. The crew actually hearkened back to the Original Series in how it stereotyped the main cast. Just as the original crew had the token Asian, Russian, African-American, alien, Scotsman and country bumpkin, Voyager had its token Asian, woman, African-American, native-American, etc.  It worked when Roddenberry did it in the 60’s because it was a time of social upheaval and he was trying to say “in the future everyone gets along.”

By 1995 the future was here. Women weren’t just slaves to the kitchen, blacks weren’t disenfranchised with Jim Crow laws, Russians were no longer the country’s mortal enemy. The days of needing the token-whatever character should have been ended with the original series. The Next Generation was a show that aired in 1987 (eight years before Voyager) and it didn’t pander the way Voyager did with its cast.  Sure it had it’s “black guy engineer” and “Klingon in Starfleet” and “Android” characters, but they were allowed to evolve and develop personalities and quirks and “character” over the course of the show, making their race incidental.

After seven years Ensign Kim never moved beyond being “the Asian one who never got promoted.”

In fact, Kim is the perfect example to point to if you wanted to show how Voyager never evolved. The guy never got promoted! Lt. Paris was demoted and re-promoted in the span of the show, but Kim stayed an ensign the whole time. When Garrett Wang asked Berman why he was never getting what all other lower-ranked characters in Star Trek got, Berman just shrugged his shoulders and said “we have to have an ensign.”

After Star Trek DS9 ended a few of its writers were given the opportunity to work on Voyager. One of them was Ronald D. Moore, who had written some classic episodes of both TNG and DS9. He entered the Voyager writing team with the expectation that he would resume working with his old TNG writing partner Brannon Braga (together they had penned two TNG movies, including the beloved First Contact, and some of TNG’s best episodes). Moore had been promoted to co-Executive Producer on DS9 and Braga was a co-Executive Producer on Voyager but when Moore tried to put some of the ideas he learned on DS9 to good use (such as character development and story-progression over the course of episodes/seasons) he was shot down by Braga and Berman, who basically told him the DS9 way was not what Voyager was all about. Toward the end of his short stint as a Voyager writer, Moore expressed frustration that he was essentially having to pitch show ideas to Braga (who was supposed to be his equal as a team member, and who was certainly his inferior as a writing talent).

Moore only contributed to a couple episodes (one of which was Barge of the Dead, probably the best B’Elanna episode in the whole show) before walking away in frustration. A few years later he would develop the reimagined Battlestar Galactica for the Sci-Fi network, using many of the ideas he wanted to see Voyager explore but which Berman refused to consider (a ship that decays over the years, genuine conflict between the people, resource scarcity, multi-episode plots and arcs). BSG went on to win countless awards (including the coveted Hugo Award) and is hailed as one of the best science-fiction shows of all time.

Voyager remains the show that “could have been.”

By the end of its run, few of the characters were even being explored anymore. Chakotay, the first officer of the ship, became a character of less and less importance as the show progressed. The aforementioned Kim had his aforementioned promotion-snub, Tuvok was a static character, Neelix too. By the end of it, only three characters were positioned by the writers as important: Cpt. Janeway, Seven of Nine and The Doctor. To be fair, The Doctor is one of the best characters in all of Star Trek (thanks in large part to the brilliance of Robert Picardo), Seven was a very unique character (a detached Borg) and Janeway was the top-billed captain of the show. It’s just sad that so little effort was put into the whole rest of the crew.

Even one of the two core concepts of the show was fizzled out by the end of the second season. Originally Voyager was to be about (1) a starship, lost in the far-reaches of space, trying to get home, while (2) housing a mixture of rigid, by the book, Starfleet officers and roughian, scrappy, outlaw Marquis. The natural possibility for tension and conflict was teased in the opening season, but by the end of the second everyone was fine with everyone else. Other than a slight variant in their rank-insignia, you’d never know this wasn’t a whole crew of rigid, by the book, Starfleet officers. Maybe because that’s all Taylor, Braga, and co. knew how to write. Or maybe that’s because it was all Berman allowed them to write.

Either way, for seven years the show tried to be “TNG, part two,” but rarely did the charm, originality, spontaneity and simple fun of The Next Generation find its way to Voyager. A few episodes stand out, however. If I was to recommend any Voyager episodes, I would recommend the three on the following page. They perfectly encapsulate what made the show good, when it was good…