The previous two episodes of Discovery offered a back-to-back pair of “good” shows, which was a legit accomplishment for a series that has been up and down for most of this season. Having two good ones in a row was a potential corner-turning moment. Now that two more are in the books, we’re able to evaluate whether or not the show actually did turn the corner or if it’s just two steps forward, one step back… 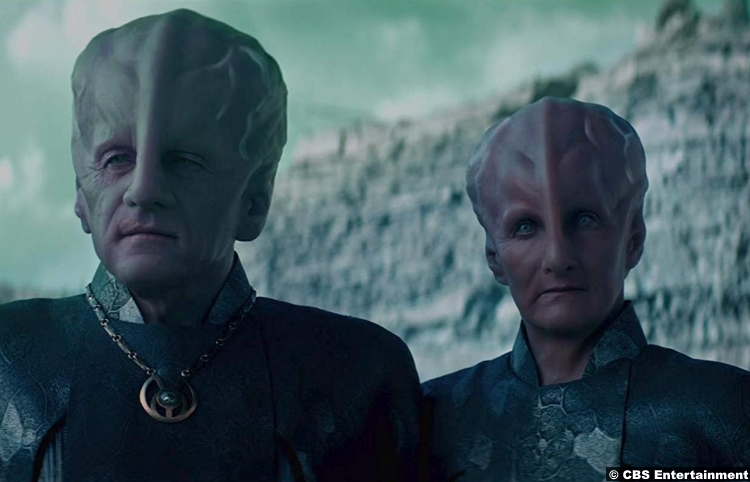 A lot of things went right with this episode. It wasn’t perfect; there were some moments that really failed to land with me, but overall I loved it and appreciate the way it wove Star Trek’s past and present together in a way that didn’t feel contrived, shallow, out of context, or completely beside the point. Basically, everything that Star Trek Into Darkness did wrong, this episode did right. Of the two main storylines, the one featuring Talos IV was the standout. Everything worked here; the presentation was stellar, with the planet looking like a modern-version of an old TOS-era backlot set. The Talosian design was evocative of the original but, again, modernized with just enough flair to work on a 2019 show. Their role in the story worked as well, with there being an organic and in-story explanation for going there in the first place. It was fan service, sure, but it was logical: Spock needed to be fixed and he couldn’t trust any Starfleet or Vulcan location not to rat him out.

The other story featured Dr. Culber trying to work through the obvious PTSD he’s developed post-resurrection. I appreciate the idea more than the execution, however. The biggest problem is—and this has been Discovery’s most constant problem—I don’t know Culber well enough to be moved by his story. If this had happened to Saru or Michael or Pike, or even Stamets, it’d be easier for me to get into it. On paper, I get everything they’re trying to do, including Culber’s problem with Ash Tyler being on board, but nothing is resonating with me because (A) I don’t know Culber’s character, and (B) I don’t like Ash’s character. 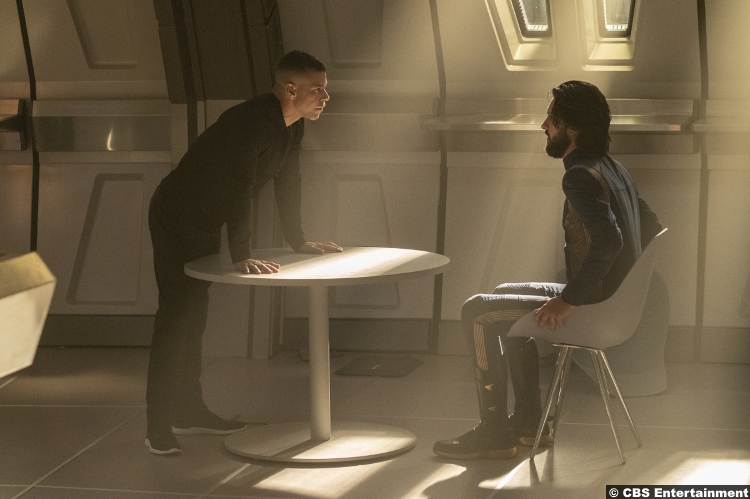 Problems with the B-story aside, the A-story shined. If Discovery is going to be a prequel, it’s going to have to handle running into old-Trek concepts. If they handle them all as deftly as they handled the Talosians and the tie-in with “The Cage,” I’ll be very happy.

9/10 – A great way to connect this show with Star Trek’s history. Well done.

What an awesome opening. Retro and relevant all at once.

I’m still not a fan of Section 31. The concept never should have lived beyond DS9. Its usage there was perfect, restrained, significant to that plot, but it fails to work when viewed as part of the greater Trek mythos. The fact that they run around with their own ships, rules and logos defeats the purpose of the organization entirely. They’re also obviously evil and yet no one seems to notice it.

Once again, everything about the trip to Talos IV worked perfectly. Right off the bat, we’re shown a black hole that’s actually just a mind game to hide the planet. So clever.

If I have a complaint with it, it’s related to Michael’s dialogue, which isn’t so much about Talos IV as it is the writing of the series in general. There’s too much exposition. Too many “ahh of course” monologues by characters. Too many “he knew____” and “oh so that’s why______ because _____” speeches.

Robolady acting as a spy would be more effective if we’d been allowed to get to know her character before now. Think about how incredibly effective Battlestar Galactica was. There’s a show that had actual spies and sleeper agents, but because everyone on the show had well-developed characters, every betrayal and reveal landed like a megaton bomb. On Discovery they don’t land at all; we just shrug and move on.

The fight between Ash and Culber was a perfectly reasonable thing to happen, considering the circumstances. Saru telling everyone to let them fight was utter bollocks, as was his flimsy reasoning. Circumstances or not these are officers. They both should have been pulled apart and thrown in a brig, and if you don’t want to do that but you still want them to fight, you have them do it somewhere private. Bad writing.

On Discovery’s version of Spock: He suffers from the same problem Zachary Quinto had with the character. It’s the same problem the Enterprise series had with the Vulcan race: No one seems to “get” Spock the way Leonard Nimoy did. The original Spock was…brighter. He could be condescending, yes, but it was always a bit playful. He never came off as bitter. This Spock is too frustrated. Too angsty. Too much on the verge of exploding. Maybe you can handwave the difference as “this Spock is younger and going through something traumatic right now.” I’ll give it time to see where it goes.

Just once I want a Starship captain and his senior staff to go rogue and for a Junior Officer to say “what? No, I didn’t sign up for this! I have my whole career ahead of me!” 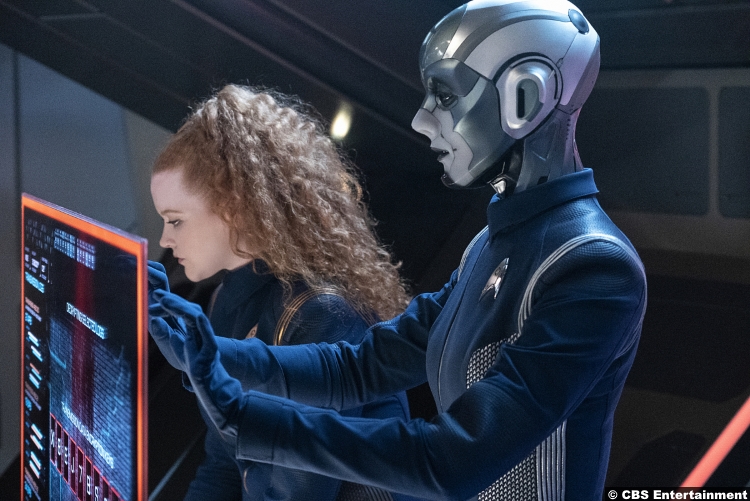 A lot happened. A lot was learned. Yet everything happened so fast (action and explanations) I will probably need two or three more viewings to grasp it fully, not to mention I’ll probably have to wait another month before it all can make sense (whether or not it will is another matter entirely). Ariam was given the spotlight this week; that’s the name of robolady and finally, I have learned it without having to google it. Naturally, they killed her, making all their efforts to give her personality and connection with me worthless. Her being hacked, being forced against her will to do an evil thing, and then having to die for it (being killed by her friends on her request) is a great storyline…on paper.

It fails to land here because I don’t know this person. I didn’t even know until this episode what she even was. Robot? Android? Alien? Turns out she’s a human(oid) with cybernetic augmentations. We’re shown glimpses of her interactions with the crew, namely Tilly, borg eyebrow lady, and the other one…I think her name is Ouachita? Everyone is all weepy over her death but I’m just blinking and chewing gum and waiting for the next scene to kick in. Hard to feel for someone in death that you’ve never felt for in life. 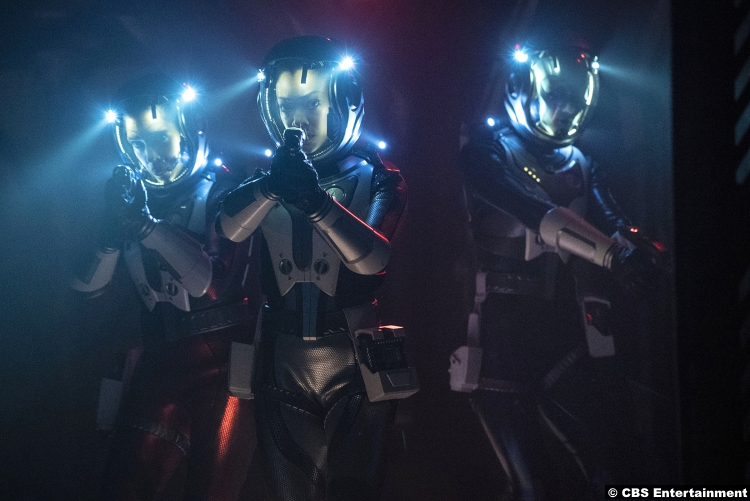 And that’s basically the crux of the episode; it lives or dies based on Ariam, and since I don’t know Ariam, the episode failed to do anything for me. We’re given a huge revelation about the nature of the Big Bad that the Red Angel seems to be trying to stop, but it all happened too fast and probably will need three or four more episodes before it’s totally unraveled so it means nothing to me at this time.

It’s always nice when Johnathan Frakes directs because, even when he doesn’t have much to work with, he at least knows that these crazy plots need some time to breathe; he understands that characters need to talk these things out. Frakes is a patient director, no rushing through things. This episode was still rushed but, in the wrong hands, it could have scored a lot lower.

Case in point for Frakes’ great contributions: The episode’s opening clearly established the premise of the hour, set the stakes, and then set us off. Tight and efficient. Just what you’d expect from “Two-takes Frakes.”

Admiral Whatshername brings back a mantra from last season that I’d hoped had died last season: “It’s okay to give up our values in the name of security.” A statement like that is begging for a good, Star Trekian philosophical debate. And, of course, in the end, the debate would conclude that no, we should NOT sacrifice values for any reason, most especially for selfish “survival” purposes. The problem here, like last year, is that the bad philosophy is given a pass and is almost treated like the right philosophy. That’s not Trek. Trek would never condone throwing away principles in the interest of self-preservation. I can rattle off a dozen episodes from TOS until Enterprise where the exact opposite is preached, and rightly so.

How the heck does Spock know about Stamets and Hugh’s relationship? He’s been on the ship for a day and a half.

How did Tilly even get the idea that Ariam had broke bad?! She just suddenly knew to suspect her after not suspecting her at all before. Weird and rushed plot development. I blame the writer.

The Ariam vs Michael fight was mostly good but the weird Matrix-like slow-mo thing was terribly out of place. I will let it slide, however, because Michael busted out the Kirk Maneuver, double chopping her trapezoids.

As for the episode’s big revelation about the season’s Big Bad. Let me see if I have this right…

So, a few weeks ago Disco comes into contact with a giant space sphere thing, which has been gathering intel on galactic life for a long freaking time. Disco brings that bad boy on board and downloads the history of the world part one into their computers.

Later, Disco sends a shuttle into a crazy timey-wimey space anomaly. While there, a probe from the future latches onto the shuttle. The probe hacks Ariam.

Ariam goes to Section 31’s HQ (Disco is there on the orders of Admiral Whatshername) and begins downloading the space sphere’s info into the HQ computer (a special AI called “Control”).

The conclusion that everyone reached as a result is that: Control sent a probe from the future to get that info so that it can evolve and destroy all sentient life in the galaxy…and it somehow knew that Admiral Whatshername would send Ariam there? I guess of course it did; it’s from the future. It knew she would be there…but didn’t know she ends up failing to send more than 25% of the data? What?

Now I assume the fact that this opens a queen-mother of a temporal paradox is just going to be ignored, as happens with 99% of time travel stories in fiction, but is that basically what we were told this episode? Right? “Control in the future” came back from the future to take over robolady so she could give “Control in the present” the tools needed to become wicked smart in the future and destroy everything?

Me personally, I’d prefer something simpler, like saving the whales or rescuing Data’s severed head from Mark Twain.