Star Trek Discovery S01E15: Season one finale ends with a bang…and not much else

We have to start with that last shot.

As Discovery warped (yes warped) to Vulcan, with Sarek in tow, they picked up a garbled distress signal from a nearby Federation ship. The registry flashed NCC-17…and everyone knew what it was. Of course it was. There can be one hundred ships whose registry number begin with 17– but there’s only one ship that counts.

Sure enough, the call came from Cpt. Pike, whom any old school Trek fan ought to know was the second captain of the Starship Enterprise (after Robert April and before James T. Kirk). And then we see her, the Enterprise. She’s not quite as plain-grey as you may remember her, there’s a little more pizazz to her, but she’s not as remade as in the JJ Abrams movies, and she’s not the refit version (the ultimate ship design, imo) from the original films either. She’s the classic 1960’s model only updated enough to fit into the Discovery style…you might even say she looks right at home in Discovery’s universe, but we’ll come back to that.

For a season that made its bones throwing out big twists and shocking turns, Discovery saved its final wow-moment for something very predictable in hindsight, and ultimately the most simple and easy bit of fan-service they could do in a show set in this era. I’m actually impressed that the writers showed the restraint to wait for the last shot of the whole season to reveal the old Constitution Class beauty.

Take away that beautiful little moment at the end of the episode, however. It’s a teaser for season two and nothing more. The other forty-four minutes of this forty-five minute episode had the task of wrapping up season one. How did it do?

I have two primary complaints but let’s just focus on one; the other will be expounded in the full-season one review later. To put it simply, Discovery’s final episode of the year suffered for being flat-out boring…when it wasn’t getting the basic principles of Star Trek so fundamentally wrong I had to pause and compose myself more than once.

It was an episode were things happened…but nothing happened. It’s hard for a season finale to stick the landing on serialized shows, I know that. Breaking Bad and Battlestar Galactica were masters of it. “Kobol’s Last Gleaming” and “Gliding Over All” are 1 and 1A for me. Star Trek of old never had a year’s worth of storylines to payoff in the final hour. They could just do a really great forty-five minutes, end on a great cliffhanger and let the fans go nuts waiting to see what comes next. Old Trek finales were about looking ahead.

New Trek has to look back. It has fourteen prior episodes of story all building to this moment, and despite the plethora of soft-resets the show has had along the way (I count six story-resets this season: Michael changing ships and going from first officer to convict, the tardigrade storyline coming and going, the jump from Klingon War story to Mirror Universe story, the reveal of Lorca’s origin which totally recontextualizes his character, the return of Philippa in the form of her mirror version who becomes captain, and now in this episode the very abrupt end of the suddenly-important again Klingon war), there have been several plot strands linking all the past episodes. Episode Fifteen—the finale—has to tie the loose ends together and tell a satisfying hour-long story, and tease the future.

They teased the future and they basically checked the boxes they needed to check to tie the loose ends up (things happened), but the story told before the tease, the story that did the tying of those loose ends, was as generic, bland, and uneventful as could be. 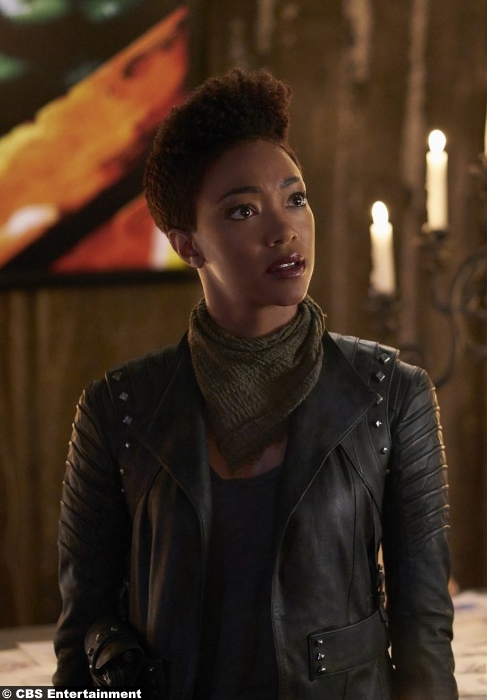 The opening teaser establishes the theme of this episode: Michael vs Philippa…or more precisely Michael vs an immoral and ideal-abandoning Federation willing not only to work with a Terran Empire warlord but give her command of a Starship and send her to nuke a planet. Does that sound like Starfleet to you? I know the conflict allows Michael to give a big, grandiose speech about “Federation values” and she’s right on, but it doesn’t change the fact that the mission Michael opposes was ordered by Starfleet. It shouldn’t take a commander-ranked, ex-con mutineer to put admirals in their place and remind them that WE’RE NOT SUPPOSED TO GO AROUND NUKING PLANETS!

I mean MY GOSH did you HEAR Admiral Lisp Lady’s argument?

“We were losing the war, we had to do something.”

I’m going to type this very slowly because I want to get it right and because it highlights not only what makes Star Trek so attractive and so unique among other sci-fi shows, but also illustrates (by contrast) what has persistently irked me about Discovery…

Starfleet was Gene Roddenberry’s in-show conduit, to show the viewers of the Star Trek TV-show what kind of a future we could have, if we stopped being so selfish. The idea of bombing each other into the stone age under the guise of self-preservation and the (very subjective) “greater good” is EXACTLY THE..hold on I’m gonna switch to big font again

IT IS EXACTLY THE KIND OF 1960’S COLD WAR STUFF RODDENBERRY WAS ARGUING AGAINST WHEN HE MADE STAR TREK!

And here we see Starfleet using that logic to justify their actions.

For an episode that—plot-wise—was incredibly boring and uneventful, that realization (that Starfleet as Discovery’s writers have made it, is exactly what Gene Roddenberry was writing against in 1967) elicited the biggest emotional reaction of the whole season: And it was a reaction of profound sadness.

So while I appreciate Michael and co. giving the speech they did and standing up for what is right, it doesn’t change the fact that Starfleet was wrong. And they’re supposed to be the virtuous guys you look up to; they’re the ideal you strive for.

This bizarro, immoral Starfleet philosophy is reinforced when you try to put the entire Lorca story in some kind of seasonal-context. Basically the evil, sadistic Lorca, while posing as a Starfleet captain, was winning the Klingon war, and the moment he left (first back to the mirror universe and then to death) Starfleet started losing the War. So what is Starfleet’s solution? They go out of their way to recruit another mirror universe character; they seek out another evil, sadistic person to help them win the war. Because winning, even if it means throwing away your principles, is all that matters. 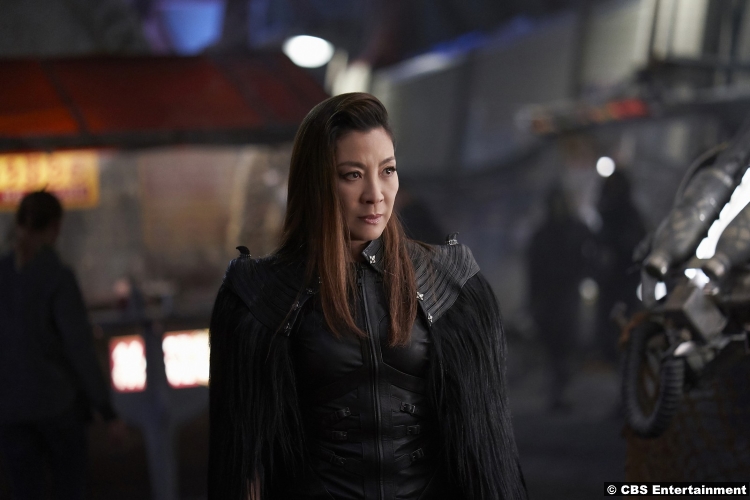 If that’s seems like Star Trek to you, then you and I have different understandings of Star Trek.

And what’s doubly-sad to me, is it seems like no one in the Discovery writer’s room has any desire to use the show to debate these philosophical questions. Is Star Trek no longer a show where issues get discussed? I’ve said before my favorite all-time episodes are The Original Series’ “A Taste of Armageddon” and TNG’s “The Measure of a Man.” Those episodes debated ethics and philosophy. Phaser beams and technobabble is all just window-dressing. Star Trek is supposed to be above that stuff, using it only as a change of pace or as a pallet cleanser after a long, philosophical discussion about callously fighting a war without regard for death (A Taste of Armageddon) or about the sanctity of life in all its forms (The Measure of a Man).

Discovery has no interest in discussing the philosophical merits of “doing evil in the name of good” even though that’s such a timely topic worth discussing under the cover of a sci-fi setting (and what is sci-fi for, anyway, if not to debate the issues of the present under a backdrop of the fantastic and/or futuristic?). It would rather show space gigolos in g-strings and…well I was going to say phaser fights but there weren’t any in this episode where nothing of substance actually happened.

Discovery’s first season ends with another twist being abruptly cast aside (Philippa is captain!…except no she’s not anymore), to make room for another another twist (hey look, the Enterprise!), stringing the audience along, hoping they won’t notice that the morality at the center of the show—and the willingness to debate and defend that morality—is the antithesis of what the Great Bird of the Galaxy once envisioned. 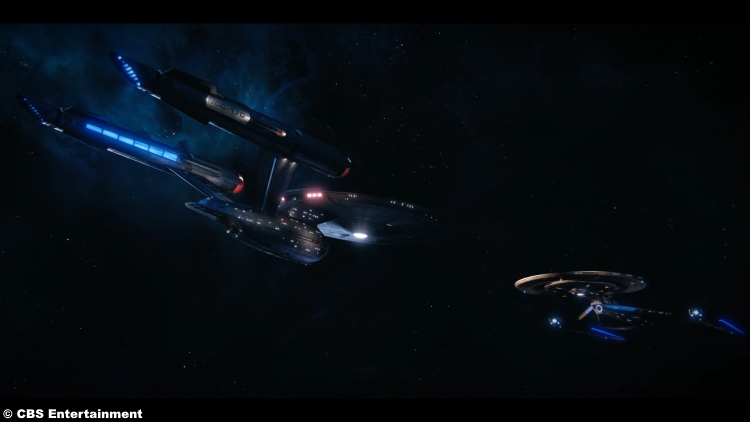 Final Episode Rating: 1/10 – with one point given entirely for that pretty last shot with the Enterprise, which, when stripped from all prior context, is a whale of a great moment. The rest was either boring or so sad I don’t even want to think about it.

(I hold out hope that Discovery’s normal universe is actually another alternate one, and that the real Star Trek and the real Federation is out there somewhere).