Generations ended up being a critical and financial disappointment. The film was only able to exceed the box office output of The Undiscovered Country by a million dollars (despite a slightly larger budget and much more spent on advertising). It finished its run grossing about 150 million dollars, which was good for about 5th out of 7th for the franchise. It wasn’t the bomb that The Final Frontier was, but Paramount’s hopes that the new crew would move the franchise to a new level of success was not achieved.

As previously discussed, the problem with Generations was the fact that Paramount was too invested in seeing it succeed. They hovered over the production like a helicopter parent, second-guessing every decision and adding their own unhelpful suggestions for what should be done to make the movie a hit. Surprisingly, when it failed they resisted the urge to do what most studios do in that situation: They didn’t blame everyone else. On the contrary, they brought Braga and Moore back to write another one, despite both men believing their one chance had been squandered. They allowed Rick Berman to remain the top creative producer and they doubled-down on the Next Generation cast. The biggest change on the production side of things was the hiring of Johnathan Frakes to direct, but again their commitment to doing Star Trek right was seen here: They could have turned things over to a big name movie director but instead gave the reins to the co-star of the show. 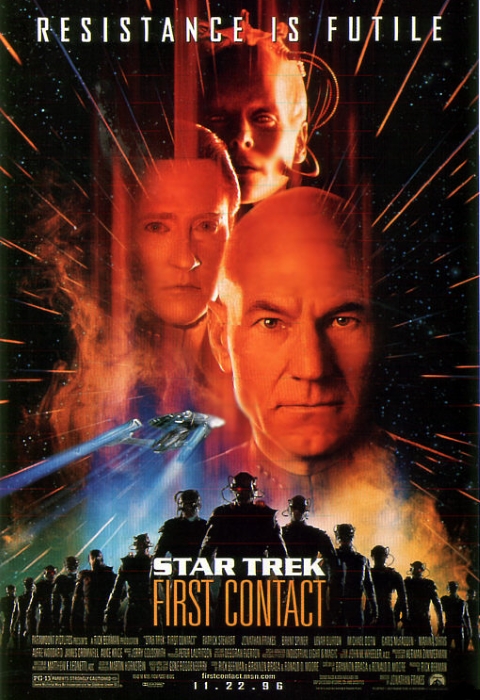 To that point Frakes was known almost entirely by his portrayal of Commander Riker. He had directed several TNG and DS9 episodes and was already starting to take offers to direct other TV shows, but his established reputation was as an actor, not a director. Still, he lobbied hard for the chance to direct, promising to bring a familiar touch to the production as well as move the story to a direction that could excite the mainstream audience (who largely ignored Generations). Frakes got the job and he—along with Braga and Moore—were basically only given one edict by the studio: Make a hit.

To accomplish that goal, producer Rick Berman decided to go back to the well that had produced many great Star Trek hits: Time Travel. It had been the basis for the biggest Trek movie (The Voyage Home) as well as many acclaimed episodes from all previous series. At the same time Moore and Braga were mulling over an idea to bring the Borg to the big screen. The Borg had been the closest thing (apart from Q) that TNG had to a recurring villain, having made appearances in each season of the show after they were introduced. Frakes liked the idea of the Borg as well, as it would allow him to play around with some horror movie tropes that he thought would bring a fresh take to the franchise. Berman decided to combine his and the writers’ ideas and thus, with all of the principal players in agreement, the production was already off to a better start than Generations. Paramount was so giddy they approved the largest Trek film budget since The Motion Picture.

It’s easy to look back on the film, see how nearly perfect it was (but for a few plot holes) and wonder how they could have done anything else, but in fact the initial screenplay would have been a disaster. Truth be told, even before a single word was written, the whole thing was almost ruined by Rick Berman. His idea of a “time travel movie” meant that the Enterprise would go back to the Renaissance era to prevent the Borg from destroying the dawn of modern history. Can you imagine Picard and Worf dressed like this 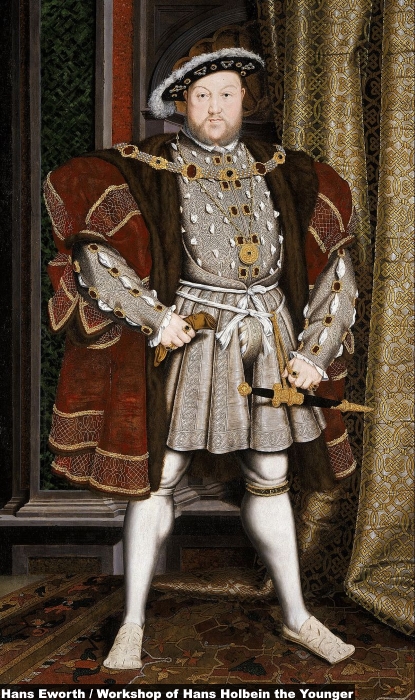 and the movie making bank?

The climax would have seen the Enterprise crew storming a castle that had been taken over by the Borg, with the crew wielding swords and bows instead of phasers and bat’leths. A side story would have focused on Data being Leonardo DaVinci’s apprentice…an idea that would be recycled for an episode of Star Trek Voyager. Thankfully smarter people intervened.

Patrick Stewart refused to wear tights. That killed the idea. 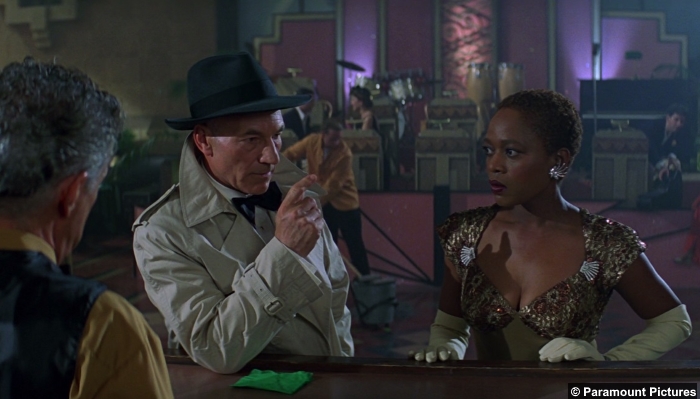 Moore and Braga’s original draft, however, was all wrong: The writers originally conceived a story that would have taken Picard out of most of the action, placing him on earth and putting Riker on the Enterprise to battle the Borg. In the first draft, the Borg would have killed all the scientists (led by Zephram Cochrane) on earth who had been working on the warp-capable spacecraft. The action would have turned to the Enterprise where Riker would have led a team to take them out while Picard stayed on earth, taking Cochrane’s place and completing the historic Warp Flight himself. 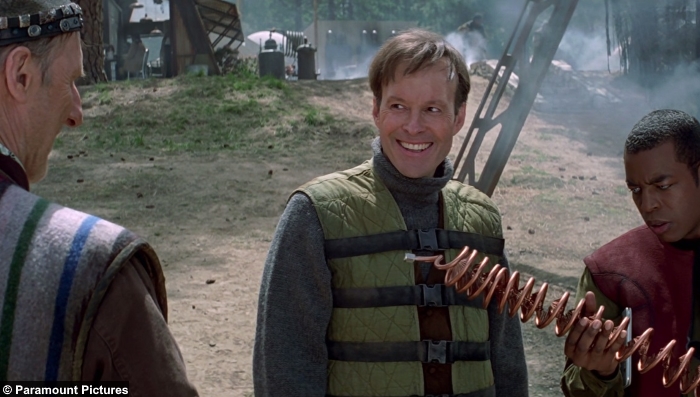 That’s a novel idea but it relegated the action of the movie to the second-in-command, while the less exciting parts were done by the star (Stewart). The biggest problem was the fact that Picard, who has more of a history with the Borg than any other human, spends most of his time totally removed from them. So, a switch was made: Riker went to earth, Picard picked up a phaser rifle (Stewart apparently relished the chance to play an action movie star) and the film found its groove. 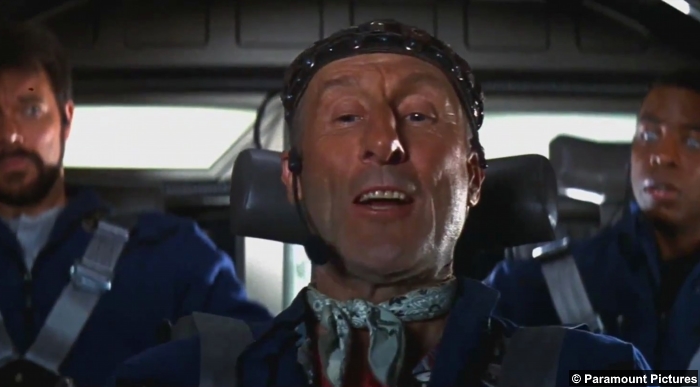 Once the right pieces were in their right places, everything else clicked. The Borg Queen was a natural character to create, making her the avatar of the collective, and the obligatory “Data subplot” was easily integrated, with the Queen attempting to seduce him away from his loyalty to Picard. 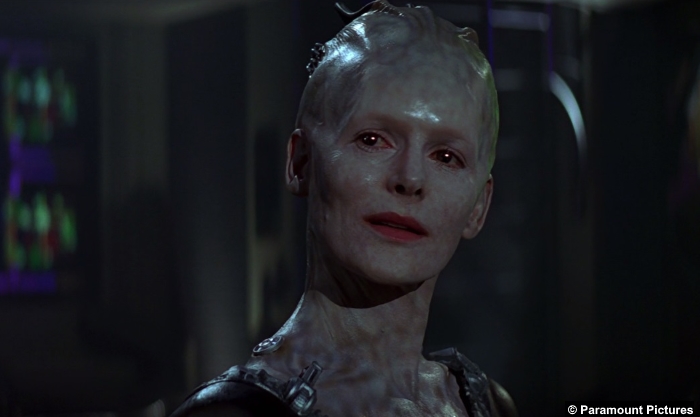 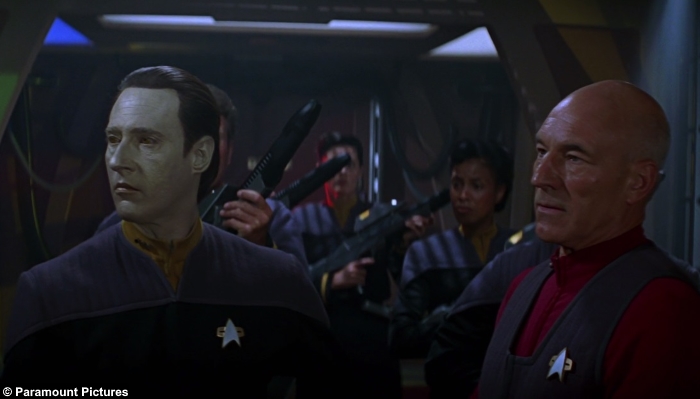 Frakes used his bigger budget to plan out some big action scenes; most notable was the upside-down sequence on the Enterprise’s deflector dish. But Frakes’ real compliment to the movie was his willingness to take chances where someone like David Carson (director of Generations) played it safe. Dolly zooms, dutch angles and other camera tricks were basically forbidden on the Trek shows by Rick Berman, who favored a cookie-cutter look that made every episode look the same (so that, his thinking was, new viewers would find any episode instantly accessible). Instead, Frakes used all the tricks in the book, including giving the Borg Queen an overt sexuality that really hadn’t been touched before on Star Trek.

When the film opened, backed by a strong marketing campaign (it premiered alongside the franchise’s 30th anniversary), it grossed 30 million dollars in its first three days. In comparison, Generations grossed only 23 million in the same time frame. In fact, First Contact boasted the best opening weekend of any Trek film to that point. Its final box office tally of 92 million (domestic) made for second-best in the series (again, to that point). Critics loved it, causal fans loved it, hardcore fans loved it. It was exactly what Paramount needed it to be to keep the momentum of the franchise from sagging: It was a hit.

So what happened with Insurrection?