Last year, Discovery had a hit-and-miss debut season. The show’s biggest problem coming into the second season was the enormity of secondary characters with no personality or motivation, as well as an unfocused storyline that had too many ideas and not enough discipline.

A minor complaint in addition to those was how fast everything moved. Star Trek, more than any other science fiction show, needs to take its time and exhale. It needs to stop and let its wondrous discoveries breathe, let the characters discuss (and sometimes debate) them, and let the audience understand them, before flipping the table in the final fifteen minutes and wrapping things up.

Even if you want to do a serialized show, with each episode only telling a portion of the larger story of the season, you still need each episode to have the proper building-blocks of a good story, namely a beginning, middle, and ending. Each episode needs to be about something or you’re watching nothing. Discovery, weirdly, had a first season that was about too many things while each individual episode (with two or three exceptions) was about nothing in particular.

Season two is out and I’m left feeling as hollow as I did at the end of the first season. 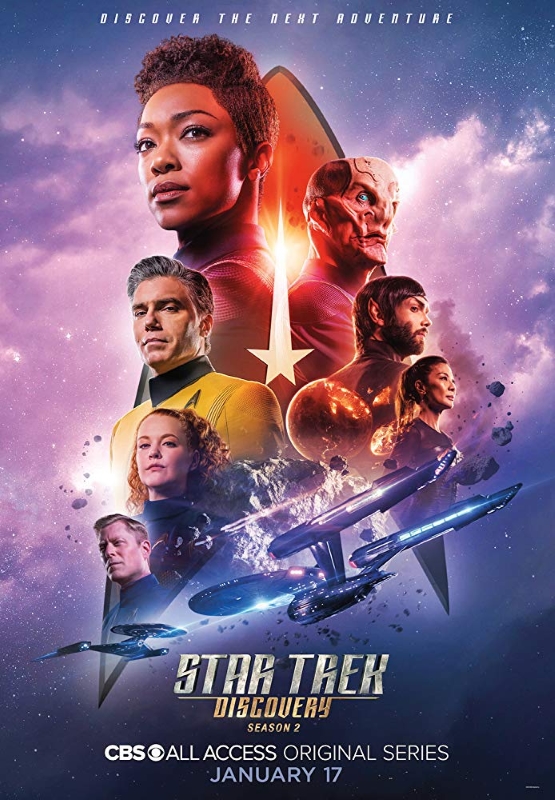 If there’s any overall praise to give, it’s that it feels (as much as seeing 1/14th of a season can reveal) as though the creators have settled down and hammered out a single overarching storyline for this season. Last year, the departure of Bryan Fuller no doubt caused a lot of chaos behind the scenes, not to mention robbed the show of one of Trek’s best creative voices, going back twenty years. In his wake was a slew of voices all offering input for what the show should be and where the season should go. There were too many cooks in the kitchen and the show suffered for it.

This year, the kinks seem to have been straightened out and, after one only episode, I am confident that at least we’ll have a consistent season of Discovery. Will it be consistently good? That’s another question. After only one episode, and with a very serialized season ahead, it’s impossible to know for sure, but my guess would be…nah. It’ll probably okay, but probably won’t be great.

I’m willing to be wrong, however. 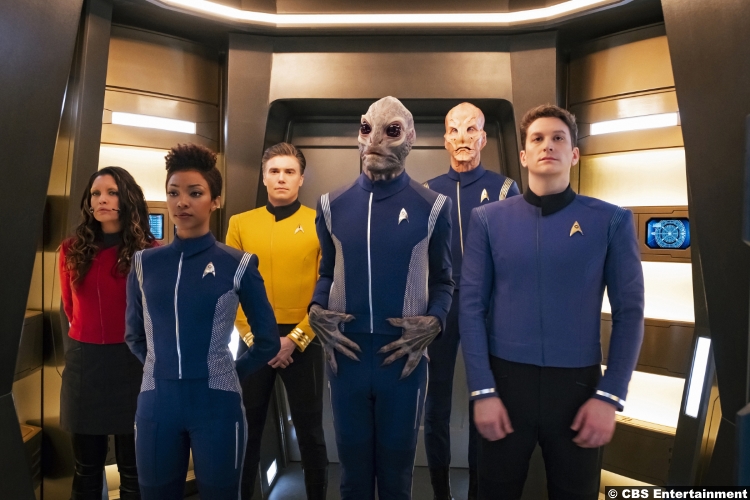 The opening was tense and hurried but there seemed to be a conscientious effort to make the rest of the bridge crew more developed. I applaud the effort; time will tell if they do any more than just shout their names (that I forgot thirty seconds later). Will there be a Geordi/Data friendship among them? Is there a Riker/Troi thing that we don’t yet know about? Is someone going to explain what that robot thing is, if not an android (and it better not be an android)? Are they just going to continue being people who say “aye sir” but who never have lives away from the bridge, like some sci-fi version of the Bechdel test?

The intro is probably the only radically different thing on the show that I love. It might even be the thing in the show I love the most.

While everyone stood around and spent way too many words talking about the seven mysterious signals and how it points to something big, etc, all I could think of was the line from The Motion Picture where Kirk said to McCoy “There’s a thing out there…” and Bones replies “why is every object we don’t understand always called a thing?” The old writers had a way of getting the point across in short, witty ways, without bogging things down talking in circles about whatever it is they’re talking too much about. Sigh.

Is “Number One” captaining the Enterprise as of now? Does no one find it weird that Pike just up and leaves his ship to go be Discovery’s skipper for a year, just because the Enterprise is “badly damaged?” Can you imagine Kirk just saying “welp, see you guys next year!”

Tilly is still the most fun character on the show precisely because she (A) has a distinct personality, (B) is a well-acted character, and (C) has grown as a character over the course of the show. Has anyone else grown or developed? I know in the old Star Trek shows character development was nill. Sulu was Sulu from day one until the day the Excelsior flew off into the sunset. But this is a serialized show. This is a modern take on Star Trek. That’s what CBS keeps telling me…so where’s my character development? Stamets is sad that Dr. Culber died, so sad he’s prepared to leave his work on Discovery behind, but then he changes his mind…why? Characters on this show either are static (Michael) or they jump from decision to decision without reason.

Pike is interesting. He’s aloof, informal, but also seems impetuous. I can’t tell if the writers are trying to make him “cool” or if he’s just supposed to be the opposite of Lorca. Time will tell… 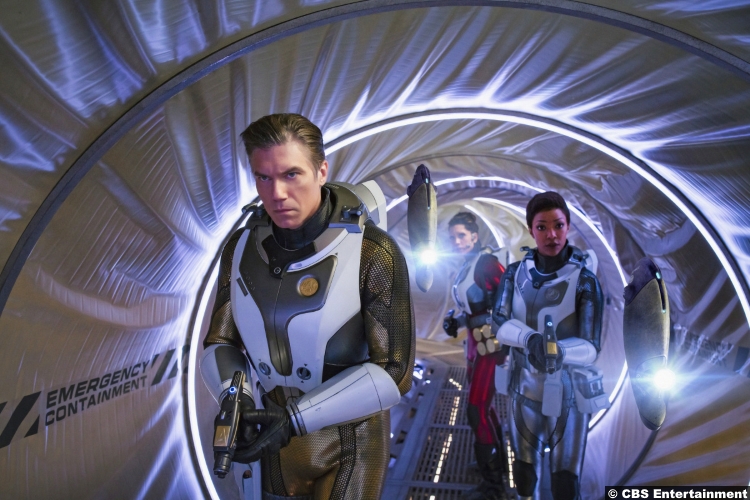 Speaking of “time will well,” that’s really the biggest takeaway from this episode. Nothing is really learned. This felt more like the prologue to a thirteen chapter book than the first story in a fourteen chapter adventure. Things happen, and fast, but as with the first season, there’s very little “there” there. Nothing is given time to breathe or develop.

Case in point is the science officer with a chip on his shoulder. He’s a jerk to Michael the whole episode, leading me to think “he must have suffered some kind of a loss in last season’s war, for which he blames Michael.” I expected some, you know, character development on that front. But nope, he’s thumped without any real relevance to the plot. He might as well have been wearing red.

And when the show does slow down, such as in the scene between Michael and Sarek, there’s very little progress made, either between the characters or in advance of the plot. If two people talk for ten minutes and (A) no one grows, or (B) the story isn’t advanced, you just wasted ten minutes.

And that’s the danger with serialized shows. They need strong writing in the character department to keep you engaged while the plot is delivered piecemeal. Minutes were at a premium in the old Trek shows. You only had 40 minutes to tell a complete story, so you had to make every line of dialogue count. That’s also why the old Trek shows had those episodes that focused solely on Data, or on Tuvok, or on Odo. They allowed the audience to get to know that character so that, in another episode, they could contribute to the story without you saying “who is this again?” The dialogue in the old shows explored the problem of the episode, debated it philosophically or morally, and worked out a solution accordingly. The old shows’ episodes were simple but deep. You could explain the overall plot in one sentence, but to watch it you’d come away having…well, discovered something.

In this show, characters talk about nothing for ten minutes, shoot something for five, blow stuff up for fifteen, rinse and repeat. Everything is fast. Observe the scene when Michael tells Tilly about the rock that she couldn’t transport so they need to find another way to get it on the ship. Suddenly it’s hurry go fast run we’re running out of time!!!! There’s no time to breathe or contemplate or think out the problem. 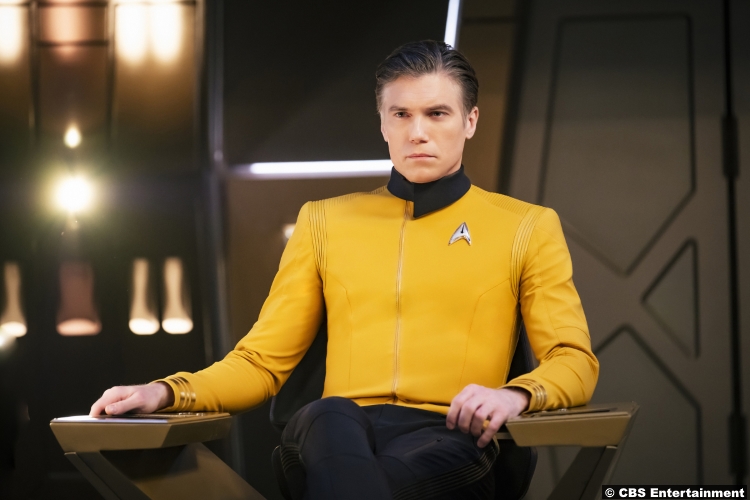 Stupid CBS AA commercials are stupid and I hate them. But even then, if you insist on asking fans to pay for this AND STILL give them commercials, then at least space them out accordingly. This episode had two in a thirty-second span, ruining the flow of a critical moment. Is CBS trying to get fans to pirate the show?

There’s also a horrible editing/continuity issue toward the end of the episode. In one scene, Pike rises from the captain’s chair and tells Saru “my mission is done, the ship is yours again.” In like the VERY NEXT SCENE Michael is in the captain’s ready room, where Pike is suddenly the permanent captain. There’s a middle scene between those two that shouldn’t have been cut.

Maybe cut a commercial and add that scene in next time, mkay?

7/10 – Despite my complaints, there’s nothing horribly offensive about the episode or the show in general. There’s just nothing great, and nothing even good enough to make the complaints less annoying. It’s a barely-cromulent episode of a barely-cromulent show that happens to be called Star Trek.