Elvis is the king, transcendent above other singers, actors or otherwise-entertainers.

As fellow Memphian and legendary musician B.B. King quipped, “Elvis is worth more dead than he was when he was alive.” Today, in the fortieth year since his death, his life and legacy remain a source of great interest to longtime fans as well as neophytes. A look back on his history as a musician, an actor, and just as a man pulled in every direction by the rapid winds of fame, is proper on this anniversary year.

You can read the previous installments in this series here:

PART THREE: OUT OF SIGHT 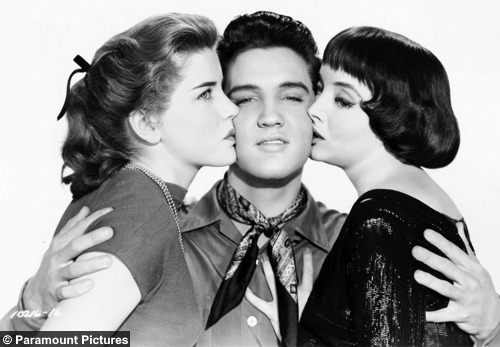 Elvis’s meteoric rise from 1954-1957 saw him transform from a nobody truck driver in Memphis, Tennessee to an international entertainment sensation. As he celebrated Christmas in 1957, Elvis was riding a string of successful singles, albums, TV appearances and motion pictures. Arguably no other individual had his “product” so widely and varyingly consumed. His face was everywhere, his records were constantly being spun by DJs, his movies were smash hits, his TV appearances shattered ratings records. Typically this is where the phrase “nowhere to go but down” is tossed out, but were it not for one little hiccup, his career might’ve continued climbing ever higher.

His first single of the year went straight to #1, and though he didn’t release an LP in 1958, each of his first four albums continued to sell well; even his Christmas album was a steady seller well into Spring. His lone film for the year brought him his first critical acclaim as an actor (which he had long coveted). But again, the achievements and accolades he enjoyed in 1958 have to be considered with an asterisk.

Five days before Christmas, 1957, Elvis received his official notice that he was being drafted into the Army. Immediately, Paramount Pictures appealed for a delay in his enlistment since Elvis was about to shoot the movie King Creole. The Army granted a two-month deferment, allowing Elvis time to star in his final film of the 1950s.

Originally, producer Hal Wallis secured the rights to “A Stone for Danny Fisher” as a vehicle for James Dean. After the movie rebel died in 1955 the film sat in limbo until Wallis signed a ten-picture deal with Elvis Presley. By 1958 they had already made the tremendously successful musical-comedy Loving You, and would go on to develop similar big hits like G.I. Blues and Blue Hawaii. Elvis’s followup to Jailhouse Rock, however, was not indented to be a musical-comedy. Both Wallis and Presley were eager to make the film a dramatic showcase.

He never outright said it in interviews, but privately Elvis was ready and eager to leave the recording studio for the movie studio and pursue his true dream of being an actor. When the offer came to star in A Stone for Danny Fisher (the title had not yet changed to King Creole), Elvis saw it as his chance to solidify himself as a leading man. And what better way to do it than to take over the staring role originally planned for his Hollywood idol? Being drafted threw all of those long-term plans in the air, however, and Elvis would instead (according to associate Eddie Fadal) spend the entire shoot working on the assumption that his career was likely finished and that he’d be a forgotten man when he returned from the Army.

In the meantime, he sank his teeth into the role of Danny Fisher, memorizing—as he had done during the Jailhouse Rock shoot—every word of the script (not just his own parts) and insisting on additional takes to get his performance perfect. It wasn’t Shakespeare, but it wasn’t Spinout either. In the end, the critics that had dismissed him in Love Me Tender and mocked his silliness in Loving You and Jailhouse Rock finally gave kudos to the dedicated performer. The role is still regarded as the best work of his career. The film scored with the public too, ending the year as a top-five film according to Variety.

The soundtrack was equally as impressive, with all selections taken from the movie (as opposed to the “Loving You” album where half the record featured studio cuts), giving the album a cohesive feel. The New Orleans flavor—especially the bluesy trumpet—make the tunes stand out significantly from prior records, giving it an almost “concept album” feel. The title track is a perfect rock and roll opener, but it’s the neo-R&B-sounding “Trouble” that really stands out.

Curiously, the album only features eleven songs, as opposed to the then-standard twelve. Originally ten songs were recorded in January, but a month later two more were finished, but only one was added to the LP. The one that was included was “Steadfast Loyal and True,” a throwaway by hit-makers Lieber and Stoller, perhaps due to a contract requiring the number of their songs to be included. But why not also include the inspired blues song “Danny,” with its far-better vocal performance? The song went unreleased until a compilation album 1978 and demonstrates a singer at the top of his game.

The album was released in September, to coincide with the premiere of the movie. By this time Elvis was well into his Army career, and could not enjoy its #2 peak on the US charts (#1 in the UK). The singer was also dealing with a personal tragedy at the time, one which would affect him for the rest of his life.

In early August, Elvis’s mother Gladys was rushed to the hospital, suffering from hepatitis. Her condition rapidly deteriorated and Elvis was granted emergency leave to visit her at the Methodist Hospital in Memphis. Two days later she died of heart failure, being only 46 years old. The forever-young singer had always been closest to his mother, more so than his dad, manager, or any other adviser or friend. His mother was the solid rock from which he built his success. He thought of her as his guiding light and moral compass. When accusations of lewdness and indecency first came to the hip-shaking singer, Elvis’s first reaction was to say “I would not do anything on stage that I won’t do in front of my own mama.” Her death ripped the carpet out from under him. All the sudden changes in his life—from the sudden success to the Army and everything in between—happened with her providing reassuring familiarity. Now he would have to go through the rest of life’s trials alone, and that feeling of sudden abandonment never left him until his own tragic death.

Four years later Elvis would co-write a song (one of the very few he ever personally worked on) in tribute to her, entitled “That’s Someone You Never Forget.”

The whirlwind of 1958 didn’t stop with personal tragedy or sudden changes of address: Soon after his mother’s death, Elvis was back in service, RCA was busy prepping and releasing songs and Paramount was readying the premiere of King Creole. Elvis’s first single of 1958 was a holdover from the previous year’s recording session. “Don’t” was a powerful Lieber/Stoller ballad, backed by “I Beg of You,” a catchy pop tune. The latter is a lot of fun while the former was meant to make the girls swoon. It worked: “Don’t” went straight to #1, his tenth single to do so.

The song demonstrates the range of Elvis’s voice and his demand not to be seen as simply as a “loud rock and roll guy.” Lieber and Stoller also produced the record, marking their fifth time working with Elvis in that capacity. Their partnership was clearly fruitful, with multiple #1 singles, EPs and LPs credited in part to their work behind Elvis’s microphone. Wanting to capitalize on the success, the duo offered Elvis (not his manager Tom Parker, mind you) a partnership deal. Whether Elvis even considered it or not is impossible to determine. He almost always deferred to Tom Parker on business matters, preferring not to get mixed up in paperwork and legal issues. Either way, his manager rejected the offer outright, largely because the deal would have given the songwriters greater control over the songs Elvis would sing, which would mean a diminished influence Parker had over Presley’s career.

Parker limited Lieber and Stoller’s input from that point forward. Though they still wrote songs for Elvis, they never produced another of his records after “Don’t.” A few years later, the “Colonel” sent them a new contract to sign, featuring a blank page and a line on the bottom for their signatures. When they called Parker’s office, assuming there had been a mistake, they were told the details of the contract would be filled in later. Stoller then told Parker what he could go do with himself and vowed never to work for “that jerk” again.