After finding its footing, Star Trek TNG was the best thing going

Almost twenty years after The Original Series was cancelled, Gene Roddenberry was able to parlay the success of the Star Trek movies (which, despite being marketed as action films, explored themes of the acceptance of aging and death, environmentalism, and the stubbornness of soldiers to let go of a war) into a new TV series. Dubbed “The Next Generation” Star Trek was reborn in a style more similar to Roddenberry’s original pilot “The Cage” than the remade “Where No Man has Gone Before.”

This new Star Trek had a captain who was the kind of man to stand still and think before coming to a reasoned course of action, whereas Kirk was more of a “think while running because your first idea—punching—only angered the big brutish alien” kind of guy. Cpt. Picard was also, strikingly, bald, in what is probably the most meta difference between he and William Shatner’s Cpt. Kirk. This captain, unlike Kirk, wasn’t afraid to show the chrome dome.

But really, the differences in the Original Series and The Next Generation come from the eras in which the shows were produced. The Original Series was filmed while the late-60’s social revolution was occurring. Its actors were largely progressive, but still came from an older generation, where certain things just simply were a certain way. Star Trek was a TV trail-blazer, but it had to hide those intentions behind a thick “sci-fi action” veil. The Next Generation certainly had it’s sci-fi cheese, but it—being on the other side of the 60’s social revolution—was able to be more open and frank in its social commentary.

It didn’t start out with a bang the way the Original Series did, however. Early TNG episodes are hard to get into. In fact, if the show hadn’t been a first-run syndication program (meaning the producers sold the show directly to TV stations, and not a network), it likely would have been cancelled after its second season. Looking back on the show as a whole it’s easy to mark the moment when the show “got good” as fans think of it. It was around the time the cast stopped wearing onesie pajamas with low necklines and started wearing something that more resembled a uniform. It was also around this time—season three—that the show finally found some continuity in the writers room.

Despite a few stand out episodes early on (one of which will be highlighted below), the show didn’t really find its stride until it found Michael Pillar. Pillar joined TNG in its third season as a writer but halfway through the season he was promoted to showrunner, which meant he would be the creative voice behind the direction of the whole writers room. There was still Rick Berman overseeing things, and his role continued to expand as Gene Roddenberry’s health failed him, but the voice of TNG was definitely Pillar’s.

Speaking of Roddenberry, his diminished influence over the show as it went on directly correlates to the uptick in quality of the show. Roddenberry was a great visionary mind whose big picture idea of Star Trek can’t be disputed. But that said, his ideas on the micro level were…hit and miss. The much-maligned first Star Trek movie is entirely his baby, while the universally praised Star Trek II was almost disavowed by Roddenberry, whose rejected idea for the movie would have seen the crew of the Enterprise go back in time to Dallas 1963 in a plot revolving around JFK’s assassination. His fingerprints are all over the first two seasons of The Next Generation but less so starting with season three (again, right as the show started getting good).

Eventually Star Trek would begin to run on fumes (Voyager, Enterprise, Nemesis) but there was a time when the creative juices were flowing and Star Trek-post Roddenberry was must see sci-fi TV. When it comes to The Next Generation there are three episodes that stand out which highlight how the spinoff was able to stand on its own as great television…

MEASURE OF A MAN 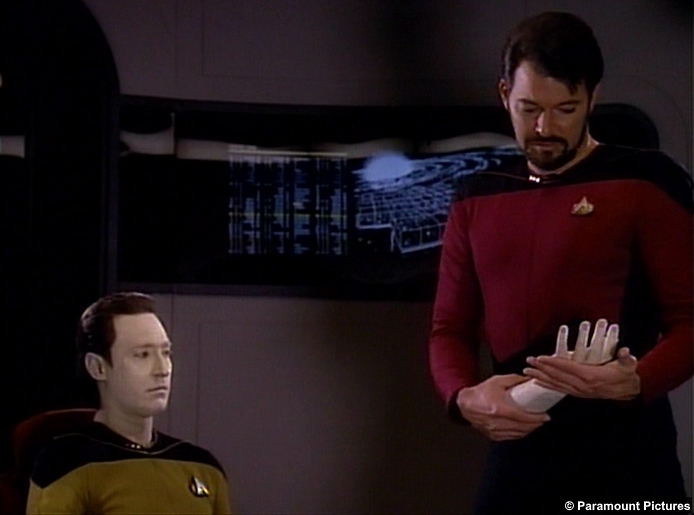 Even though this was a pre-season three episode (only the ninth episode of season two, to be exact), it offered the promise of what TNG could be, and what the show would eventually be known for: Brilliant social commentary. Measure of a Man, essentially, explores the nature of human rights, and whether or not those rights should be passed on to human-like beings, in this case, an android. The plot is very basic: A Starfleet scientist and engineer—Bruce Maddox—comes aboard the Enterprise intending to take Data (by force) for experimentation, in order to clone his hardware and “put a Data on every starship in the fleet.” Data is skeptical of Maddox’ research and doesn’t believe he has the knowhow just yet to duplicate him. Data fears if he becomes a guinea pig it could mean an accidental death on the operating table. He respectfully declines Maddox’ initial-friendly offer. In response Maddox declares that Data, as an android, has no rights and is the property of Starfleet to do with as it pleases. A hearing is called by Cpt. Picard to determine if Data does in fact have human rights.

What follows is a courtroom drama, not the first one Star Trek has ever done and certainly not the last, but in this case it is one of the sharpest and tensest courtroom drama in the franchise’s history. Cmdr. Riker is drafted by the prosecution to argue that Data has no rights. Johnathan Frakes delivers some of his best acting work, showing his conflict in doing his duty while also remaining Data’s friend. The nature of Data’s existence is debated and even though the outcome should not have been in doubt, the show did a brilliant job explaining how and why Data should be viewed as a being with rights. Star Trek is at its best when it forces the viewer to think and debate a social conundrum and this episode stands alongside the very best TV show episodes to explore the human condition.

THE BEST OF BOTH WORLDS 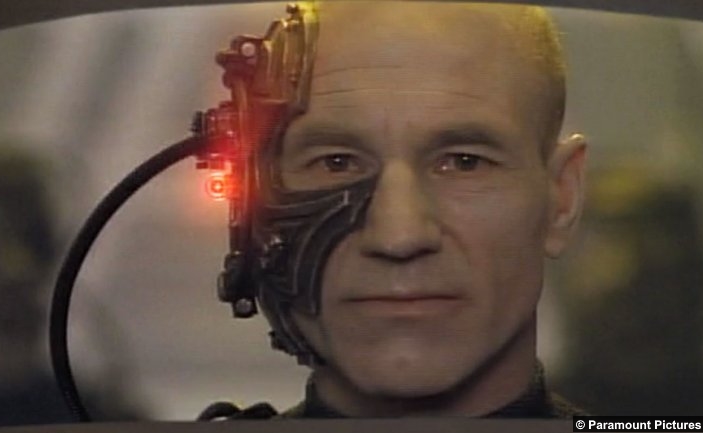 This two-parter comprises the third season finale and the fourth season premier. And although the second part does a good job wrapping up the plot and tying all the loose ends together, it is part one that stands among the best science fiction television ever. This episode is gripping, weighty, tension soaked, action packed, and sporting a cliffhanger that every Star Trek season from every Star Trek show since has tried to duplicate (to no success). The plot revolves around the Borg, the cybernetic-human hybrid species introduced in the previous season. The Borg seek to “assimilate” organic lifeforms in order to expand their collective knowledge and consciousness. They encountered the Enterprise when Q flung the starship to the far reaches of space—far beyond the limits of Starfleet’s exploration. Afterward Q returned the Enterprise back to their corner of space, but within just a year, the Borg—intrigued by the humans they encountered—made their way to the Alpha Quadrant with the intent to assimilate all of humanity.

The real hook of the episode comes near the end when the Borg attack the Enterprise and kidnap Captain Picard, but its the tense half-hour leading up to that point that makes the episode so great. The Borg encounter the Enterprise and demand that Picard surrender himself. When he refuses the two ships engage in a short firefight (in which the Enterprises is clearly outmatched). The good guys escape only thanks to some quick thinking by guest-star Lt. Commander Shelby (who spends the episode trying to push Riker out the door to take his place as first officer of the ship). While hiding in a nebula the Enterprise crew develop a device they hope will be powerful enough to destroy the Borg ship and all aboard it. Eventually though the Enterprise is captured, Picard is kidnapped and at the end of the episode he is revealed as Locutus of Borg, a half-Borg, half-Picard hybrid who demands the surrender (for assimilation) of the entire crew. The music swells as the camera zooms in close on acting-captain Riker, who calls for Lt. Worf to fire the Borg-destroying weapon.

Those final words (“Mr. Worf…fire.”) are accompanied by an imposing music cue, a fade to black and the dreaded “to be continued” flashing on the screen. It was very rare for TV shows to have cliffhangers that stretched across whole seasons. Star Trek may not have been the first to do it, but it did it most famously, and even took home multiple Emmy’s for its production. The Best of Both Worlds stands among the very best of Star Trek, especially part one, and shows how versatile the franchise can be. 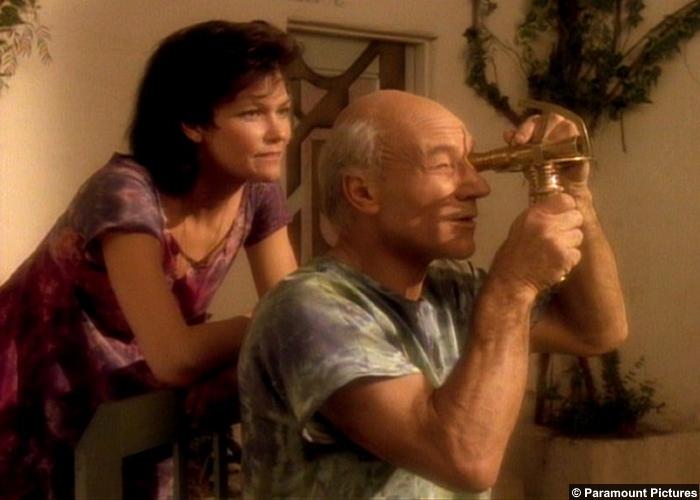 Speaking of versatile, here’s an episode as far removed from The Best of Both Worlds as any show can be. Whereas the Borg-centric two-parter was all about action and tension, this episode is introspective, quiet, moving and dramatic. The plot device that kicks off the episode-proper is really a prop: The Enterprise encounters an alien probe that “attacks” Cpt. Picard. While he lies on the bridge convulsing, the probe somehow links with his mind and downloads the data of its entire civilization into his brain. That’s the sci-fi part of the story. Again, it’s a means to an end. The real meat of the episode follows Picard as he assumes the role of Kamin. At first he insists that he’s Picard of the Enterprise but as years go on he accepts his life as Kamin, raises a family and lives a quiet life of ease on his planet. Essentially he lives a life—a whole life—that Cpt. Picard chose not to pursue in order to be a Starfleet officer.

The episode works because it takes its actors seriously. Patrick Stewart plays the role with the gravitas of a stage actor (which, of course he is). The slow pace of the episode gives the audience time to grow used to Picard-as-Kamin, to sympathize with him and follow his life’s journey. It turns out the planet is dying due to their sun’s radiation but unfortunately the people don’t have great space-faring technology. They have only just begun launching satellites. Eventually, as they near extinction, they devise a way to store the memory of their civilization into a probe that they will launch into space, in the hopes that it will encounter someone who can learn about their people, in order for them to live on in someone’s memory. That someone is Picard, who—as Kamin—finally understands his role in the world’s history. At that moment the probe stops “attacking” Picard who wakes up, fully aware of the entire experience, and the entire life he lived in the blink of an eye.

The Inner Light can’t be done justice by a couple paragraphs of summary. The episode needs to be seen to be appreciated. It won the Hugo award given to the best science fiction dramatic presentation and is hailed by fans as among the best episodes in the history of the franchise. It is TNG’s “The City on the Edge of Forever,” transcending its parent show to be something appreciated by non-fans as well.

After the success (largely) of the Original Series movies, it was a big gamble to take Star Trek in such a new direction, but The Next Generation—once it found its footing—thrived to become a beloved Science Fiction TV institution. The franchise is celebrating 50 years in 2016 and CBS is preparing to launch a new TV show next January. It would do well to remember the lessons learned from The Next Generation: A confident head writer, a willingness to explore the human condition with fresh story ideas, and on occasion, having a dash of action/adventure, can be the recipe for another great series.