After dragging us from one corner of the galaxy to the next, Discovery finally dropped something big at the close of the second season’s eighth episode: Michael is the key to finding (capturing? stopping? the show is frustratingly vague sometimes) the Red Angel. The tenth and eleventh episodes answer a crapton of questions, while simultaneously raising several new ones.

Setting that aside…are the episodes any good? Is this good television or is it hiding its mediocrity (at best) behind smoke & mirrors and the constant stringing-along of the audience? We’ve got only a handful of episodes left this season to find out… 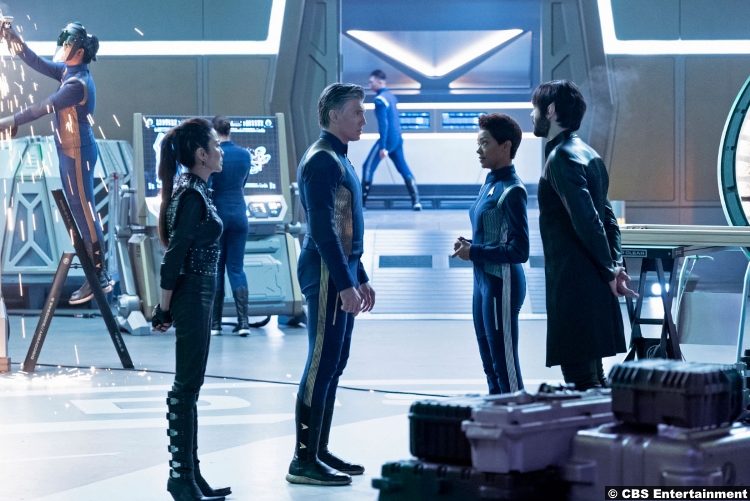 This episode is built entirely on the character of Michael. That’s no big surprise; no Star Trek show before Discovery has ever been so singularly focused on one member of the ship’s crew. But no episode of Discovery has so openly stated the show’s mission statement before this one: This is Michael Burnham’s show and it will live or die based on her.

We learn very early into the episode that the Red Angel is Michael. Its a revelation that comes so quickly and abruptly your first instinct is almost certainly not to react at all. It ought to be a humongous revelation; it is after all the biggest mystery of the season. To have it dropped so suddenly and so early on makes it almost certain to be a set-up for a twist.

Sure enough, it is: The end of the episode tells us that Michael’s…mom is the Red Angel.

It’s a shocker but only in the “gotcha! it was someone you never could have guessed!” sort of way, which really sucks the fun out of the mystery. As with every big surprise in Discovery, we’re left to “watch the next episode” to find out more, and then the “next” one, to find out more still, like we’re Hansel and Gretel scooping up sweets on the ground, merrily approaching the cozy little cottage at the end of the season, expecting the odd looking lady inside to give us all the answers when really she’s just going to shove us in her stone and cook us.

3/10 – Answers without resolution, questions without intrigue. 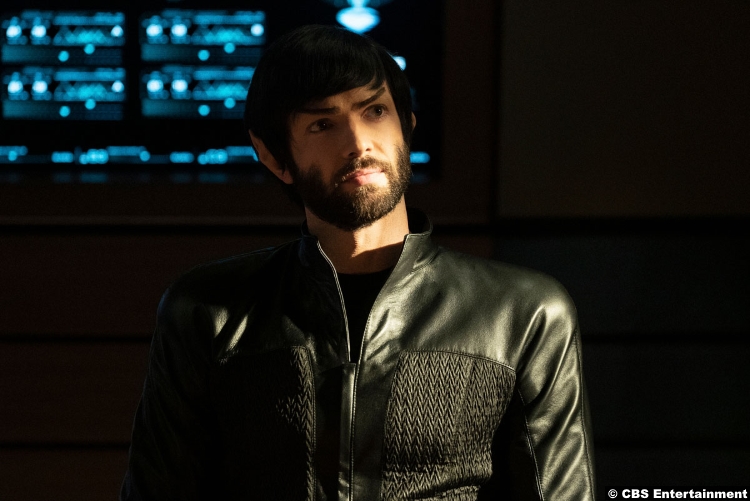 Ariam’s funeral was well done and would have been really impactful if I’d gotten to know the corpse before the hour of her death. I can’t help but ask: Did they really bring her back to the ship just to blast her back into space? I guess that’s what she really wanted.

Tilly with a sick burn on the Trek doors opening on their own. She remains my favorite.

Michael keeps talking about Ariam’s last words, as if they weren’t “AAAAaaahhhh” but whatever.

People keep treating Section 31 like it’s a perfectly normal branch of this peaceful utopian society when really it’s shadier than having the KGB openly operating out of the United Nations.

This episode had too many revelations coming in too short a time span. Within the space of an hour we learn that Michael is the Red Angel, that Section 31 made the Red Angel, that Michael’s parents were in Section 31, that Control has already taken over Section 31 (and seemingly-killed Captain Five O’Clock Shadow in the process) and that nope: Michael’s mom is actually the Red Angel. It was a flurry of questions being answered, some of which weren’t even asked until ten seconds before they were answered.

Maybe next time you want to do a season-long storyline, plan out your big revelations a little better so that you’re not just farting around for half the season before doing a cliffs notes version of the plot in the back half.

I don’t care if Time Crystals were name-dropped last season: They were stupid then and they’re stupid now. This isn’t Final Fantasy. You want to go back in time? You put in the coordinates, you sling shot around the sun and boom you’re in time warp.

Why is Spock dressed like a biker? If he was exonerated why isn’t he in a uniform?

Ariam’s replacement has no name. As is tradition.

Is Hugh the Doctor now or not? He scanned Michael early in the episode and later went on the mission like an officer. But in between, he’s dressed like a GQ model and balks at being called Doctor by Admiral What’shername. Pick a lane, bro.

The whole scene with Michael almost dying played worse than Ariam’s death precisely because I knew she wasn’t actually going to die (or at least stay dead).

Another problem I have: The Red Angel’s plan is to save the universe from extinction…and Discovery’s plan is to stop her from doing that? Wwwwwwwhy? 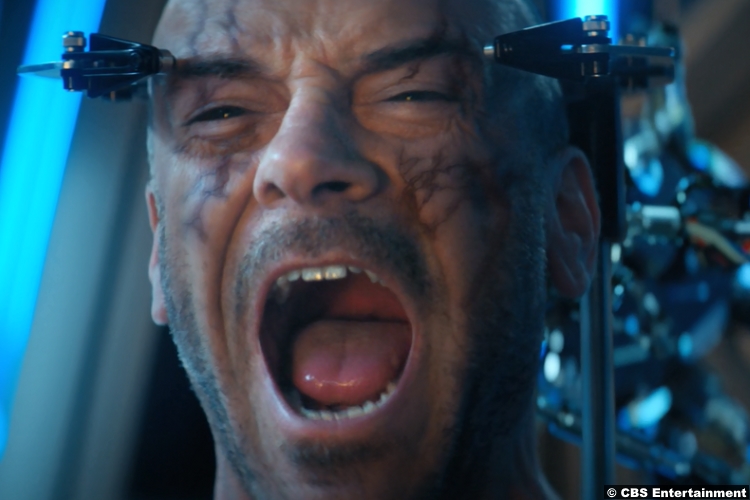 Halfway through the episode I wrote down a note: “Well-made nothing.” That about sums it up.

So about the Red Angel being Michael’s mom despite she and Michael being a near-exact genetic match: This episode tries to hand-wave that by saying, basically “it was too close to call” but I can’t shake the feeling that the season is going to end with a revelation that Michael is actually from the far far future and goes back in time to be her own mom or something. I dunno, I love Back to the Future but I hate this theory.

Last week’s episode suffered because there were too many “dramatic revelations!” coming too quickly. Take those away and there really was nothing else to the show. This week’s episode suffers in spite of the fact that it has a good pace, some good action, a few nice lines, and some old school Trek discussions on “what do we do and why?” It suffers in spite of those things because those things are just the bones; the actual meat on this body is the same dead flesh that’s been rotting for a few weeks now. The Red Angel storyline had promise but it has gone off the rails. As a result, every attempt to add more to the mythology of it, explain the mythology of it, or develop characters around the mythology of it fails from the word “go.”

Nothing else can be said until the end of the season when (hopefully) all the questions are answered and the whole fourteen-part story can be examined entirely.

6/10 – Enjoyable if you don’t think about it or pay too much attention…but is that really what we want Star Trek to be? Mindless fun? Mindless? 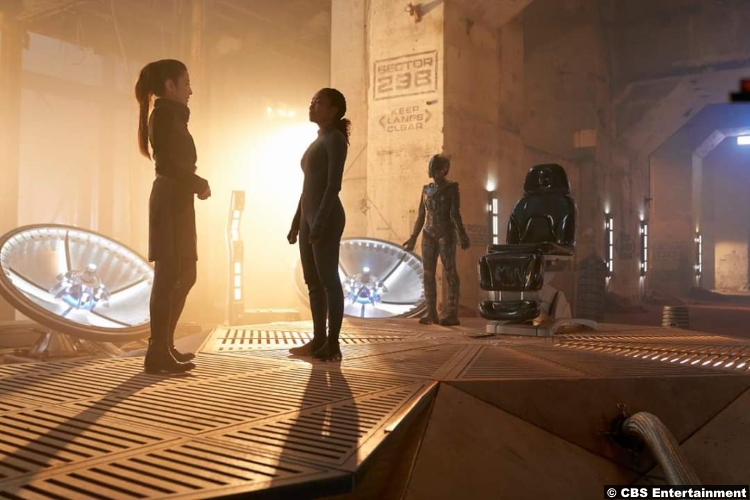 The flashback scene that opened the episode was well done; it worked where Ariam’s death didn’t because I know Michael and have watched her character utter more than ten words before seeing her traumatic experience.

Is Control a timey-wimey explanation for where the Borg came from? I hope not. It did say “Struggle is Pointless” (as in “Resistance is Futile”). Maybe it’s a head fake by the writers. I hope so; I don’t want nor do I need to know that the Borg were created by humans. That kind of ruins their introduction in “Q Who,” where they were meant to be a far-out unknown thing that the Enterprise-D wasn’t ready for. Making them OUR creation shrinks the universe a little too much. It’s too pat, too cute as a story idea. It also reinforces one of my biggest problems with the show: The writers have too much concern about the saga of the franchise, the mythos, the canon, the history of Trek; they’re refusing to go forward to let Discovery just be its own show.

In the midst of answering questions, the show raises a new one here: The Red Angel apparently didn’t create the signals the ship’s been following across the universe. So there’s another layer of questions for the final few episodes to answer.

I’ll say this in this week’s favor. The words “we’re playing tug of war with the universe and we have one hour until the universe wins” is one heck of a Star Trek line. I kinda wish it was said in an actual one-hour episode devoted to it and not just as a half-developed plot device to a larger story.

The episode builds to the moment when Michael and her Mom finally talk face to face, but the interaction is hindered by dialogue that dances too much around the facts simply because the writers don’t want to reveal too much too soon.

The roundtable dialogue scene where everyone was working out how to fix the sphere problem was good, classic Trek. It made me wish I was watching a different show entirely. One where the ship gets caught in some anomaly and they start playing tug of war with the universe and have to figure out a way to escape without (A) destroying the ship and (B) collapsing the universe.

If you’re keeping score we have six plot-lines that need to be resolved.

And there are only three episodes left.