Season four is the worst season of Vikings so far, but the events of Two Journey’s may change that. The first ten episodes at the start of the year were characterised by thin plots that would plod along for more episodes than they needed to before coming to fruition, but after this episode, which is the culmination of the show’s new direction, what once seemed like plodding is now seeming like great attention to detail. The small ways in which Ragnar destroyed his legend, Rollo’s predictable betrayal, Bjorn growing into the leader that his father could never truly be, and Lagertha’s need to retake her home, has been carefully constructed by Michael Hirst, that it is much easier to appreciate season four’s slower pace now that we are getting the payoff.

Two journeys seems like an incomplete title for this episode, as it deals with the journeys that many of the characters are still on, or the new ones to come. There are the literal journeys: Ragnar and Ivar in Wessex, Bjorn and Floki with Rollo, but there are also the symbolic journeys of Ragnar, Lagertha, and Rollo and the relationship these characters (who are the main three that we’ve been with since the beginning) with the gods.

Viking’s has had a weird relationship with spirituality. The first two seasons had a fine balance of Norse mythology coming up against Christian mythology and beliefs with Floki and Athelstan the two opposing figures.  Any visions the audience would see of each faith could be easily explained by the character who has seen them, by their state of mind. Floki is on the spectrum of mental illness, and Athelstan’s visions would always come at times of high stress and anguish. Season three made the spirituality manifest, breaking the boundaries of reality, giving the show an element of the supernatural that could be jarring. The first two season’s succeeded with this by making sure that what was important was that the characters believed it, which, in turn, made the mythology of the show stronger. Taking that barrier away means that the audience is forced to believe this, making Vikings a much different show.

Two Journeys reverts back to earlier seasons with its discussion of spirituality and destiny. Sure Asluag had a vision of Kattegat being overthrown, which did come true, but after Lagetha’s warning it’s something she could have predicted anyway, plus she doesn’t even see the child of her vision running in terror in reality, suggesting that director Sarah Harding, who needs to direct every future episode, repeated that shot for us. Instead of showing us the gods at work, the episode primarily shows each character trying to define their relationship with them. The gods, despite the warning vision, are on Lagertha’s side as her plan to take Kattegat proves successful. It’s great to see Katheryn Winnik in action again, a towering figure who uses her considerable real-life combat training to give Lagertha such an imposing quality. Credit again goes to director Sarah Harding whose tracking camera make Lagertha’s army are the human equivalent of the tidal wave that engulfs Kattegat in the opening credits. 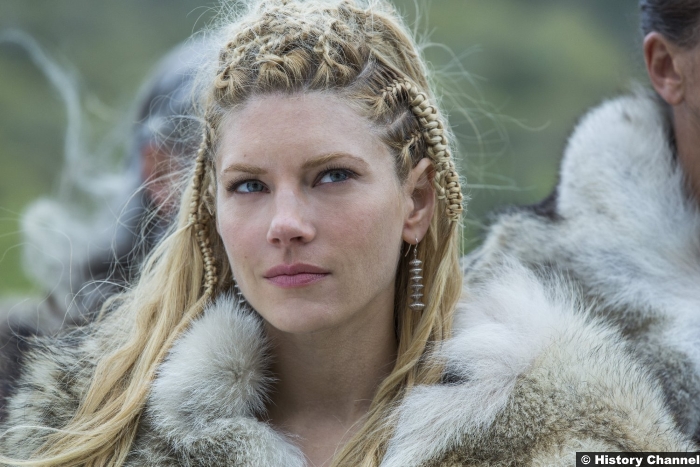 Ragnar and Ivar have made it to dry land (which is the kind of luck I’m ok with if it keeps these two bickering constantly), continuing Ragnar’s lucky streak which suggests the gods aren’t finished with him. As the two of them travel to their meeting with King Eggbert, Linus Roache gives good weary in his short return, Ivar tries to define his new view of his father based off of his legend. Ivar argues that Ragnar’s downfall is because he is out of favour with the gods, even Ragnar doesn’t think he will get into Valhalla when he dies, but Ivar’s prediction that if they are going the right way then the gods favour Ragnar is proved right, but, pivotally, still could have been luck. This is another excellent episode from Travis Fimmel and Alex Høgh. Alex Høgh’s physical performance does a lot to make Ivar both sympathetic and formidable. The lightness of his treatment from his fellow Vikings proves to be their undoing. With Ragnar’s plan to murder his companions he has in Ivar the perfect weapon. The way Ivar crawls along the ground, his natural habitat after all, gives him the edge in these surprise attacks. Yet it is also used so he and Ragnar can hide in plain sight as “an old man and a cripple”. 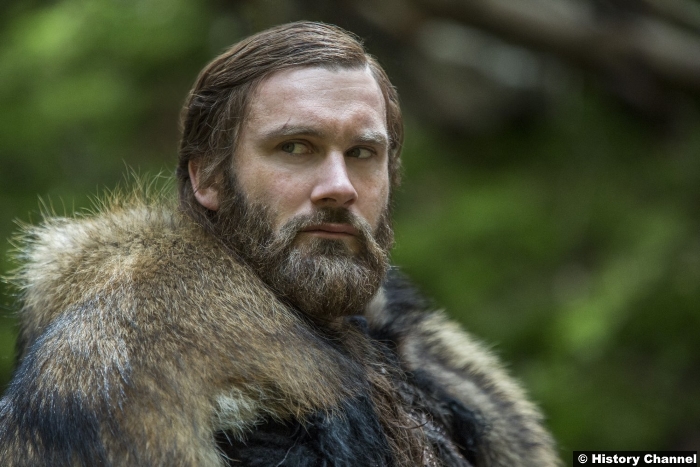 Two Journeys sees the return of everyone’s favourite traitor, Rollo. The last we saw of Rollo he was enjoying his new life of French royalty, and successfully defeating his younger brother in battle. The years haven’t been kind, and Clive Standen’s look of a frustrated father in the suburbs speaks volumes while also tapping into his comic chops. He’s in luck though, as Bjorn and Floki need his protection so they can reach the Mediterranean Sea. Rollo agrees, with one non-negotiable condition: that he comes along for the ride. Try as he might Rollo cannot deny the Viking part of himself, as he states to his distraught with, when he hears thunder it isn’t just thunder, but Thor smashing his great hammer. Again, his connection to his old life is brought forth by a symbol of the gods. Vikings has its cake and eats it here as Bjorn decides to kill Rollo in an act that seems to mock his previous baptism. It’s a great scene, and with Standen’s upcoming role in Taken, it would have been a way of tying his plot up. Instead Bjorn, and Hirst know that there are more interesting possibilities when you keep someone alive that it would be easier to kill. That’s what the show has been doing with Ragnar all season after all.

9/10 The second half of season four finally comes into focus in an episode of great action, and intriguing alliances. Vikings finally has its groove back so it’s only a matter of time before we hear those two amazing words: SHIELD WALL!