Vikings S04E14: In the Uncertain Hour Before the Morning – Those that gain knowledge also gain sorrow

A lot of the time in television the set up is better than the pay-off. Anyone who kept up with the last series of Doctor Who, in which most of the plots were split into two, will know that the first episodes of these stories were packed with promise, then the second part would usually disappoint. Vikings latest episode, the follow up from last week’s stunning return to form, doesn’t suffer from this problem. Last week was all enticing set-up, bringing characters together that hate each other, or hate each other and haven’t seen them in years. It was enough to make us expect some fireworks from “In the Uncertain Hour Before the Morning”, and there was, just not the fireworks that I expected.

It’s incredibly tempting to make this entire review about the reunion between King Ecbert and Ragnar, so powerful was that story that it out shone a major character death, which itself was the result of a hostile takeover. So let’s get the events of Kattegat out of the way first. Lagertha is officially ruler of Kattegat once again, with the seer’s murky prophecy from the beginning of season three seemingly coming to fruition, as hinted by their knowing looks at each other as Asslaug’s body burns. It’s a genuine moment of triumph for Lagertha, and no one seems too bothered by this takeover, maybe they always liked her better. Of course the main event of this plot is Lagertha’s murder of her rival: the woman who took her husband, her life, and her happiness. It’s interesting that Lagertha only holds Aslaug accountable in this moment, saying that she bewitched Ragnar, which is only metaphorically true. Her decision to shoot Aslaug in the back, rather than being cowardly, is her way of balancing the scale: her life was taken when her back was turned and she is repaying that attack in kind. That she left both Ubbe and Sigrid alive promises even more headaches in the future when Bjorn returns. 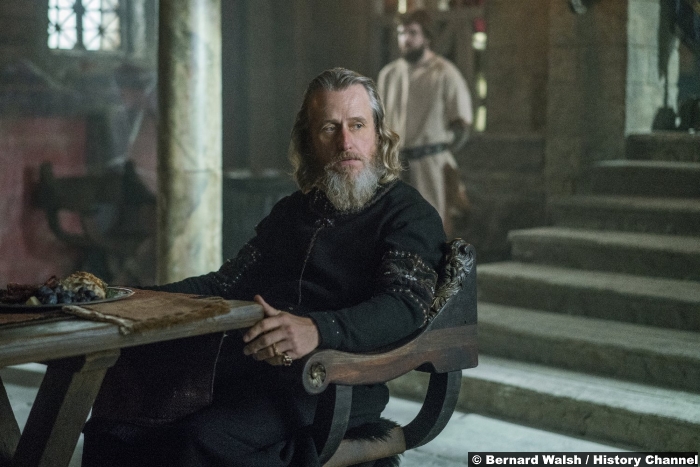 Now to the main event, which was always going to be a conversation. Think about it, it was never Ragnar’s plan to get bloody revenge on Ecbert himself, not with a thinly made group of fighters, who he may have always planned to kill, but instead use himself and his reputation as leverage. After all, Ragnar is the name that strikes terror into the hearts of all Saxon’s, and the news of his death will bring his sons across the sea to wreak havoc on Ecbert’s kingdom. It’s all going to plan, Ecbert’s son immediately cages Ragnar, gloating at his own sense of power, until, day’s later Ecbert returns, banishing his son from their coming conversation, slyly grinning at Ragnar, his old ally, asking what took him so long.

From here it’s an episode of contrasts. Two kings on either side of the table, one who has achieved all he ever wanted, and the other beaten, dirty, caged, but also feared. Showrunner Michael Hirst may have outdone himself with the scenes between the two kings, as it almost has the air of a pub conversation. Take away the period detail, the grime, and the fact that one of them is in a cage, and it could almost be two friends that haven’t seen each other in years, reminiscing over old times with many drinks, and like all all-night drinking sessions they start to talk about religion. Don’t get me wrong, I don’t mean to trivialise these scenes, but it is clever of Hirst, with the context of master and prisoner that the barriers between the two are only physical.

Of course they start of antagonistic, Ecbert is reminded of his betrayal of the agreement that he and Ragnar put in place. The guilt lies heavy on him, but the result of this betrayal united many small kingdoms under Ecbert’s banner, calming an entire nation, and giving them strength to fight off anyone (specifically Vikings) that come to take what is theirs. It was an ugly act that was part of a larger strategy, and the kind of decision that proves that Ecbert is a more suitable ruler that Ragnar. Ecbert’s thirst for knowledge co-existed with his thirst for power; he like power because it allows him to do good things, but he proves that you cannot rule without getting your hands dirty. Ragnar, in stark contrast, was forced into the position of ruler, putting him into the arena where men like Ecbert have more experience. He became ruler of Kattegat because he didn’t want to die, and the power that it brought him facilitated his own thirst for knowledge. Now all Ragnar wants is to die, claiming that Ecbert is the man who is supposed to kill him. 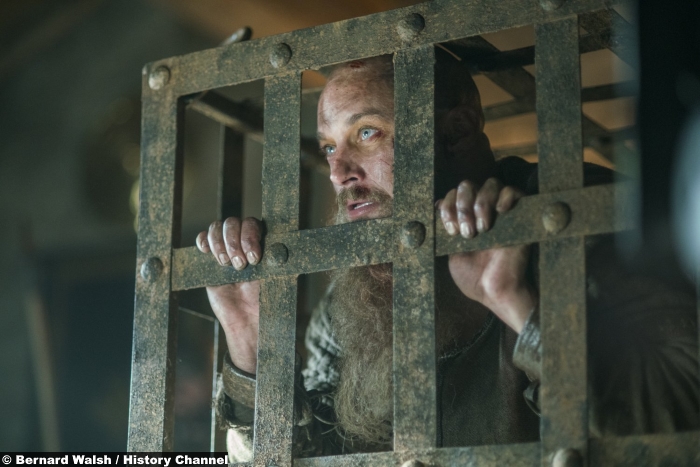 The problem is that Ecbert and Ragnar always had a strong connection, a respect that great men have that can often be confused for friendship, but they also have Athelstan between them. Athelstan had a deep effect on both men, and both men loved him more than anyone else. Ecbert’s disgust at the news of Floki’s murder of Athelstan, as he sees it that the monk died at the hands of Ragnars gods (rubber-stamping Floki as a stand-in for the spiritual), is rebuked by Ragnar who counters that Floki did it out of jealousy, a decidedly human motive. That connection proves too strong, as Ecbert cannot grant Ragnar his death wish: “my friend I’d rather let you go free”. This leads to Ragnar, who is as good an improviser as Ecbert is a planner, modifies his scheme to benefit Ecbert: revenge will be taken on England, but Ecbert’s patch will be spared. You can almost hear Athelstan whispering to them both: “Mercy”.

9/10 Vikings continues to impress, with fantastic performances, especially from Travis Fimmel and Linus Roache, and a confidence in its season-long arc that is finally reaping some rewards for us, the viewers.,