Vikings S04E19: On the Eve – Vikings raises its game by one and a half battles

Sometimes I think I’m really hard to please. I never used to be this way, not until a media class in college started to breakdown the rules of Television and film, a class that started me on the prestigious road of reviewing TV for money (ask anyone who does it, it’s a great job). That’s why the last few weeks of Vikings have been so frustrating with so many flimsy plots, muddled characterisation, and as many fans of the show have noticed, making Lagertha look like a bloody idiot. That started to change when last week’s episode went to England. From Aethelwulf and Eckbert’s conversation to King Aelle’s blood eagle, the show had a little bit more focus. Which brings us to On the Eve: an episode that makes me think that sometimes I’m really easy to please since any Vikings episode that has more action and less plot nonsense is going to score higher than the opposite.

It’s not a classic episode mainly due to the fact that plots that aren’t interesting: Floki and Helga’s for example, still aren’t interesting. Every week I have to decide what to talk about first, the episodes good points, or bad points. This week seems like a no-brainer, let’s get the crap out the way so we can enjoy the bloodshed.

The aforementioned Floki/Helga adoption plot continues to be a head scratcher which in itself is nothing new for a Floki plot (do we all remember his sexy time visions with Asslaug from the first part of season four?) So their adopted daughter runs away during the night but by morning has only managed to run a few feet from the end of the encampment before Floki finds her again and brings her back to Helga. Do you know what we call that? Padding the script is what. Then there’s the culmination of year of misguided lust on the part of King Harold, whose name I’ve been getting wrong all of this time, could it be that when I looked up his name to confirm what it was that the mere sight of it gave me boredom-induced double vision? So Harold forgives his beloved for marrying another man in the only way he knows how: sticking an axe in her husband’s head, dick move Harold. Not only that but the fact that this poor woman could have been plotting revenge against him only occurs to his much more interesting brother who saves his life by, well, having a brain in his head. I did think that their plan to overthrow Lagertha would have happened after they came back from England, and could command bigger forces to take the city, but I was pleasantly surprised when the attempt on Kattegat appeared in this episode. 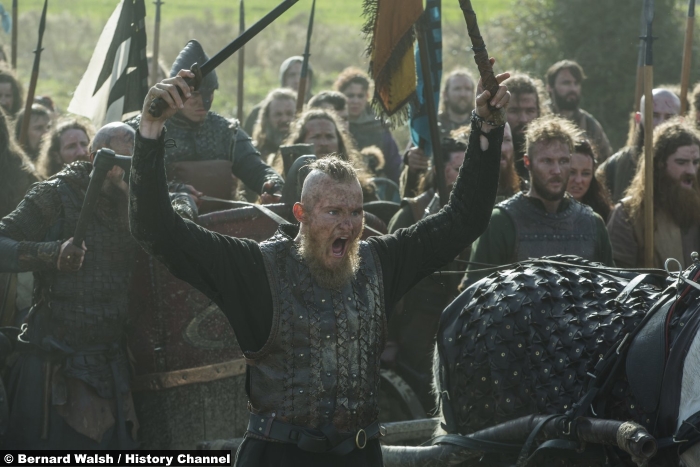 Which means now we can talk about the episodes strengths. Vikings is a terrific show when it comes to action set pieces. There’s a reason “SHIELD WALL!” is such a popular catchphrase amongst the fandom. The action scenes are always impressive and distinctive from the last. Arguably series three has the best scenes with the early battle for Mercia, and the attack on Paris easily rivalling anything Game of Thrones can offer with a fraction of the budget. There’s a fluidity to the attack on Kattegat that is reminiscent of when Lagertha took control in the first place. Most importantly though it’s refreshing to see a defence being led, and won, by women. Vikings has never been outspoken with its treatment of women and Margarete aside, the show does well by its female characters by normalising their role in society. Like the Star Wars universe the presence of female warriors is highlighted because it shouldn’t need to be. It’s up to Lagertha, and to a lesser extent Astrid, to be a focal point for this representation: meaning that the sight of both characters skilfully cutting through a mass of enemies, and in the episodes most creative moment, burning them alive. It’s impressive, not because they’re women, but because they are formidable warriors. Well, accept for Bjorn’s wife. What’s really important here is that by Lagertha defeating this threat, the first real threat to her rule, the show doesn’t betray her competency. 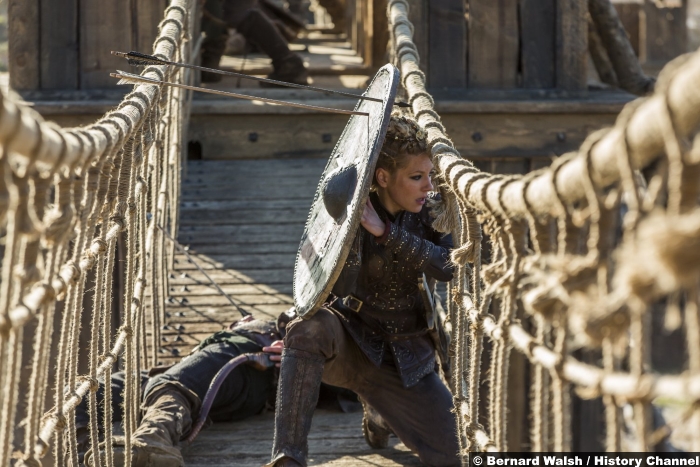 Speaking of competency, Ivar really came through for Bjorn and co, and when Floki of all people calls you a mad genius you know it’s true. The battle of the sons of Ragnar vs the son of Eckbert is only halfway through but the first half was incredible. The way that this show can keep evolving its action sequences continually makes it the right show to portray one of history’s most distinctive warriors. The best battles are thematic in themselves, the tactics say a lot about the characters carrying them out. So when Ivar suggests that the Vikings try something a little different this is him as a character making his mythic presence in battle felt for the first time. Part of Ivar’s legend is that he was a brilliant tactician, because being the smartest person in battle is just as important as being the best warrior. The fact that Bjorn recognises the potential of Ivar’s pan does a lot to bring the brothers together in bringing their father’s justice. Before the battle their relationship was a tense thing with each personality making itself heard, to the point where Floki called them a bunch of blind fools in the only way he can, weirdly. Can Floki just be the shows Greek chorus, because he’s really good at it?

7/10 – The break in the battle does make the episode frustratingly incomplete, but On the Eve is a table setting episode of the best kind: it furthers the plot along, something that has been missing since Ragnar’s death.